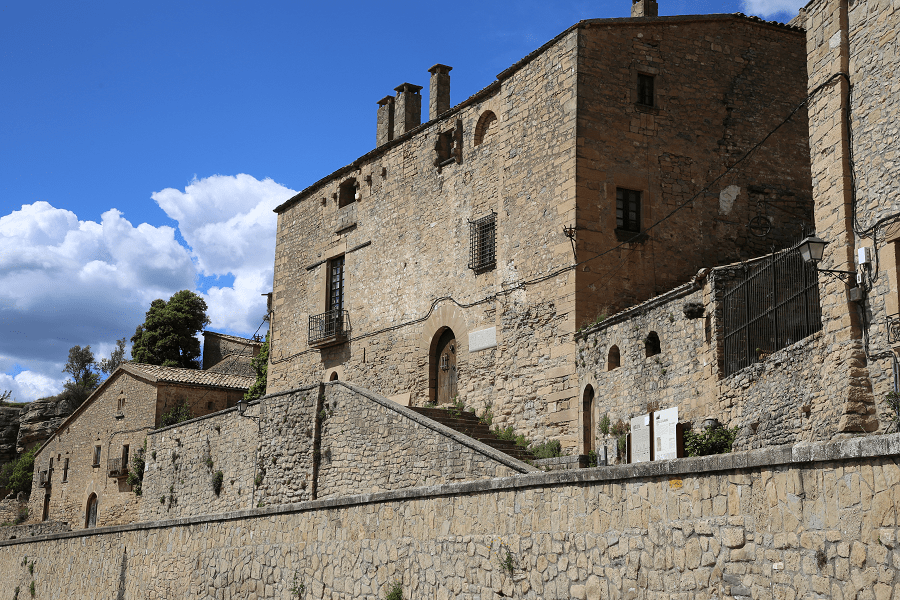 Talamanca is a city (village) in Spain, head of the municipality of the same name, in the Bages region, Catalonia. The town has narrow sloping streets, and well restored old houses. Situated on a hill at 552 m above sea level and in the middle of the Sierra de Rossinyol on the BV-1221 road from Terrassa to Navarcles.

Although remains of an Iberian site have been found, the first written record is from 960, when Count Sala, founder of the monastery of Sant Benet de Bages, donated land and houses in the territory of the castle of Talamanca. 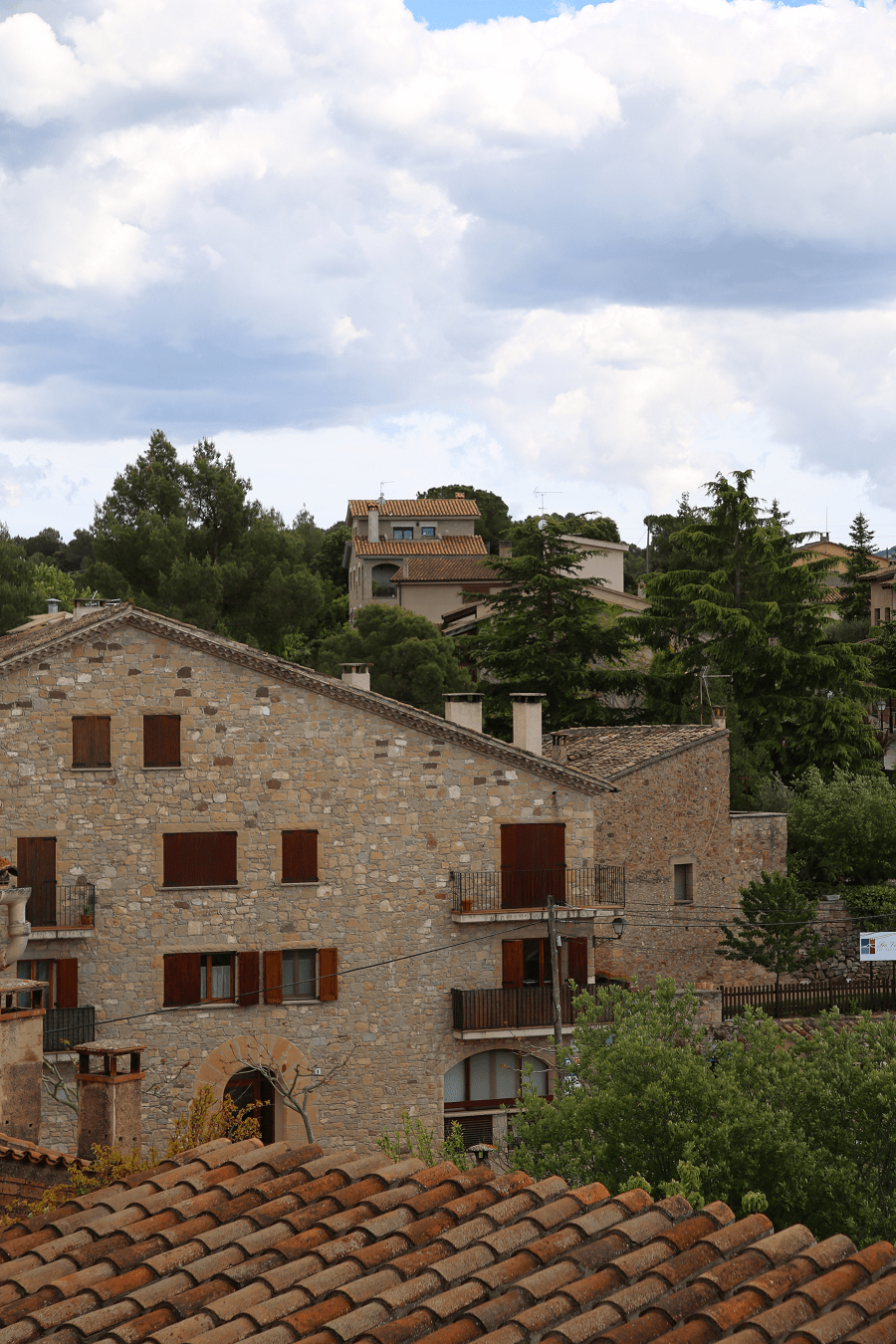 With Saracen invasions (711-715), the Bages had almost completely depopulated, and it was not until the repopulations carried out by the Counts Borrell d’Osona (799-820) and Guifré el Pelós (878-897) that peasants from the north settled around castles and churches looking for the double military and spiritual protection. 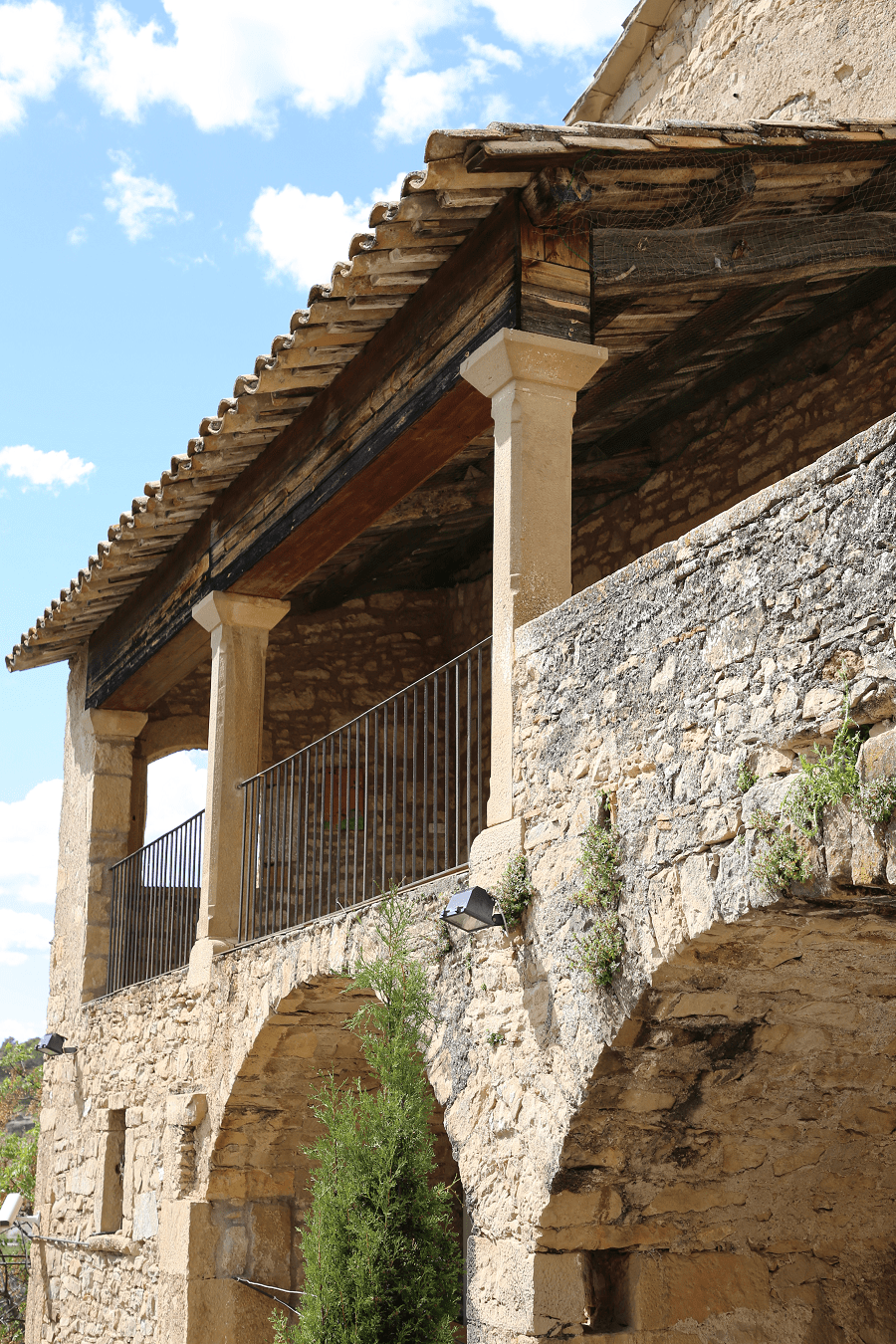 At the end of the 12th century, the feudal domain of the castle of Talamanca passed into the hands of Talamanca lineage, which was linked to the history of the town during the entire Middle Ages and began with Bernat de Talamanca and his wife Dulça (1186- 1209). The Talamanca were the owners and lords of the whole territory. As lords they bought, sold and granted farms in allod, not only the land but also the men, who were sold all in the same lot. 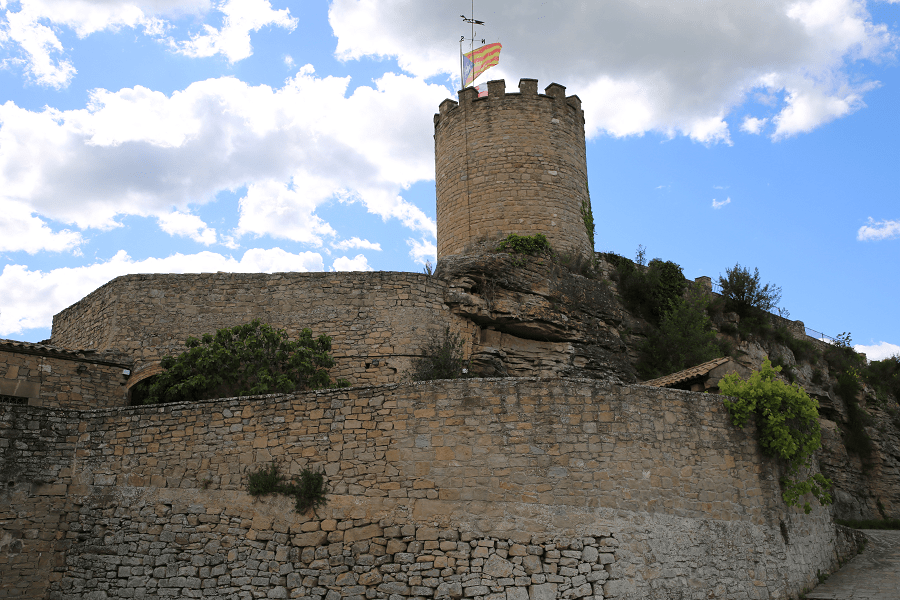 Later, the Talamanca began to establish relationships with the small nobility from Bages and the surrounding castles, and thus became associated with the Santa Coloma or Llavinera. An example of the prototype of the lord and feudal knight was Berenguer de Talamanca. He awarded honors, donated and participated in acts of violence against Guillem de Calders, in which even King James the Just had to intervene. In 1325 his wife Blanca erected a sarcophagus that we can still admire inside the church of Santa Maria. The mausoleum has a lying knight, dressed in a mesh armor with a dog on his feet and a funeral inscription between six shields of the lineage, with heraldry of silver and synople leaflets. In those years, the Calders family went into crisis and in 1336 the castle of Calders was sold to the Talamanca family. 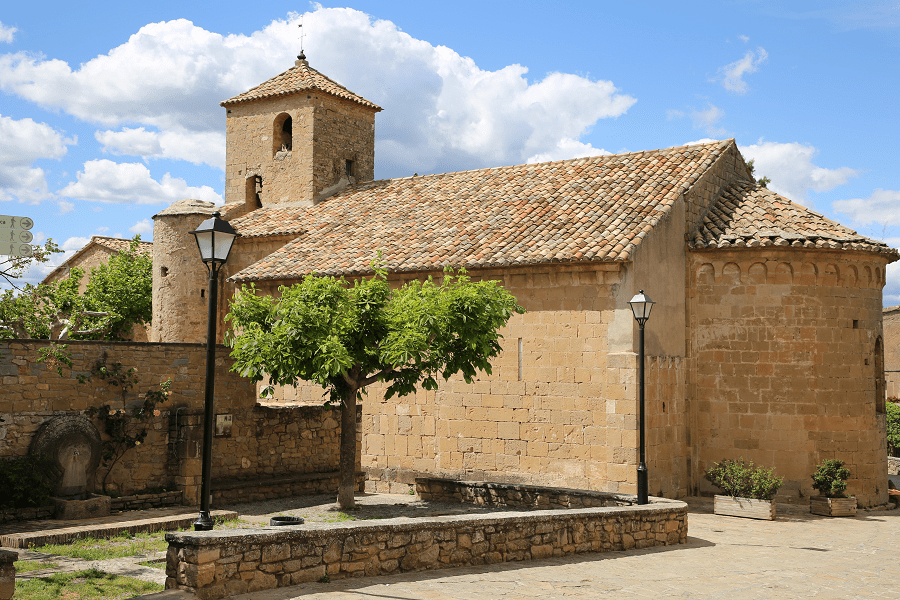 From the middle of the 14th century, with the great crisis of feudalism, the decline of Talamanca began, coinciding with the ravages caused by black plague and the evil customs on the farms. The Talamanca then came into contact with other families, such as the Planella (1675), the Eimeric or Aymerich, and finally, in the 18th century, the castle passed into the hands of the Marquises of Castellbell. 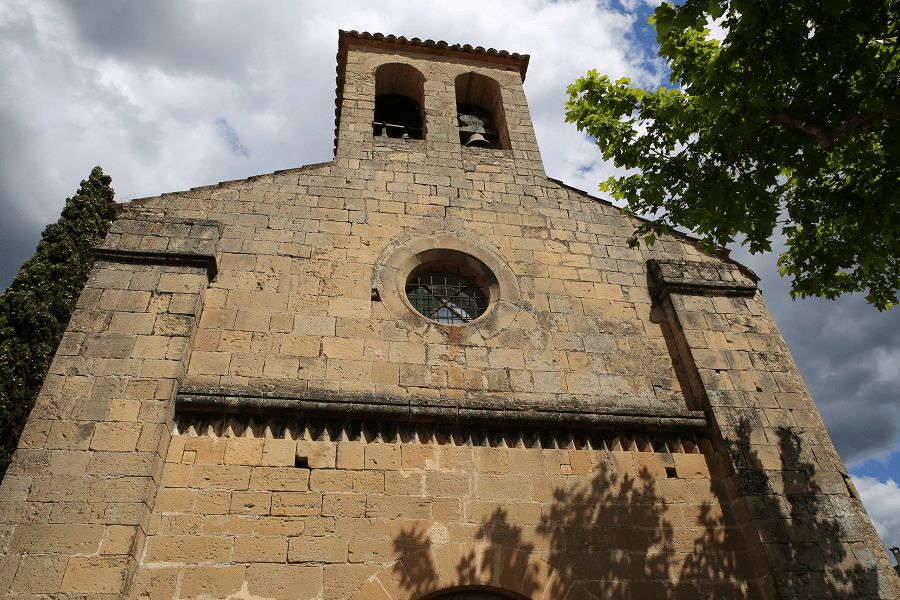 In the area of the municipality between the town and the range of Mussarra, between 13 and 14 of August of 1714, the battle of Talamanca took place, between the Austrians, under the orders of the Marquis of Poal, and the bourbons, led by the Count of Montemar. This episode of the War of Succession was the last success of the Austrians in Catalonia, before the final capitulations of Barcelona and Cardona during the following month of September.

Tourism, sights and what to see?

Santa Maria de Talamanca is a Romanesque church in the municipality of Talamanca (Bages), included in the Inventory of the Architectural Heritage of Catalonia. 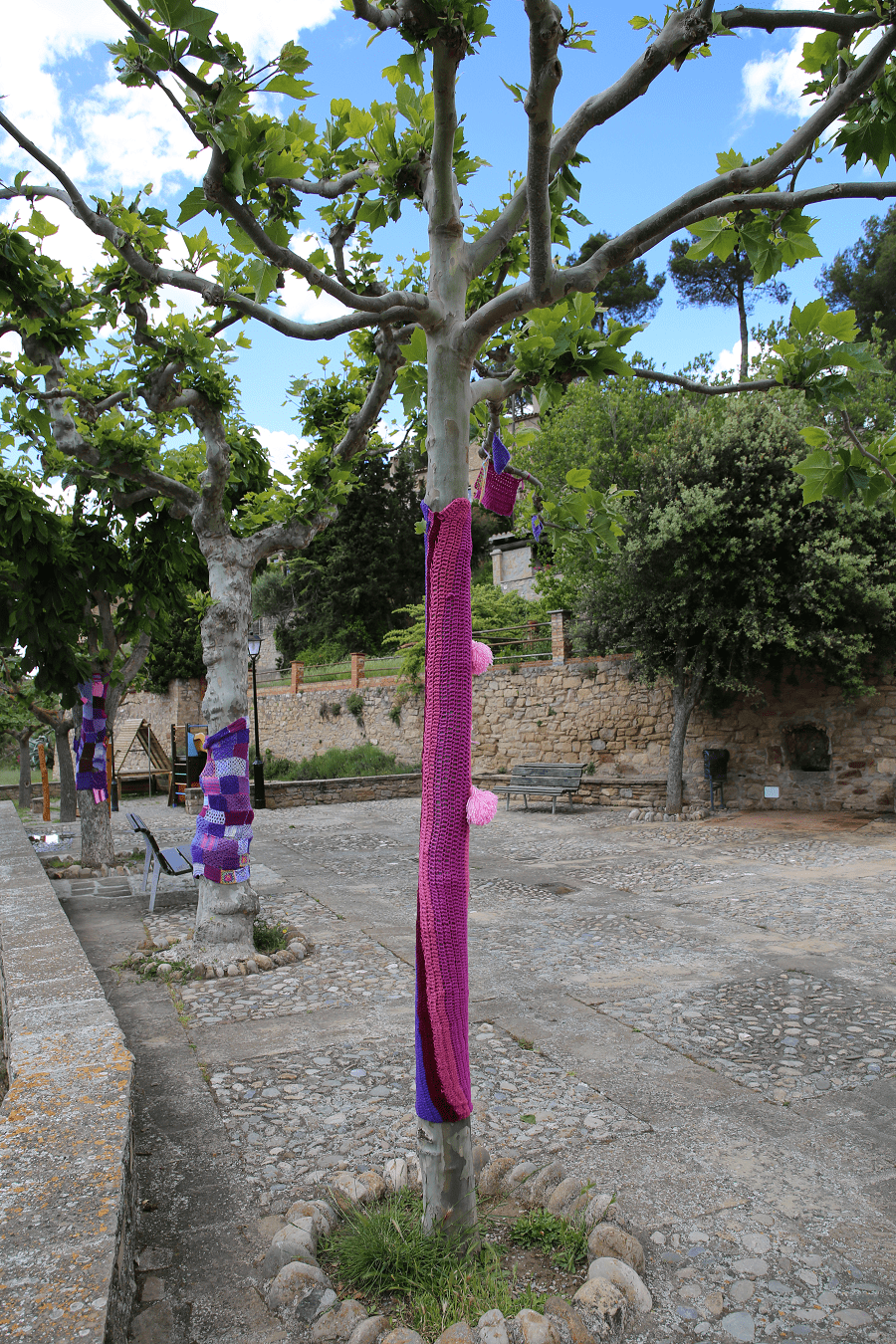 It is a Romanesque building from the end of the 12th century. Originally it had a single nave of Latin cross. It was extended with two chapels so that the church took a form of basilica with three naves. A semicircular apse closes the building on the eastern corner. The main nave is covered with a barrel vault reinforced with double arches. The apse is covered with quarter sphere vault and ornamented with blind arcs and triple arcade window.

The construction is made from well-carved ashlars, arranged in rows. On the corners of the building there are buttresses that strengthen the church. It has a bell tower, although originally it had a bell-gable. The exterior decoration is very simple, worth highlighting are the portal with the capitals decorated with vegetal motifs and the apse. The portal is simple, solemn and elegant. 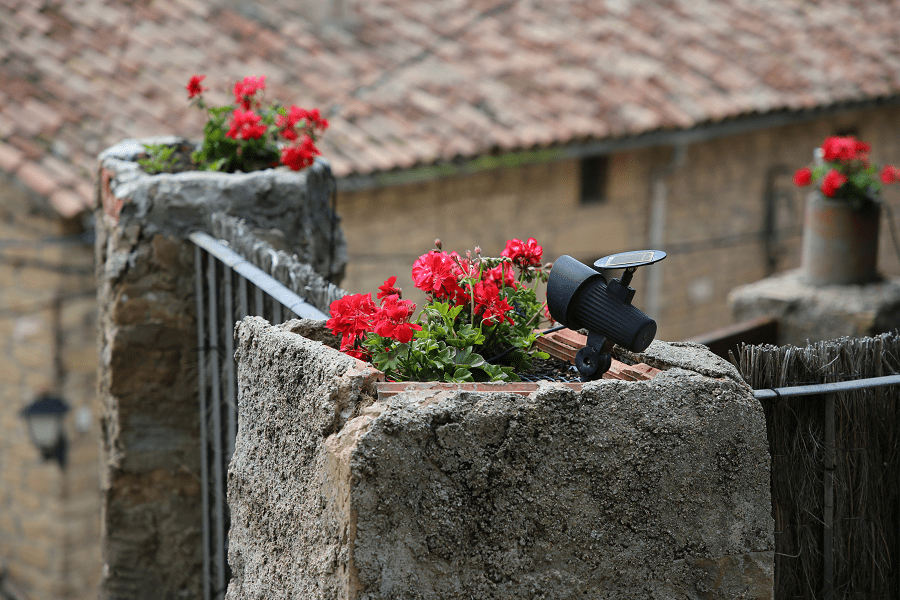 Structured with double semicircular vaulted arch in degradation. It is worth to mention, between the two arches, an archivolt worked with intertwined wicker that lays on smooth columns that have bases and capitals decorated with vegetal motifs. The capitals also have leaves ornaments, the right capital has two levels of leaves and scrolls that curve to the outside.The capital on the left, despite having the same theme, does not have the same flexibility as the previous one, the leaves on the first row are not curved to the outside and the upper ones do so very slightly. 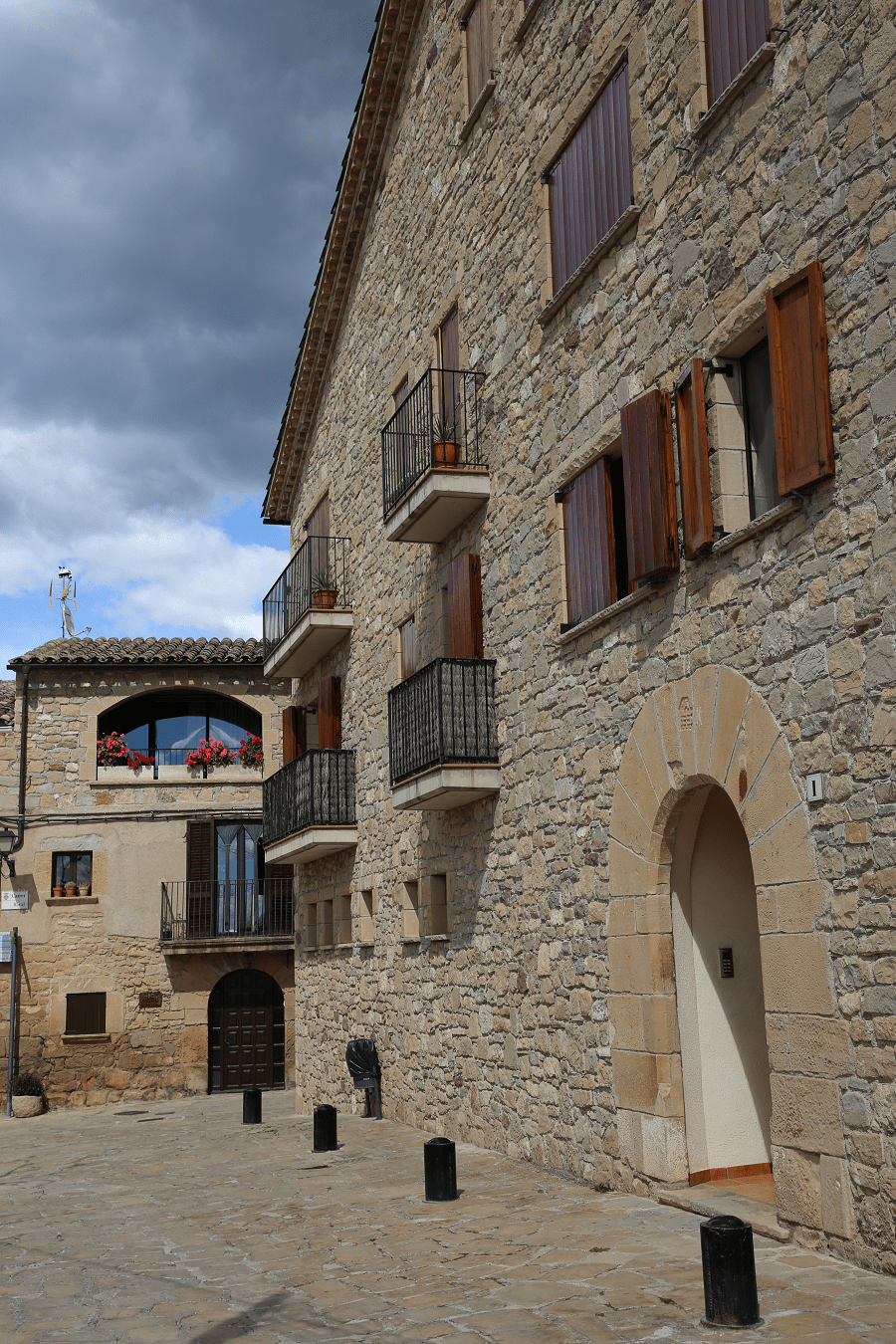 In the interior, stands out the cover with semicircular vault reinforced with two double arcs of the central nave. The tomb of Berenguer de Talamanca is located inside an arcosolium at the crossing of the temple. It is necessary to differentiate two parts of the tomb: the vessel where there are the remains and the lid. The vessel in the front has six gothic shields hung by a belt, with family symbols, except the middle one which has a funeral inscription.

On the double-sided lid, we find the lying statue of the deceased. The head rests on a pillow and feet on a small animal, dressed in a fine mid-leg length tunic and a slightly shorter chain mail. His arms are crossed on the stomach wrapping the knight’s sword and he holds the shield in his hand. Only an oval face with closed eyes remains in the open, in an attitude of eternal rest. 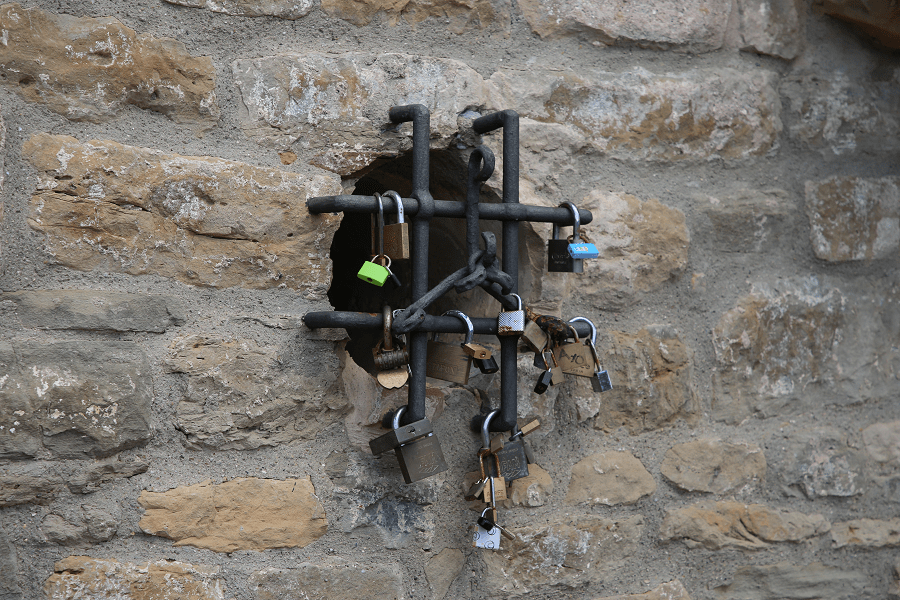 In the 18th century enlargements were made, so that the church from one nave went on to have three, although the side ones are shorter. The chapels of Roser, Sant Joan and Sant Isidre were added at that time.

When it comes to the portal, comparison of the capital on the left with some of the Estany’s cloister allows us to confirm the dating to the last quarter of the 12th century, which can perfectly coincide with that of 1183, the year of the consecration of the temple.

Berenguer de Talamanca belonged to the family of the Knights of Talamanca, documented since the 12th century. He died in 1325 and his wife Blanca had the tomb built for him in the interior of the church. 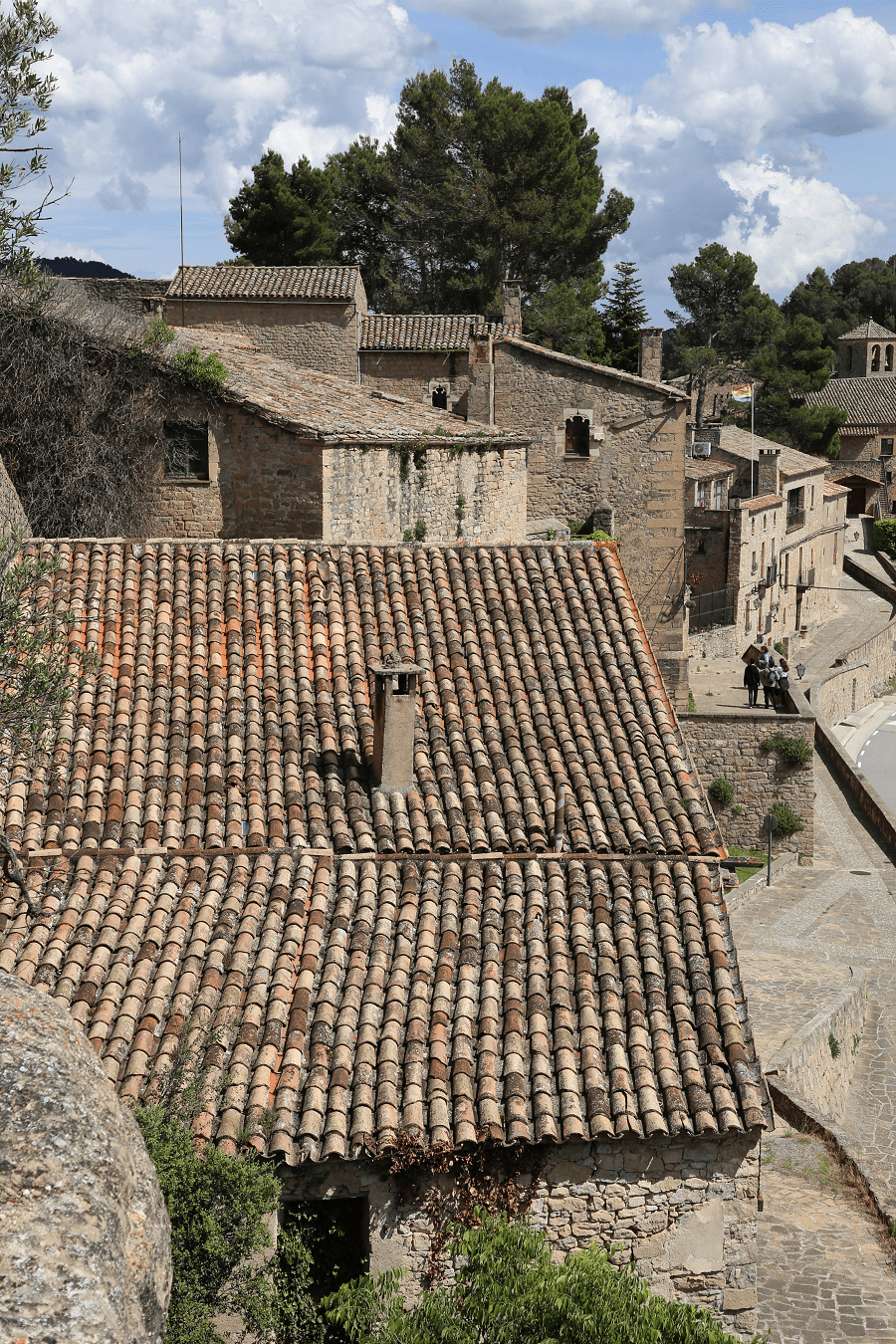 There are only two restaurants in the city: Restaurante Cal Ros, Les Voltes de Talamanca

Shopping in Talamanca is not a priority on the tourist program. Only on weekends small city bazaars and fairs, which traditionally take place on weekends or on some public holidays in the main square, can be of tourist interest. At the fairs, in particular, you can come across exclusive products grown in the region. Among them are some well-known wine and cheese brands in Spain. 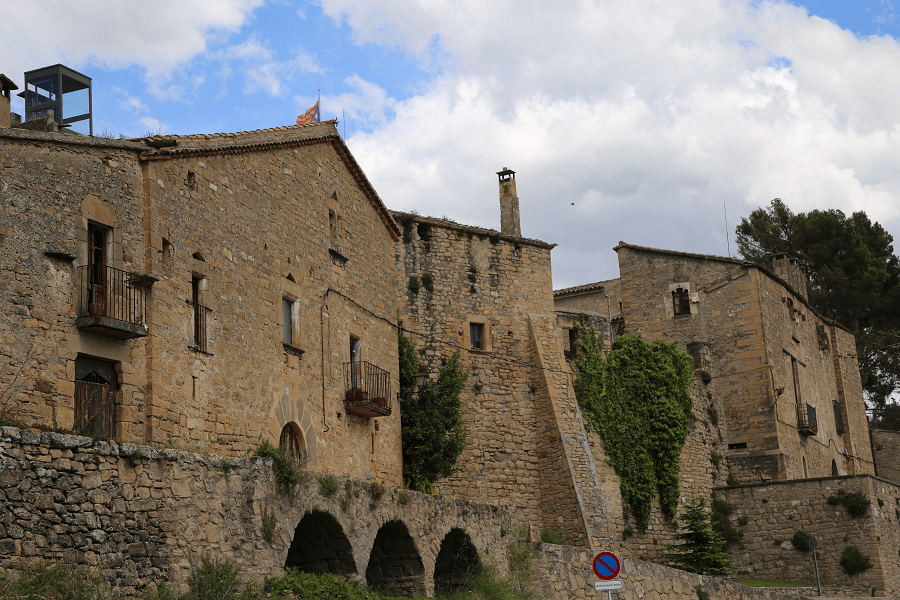 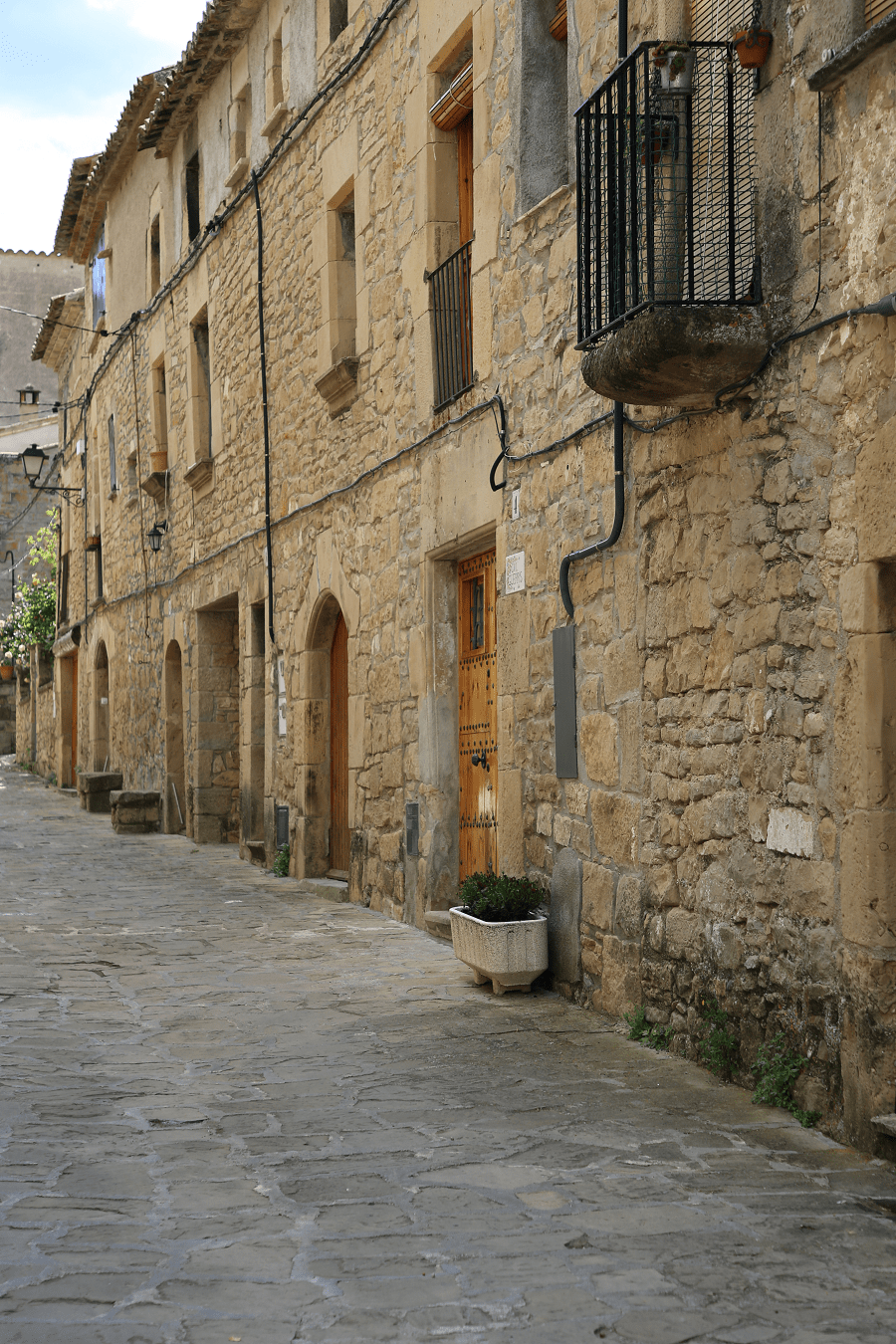