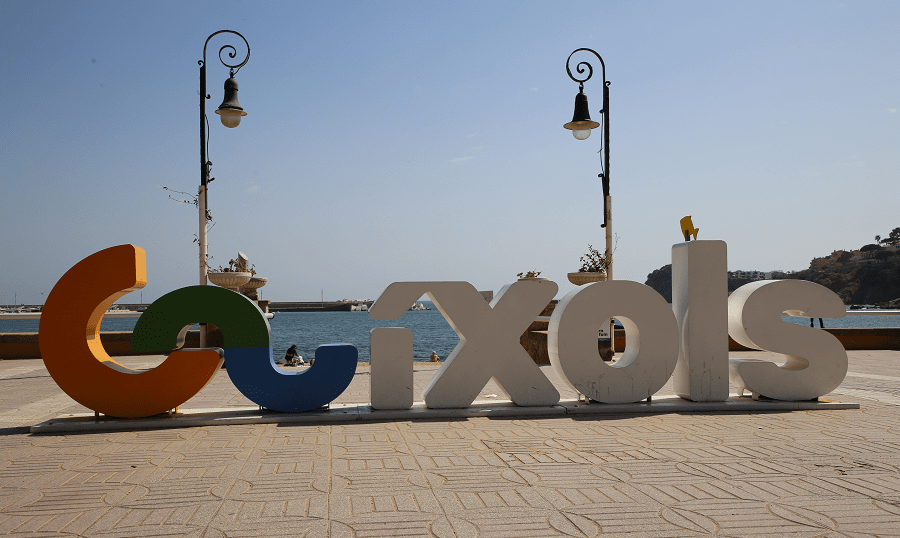 The city is located in the center of the Costa Brava, between the municipalities of Castel Playa d’Aro and Santa Cristina d’Aro. It is traditionally considered the capital of the Costa Brava. This definition of the city was given by Ferran Agullo. Ferran Agulló i Vidal was a journalist, poet, gastronomer and politician belonging to the Regional League of Catalonia.

The city center is located in the bay of Sant Feliu, between the hills of Sant Elm and Le Fork. The climate here is Mediterranean and mild all year round. It is an important tourist enclave due to its status as a green seaside city.

The oldest available data indicate the existence of primitive people in or around San Feliu more than 12,000 years ago. A set of tools cut from Paleolithic stone was found near the present monastery of Ribot. The second mention of human communities dates back to the Neolithic era. Graves and several pieces of flint have been found in the Vilartege area. In the late Neolithic and during the Eneolithic (2200-1800 BC), some human communities lived in the neighboring mountains. Several funerary monuments have survived (dolmens and menhirs, the most famous of which is the Daina Cave in Romagna de la Selva).

The city of Sant Feliu was one of the most important centers of the cork bark industry in the Baix Empordà region, and until the crisis of the 1930s this was the dominant economic activity.

With the beginning of the development of the region’s tourism sector at the end of the Franco regime, Sant Feliu did not fully join mass tourism, as did its neighboring towns of Playa de Aro or Tossa de Mar. This meant that the city did not have a definite and stable economic project, which, however, helped to preserve the maritime and traditional character of the city. However, the industry eventually closed down and Sant Feliu turned to tourism as its main economic activity.

Pedralta is one of the largest swinging stones (also known as logan stones or logans) in Europe. Nearby there is a small hermitage dedicated to the Assumption of the Virgin. It is located between the municipalities of Santa Cristina d’Aro and Sant Feliu.

Until the nineteenth century, the monastery was the most imposing building, fortified and isolated from the city. The walled complex consisted of thirteen towers, of which only two remain today. The main building of the monastery dates back to the eighteenth century and was erected in the late Baroque style, modestly, but with luxurious elements such as the two portals of the entrance to the complex. Today the most valuable part is the porch adjacent to the fencing church: Porta ferrata. It is part of a 9th century monastery with three horseshoe-shaped arches.

Finally, the church was built in the ninth century and expanded consistently, especially in the fourteenth and fifteenth centuries, in the Gothic style.

Today the monastery houses the historical museum of the city.

Paseo del Mar and del Guíxols (cat. El passeig del Mar i dels Guíxols). Opened in 1833 between the old medieval town and Hanson Beach, this large urban space, organized as a banana-lined promenade, was gradually filled with stately houses that replaced old medieval fishing huts. Today, real estate speculation has destroyed most of the old mansions, and the bourgeois waterfront shape has become the axis of residential buildings for the standard tourist coastal town.

Casino Constance (cat. El “Casino dels Nois or” La Constància “) is a gambling establishment located in a modernist building, better known by the nickname Casino dels Nois, as opposed to a competing, more bourgeois establishment – the gentlemen’s casino (officially Casino Guixolenc) The casino building was built by the architect General Guitar i Lostalo in 1888.

House Patxot (cat. La Casa Patxot). This house, located at Passeig del Mar, 40, was built by the wealthy industrialist Rafael Patxot between 1917 and 1920 by the architect Albert Juan i Torner. It is the most important and luxurious surviving manor house in the city. For a long time, the house housed the astronomical observatory of Patxot himself. Currently, it houses the Chamber of Commerce and Industry of Sant Feliu de Guixols.

Town Hall (cat. L’ajuntament). Built in 1547 in austere and late Gothic style, the city council has survived all the destruction of the war and real estate speculation. The current building has a tower built in 1847 and a later extension from the 1940s and 1950s.

Old train station (cat. L’antiga estació de tren). This station on the San Feliu-Girona railway line was built between 1889 and 1892 by the architects Rafael Coderch and Gabriel March in a strict industrial neoclassical style. The line was closed in 1969. Today it houses a public school.

The Museum of Cava and Champagne (cat. Museu de les Plaques de Cava i Champagne) is managed by the Josep Albo Foundation;

Via Ferrata Cala del Molí (cat. Cala del Molí). This route is the only one in all of Europe that looms over the sea, and is part of a package of work carried out by Albert Girones, a high-altitude park builder and professional mountain guide. Among his works are the via ferrata routes in the gorges of Salenis (Romagna) and Round Needles (Solius).

Shopping is concentrated in the city center in the Rambla de Portalet.

There are no Michelin-listed restaurants in the city.

The main city free beach is the sandy Platga de Sant Feliu, which is about a kilometer long. On the outskirts of the city, you can find several small beaches in rocky coves.

The main access to the city is by road. The main road C-65 connects to the C-31 motorway and then to the AP-7 Mediterranean motorway, Catalonia’s main road. Likewise, the C-253 road makes it easier for the city to connect with neighboring cities such as S’Agaro, Playa de Aro or Palamos, just as the GI-682 connects Sant Feliu with Tossa de Mar. However, due to its speed, the C-31 is also the most frequent route for short trips.

Another communication system available to Sant Feliu is the port, although there is little activity there. Due to the shallow depth of the bay, the port has become more like a marina than a cargo or passenger port.

Finally, until 1969, Sant Feliu had a railway connection to Girona via a narrow gauge railway, built in 1892 and passing through the plain of the forests of Girona and Val d’Aro.