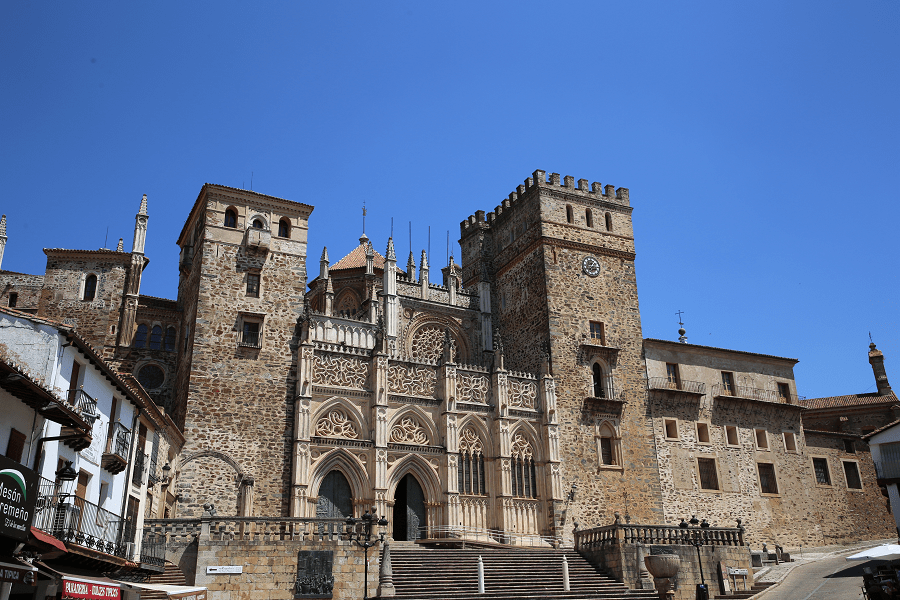 La Puebla de Guadalupe, or Guadalupe, is a municipality and town in the province of Cáceres, in the autonomous community of Extremadura (Spain). It is located in the community of Villuercas-Ibores-Jara and in the judicial district of Logrosán. The closest towns by road are Cañamero, Alía, Castilblanco, Logrosán and Navalvillar de Ibor. 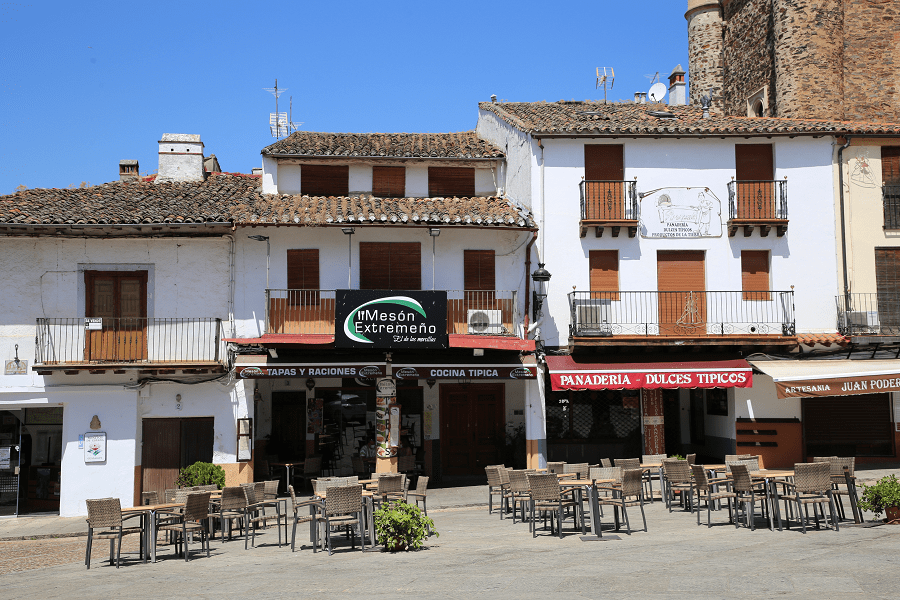 According to tradition, a shepherd found a carving of the Virgin Mary in the Guadalupe River in the late 13th or early 14th century. Near the place where the image was found, a hermitage was built around which the current settlement arose with the name of Puebla de Santa María de Guadalupe. 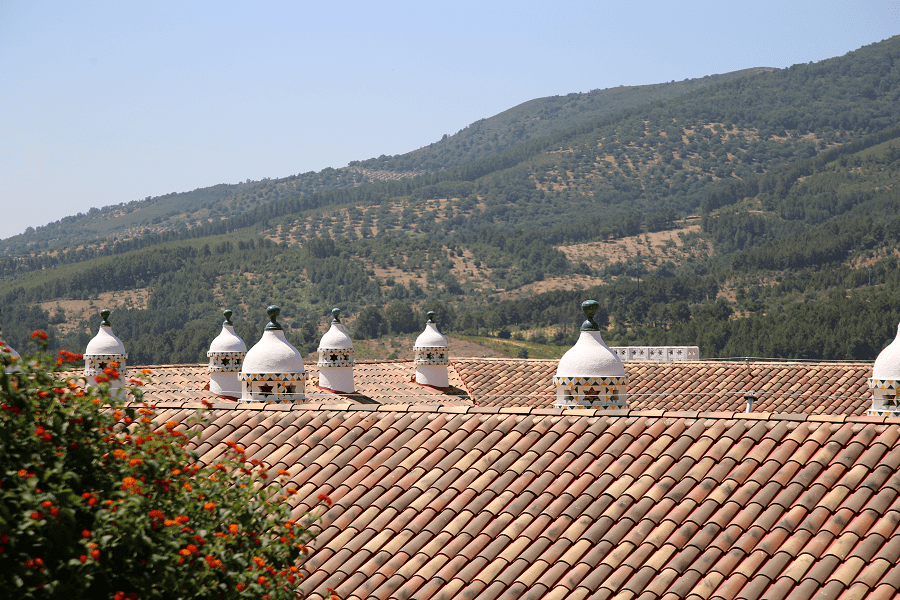 Since the construction of the first sanctuary, Guadalupe became the most important pilgrimage center in the Iberian Peninsula after Santiago de Compostela, a condition that it maintains today through the pilgrimage that comes from all over Spain along the roads of Guadalupe. 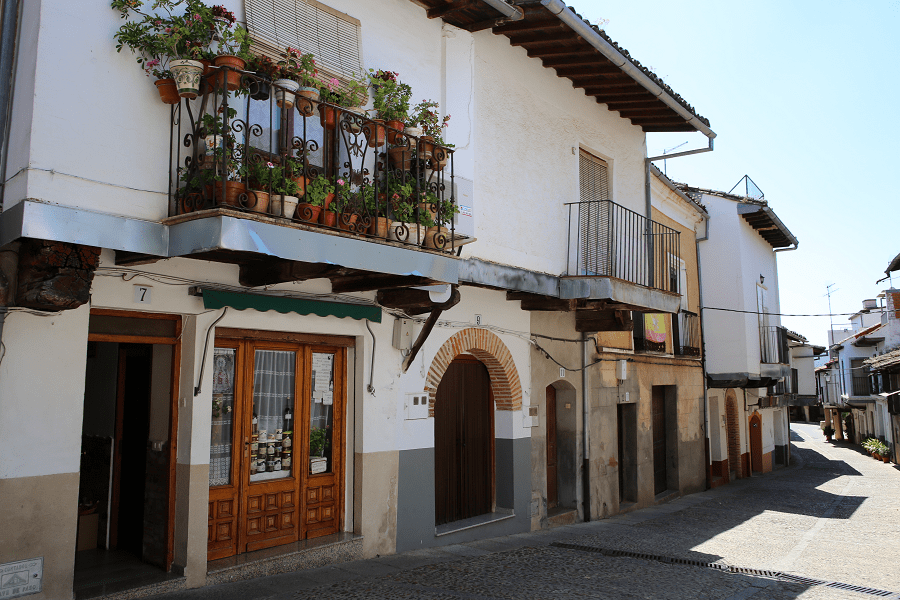 This is due to the fact that if Santiago is the patron of Spain, the Virgin of Guadalupe is the patroness of all Spanish-speaking lands and holds the title of Queen of Spain according to Catholic tradition.

The Royal Monastery of Santa María de Guadalupe is considered one of the greatest symbols of Extremadura and the Virgin of Guadalupe is also the patron saint of this region. 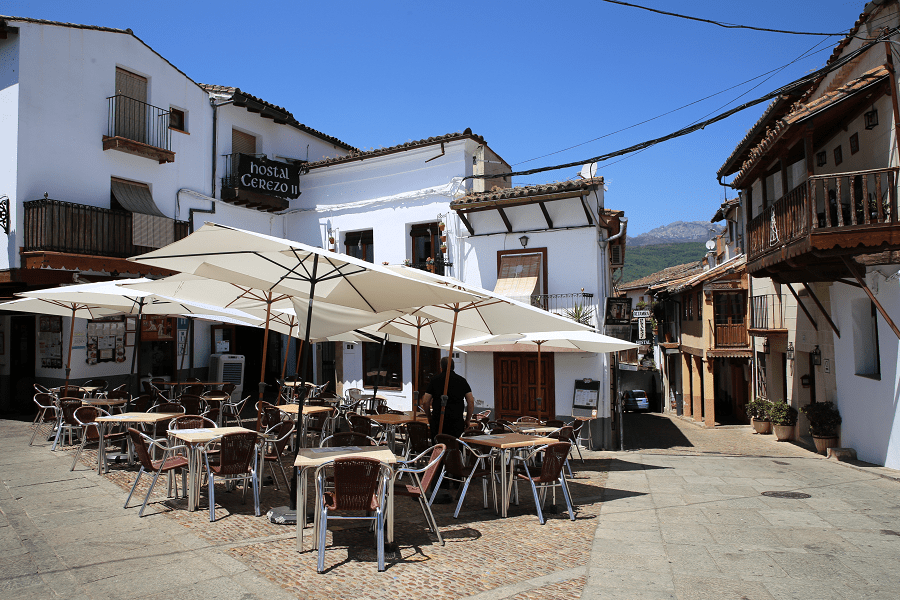 The municipality has a large number of monuments in addition to the monastery.

Since 2018 Guadalupe has been a part of the network “The most beautiful towns in Spain“.

The Royal Monastery of Santa María of Guadalupe is a Roman Catholic monastic establishment built during the 14th century. It is located at the foot of the eastern side of the Sierra de las Villuercas and was one of the most important and fine monasteries in Spain for more than four centuries. UNESCO declared it a World Heritage Site in 1993. 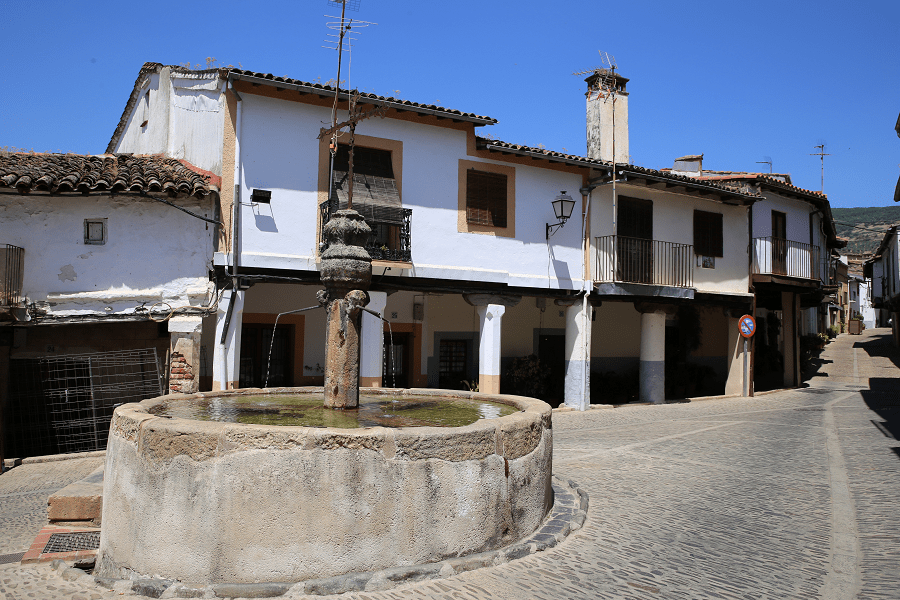 The monastery has rich associations with the New World, including the Guadeloupe island in the Caribbean. It was here in Extremadura where Christopher Columbus made his first pilgrimage after discovering America in 1492 and where he first thanked heaven for his discovery. 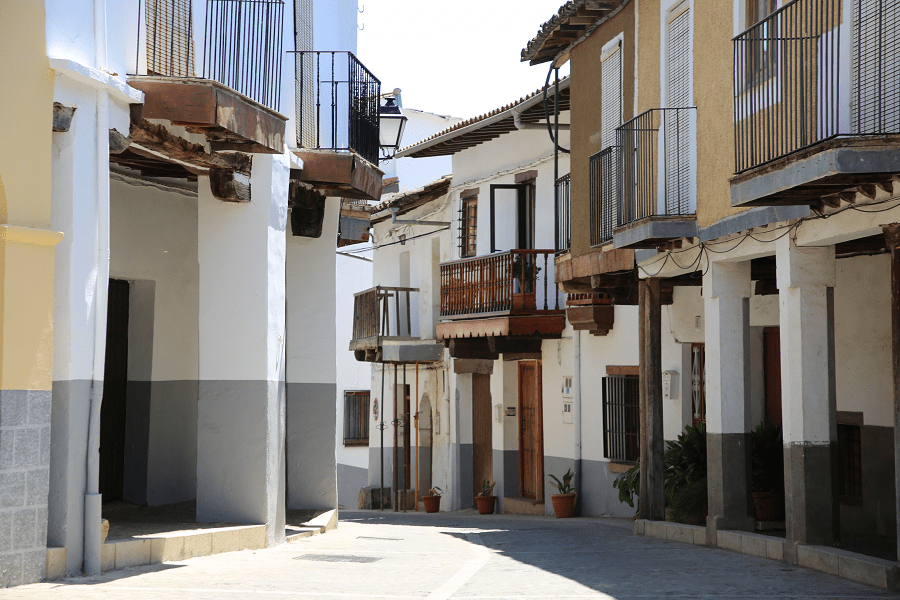 Even after the monks from Guadalupe founded the famous monastery of Escorial, which was much closer to the royal capital, Madrid, Santa Maria de Guadalupe retained the royal patronage. It remained the most important cloister in Spain until the Confiscation of monasteries in 1835. In the 20th century, the monastery was revived by the Franciscan Order and Pope Pius XII declared the shrine a “Minor Papal Basilica” in 1955. 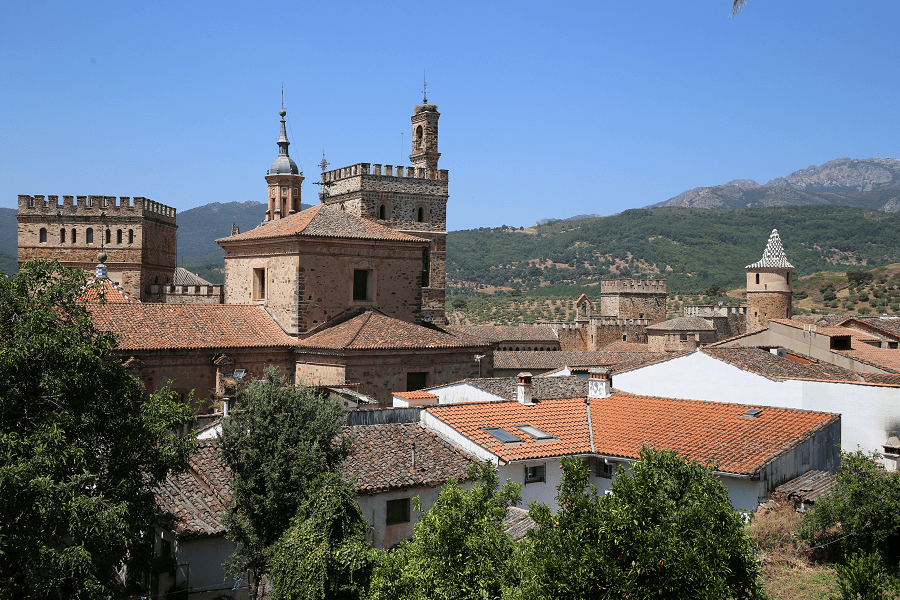 The monastery, whose architecture evolved throughout many centuries, is still dominated by the templo mayor, or the main church, built by Alfonso XI and his immediate successors in the 14th and 15th centuries. The square chapel of Santa Catalina is also of the 15th century; it is known for a cluster of ornate 17th-century tombs. The 16th-century reliquaries chapel connects Santa Catalina with the baroque sacristy (1638–1647), lavishly decorated and boasting a series of paintings by Zurbarán. 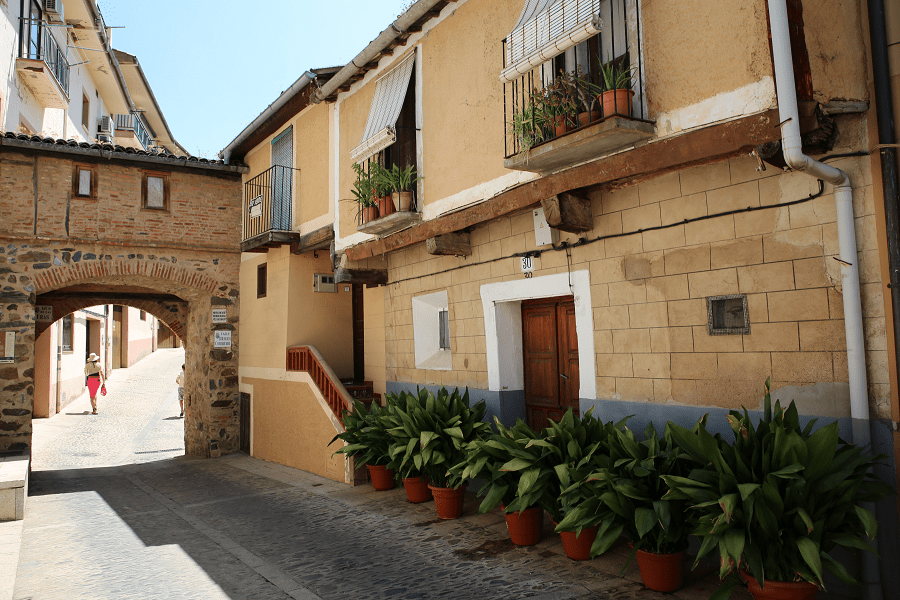 Behind the basilica is Camarin de la Virgen, an octagonal baroque structure (1687–1696) with the impressive stuccoed Chamber of the Virgin and nine paintings by Luca Giordano. The jewel of this profusely ornamented hall is a throne containing the statue of the Madonna which gave the monastery its name. 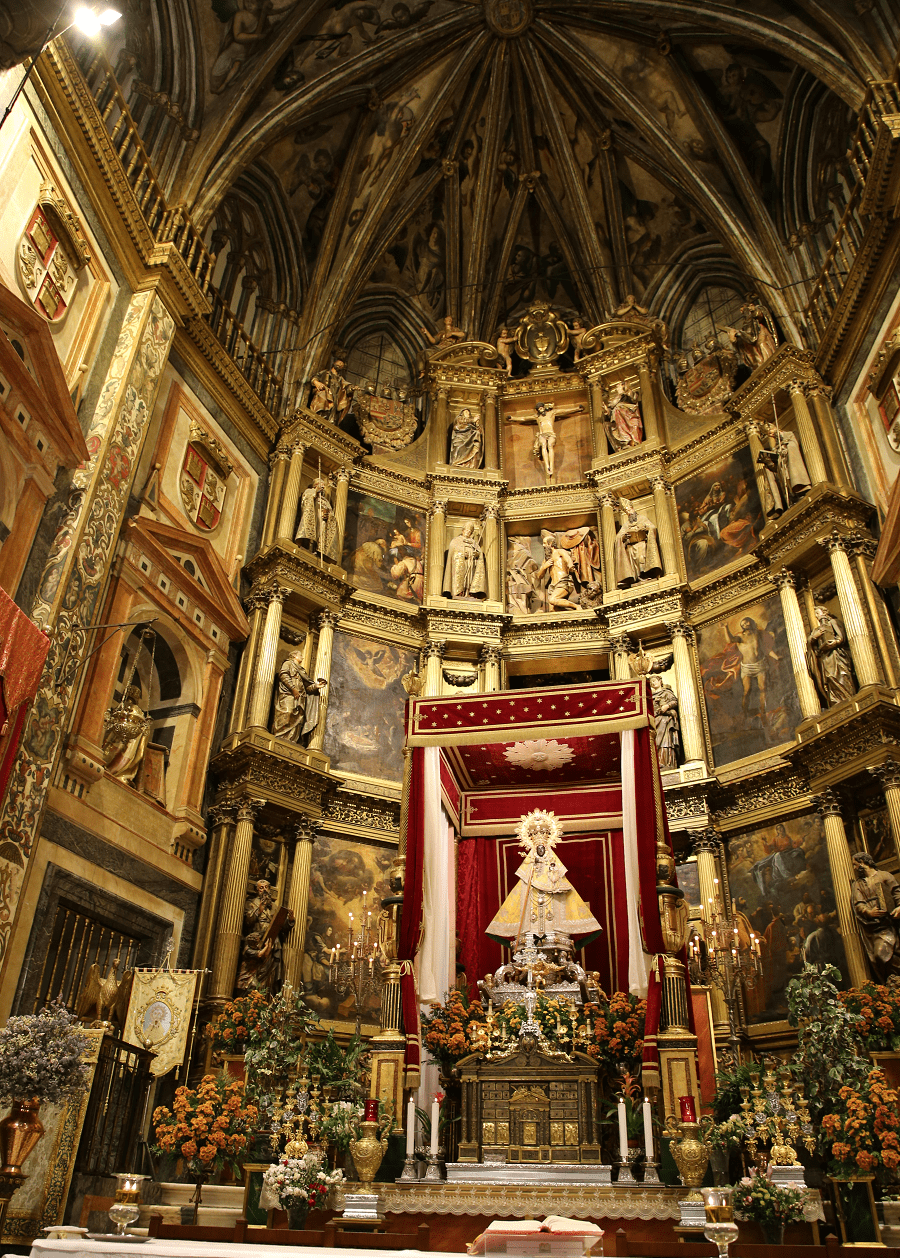 Other notable structures include the Mudéjar cloister (1389-1405), with the magnificent Plateresque portal; the late Gothic cloister from 1531–1533, and the new church, commissioned by one of Columbus’s descendants in 1730. Regrettably, the palace of Isabella I of Castile (1487–1491) was pulled down in 1856.

La Puebla (Old city) is an interesting Historical-Artistic Complex from the 14th-16th centuries, with beautiful streets and houses with arcades. Its monuments include: 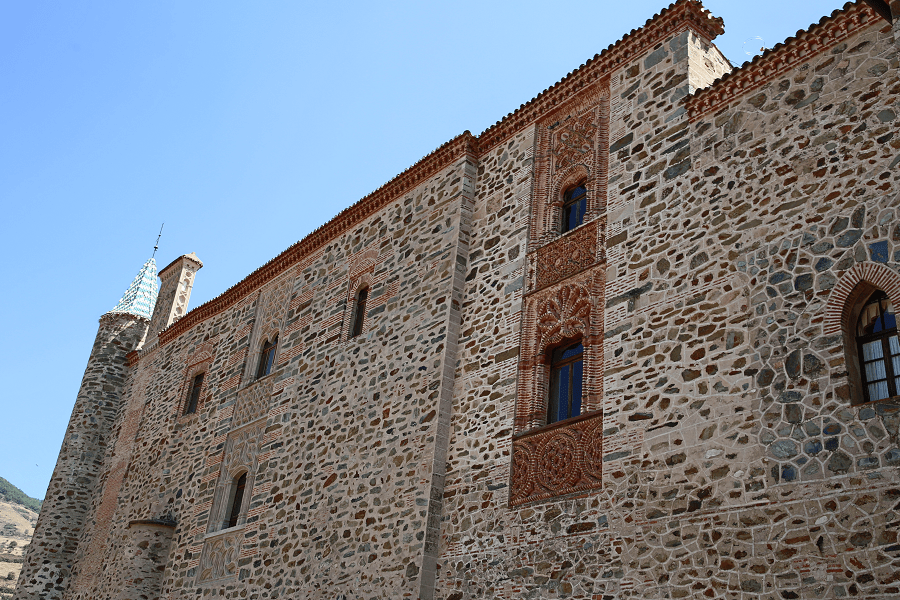 Infants College or College of Grammar, a former center for the teaching of humanities and religious singing, where the trivium was taught. Work of Antón Egas (16th century), it is a precious example of Mudejar art for the cloister, ceilings and doorways. It was converted into the Parador Nacional de Zurbarán in 1966. 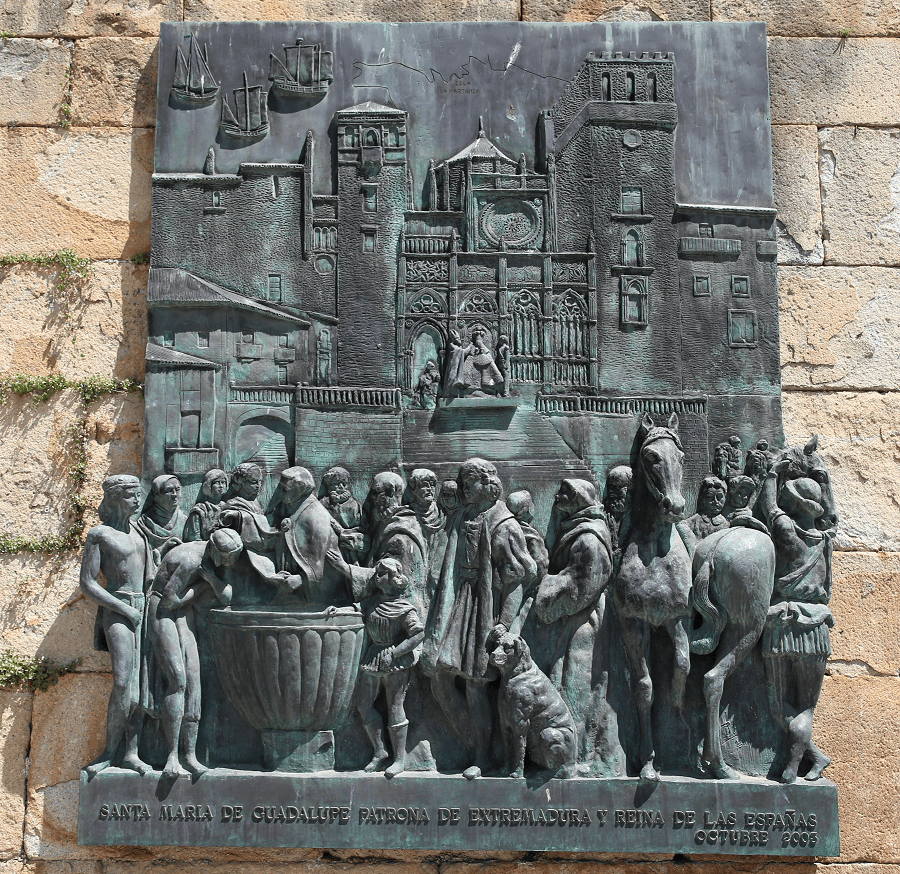 Hospital set, network of old shelters and hospitals (14th-16th centuries) for the care of pilgrims and the sick; The Monks’ Infirmary (part of the monastery’s Hospedería), and those of San Juan Bautista (or Men, now a dependency of the Parador de Turismo), Nuevo (or Women), La Pasión and San Sebastián are preserved. In the Hospital of San Juan, surgery and dissection by friar and secular surgeons were practiced for the first time in Spain, with pontifical authority granted by Pope Eugene IV in 1442.

Church of the Holy Trinity (Iglesia Nueva), a Baroque work by Manuel de Lara Churriguera. Building with a baroque façade is a temple with three naves with a transept and a dome dedicated to the Trinity. It was built in the years 1730-1735 at the expense of the Duke of Veragua, a descendant of Christopher Columbus. 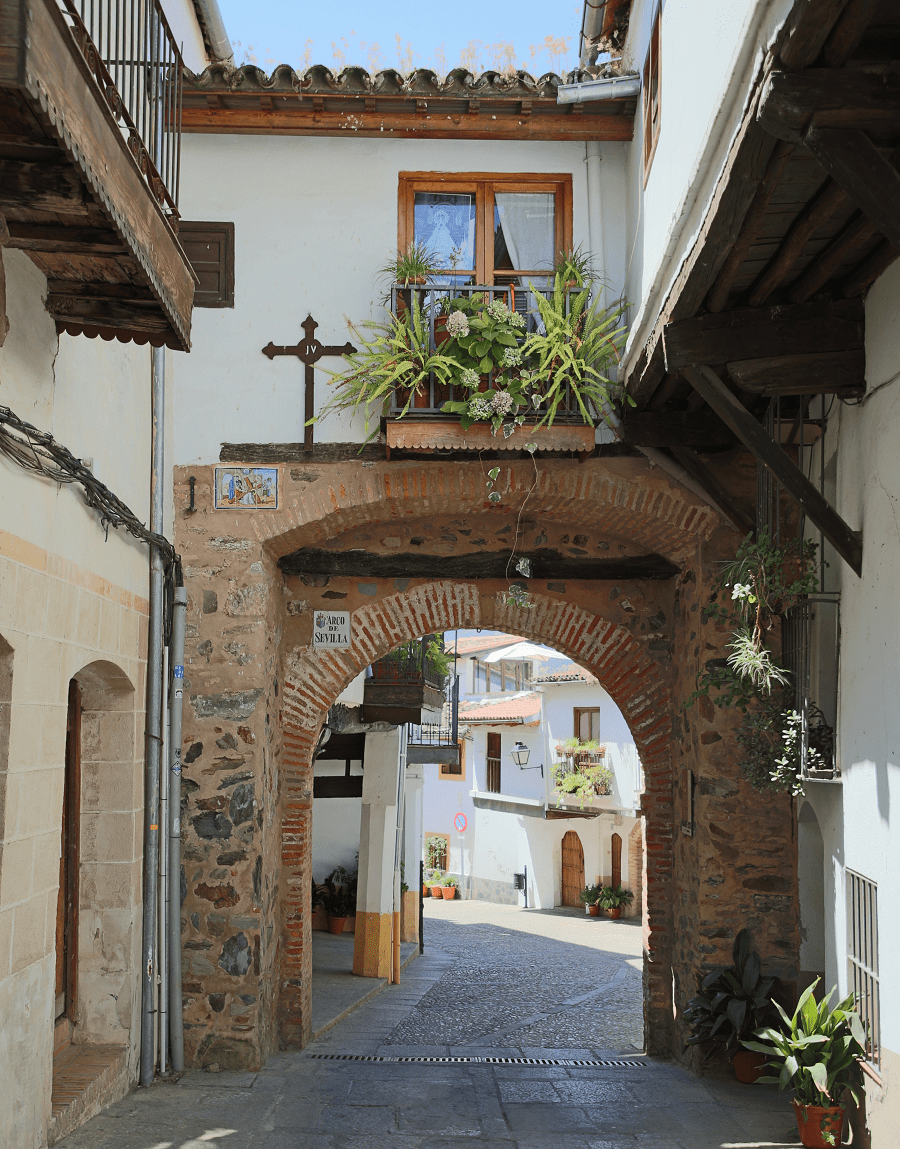 Medieval arches, of the old walls; Five are preserved (three – San Pedro, Seville and Chorro Gordo – from the inner wall, and two – Eras and Tinte – from the outer wall).

Old Jewish quarter. With houses from the 14th to 16th centuries. The houses that surround the Plazuela de los Tres Chorros and the streets to the west are grouped together, with typical wooden arcades and flowery balconies, evoking the ancient customs of the mountains. Norberto’s Artisan Bethlehem should also be mentioned, a set with more than 400 pieces of fired clay, conceived by the Barba González family, and open to visit all year round. 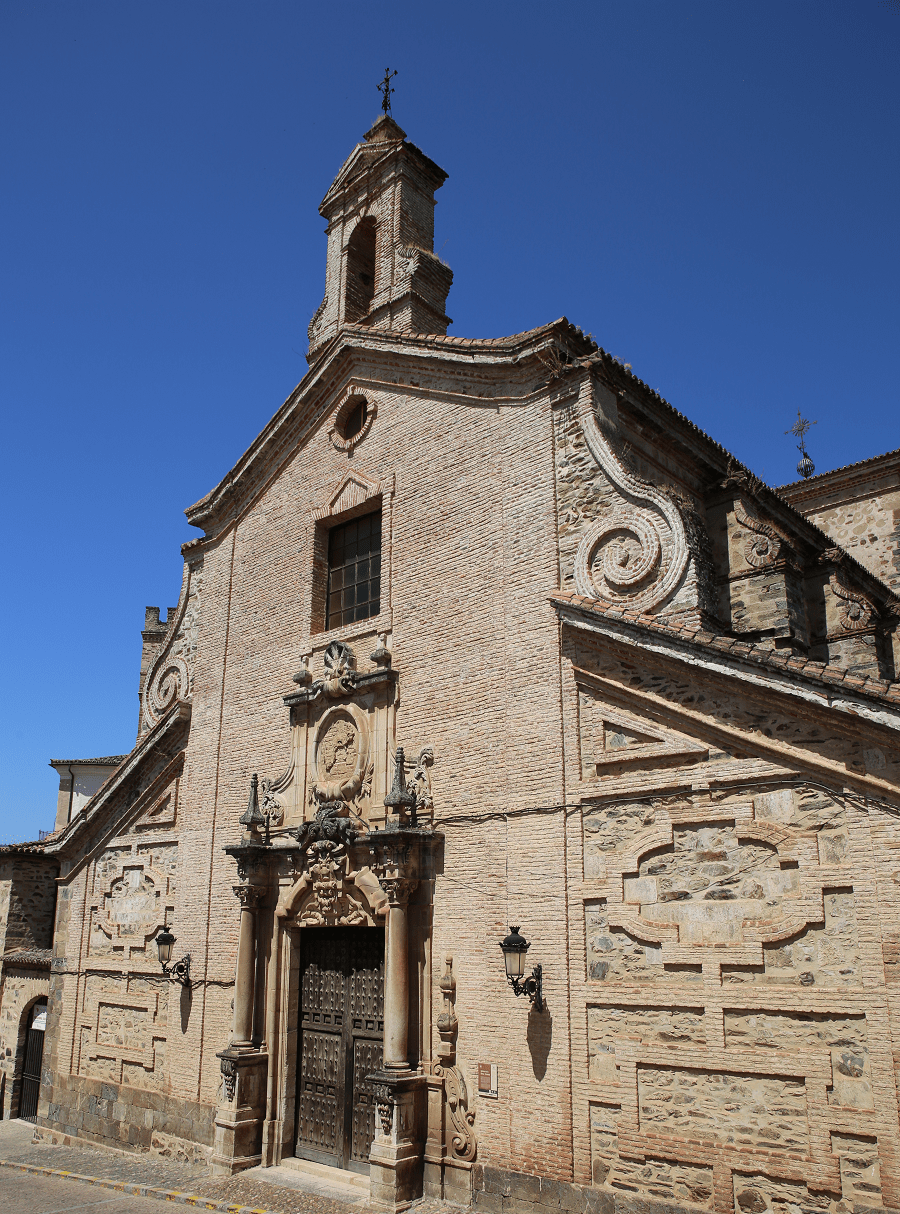 In the surroundings of Guadalupe there are also some important monuments: 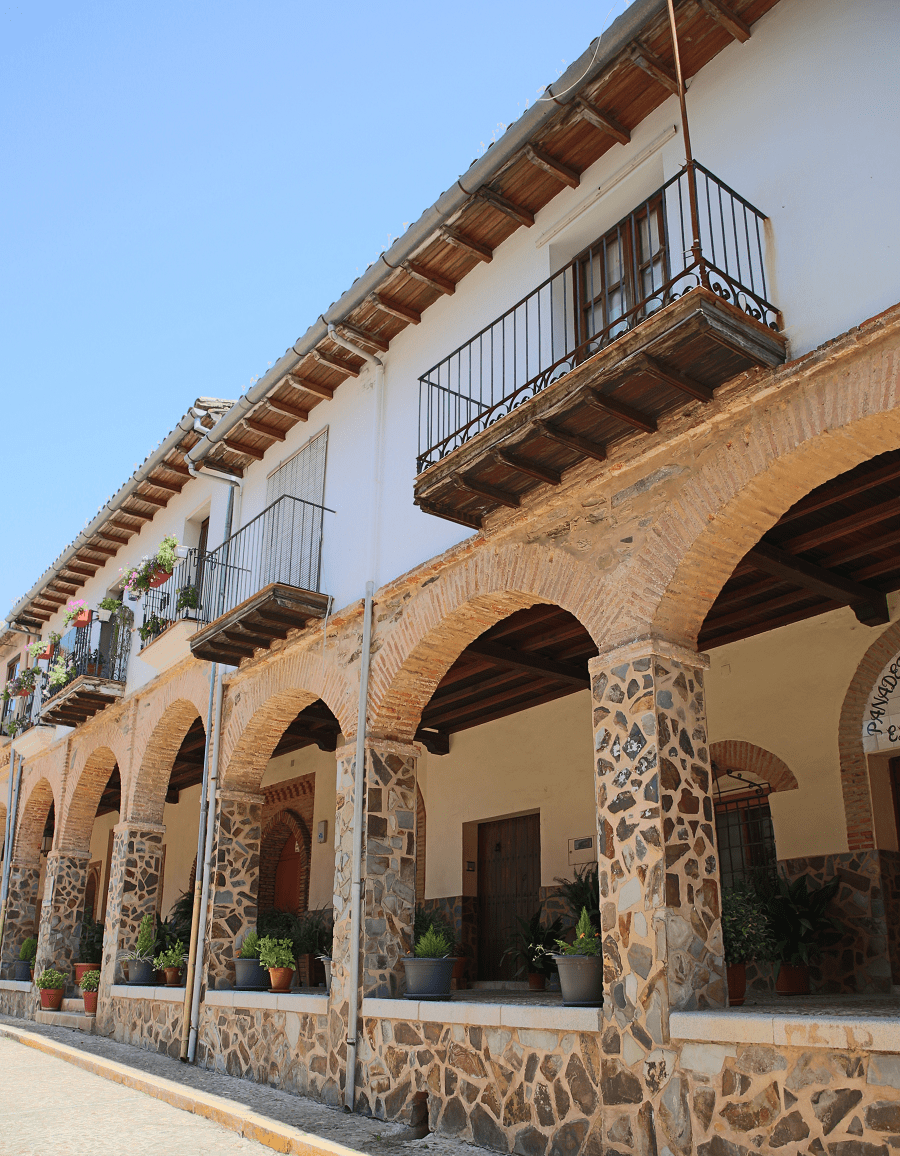 Guadalupe is an important pilgrimage center from various parts of Spain. After the start of the construction of the Monastery of Santa María de Guadalupe in 1337 by order of Alfonso XI, a network of roads was created that linked the main population centers of the center of the peninsula (Plasencia, Cáceres, Mérida, Ciudad Real, Toledo, Madrid) with Guadalupe. 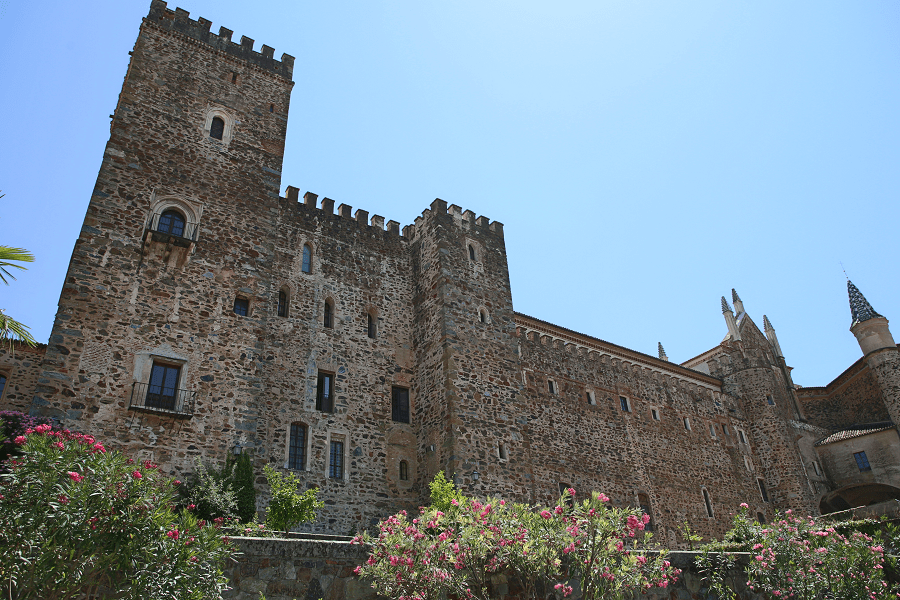 At present, the layout of twelve of these historic roads is known and preserved, which act as the final stretch of longer roads that connect all ends of the peninsula with the town of Guadalupe. The twelve historic roads are: 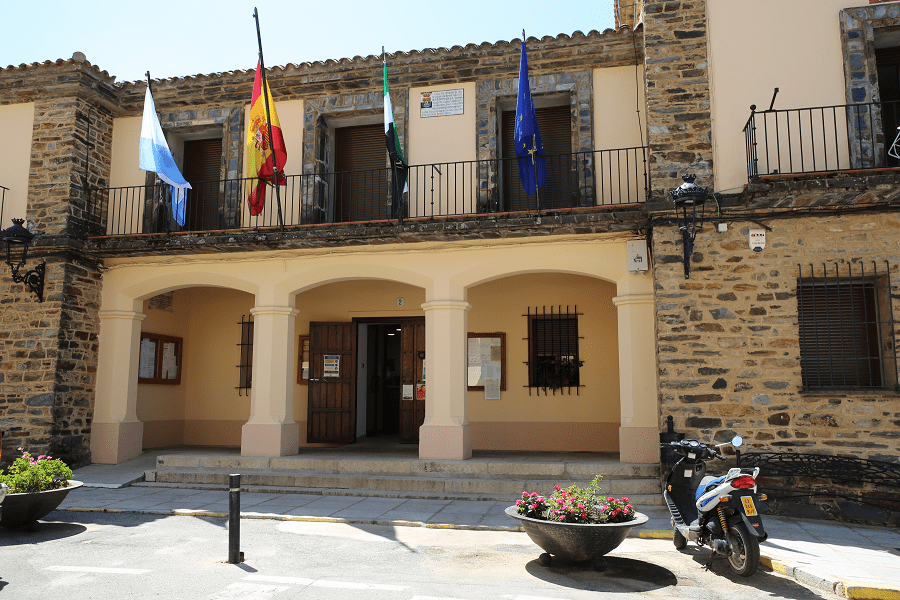 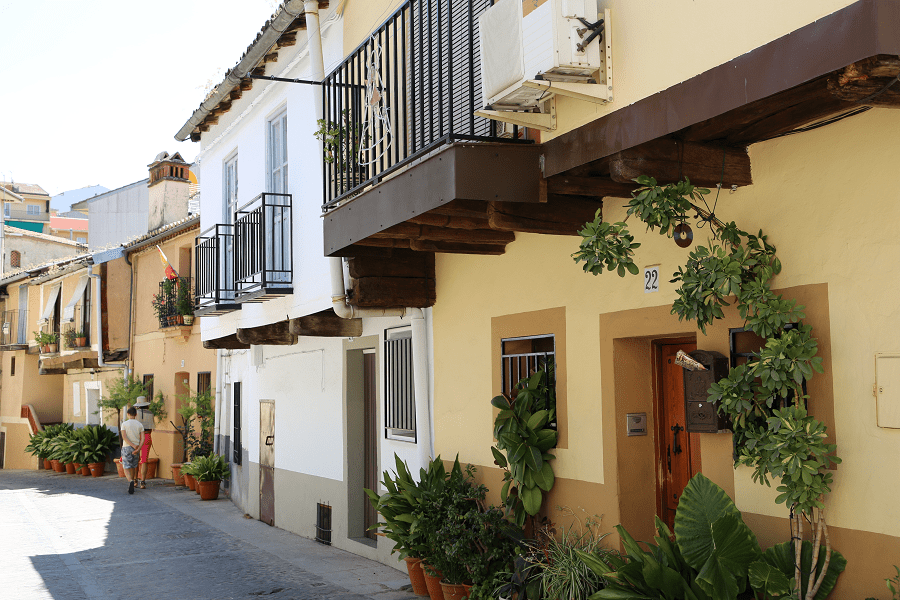 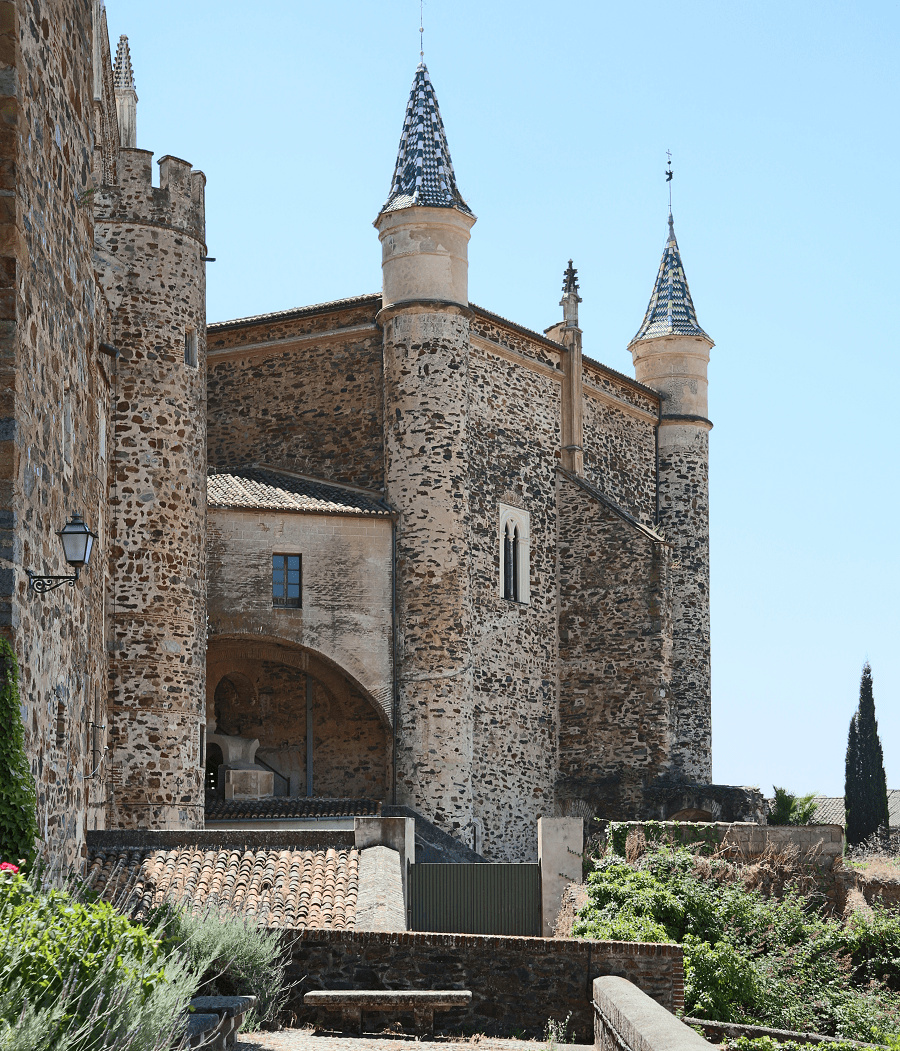