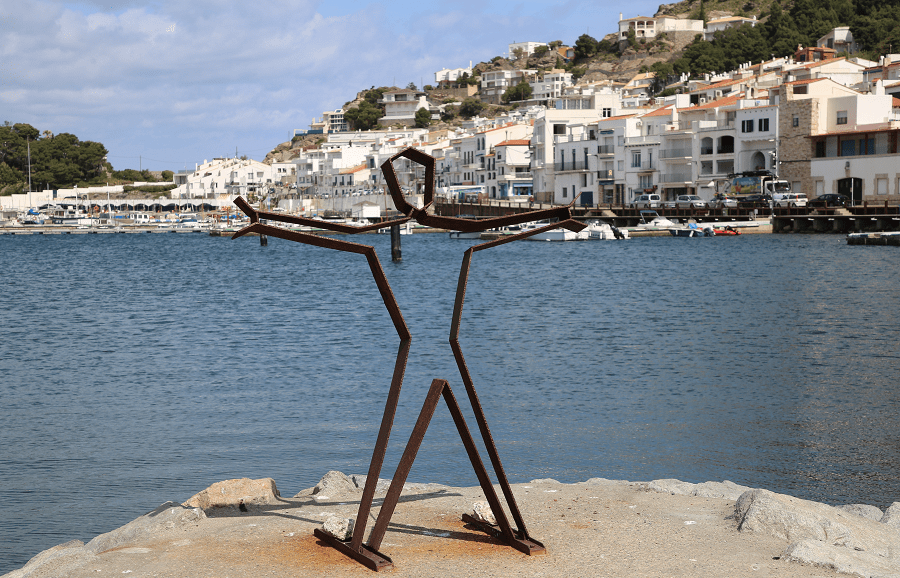 It’s a popular part of the  Costa Brava of the Mediterranean resorts of Spain.

El Port de la Selva is both enjoying the Mediterranean Sea, and the greenery of vineyards, and the low mountains of the Serra de Rodes towering over the sea with such peaks as San Salvador Saverdera (670 m) and Puig de Queralbs (621 m).

The Serra de Rodes (cat. La serra de Rodes), the westernmost pillar of the Pyrenees, at the foot of which the city is located, was formed by the folds of the primary era. It consists of both metamorphic and plutonic rocks. The morphology has led to the formation of steep banks as a result of the erosional effects of the sea and wind, with numerous river valleys, flooded by the sea, which form the articulated coast and its picturesque bays, with high peaks and steep headlands. It is one of the wildest and most picturesque places on the northern Costa Brava.

The first historical mentions of the place occupied by El Port de la Selva date back to 974. However, until the beginning of the eighteenth century, there is no mention of the existence of residential buildings here. The construction of the first church began only in 1725. From the very beginning, these were the homes of fishermen who lived in Selva de Mar and other surrounding villages.

From the 1960s to the present, tourism has been the most important economic activity in El Port de la Selva. The origins of tourist interest in the city date back to the 1920s, when a group of intellectuals discovered it. The beauty of the bay turned the first tourists into hot promoters of El Port de la Selva. Among these, Josep Maria de Sagarra (cat. Josep Maria de Sagarra i de Castellarnau) stands out, who found inspiration in some of his works with a marine atmosphere, such as “La Balada de Luard”, “El mariner” or “Cançons de rem”. Josep Maria de Sagarra was a Catalan poet, writer, playwright, journalist and translator. He was the author of highly popular plays and a prominent member of the Institut d’Estudis Catalans and the Royal Academy of Fine Arts, which has won numerous literary awards.

With the growth of tourism, the number of residential areas has increased, giving a new look to the city and its surroundings. However, today El Port de la Selva still retains the appearance of a fishing village.

The cultural heritage corresponds to all historical periods, from prehistoric times to the present day; but the monuments of the Middle Ages stand out both in quality and quantity.

In the Santa Creu Valley, there is the Church of San Frutos (cat. Sant Fruitós) and the streets leading to the fountain or the path leading to the Monastery of Sant Pere de Rodes, which dominates the area from the top of the mountain.

The monumental complex of Sant Pere de Rodes was declared a cultural property of national interest by the Department of Culture of the Generalitat of Catalonia in 1997. This complex is formed by the Monastery of Sant Pere de Rodes, the Castle of Verdera (or San Salvador de Verdera) and the old village of Santa Creu de Rodes, in the center of which is the Church of Santa Helena de Rodes.

In addition to this exceptional complex, there are other monuments of medieval origin in the municipality, such as the Church of San Baldiri de Tavellera, located in the Cap de Creus massif, along the GR11 road.

The remains of “folk architecture” are also scattered throughout the area, which stand among the dense vegetation that covers the old cultivated land. Other sites worth visiting are the Canavall mill – an old grain mill – and the Corral de l’Almeda.

This small corner of Cap de Creus is home to some of the best and cleanest beaches on the Catalan coast. There are 31 beaches in total. Sandy beaches give way to pebble beaches, but they all have the crystal clear waters characteristic of the Cap de Creus coastline and are ideal for families with children and for water sports.

For many years, the Generalitat of Catalonia has included four beaches in the region in a separate category in the observation and information program on the state of the beaches.