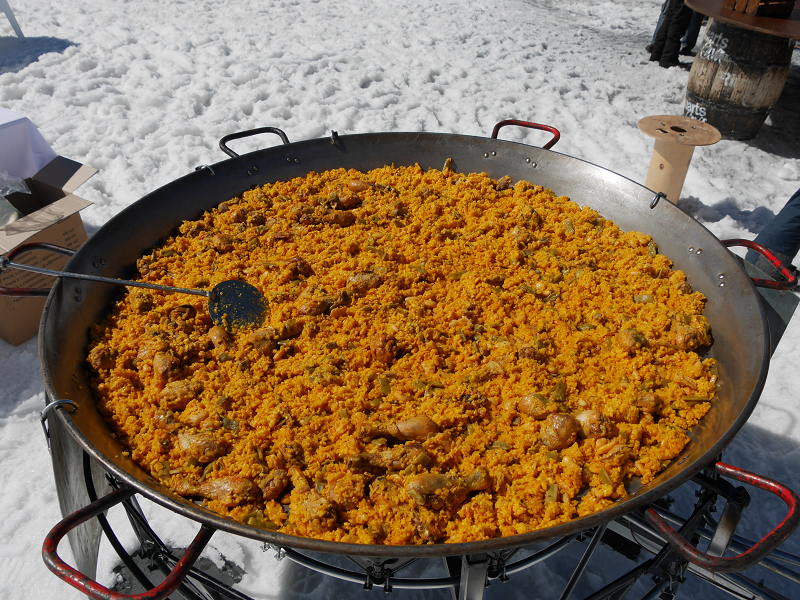 Andorran cuisine is a mix of cookery traditions of the neighboring countries – Spain and France, also Catalonia, however according to the expert’s opinion, traditional dishes are cooked in Andorra more simply and the domestic way of its preparation is brightly represented in it. Restaurants in Andorra are located as in cities so along the highways, and their quantity is more than 400. The schedule of the most restaurants in Andorra is: 12:00 – 16:00, 18:00 – 24:00.

Andorran cuisine is an example of preservation of the traditional, adapted to high mountains cuisine, which uses high-quality products, granted by this land.

The best restaurants of Andorra are keeping to the principles of the local Pyrenean cuisine as the highest value. At the same time, an offer of more than 400 restaurants, located throughout the country is very broad and includes dishes from all the world, which reflects a cosmopolitan character of Andorran restaurants, which can satisfy every taste. Particularly one ought to mark the restaurants for gourmets: many of them are located not far from expensive hotels. They offer a constantly renewed menu of delicious dishes for every taste made from freshest local products.

Speaking about traditional cuisine of Catalonia and Andorra one ought to mention about wine. Here are few examples: Cim de Cel – a growth of vineyards on the altitude more than 1 thousands meters above sea is contributing to their unique and specific taste; Escol – wine made, according to personal recipe of one of the most famous wine-cellars of Andorra Borda Sabate; Casa Auvinya – “a product of evolution” the so-called black wine, made from Pinot Noir sorts and Syrah varieties(a wine sort, used for preparation of red and rose wines). Casa Auvinya – is also a white wine, made of Pinot Gris, Albarino and Viognier sorts; and finally, Caller Maas Berenguer – a white wine, made of varieties of Chrdonnay sorts. Thies wine is also produced form sorts Pinot Noir and Sauvignon Blanc. Look for details here

Potato (trumfa) is also considered as a special product – one offers no less than four sorts: naga, noisette, anais and florica. This is a unique, useful and tasty product. It is included in state official’s menu – representatives of a higher society, and also dishes from the best restaurants of Andorra.

Gastronomical traditions of Andorra are observed in the so-called les bordes, which are situated on the frontier territories of Andorra and France. Formerly these houses were used as a store for corn and domestic animals, delivered by France. Today some of them turned into fashionable and comfortable tiny restaurants, which offer not only to taste delicious traditional dishes, but are also surprising by their original decorations.

In autumn a hunting season is starting in Andorra. At this time most of traditional Andorran restaurants offer dishes from game. The hare meat and wild boar is the most special. In mountain woods of Andorra many mushrooms are growing, which are prepared according to local recipes and serve a perfect garnish to the meat dishes – stewed or grilled. A classic example is white mushrooms in cream-saffron sauce with a sponge mushroom and chili pepper. They are served with wild rice, mashed potatoes and special sauces. Meat dishes, made on a grill or stewed on open fire, are served with a quince and garlic sauce aioli. Such dishes are broadly spread in alpine cuisine. Autumn is a time for numerous gastronomical festivals, among them is a “Festival of the noble mushrooms” (Fira de bolet). In this time traditional Andorran cuisine become its real proud. For example, on the Eve of a Helloween special confectionary goods panellets are being cooked, the basic component of which is a dough, made from sweet potato, almond and cedar nuts. They are served with dried out fruits, nuts and chestnuts and drunk after with white sweet muscat.

In winter when it’s getting cold Andorra generously offers hot dishes with season vegetables: cabbage or beet. One of the most widespread dishes of this season is escudella: it is being served on national holydays Santa Llucia, Sant Antoni and Sant Sebastia. It is a boiled pork with vegetables (is is being eaten with spoon).

At Christmas escudella is being served with shell macaroni and is called different – sopa grossa ( a potage). On the dessert a coca massegada( made of eggs, milk, flour, sugar, anis and cognac). One more dessert is being served to this – turron. (a sweet from almond). And finally one more traditional winter dish – trinxat. It is being prepared from cabbage, potato, garlic and bacon. In winter people in Andorra like to cook and treat guests with self-prepared hamon. Here are the names of the most recommended varieties: bringuera, bull de donja, bisbe, llonganissa and botifarra. In February people also celebrate Carnestoltes ( “a feast of sardines”).

In spring after the end of Lent, the most widespread desserts in Andorra are – bunyol de vent and mona de Pasqua. These are kinds of Easter cakes, which are eaten with boiled eggs. Traditional for this season also are salt herring and sea-eel – this kind of wish lives in the mountain lakes of Andorra. In late spring a fishing season begins, and people are allowed to catch a trout. It is being burnt on a frying-pan and is served with almond and ham. Cheese amateurs will find many of its kinds, including sorts, made in Andorra. The most famous is tupi cheese: it is being made of sheep or goat milk.

In summer the most favorite and popular dish in Andorra is salad from chicory (its leaves are growing in Pyrenean) with bacon. Snails or quince can be added in the salad by your wish. A salad is recommended to be filled with mayonnaise. Summer in Andorra is a time of feast and festivals, and the head cooks of Andorra restaurants are preparing and serving dishes in order to surprise the most refined guests-amateurs of gourmet food. Customers are offered with Andorran-style cannelloni – puffs from dough with meat filling (“a mix” from the flesh of lamb, pork and hen) with béchamel sauce. It is a classic dish of catalonian cuisine. A fresh meat of a rabbit and duck ( breeding in local farms) is being grilled. A traditional dessert is a shortcake with cedar nuts and cream.

A meat quality control in Andorra is worth mentioning. Breeding of cattle and foul in Principality is a centuries-old tradition, and the secrets of animal-breeding are passed over from one generation to another. An Association of domestic animals owners is created in Andorra, which look after products which are coming in to stands of supermarkets and private shops. One more typical kind of product is sausage. The farmers of Andorra recently made considerable efforts to increase a quality of such products as veal. Special attention is paid to growing of potato.

In conclusion one more example from a classic Andorra cuisine: Nectum, a natural syrup from cones of a conifer. By its texture it reminds a honey. It is an ideal filling for every kind of salad, white meat mato cheese.

There are many plants, growing in Andorra, which broadly used as a relish to different dishes and also medical herbs. Among the most famous are: mint, lemon mint, hyssop, wild thyme and origanum.

Andorra can surprise the amateurs of beer. They will discover here a local sort Alpha. This beer is brewed in Andorra according to traditional technologies and it has four kinds: Pilsner, Toasted, Monjo boig and Crepuscle.