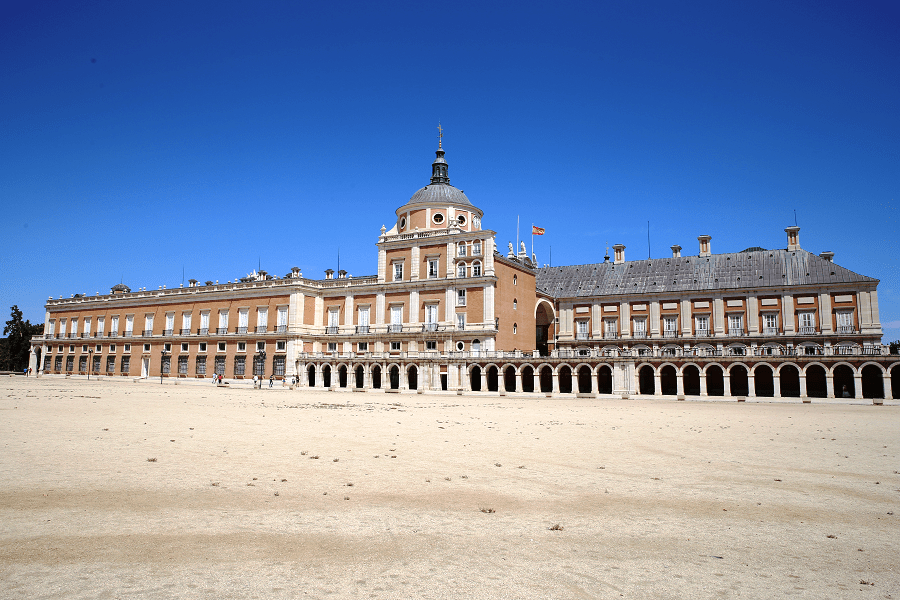 Aranjuez is a municipality and city in Spain in the extreme south of the Community of Madrid, head of the judicial district of the same name. It is located in a wide valley, next to the confluence of the Tagus and Jarama rivers, bordered by a set of hills and plateaus that reach 630 meters of altitude. In addition to natural channels, it has an extensive network of artificial canals, ditches and historic dams that, traditionally, have favored irrigated crops, such as fruit trees and vegetables, among which stand out strawberries and asparagus.

Aranjuez became one of the Royal Estates of the Crown of Spain in 1560, during the reign of Philip II. Until 1752, only the royalty and nobility were allowed to dwell in the town. 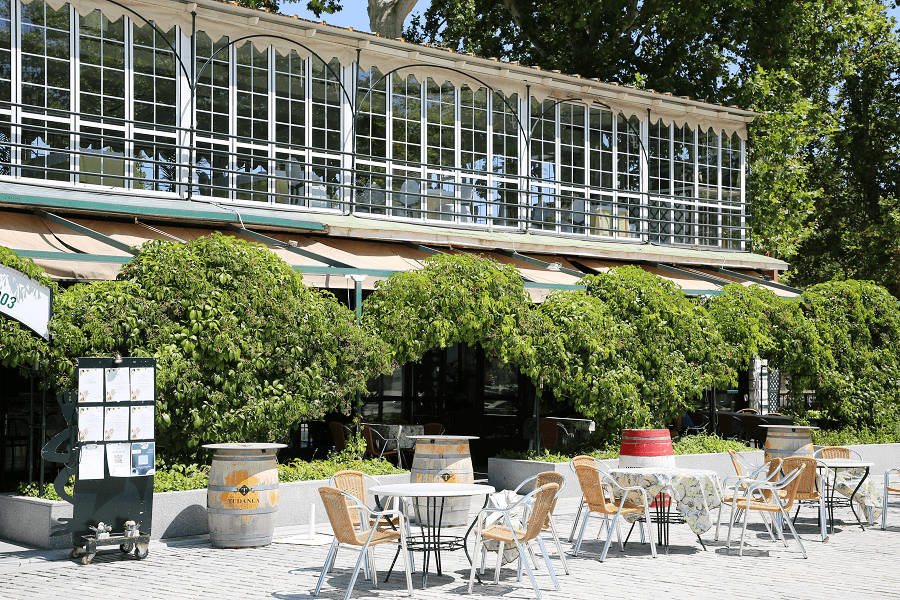 The tourism is based mainly on its numerous historical-artistic heritage, in which the palace and the ornamental gardens (gardens of the Prince, of the Island, of the Parterre, of Isabel II), the historical orchards, the tree-lined walks and groves ( Pico Tajo, Doce Calles, Legamarejo, El Rebollo), the hydraulic works, the agricultural areas and the historic center, which includes elements such as the House of Knights and Crafts, the House of Infantes, the church of San Antonio and the convent of San Paschal. In 2001, this entire complex, under the name of Cultural Landscape of Aranjuez, was declared by UNESCO as a World Heritage Site.

Throughout the year, the most representative events are the Royal Spring Days -in memory of the old celebrations of the Court in Aranjuez, the festival of San Isidro Labrador in the Real Cortijo de San Isidro, the festivities patrons of San Fernando and the festivities of the Mutiny of Aranjuez. In the latter, which recall the events that occurred in 1808, the acts with the Godoy palace, the representation of the Mutiny and the Pirate Descent of the Tagus stand out; in 1990 they were declared a Festival of National Tourist Interest and in 2014 a Festival of International Tourist Interest. 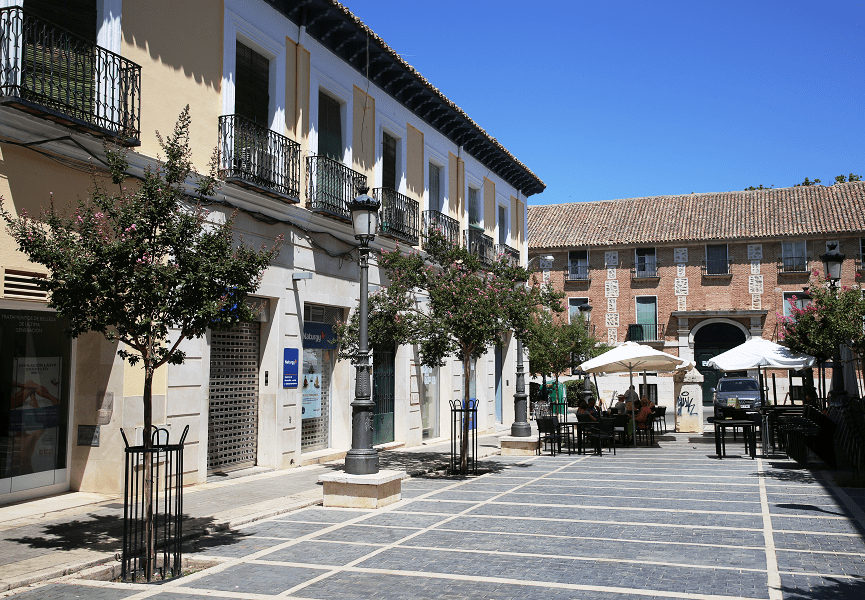 The city has been the scene and protagonist of numerous artistic works in the fields of cinema, literature, painting and music, although it is thanks to the latter that it acquired worldwide fame, by serving as an inspiration to the composer Joaquín Rodrigo for his Concert of Aranjuez.

The Royal Palace of Aranjuez was established around the time Philip II of Spain moved the capital from Toledo to Madrid. Aranjuez became one of four seasonal seats of government, occupied during the springtime (from about holy week). Thereafter, the court moved successively to Rascafría, El Escorial and wintered in Madrid.

It is open to the public as one of several Spanish royal sites in the Community of Madrid, Spain. Management is entrusted to the Spanish Patrimonio Nacional, which does not allow private photography of its interior for security reasons. However, licenses may be available for specific purposes upon application. 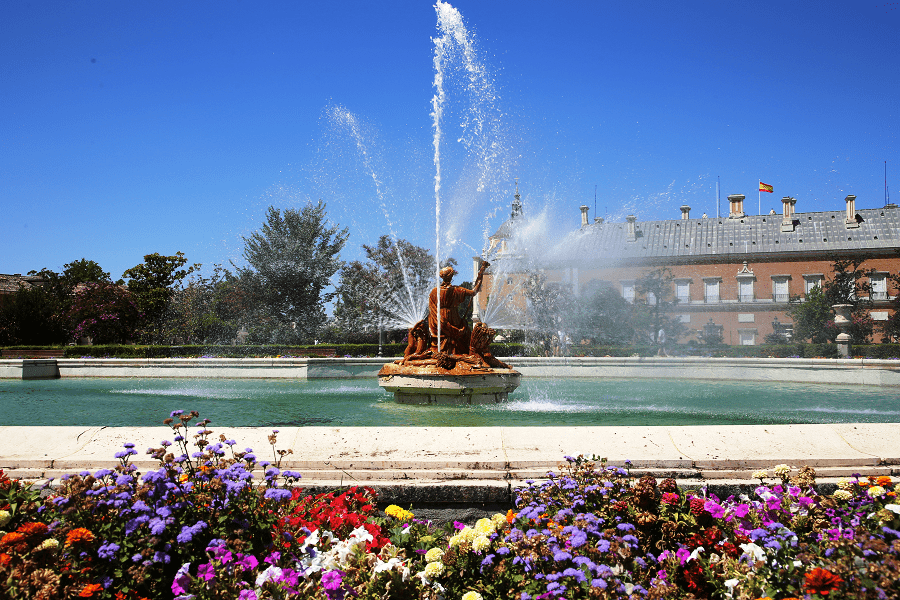 The palace is the centerpiece set of a royal estate. To the north are former potager gardens, now agricultural land intersected by geometric tree-lined “royal rides” which are now open to the public and mostly pedestrian walkways. To the east are a trident of paved roads (Reina, Principe & Infantas) along which the nobility erected family residences. To the west are a matching trident of rural tracks, one of which was the royal access road lined by barracks (now ruined).

Furthest from the palace is an open area, the Raso de Estrella, the site of the original hunting lodge and now a festival ground. The original railway station was also here, before it was relocated further west of the current site. Some of the former railway sidings – now a car park for commuters – are also still discernible. Directly in front of the palace is the oval lawn surrounded by monumental stone benches. The tourist mini-train stop is near there. To the south is the Plaza de Parejas, an open sandy area surrounded by various palace dependencies described below. 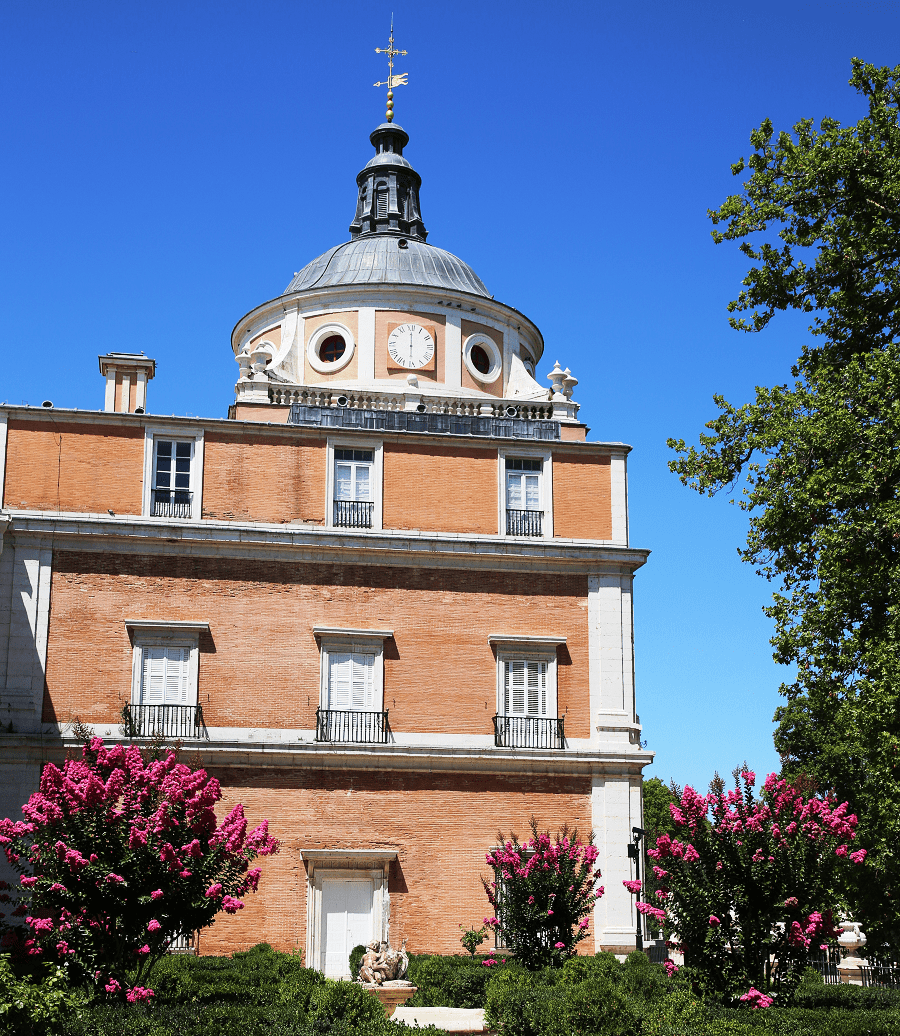 As part of the Royal Site, a series of gardens were laid out between the 16th and 19th centuries, encompassing different artistic and gardening styles.

The King’s Garden, projected in 1561 by Juan Bautista de Toledo and carried out by Juan de Herrera between 1577 and 1582, stands out for its sculptural ensemble, whose iconography is related to the Roman emperors.

The Garden of the Island, in whose development Juan Bautista de Toledo and Juan de Herrera also participated, was traced in 1561 and, along a main axis, presents a set of fountains with their corresponding sculptural groups. 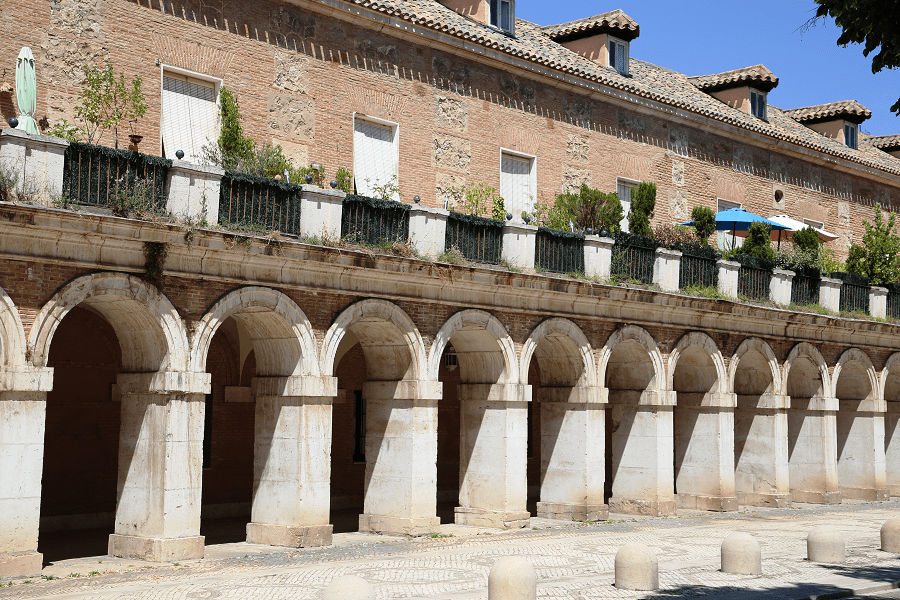 The Parterre garden was built between 1728 and 1735, according to a project by Esteban Marchand, and follows the French garden model. It is made up of three large groups organized around four fountains.

The Prince’s garden, the most extensive of all of them, it unified several previous actions with new spaces drawn under the concept of landscape garden. Pablo Boutelou worked on it, between 1775 and 1784.

Several sites stand out, the islands, the Chinese pond and the Casa del Labrador, a leisure mansion drawn up in a neoclassical style. 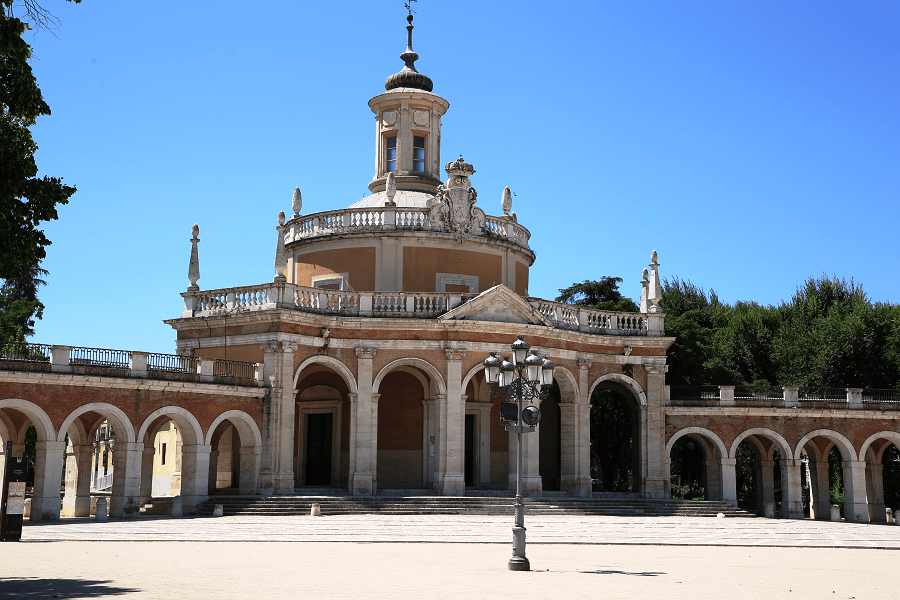 Finally, the Isabell II garden was built at the beginning of the 19th century and constituted the first landscaped space for public use in Aranjuez.

Since the 16th century, in order to have water to irrigate orchards and gardens, a set of infrastructures such as dams, canals and ditches were built. Thus, starting from the Embocador dam, built between 1530 and 1534, there are two canals, the Aves or Sotomayor, on the left bank of the Tagus, and the Azuda or Embocador, on the right bank; Both were initiated by Carlos I and promoted by Felipe II.

In the valley of the Azuda is the Azuda de la Montaña, a waterwheel that served to raise and transport the water to the grounds of the Casa de la Montaña. Al South of the urban nucleus is the Ontígola dam, built between 1563 and 1572 to supply water and to serve as a stage for shows and aquatic festivals. 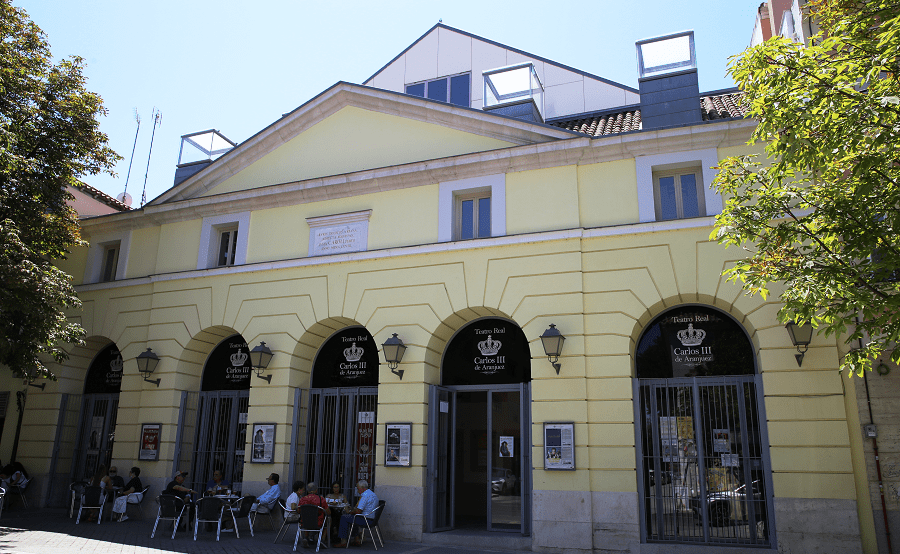 Another dam was built next to the palace to allow the navigability of the Tagus, filter the entrance of water to the estuary.

For the supply of drinking water to the city, in the mid-18th century, a project was carried out, the work of Santiago Bonavía, to transport water from various springs located north of Ocaña. From them the water was channeled to the urban area through pipes and aqueducts, with its s corresponding coffers for review and cleaning.

After the founding of the city, the construction of houses began to accommodate the retinue that accompanied the kings. Three types are distinguished: those promoted by the Crown for its officials, courtiers and employees, those carried out by merchants and professionals, and those carried out by the nobility, for the accommodation of their family and servants. 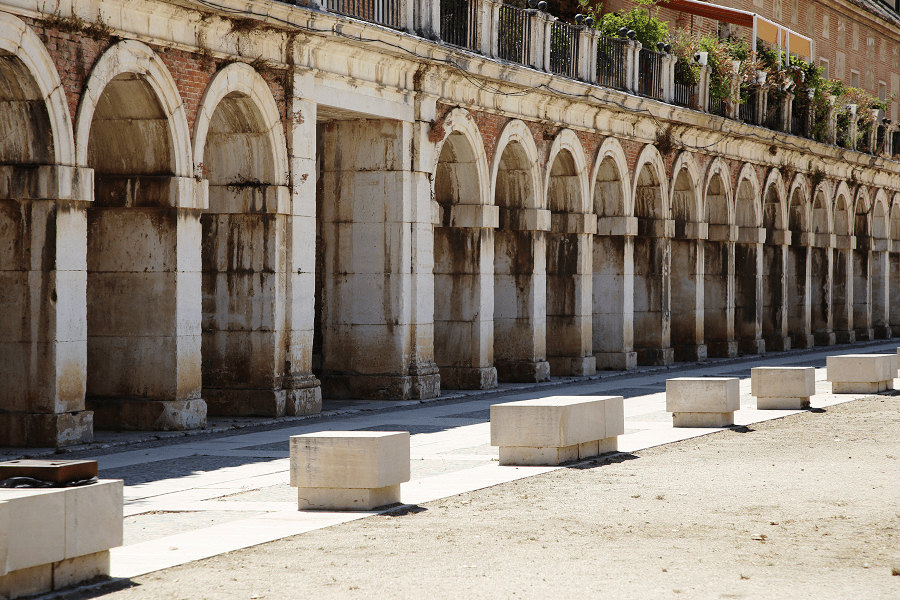 Among the latter are the Godoy palace, with neoclassical traces and owned, among others, by Manuel Godoy; the Palace of the Dukes of Osuna, initially built for Farinelli and occupied since 1787 by the Dukes of Osuna; The Medinaceli palace, destined for the family of the Dukes of Medinaceli and consisting of the main building and two auxiliary pavilions; the old Queen Mother’s garages, a building destined for the garages and stables of Bárbara de Braganza, but which, after her death, he would end up in the service of Isabel de Farnesio; the House of Godoy, ordered to be built by Manuel Godoy, but unfinished at that time; the house of the Duke of Arcos, owned by Antonio Ponce de León Spínola since 1778; and the Silvela Palace, built in the 19th century as a residence for Adalberto de Baviera and later occupied by Francisco Silvela. 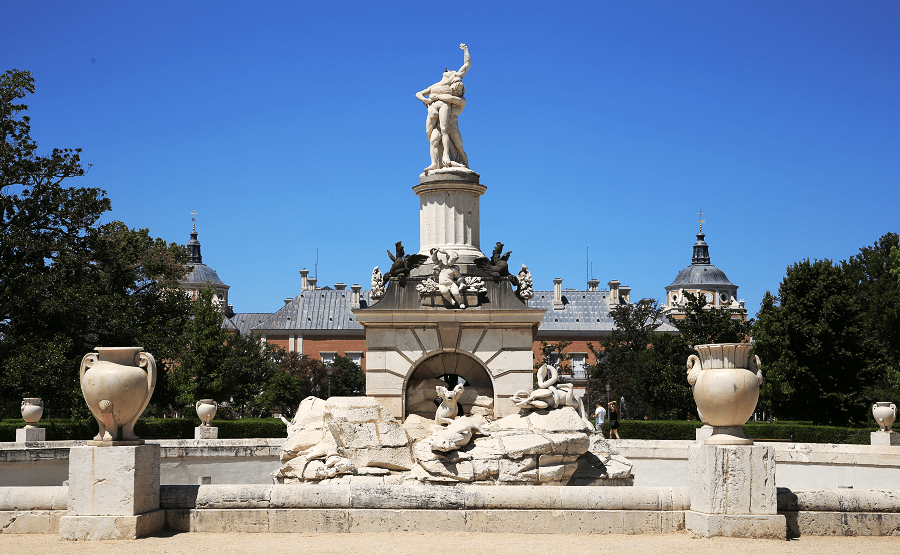 Among the day houses for civil use are that of Diego Agudo de Cevallos, completed in 1758 and intended to be leased to courtiers; the House of the Governor, built by Juan de Villanueva between 1799 and 1802 to house the governor and the offices of accounting, treasury and clerk’s office; the Parador del Rey, the work of Jaime Marquet from 1761 for the accommodation of courtiers and merchants; and the House of Employees, built in 1792 for the homes of Her Majesty’s higher-class servants and which has been the seat of the City Council since 1836. 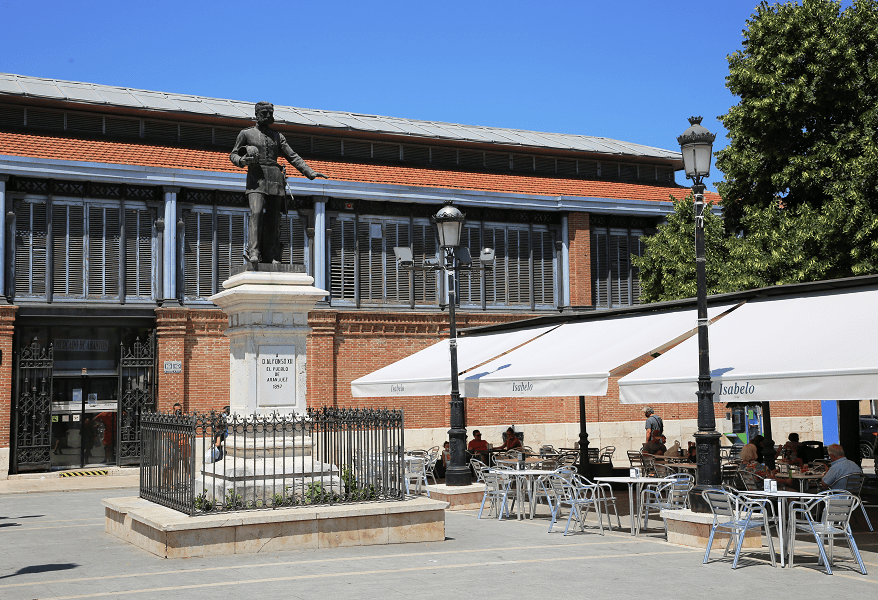 Another set of buildings is that of those destined to develop the well-being of the population. The Teatro Real Carlos III was built according to a project by Jaime Marquet and its façade stands out, like a triumphal arch; the San Carlos Hospital, built in 1775-76 under the direction of Manuel Serrano in order to offer assistance sanitary facilities to royal employees and residents; the bullring, built under the direction of José de la Riva and inaugurated in 1797; and the slaughterhouse. Already in contemporary times, the Abastos market, built in 1893- 94 under the direction of Enrique Sánchez Sedeño according to the patterns of iron and glass architecture, and the railway station, built between 1922 and 1927 in neo-Mudejar style.

Finally, as part of the service to the Court, there was the Casa de Fogones, a work by Santiago Bonavía from 1758 destined to house the kitchens of the palace, and the barracks of the royal guard. 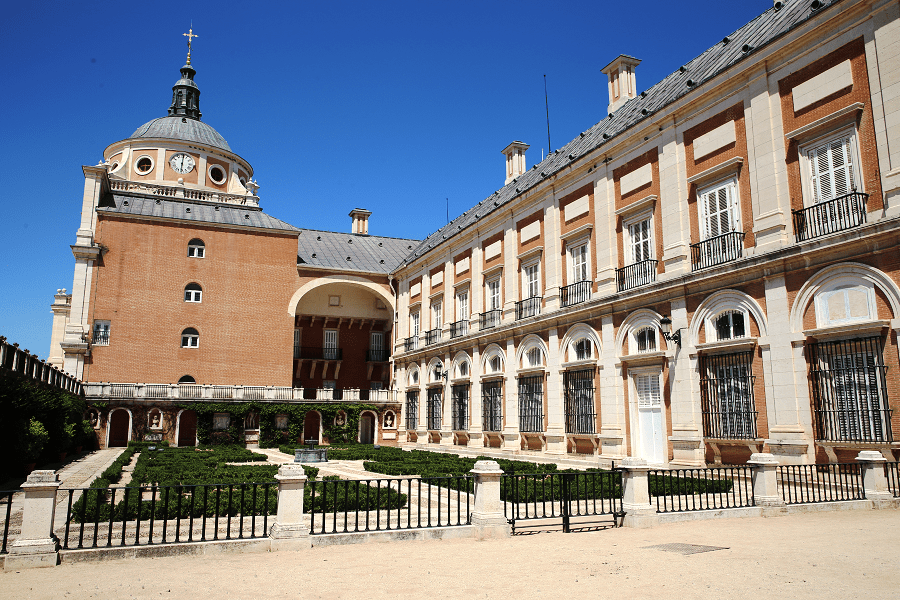 In addition to the church of San Antonio, located in the homonymous square, two other religious constructions stand out. On the one hand, the church of Alpajés, whose construction began in 1681, at the request of the brothers of Nuestra Señora de las Angustias, under the project of Cristóbal Rodríguez de Jarama. It has a Latin cross plan, and in 1744 Santiago Bonavía raised an octagonal dome over the transept crowned by an octagonal dome with a lantern. On its façade there are four cartouches, the lower two with texts from the Lauretan litany and the upper two with the emblem of the Order of Santiago, and the royal coat of arms of Carlos II.

On the other hand, the convent of San Pascual; It was built between 1765 and 1770 and consists of a church, convent rooms and a vegetable garden. The church is the work of Marcelo Fontón and its neoclassical façade stands out: the central body presents the entrance door surmounted by a curved pediment and flanked by Tuscan columns, a window surmounted by the royal coat of arms, and is finished off with a broken pediment. The side streets show pilasters on the lower floor and flanges on the upper floor, and are crowned by turrets with iron bell towers. 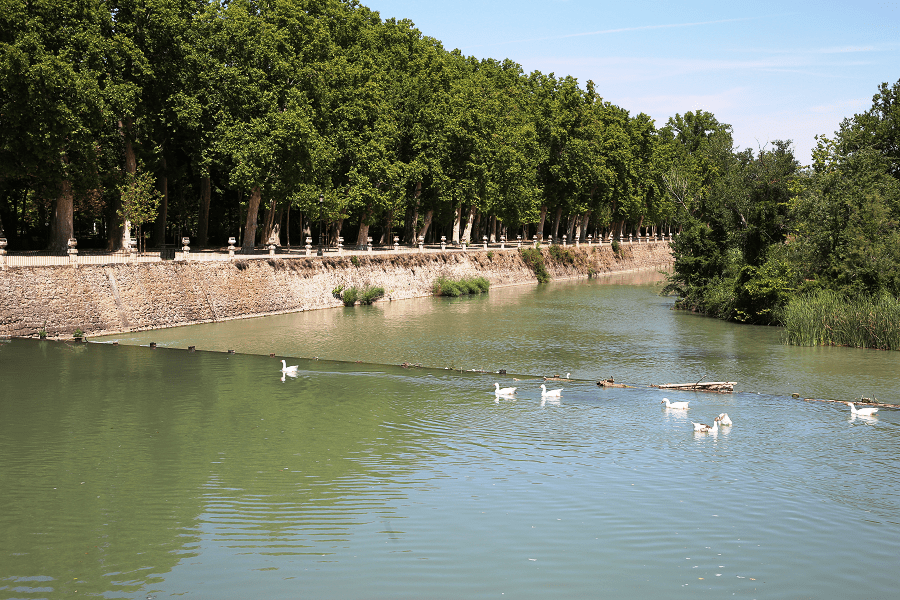 The traditional gastronomy of Aranjuez is based on the products of its gardens and on the hunting tradition of the monarchy. Among the horticultural products, the asparagus – brought from the Netherlands in the 18th century, the strawberries – in their mariguín variety stand out. They are joined by artichokes, cabbages, plums, pears, or apples.

In relation to hunting dishes, those prepared with pheasant – the most emblematic bird of this part of the Tagus valley – stand out, as well as quail, partridges or rabbit. 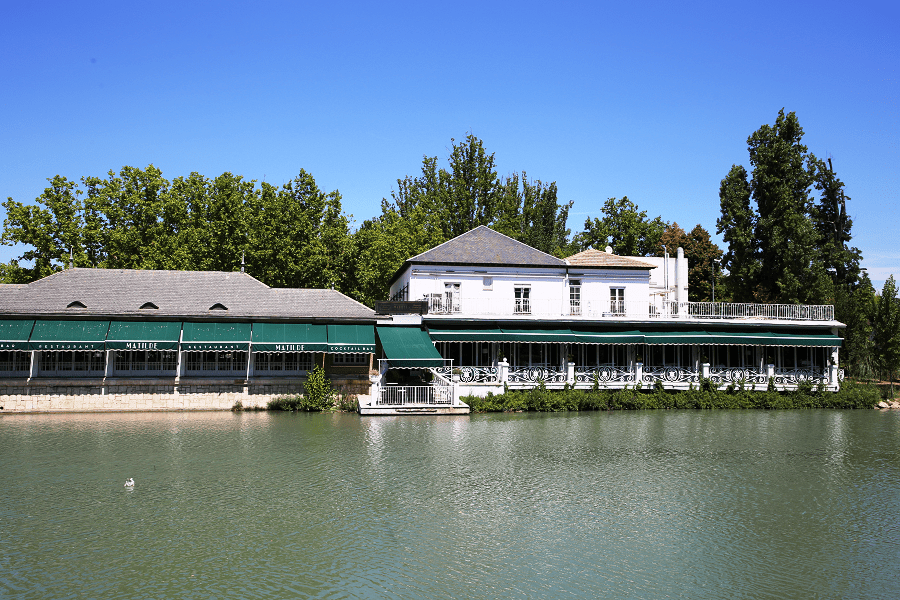 At the wine-growing level, the municipality is within the denomination of origin Vinos de Madrid, with the Real Cortijo de Carlos III winery, which is still active since it was created by Carlos III, and Viñas El Regajal.

Aranjuez railway station building is richly ornamented in the neomudéjar style. It was recently renovated by RENFE, who operate an hourly shuttle service to Madrid and medium distance services to other destinations. The Strawberry train is a special Steam locomotive Heritage railway service provided for summer visitors and tourists. 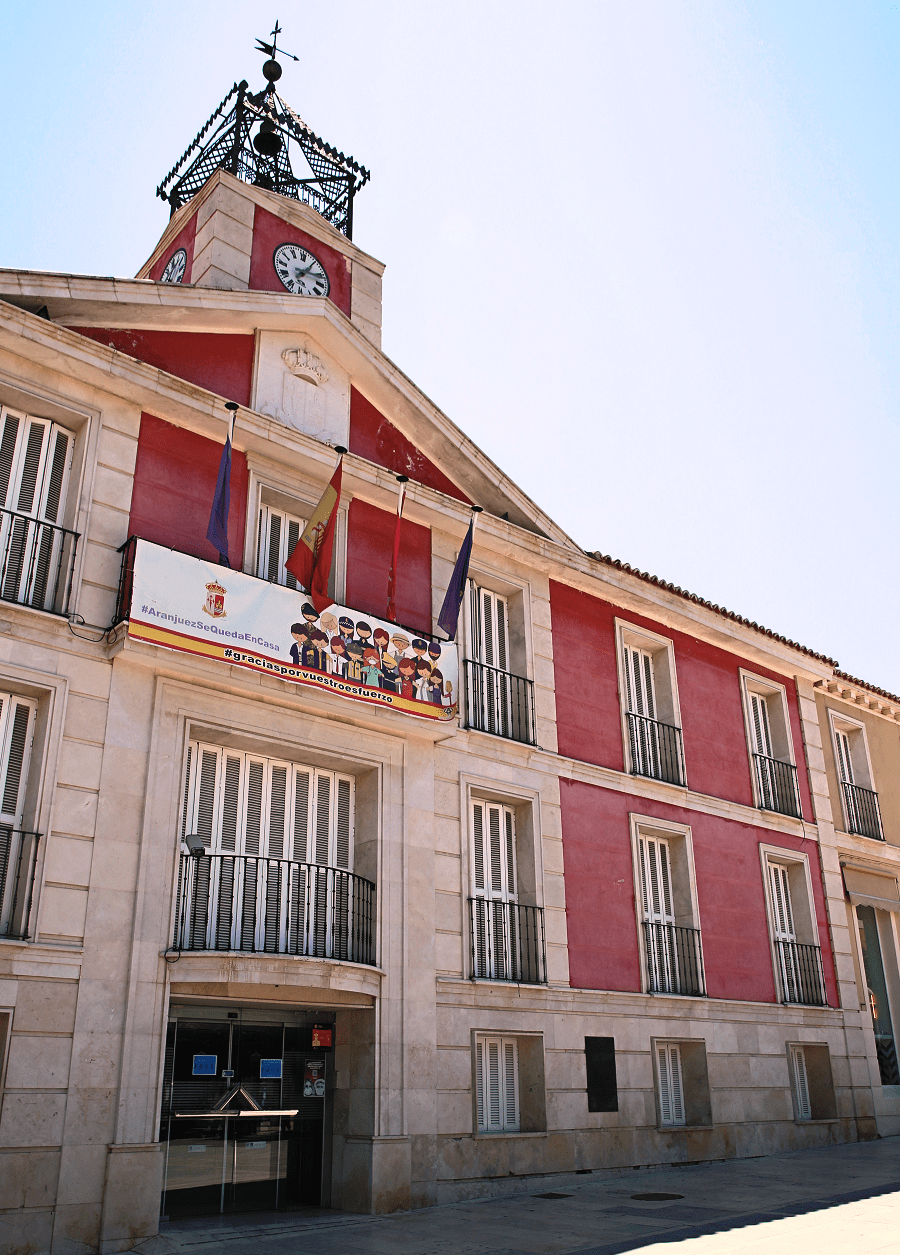 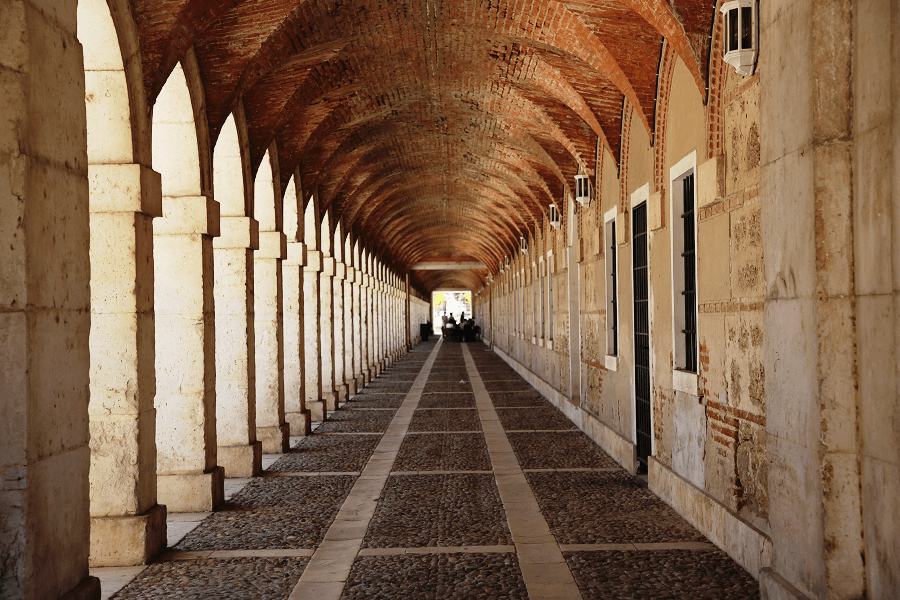