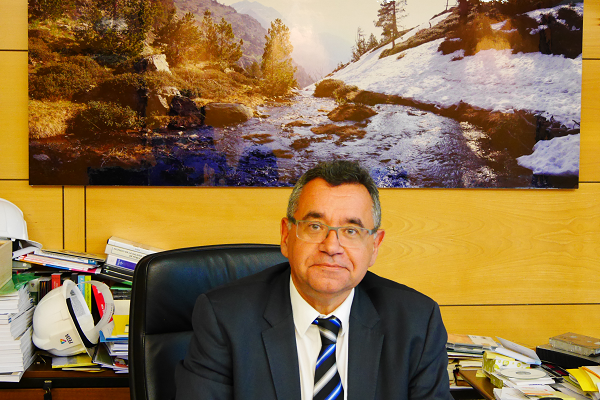 A new law 5/2016, approved by the government of Andorra on 10th March this year, comes into force in June 2016. This law will allow foreign investors to be involved in private projects for the development of the energy sector in Andorra. Albert Moltes Betriu, general director of FEDA (FEDA -Forces Elèctriques d’Andorra), explains to all-andorra.com how FEDA intends to attract investors and how it can change the energy balance of the Principality:

In principle, is it possible for Andorra to have complete independence in terms of its energy?

Full energy independence is not our goal. Local resources are limited due to the size of our country. We have no oil, no gas and the forest area is also limited. Our goal is to make the markets attractive without having a negative impact on prices. The most that we can expect today is to meet the domestic production’s demands of up to 30-40% of the total consumption of electricity and heat in the Principality. Such a model I would call a perfect one.

What is the average electricity consumption in Andorra? And today what is the volume of production?

The only thing that Andorra creates itself is the electricity and heat – producing approximately 15-17% of the total consumption. In other words about 100 GW/h per year.

How has energy consumption changed over the last 3-5 years?

The demand grew from 2006 to 2010. Now the growth trend has stabilized. Last year demand increased by 1%. This year we expect an increase in consumption of about 2-3%.

How does Andorra plan to reduce its energy dependence on neighboring France and Spain?

In the Principality hydropower development has a small amount of potential for the future. Such projects are few and far between, but they exist and are in high demand.

In addition, we are currently in the process of developing a joint project for the construction of a cogeneration plant for the production of electricity and heat (3.5% of electricity production and 4.5% – heat production) in the ski village of Soldeu. For fuel we will use liquefied natural gas (LNG). This is a joint project with the Spanish company Molgas. We have already built the storage tank (LNG), and the project will be completed in September this year. The project will be able to meet all of the electricity and heat needs in Soldeu. Of course, the project will help us to reduce energy dependence on France and Spain, but, on the other hand, its implementation means that we will have a new dependency on imports of LNG.

What is the current percentage of LNG being used for fuel in Andorra and how will it change in the future?

At the moment, the project in Soldeu is the only example of the use of LNG in Andorra. A similar installation will be built in the village of La Comella within the next three years.

Where you plan to buy LNG?

The nearest terminals for us are in Barcelona and Bilbao.

How will the consumption of LNG grow if FEDA provides 30-40% of domestic electricity in the future?

The demand will increase by 10-15 times compared with the volumes that we intend to use for the project in Soldeu.

How do you plan to transport LNG in the future?

First, gas will be transported in the tankers, and after we will construct several such stations. It is possible that we may build a pipeline from Spain or France.

If we talk about renewable energy, how does Andorra plan to develop their use of this type of energy?

In Andorra, there is the possibility to produce electricity using hot springs, as well as by solar and wind energy. But these projects are not cost-effective – the cost of electricity production by these sources is much higher than the price at which we buy electricity from France and Spain. We need very new technologies to increase profitability of production, primarily through the use of solar energy. Currently, we are looking at such developments, but it could take time.

The only cost-effective projects that it makes sense to develop today in Andorra, is hydropower and cogeneration.

Please could you explain why wind energy is so much more expensive in Andorra in contrast to neighboring Spain?

In Andorra it only makes sense to install wind power turbines on the mountain tops using helicopters. However, the installation would be too complicated and expensive, as well as the fact that the potential power generation would be small.

Does the Andorran government plan to encourage consumers who are willing to use solar panels or similar devices for the production of electricity? For example in some other European countries they reduce the tariffs.

So far there are no such plans. One of our priorities is to maintain the competitiveness of energy prices in Andorra compared to neighboring countries, and we must be very attentive to this issue.

What are the main legislative changes that will be made in the near future related to Andorra’s energy market?

In March of this year the government of Andorra has approved the draft law, which comes into force in June 2016. It involves many important changes. The first being that we will create a separate structure, the majority of which will be owned by FEDA (which in turn is 100% controlled by the government of Andorra), and 49% will be offered to investors, including foreign investors. This will allow investors to participate in joint projects with FEDA’s energy development in the Principality. Secondly – there will be concessions, which will be 100% private. In other words, investors will be able to implement their small projects in the energy sector, gaining access to the electricity market of the Principality.

The government has been developing this document for a long time. Expectations are as follows: within the next 2-3 years Andorra has to attract investors and fulfil a certain number of projects so that the volume of production of electricity and heat in the Principality will grow by about a third.

How can FEDA create the interest to attract foreign investors to the market? What guarantees can be given to investors?

Under the new law, investors will be able to participate and implement their own projects, which are cost-effective.
The approximate cost of the projects in Andorra is 15-20 million euros in total. It’s not very interesting for large investors compared to the energy projects in other European countries, or in America or Africa. Those who might be interested in Andorra are more likely to be small players, for whom participation in the development of the electricity market of Andorra can be a good experience and a model for the further development of their energy business in Europe.

What is Andorra’s tariff policy and how much is electricity in the Principality?

The price of electricity in Andorra is quite competitive compared to other European countries. For example, our rates are 50% lower than in Spain and about 15-20% lower than in France. Rates are regulated by the government of Andorra annually. The energy market in Andorra is very small in order to involve many players here. Besides, according to the European Directive, if the number of customers in the market is less than 100,000, such a market does not have to be competitive.

Which equipment manufacturers does FEDA currently use?

You mentioned the profitability of hydropower development. Today how much electricity is hydro and are there any specific projects for the installation of new turbines? If yes, where exactly? And what is the potential of such turbines?

Currently, in Andorra there is only one HPP with capacity of 50 MW. The volume of production is 85 GW/h per year. The remaining 15 GW/h per year are produced from household waste. The Andorran government is preparing a project in the area of hydropower development, the implementation of which will double the production of power.

Are there any plans to privatize FEDA?

As I said earlier, FEDA is a 100% state-owned company, and it will remain as such. However, under the new law, all new projects for the production of electricity, particularly hydropower and cogeneration, and renewable sources can be implemented by private investors alone or in conjunction with FEDA. And they will be able to get some control of the company in which the state will retain a controlling stake. Of course, electric networks are out of the question for our privatization policy.

Does Andorra cooperate with international experts in order to enhance the attractiveness of the electricity market for investors?

Yes, we cooperate with scientists and lawyers in France and Spain.

“The white book of Andorra” –where does FEDA fall within this eco program?

“The white book of Andorra” demands, inter alia, the modernization of electrical networks to ensure quality power and good uninterrupted service for consumers, as well as the reception of energy in the node entries from France and Spain. We have completely upgraded the network from France and are completing similar work on Spain’s part too.
How many charging stations for electric cars have you built in Andorra and how many are planned for the future?
In Andorra there are only 8 stations at the moment with chargers in La Massana, Sant Julia de Loria and in Pas de La Casa. At the end of June there will be a total of 12 stations with such chargers. Among them, we only have three which are powerful enough to charge the car quickly.

Are there many similar chargers in Europe? Is it easy to travel in an electric vehicle, for example, to Spain or France from Andorra?

Unfortunately, despite the plans made 2 – 3 years ago, there are fewer stations than expected. But, of course, on the way from Andorra to Toulouse or Barcelona there are several stations along the way to make your journey comfortable.

How long does it take to charge an electric car?

How seriously does Andorra study the newest technologies in the world energy sector today?

We have a special branch that deals with the issues of diversification, innovation and development in the area of the use of know-how. There is also a separate structure in the government of Andorra – “ActuaTech”/

How does FEDA deal with non-payers, if there any in Andorra? Does the law of Andorra allow them to “switch off” unscrupulous consumers?

Yes, we have this legal right. We have had to use such measures several times, but only in the most extreme cases. There are state social assistance programs – if the consumer is unable to pay for electricity, he can always apply to the government and get a temporary subsidy.