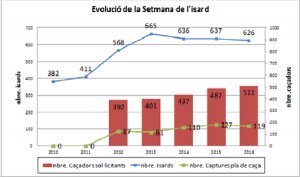 This year’s week of hunting chamois began on 11th September.

According to the Andorran Commission regarding …