Modern art can only be reached through the classics, said the prima ballerina of the Mariinsky theater Julia Mahalina • ALL ANDORRA 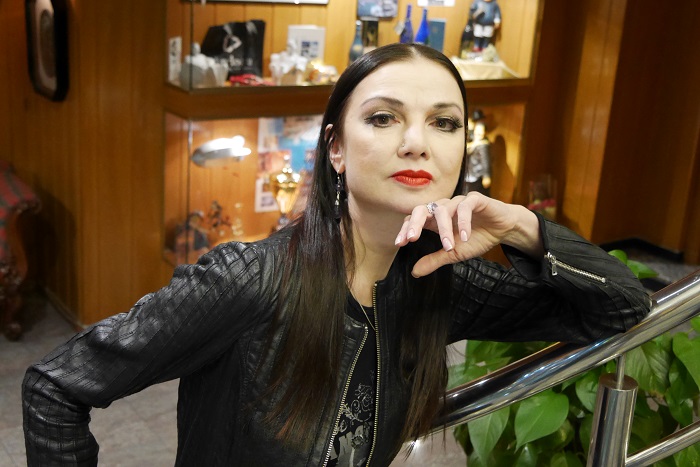 The St. Petersburg Ballet, with the participation of the prima ballerina of the Mariinsky theater, Julia Mahalina, winner of the “Golden soffit” prize (1995) and the “Benois de la Danse” prize (1998) performed yesterday in Andorra. On the eve of the gala concert the prima ballerina told all-andorra.com about her career and the current trends in the world of ballet.

Being a prima ballerina is, first and foremost, a question of talent, hard work, a gift, a responsibility or a mission?

All of them. But first of all, it is hard work. And a gift.

Who or what increasingly influenced your professional career?

When I was three-years-old I started to limp. I had a very serious diagnosis, the disease progressed, and a doctor suggested that I start dancing. My mom took me to a dance school. But I was too little and nobody wanted to take me in. I remember my mom cried. And I remember, a pianist took pity on us and, despite my age, allowed me to attend classes. Then the first day, after class, she told my mom: “Your daughter is a born ballerina.”

Of course, I was not the only one who was told that. But I felt that it was not accidental, I always thought seriously about my choice. Finally, it helped me to become a ballerina.

Your mom probably knew from the beginning that you were born to be a ballerina?

Not at all. My mom and my dad wanted me to become a pianist. I come from a family of pianists, I was familiar with the piano from my childhood. I always enjoyed playing.

How did you start your professional career? How did you get to Vaganova’s ballet school (now the Academy of Russian ballet)?

Fortunately, my serious disease diminished, and I started to have my first success. When I went to the ballet school there were 40 people competing for one place. I was 9-years-old, the youngest girl, but I passed the entrance test.

My first teacher – Irina Bazhenova – worked hard with me. While still a child, I began to take part in performances by the Leningrad (now Mariinsky) theatre, such as “Don Quixote”, “Giselle”, “Sleeping beauty”. Each appearance on stage was preceded by an enormous amount of work. I always felt very tired.

What was your first serious appearance on stage like?

I was only 15-years-old when Konstantin Sergeyev, the ballet dancerand chief choreographer of the Leningrad Opera and Ballet from 1951-1955 and 1960-1970, entrusted me to dance the “pas de deux” in the “Corsaire”, the “Nutcracker” and the “Raymonda” at the Mariinsky. I was in perfect form. However, it cost me a lot… only a small piece of cheese for breakfast and then classes all day.

Then there was the final exam. In addition to the “Nutcracker” I had been entrusted to dance the Black Swan “pas de deux” (from “Swan lake”). Since then, over 32 years, no graduate has dared to dance this dance! I coped with it, and after graduation received an offer to sign a contract with the Lviv National Theater of Opera and Ballet.

But you probably would have prefered to stay with the Mariinsky theatre?

On the contrary, I was very happy with this proposal. But fate turned out differently. In the final examination the chief choreographer of the Mariinsky theatre, Oleg Vinogradov, saw me. “Where’s that moon-faced girl?” he asked the director of the theatre. So, aged 17, I became a ballerina with the Mariinsky theatre.

How difficult was your path from ballerina to prima?

I started in the chorus. I went on tour. All classic ballerinas’ roles are carefully planned, and I only had the chance to get into a performance if I was needed to replace someone. I took a risk. I challenged and I was afraid of nothing. My passion to win crystallized, and I started to get involved in performances.

My fate was to constantly prepare for new and greater challenges. Oleg Vinogradov told me to rehearse the second act of the “White Swan” (from”Swan lake)”. It was very difficult for a young ballerina. He gave me two months – it was nothing. I didn’t know my body well enough. I didn’t have the right muscles. In those days it was not possible to shoot a video during a rehearsal. I was working with the full trust of my teacher. And I relied on my own experience.

The role of Odette is much more difficult than the role of Odile. It was more complicated for me to find myself in this role, to understand my position, to feel the right body lines, and finally to find my partner.

I thought it was the artistic director who decided about partners?

Of course, it is the artistic directorwho decides. But partners can refuse to dance together. This is a fairly common phenomenon in ballet.

Do you think you managed the role of Odette?

Of course, my first Odette was not a chef-d’oeuvre. I was lucky to be working with a soloist of the Mariinsky theatre and a wonderful teacher, Olga Moiseyeva. She worked with the best dancers. I felt that the standard of the corps de ballet of the Mariinsky theatre  improved. It was the heyday of Russian ballet. At that time, we had five of the best dancers: Altynai Asylmuratova, Tatiana Terekhova, Lyubov Kunakova, Olga Chenchikova, Galina Mezentseva as well as their stunning partners: Konstantin Zaklinskaya, Marat Daukaev, Farukh Ruzimatov, Yevgeny Neff, Denis Aliev, Alexander Kurkov. It was a galaxy of famous soloists. We worked together. I watched their rehearsals. They worked with me. And I rapidly improved.

What qualities  helped you most in your career?

I’m a very disciplined and strong-willed person. I never gave myself any let-up. In the evenings I danced in the theatre, in the mornings I forgot my success and went to rehearsals. And so on every day.

I never enjoyed noisy company, late night walks. I hated them. I always thought they were a waste of time. In my spare time I loved writing, drawing. I made sketches of my costumes myself and convinced the costume designers to modify cuffs, to increase the length of a ballet dress by 5 cm, to change the line.

Ballet technique is important, total concentration is important too. But it is equally important to be able to surmount the terrible pain. I remember coming to rehearsals with bandaged legs. Pointe shoes literally burned my feet. During a single performance I usually used five pairs of shoes. My dresser was always waiting for me behind the scenes to help me change my pointe shoes so as not to hurt my fouettés.

In addition to Russia you have danced  with the Royal Danish ballet, the Deutsche Opera in Berlin, the Grand Opera in Paris, in the theatres of Buenos Aires and Boston. Is there a difference in the perception of artists from the Russian ballet?

We were always very well received everywhere. The first leap into the world of international ballet and the first recognition on an international level began with Paris, then we had a big success in America. We were lucky to participate in the international competition in Paris. Oleg Vinogradov was strongly against it, threatened us with dismissal, was convinced that we would damage the reputation of the Mariinsky theatre. But we went, conquered the jury with our energy and brought back to St. Petersburg the Grand Prix of the international competition and the Lumière Brothers Film festival award.

How has the art of ballet changed?

I felt the trend of the development of ballet early on. I saw Nadezhda Pavlova, Rudolf Nureyev… They were the founders of the new trend in Russian ballet. Watching them, I tried to raise my legs higher. I was strongly criticised for it, because it ruined the classic aesthetics of the Vaganova’s school. But then I was supported by Konstantin Sergeyev. Then people wrote about the fact that it was me, who came on the big stage with my famous “grand pas”.

Is it true that Lord Rothschild was a big fan of yours?

It is true. He saw me for the first time in the “Bayaderka” in London, then he came specially to Moscow when we were on tour at the Bolshoi theatre. We had dinner in the Metropol restaurant in front of the Bolshoi theatre. I was invited to his Villa. I was at the peak of my career. But then things began to change: we got a new artistic director, we got new conditions. I was 28-years-old when I discovered myself put aside.

Were you mentally prepared for it?

I knew that sooner or later it would happen. To be a “prima” is an incomparable pleasure. It feels like the whole theater – from makeup artists to dressers – works only for you. You are worshipped, and it acts as a protection. And then suddenly you see that your place is being taken by another ballerina. It was scary… But I promised myself that I would not break. And so my fight started.

To stay in a good form (48 kg), I tried not to miss any opportunity and I continued to dance in show hall, performed with actors, tried documentary movies. I kept searching. So my 18 year break with the Mariinsky theatre was not an oblivion. I knew that I hadn’t put my final exclamation point yet!

I coped with my experiences. Only after that have the feelings of happiness and gratitude come. I returned to the stage. And this is my “bénéfice”.

What are the current trends in the development of Russian ballet?

Unfortunately, there is no development in Russian ballet, it turns towards the West and forgets about its traditions. The Mariinsky and Bolshoi theatres are fighting this trend. But today young dancers are not interested in “suffering in the fifth position”, fouettés and beautiful arabesques.

Do you have students? What do you teach them?

Yes, I teach at the Mariinsky and Mikhailovsky theatres. I teach my students that they need to feel classical dance from the inside. I don’t explain how to place their hand, but I explain what I am thinking when I make this or that moment. What feelings I put in my hand. It is how my teachers worked with me. Modern art, in my opinion, can only be reached through the classics.

I try to make a musician feel what I feel, said artistic and music director of the Jove Orquestra Simfònica de Barcelona