Born in Indianapolis, Indiana, USA, in 1938, Robert Rÿker wanted to play the tuba from the age of five, but he had to wait before taking up this large instrument. His father was an insurance agent, and the family often moved. Riker changed schools many times, but since he played the tuba well, he was always welcomed in the school music group. In Minneapolis, he founded his own group when he was 12 years old.

Robert Rÿker studied at Indiana University in Bloomington, where he pondered his future career after graduation. Although he loved the tuba, Robert Rÿker did not want to be a trumpeter for the rest of his life. When he was 35 years old, he left Montreal to teach conducting at the Peabody Music Conservatory in Baltimore. After receiving his doctorate, he directed the Calcutta Symphony Orchestra and several small orchestras in Canada.

Robert Rÿker arrived in Tokyo in 1981, where he was invited to perform as a guest of the Japan Philharmonic, Tokyo Metropolitan Symphony, Tokyo Philharmonic and several other orchestras. Tokyo Sinfonia was founded in 2006.

Please tell us a few words about the story of the The Tokyo Sinfonia?

Group dynamics theory says that the largest group in which each members feels himself essential is five. Accordingly I decided that the Tokyo Sinfonia should have five members in each of the largest sections (the violins), and scale down proportionately in the lower sections.

The sections are seated so that the Violas sonority is favored, making an effective bridge between the lower strings and upper strings to meld the total column of string sonority.

All players within the sections rotate from programme to programme. Accordingly, every player has opportunities to serve as the section principal as well as to sit in every other chair in the section (all 10 violinists rotate back and forth between the two violin sections).

The Tokyo Sinfonia repertoire comprises now more than 500 special arrangements in which each player has a separate and distinct part. The 19 separate parts facilitate an interactive sound spectrum from the orchestra.

The players in the Tokyo Sinfonia have a high degree of technical proficiency. My job conducting this orchestra is primarily to infuse their conceptual performance with the character of each piece of music we rehearse.

Our audiences constantly praise for Tokyo Sinfonia performances for the range of emotional coloring in the playing.

Do you play Japanese music? Please, tell us the names of the brightest contemporary composers of Japan.

Our repertoire now covers the music — especially the neglected masterpieces rarely heard in concert performance — by the world’s great composers. We have performed music by over 100 different composers, including Akutagawa, Hisaishi, Miyagi, Otaka and Takemitsu. We do not focus on the work of contemporary composers.

Are there many classical music lovers in Japan?

There are eight orchestras in Tokyo, including the NHK Symphony, Tokyo Symphony, Tokyo Philharmonic and Yomiuri Nippon Symphony. Each of them consists of 70 to 110 musicians. At NHK, one of the largest in the world, there are 113 musicians and an annual budget of several billion yen.

Tokyo Sinfonia has 19 musicians. We cannot compete in sound with a large symphony orchestra. Therefore, I had the idea to reorganize the works of great composers. I began to restore rarely performed works. I noticed that Mozart had two solo violinists for his Concertone. Instead of repeating the same material, I decided to make the concerts more interactive. However, sometimes it takes a long time to prepare for a concert; for example, it took months to restore Brahms’ works.

You decided to continue your concerts. How do they go these days?

Public reaction to the coronavirus crisis is seriously eroding transportation, manufacturing, services, education, entertainment and the arts. It also threatens the livelihood of our musicians and, indeed, the very survival of the Tokyo Sinfonia.

The orchestra receives no government or foundation support but relies for operational expenses almost entirely upon income from our performances. If we cannot perform, we do not exist.

We face a serious threat and an unpredictable future is ahead. As professional musicians, we choose to face this threat by making and sharing our music, however and wherever we can, for as long as it is possible.

Article after article in the news today deals with some aspect of the vicious virus beleaguering the world. There are two sides to every question, and certainly there are no error-free answers to the dilemma of today.

We decided to perform last Wednesday, just a week ago, in splendid Oji Hall in Ginza, in the heart of Tokyo.

Following the announcement of our decision to perform, we received a scathing message from a professor of health science of one of the universities. Such a decision is crazy, he wrote; everyone should stay home. Of course, he is right too. There are no error-free answers to the dilemma of today.

But Wednesday we played. We did it for you. On March 18, we performed our last concert. We had an excellent audience response to all three Bizet selections: four Bohemian scenes, a Symphony in C (major) and a Symphony in C (minor) “Roma”. 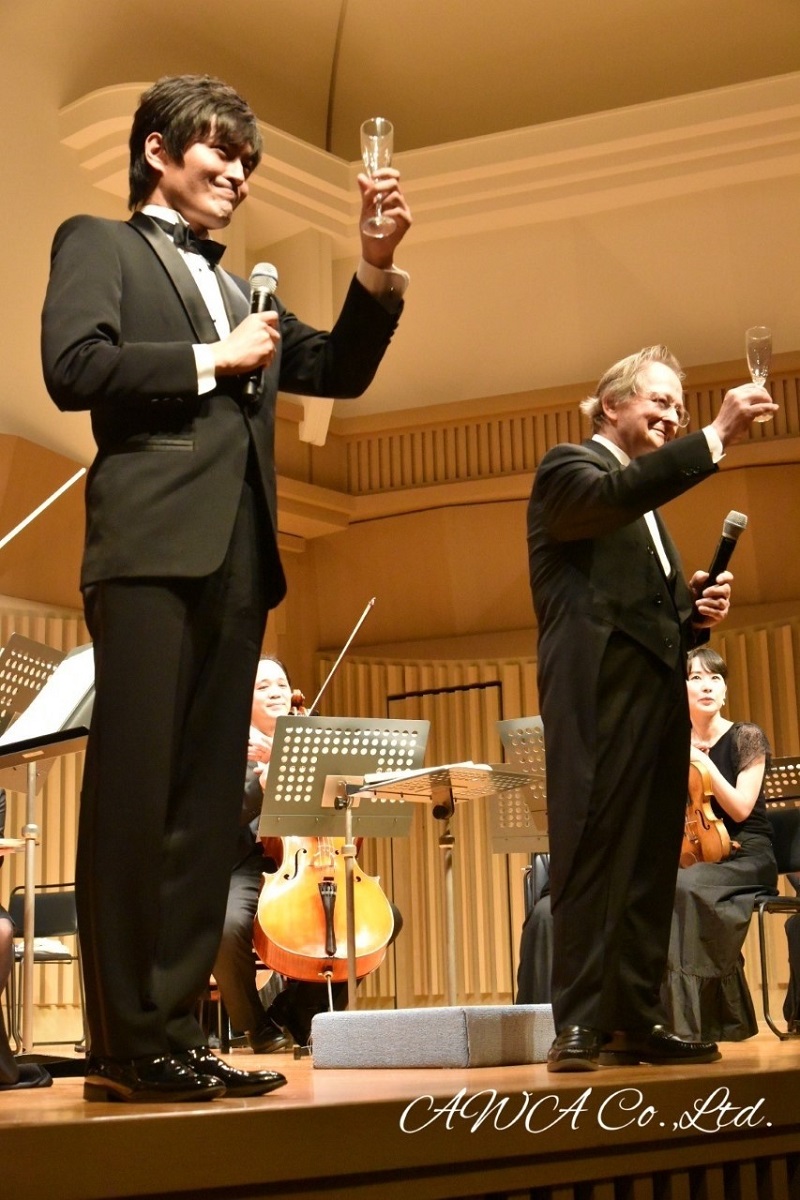 Our special guest was vocalist Chikahiro Kobayashi. When he asked the audience: “Which of you are true fans of classical music?”, only half a dozen hands went up. Attracted by the popularity of our special guest, who is new to classical music himself, 90% of our audience said they were attending a classical concert for the first time.

You invited Chikahiro Kobayashi to the stage and put him among the musicians. What were his feelings?

Yes, we did it. We wanted him to experience the power of the music vibration around him. Then we asked him to comment on how he felt. He said that for him it was a valuable experience. He wrote us the following: “I felt the vibration of sound and the love of musicians. Robert winked at me during the performance; I fell in love with him…”

In general, did many people attend the concert?

As for the paid audience—there was about a quarter of the hall. There were also a few guests.

We worked hard to prepare this program in an atmosphere of stress. Despite the tightly packed rehearsal schedule, we gave our listeners a lot of great music on the day of the concert on March 18. Everyone was happy, including the musicians, our special guest, our producer, and the staff at Oji Hall (Tokyo Concert Hall). 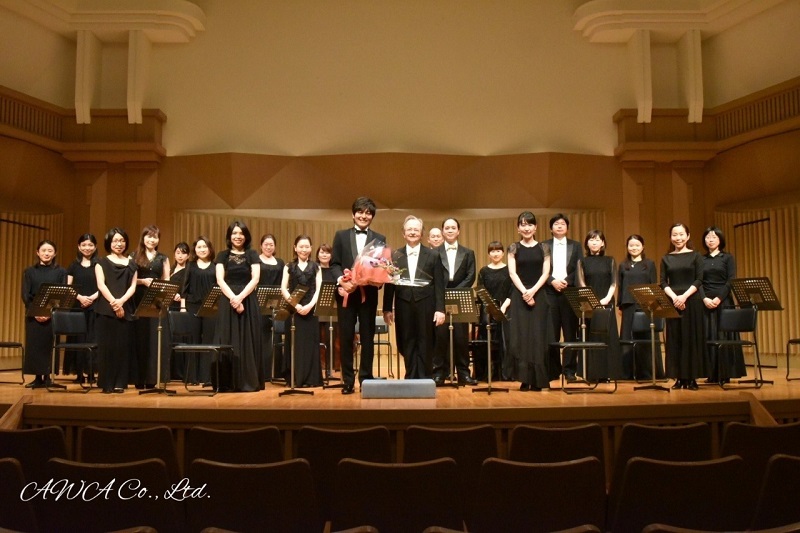 What are your favorite composers and why?

Let me go through my list and choose about 10 works I am greatly fond of.

These works — and many others – touch my spirit deeply.

How long have you been performing on stage?

I was appointed principal tuba of the Fort Wayne Philharmonic Orchestra in September, 1955.

What would you say about the audience’s perception of music? Has anything changed over the years?

Over the years audience seem to have become generally more aware and more sophisticated as to what satisfies them.

What are the plans for Tokyo Sinfonia for April, if only one can predict it?

Our performance at Oji Hall this week was the only performance in this wonderful room in March. Perhaps our concert will be the only concert here in April too. I hope that by this time none of our musicians will get sick.

Relative calm is observed here, but chaos seems to flourish in Europe and America.

We got many compliments after the last concert. Someone was impressed by the instrumental technique, for example, playing koto (Japanese string musical instrument). Someone wrote that the energy of music is much more important to him than food.

We also received a letter like this: “I am writing to support your decision not to be silent. As many people as possible should share those great feelings. Those who trade freedom for security do not deserve either of these. Taking precaution is one thing, but turning off the world is another. I believe you made the right decision.”

Our listeners also wrote to us that they saw the sound. Live performance stimulates all five senses, that much is true!

The splendid soloist we had planned to feature in April, soprano Tanja Kuhn, has had her flights cancelled, her travel insurance cancelled, her professional engagements cancelled and, along with everyone else in Germany, she is disallowed from leaving her home. We have maintained a constant dialogue about what we can do to get her here at some time in the future.

In the meantime, the Tokyo Sinfonia will keep on playing. We have a human obligation to keep playing for our precious audience whose hearts are filled with what we do. And as professional artists we have to keep on playing in order to keep up our standards. We have to play. We will of course take all proper precautions to maintain sanitary surfaces, wear marks and maintain distances, just as we did last week.

What should we play instead which would be likely to please everybody, novice and aficionado alike? Tchaikovsky!

We have chosen to perform three of the romantic Russian composer’s works which will be as intriguing and rewarding to hear as was the programme which generated the fervour cited above. His passionate Hamlet Fantasy-Overture. Tchaikovsky’s great tribute to his favourite composer, Mozartiana. And the charming set of 12 miniatures Tchaikovsky composed for each month of the year, The Seasons.

Wash your hands and gargle, and probably wear a mask, and we’ll see you in Ginza at Oji Hall!

What do you dream about in a professional sense?

What inspires me? There is so much great music which has been neglected that welcomes the chance to be heard. Young audiences who have a chance to hear my performances inspire me with their personal discovery of the beauty and power of great music. Beautiful people and great performers inspire me. My orchestra inspires me. The music itself inspires me. I am just a romantic at heart. You have inspired me too, Irina.

Simona Kust: I’m a kind of person that thinks freedom is something that everybody must have