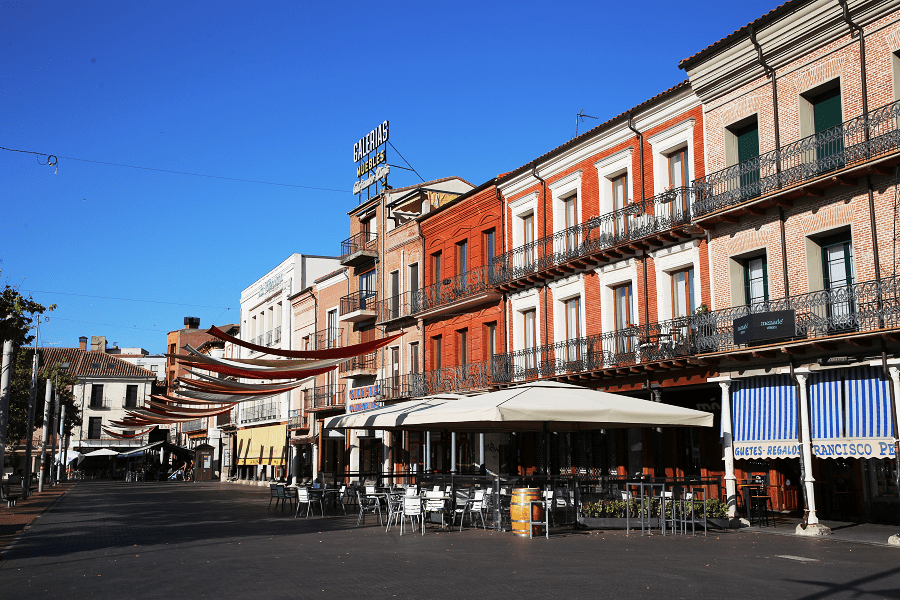 Medina del Campo is a town and municipality located in the autonomous community of Castile and León, province of Valladolid, Spain.

It is the capital of the Rueda Denomination of Origin, an important area dedicated to wine for centuries throughout the region, with more than 80 wineries. Wines with a Rueda Denomination of Origin were court wines at the time of the Catholic Monarchs. They are produced from a range of verdejo grapes, and to a lesser measure from Sauvignon blanc cultivars. Under this appellation there are white, sparkling, red, pink and liquor wines. 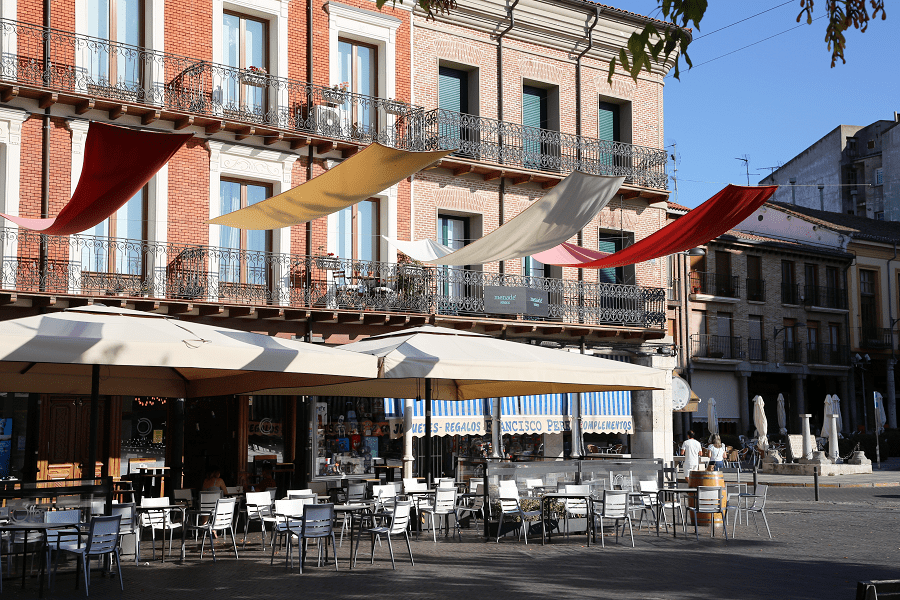 The Castle of La Mota is so named because of its location on an elevated hill, a mota (in Spanish), from where it dominates the town and surrounding land. The adjacent town came to be surrounded by an expanding series of walls in subsequent years, of which little remains. 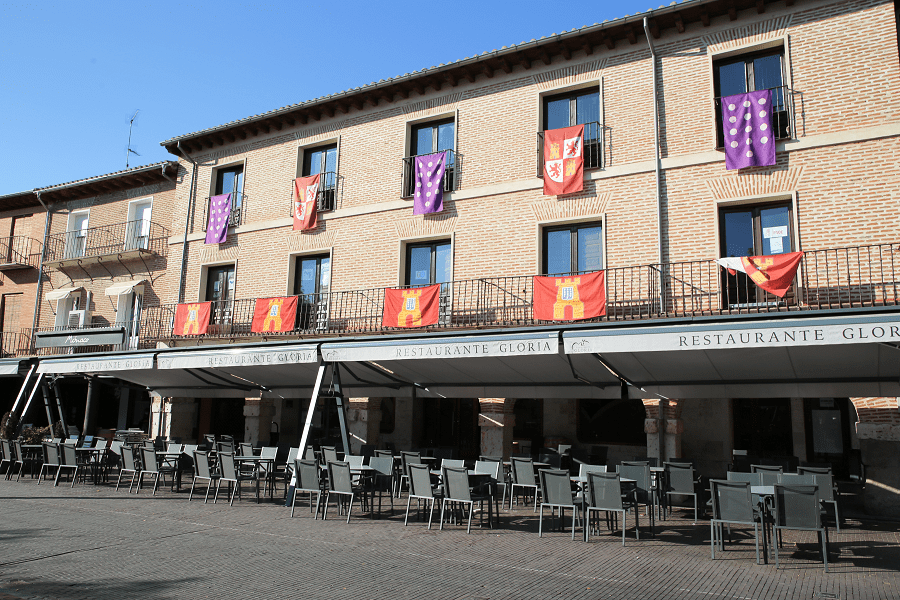 Medina was a walled village, and its stronghold was a very important building around the town to protect the people from attacks. The walls date from the 11th century, and they were enlarged three times, as the population was growing. At present, there are only remains.

The Plaza Mayor de la Hispanidad is an immense horizontal and open space, bounded by sheltered buildings that house shops, banks, restaurants and administrative services that mark the pulse of the town. In this place, an example of the genre of rectangular squares and predecessor of the one in Valladolid, the fairs of the 15th and 16th centuries were held where each union had its own space. In the Plaza are the large buildings of Medina del Campo representative of the three traditional powers: the Church (Collegiate Church of San Antolín), the Monarchy (Royal Palace) and the Municipality (Town Hall). 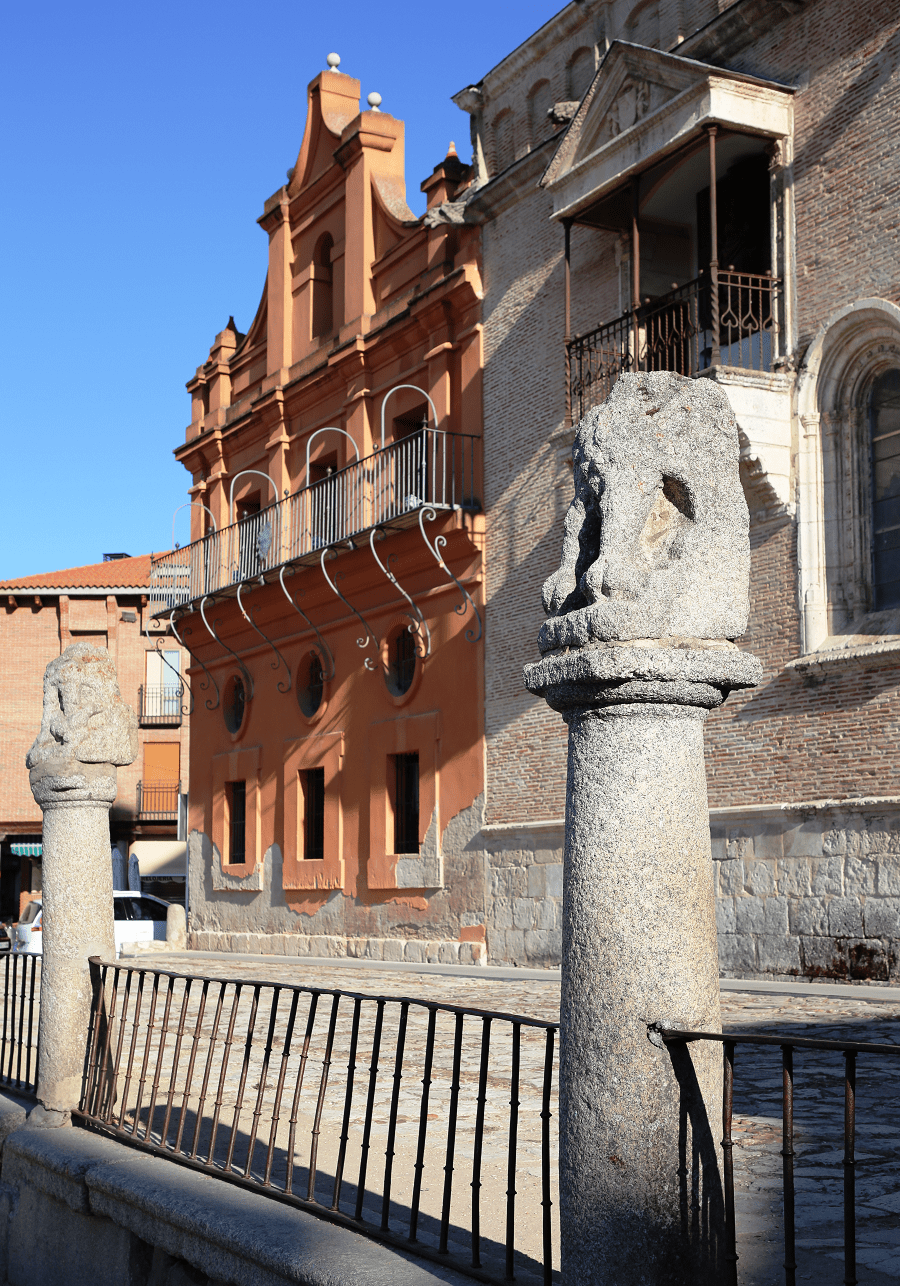 Town Hall: in the middle of the seventeenth century the Consistory decided to move the Town Hall from the river bank to the Plaza Mayor, on the site of the old slaughterhouse. Francisco Cillero and Mateo Martín directed the works of the current building during the different celebrations that took place in the Plaza Mayor. The main façade, completely symmetrical, is made of granite stone with large ashlars, with two continuous balconies, one per floor, to host the authorities during the celebrations. The façade of Carrer de Gamazo, with its two stone arches, surely reused materials from the previous town hall building. 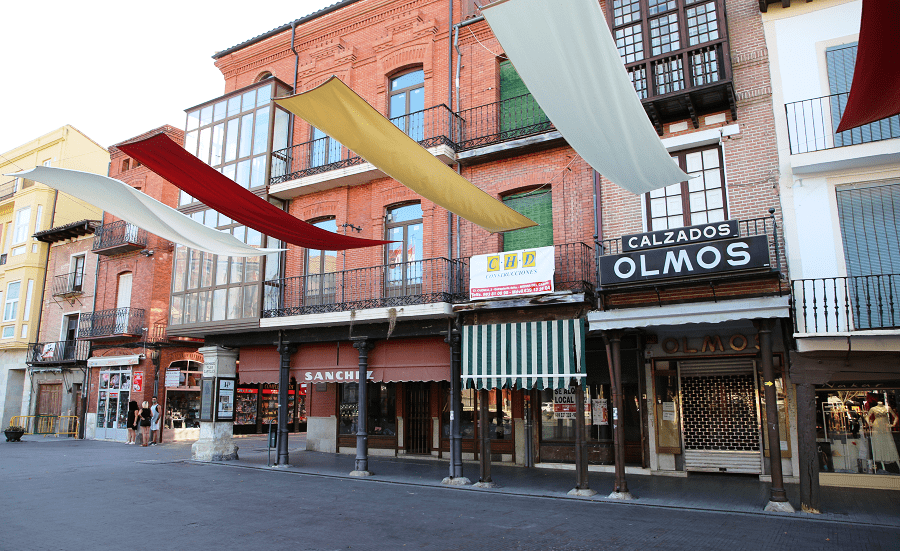 Royal Palace was the residence of the royal family in the time of Fairs. In this palace many historical incidents happened during the 14th and 15th Centuries. The most important episode was the will and death of Isabel la Católica (Queen of Castile), 26 November 1504 (for this reason it is also called Palacio Testamentario, Testamentary Palace). 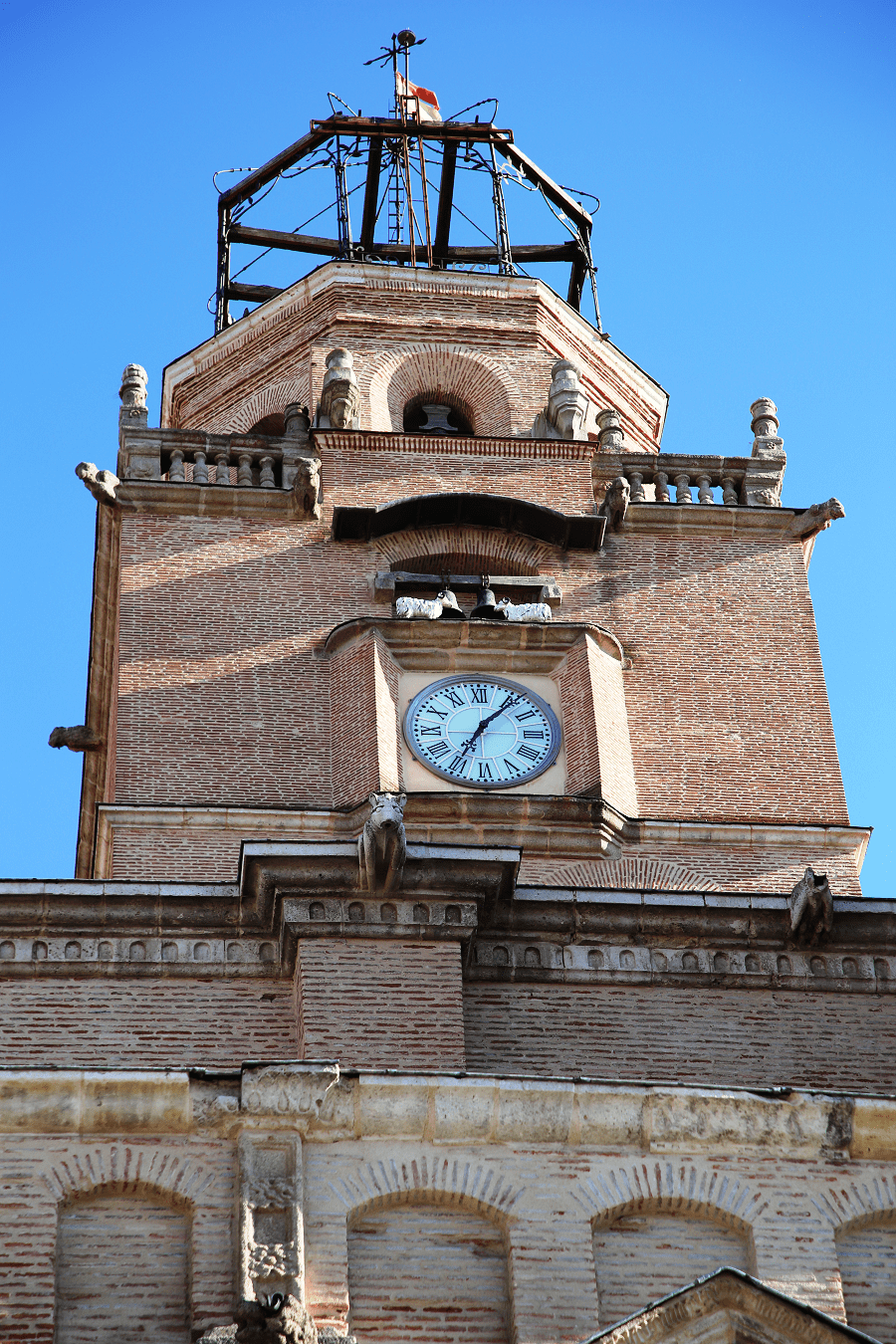 The Palace was started in the 14th century and was enlarged both by Don Fernando de Antequera (Lord of Medina del Campo and, afterwards, King of Aragon), as well as by the Reyes Católicos. It was restored three times, in 1601, 1603 and 1673. It was at one time much larger than the present-day building. 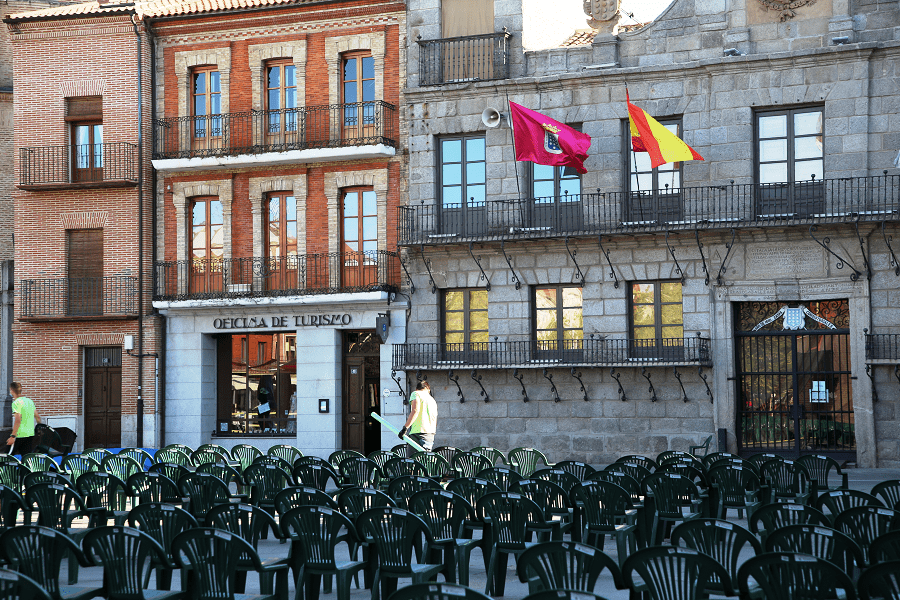 Collegiate Church of San Antolín, dedicated to St. Antoninus of Pamiers (San Antolín), is in Gothic, Renaissance and Baroque styles. It was constructed between the 16th century and the 18th century. The nave and the aisles are of Late Gothic style, with numerous chapels, such as the Chapel of the Virgen del Pópolo, with a balcony, which was used to celebrate the mass for all the market traders lodged in the Main Square. The Collegiate Church of Medina was restored in 2004. 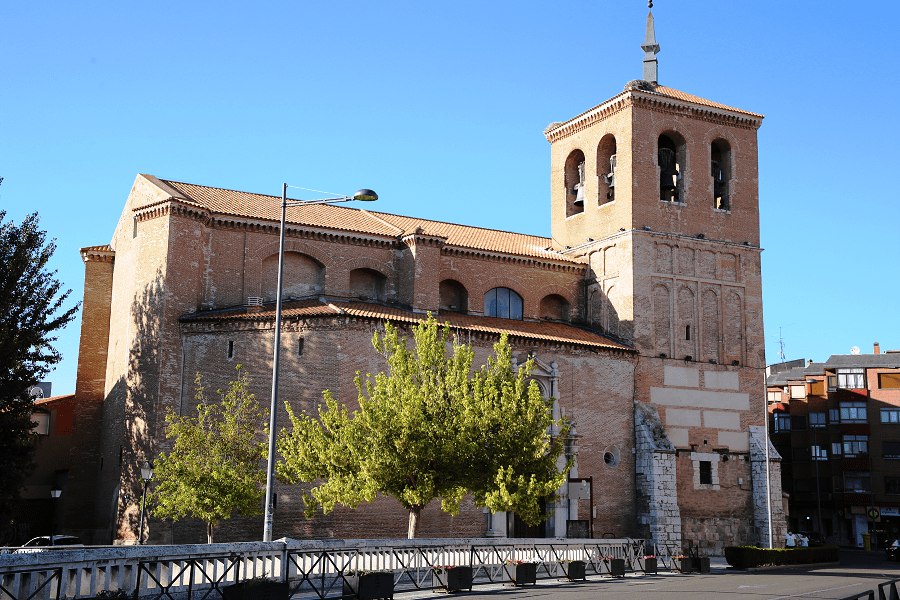 St. Michael’s Church was built beside the wall gate of the old town, opposite the original city hall, which no longer exists. Probably, its entrance hall was the meeting point of the council. The oldest part of the church is of Mudéjar–Gothic style; but was renovated several times. The greater chapel has large dimensions, with Gothic ribbed vault roof and an interesting altarpiece dated from the 16th century. 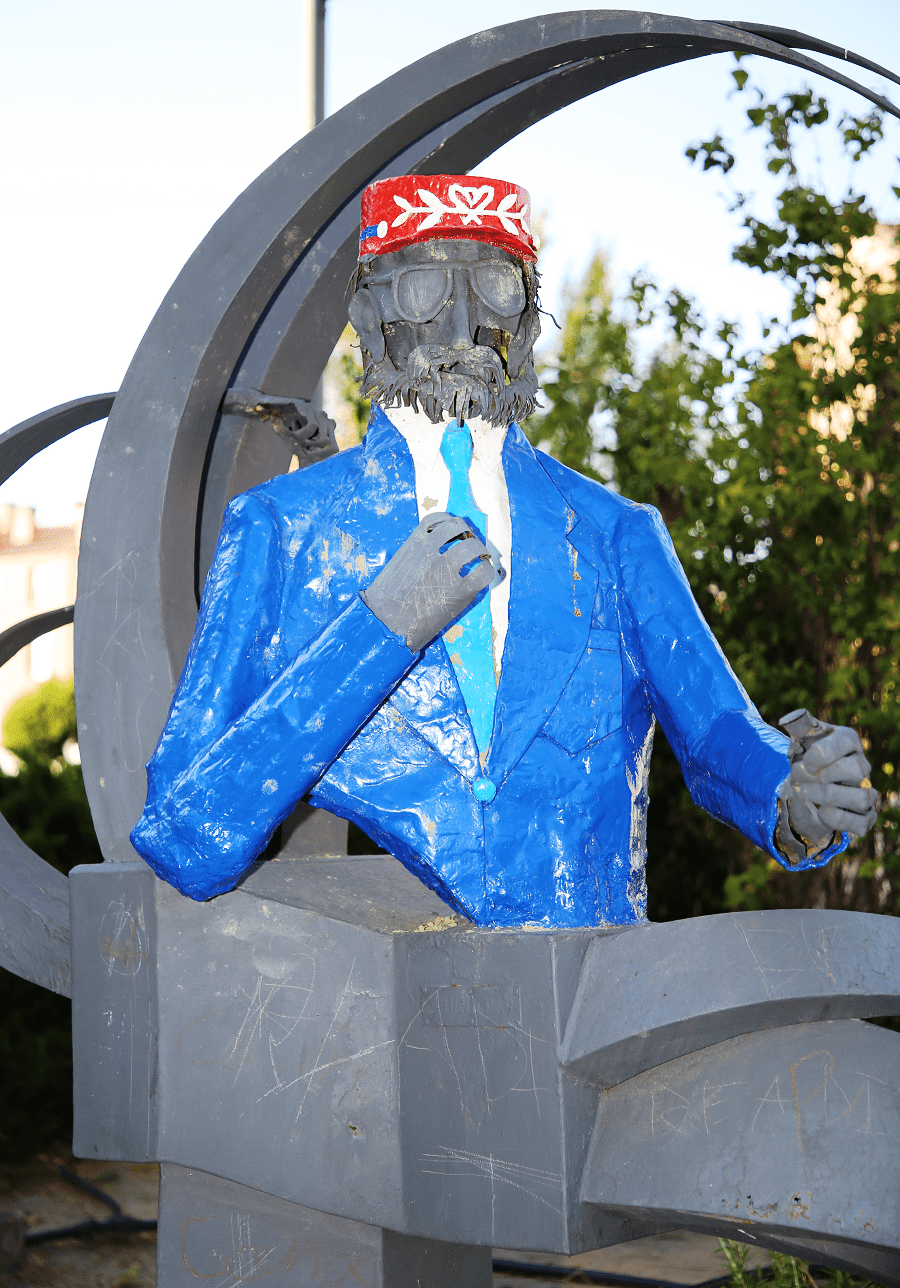 Las Reales Carnicerías is an ancient market-hall, in Spanish called Mercado de Abastos, on the left bank of the Zapardiel brook, was built under the Catholic Monarchs in 1500 in Renaissance style. Later, in the reign of Philip II, it was used for the sale of meat to the population. It is the only historic building of this type in the world still used for its original purpose.

Convent of San José (MM Carmelitas) – first foundation that Santa Teresa de Jesús establishes outside her hometown. In 1577 the closed area, the garden and the chapel were already in use. In 1603 the church was practically completed, which can now be seen following the traces of Francisco and Andrés López. It has a single nave with a barrel vault with lunettes. 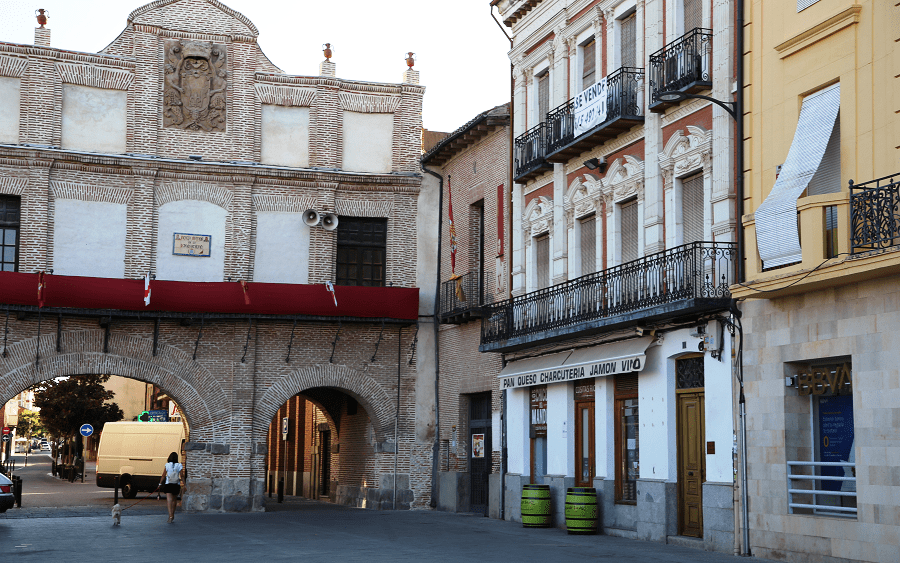 Convent of Santa María Magdalena (MM Agustinas). Rodrigo de Dueñas, Carlos I’s finance councilor, dedicated part of his assets to the founding of a convent complex that would invite the young women of “disorderly life” who would serve to impart basic teachings to the children of poor families.  The Gothic church has the entire chancel decorated with frescoes by Luis Vélez. 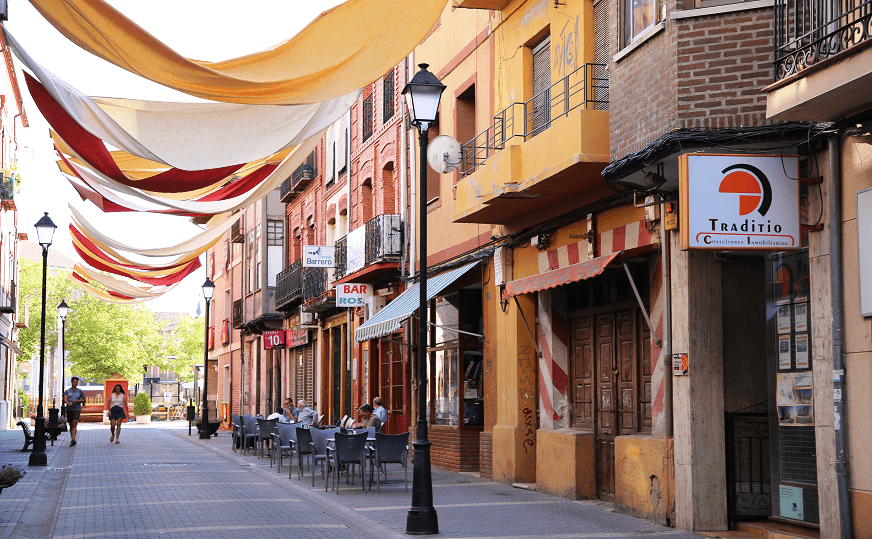 Monastery of Santa Clara (MM Clarisas) considered the oldest convent complex in Medina documented in the mid-13th century as the monastery of Santa Eufemia, built on a temple dedicated to Saint Catherine, it preserves an extraordinary archive of medieval manuscripts. The oldest part of the convent is from the 16th century. The rest of the buildings are no more than half a century old and are the result of the reconstruction carried out by the Franciscan Poor Clares mothers after the fire that destroyed the monastery in 1960. Inside the church they keep a magnificent oil painting of the Virgin of Antigua and a Gothic Christ on the main altar. 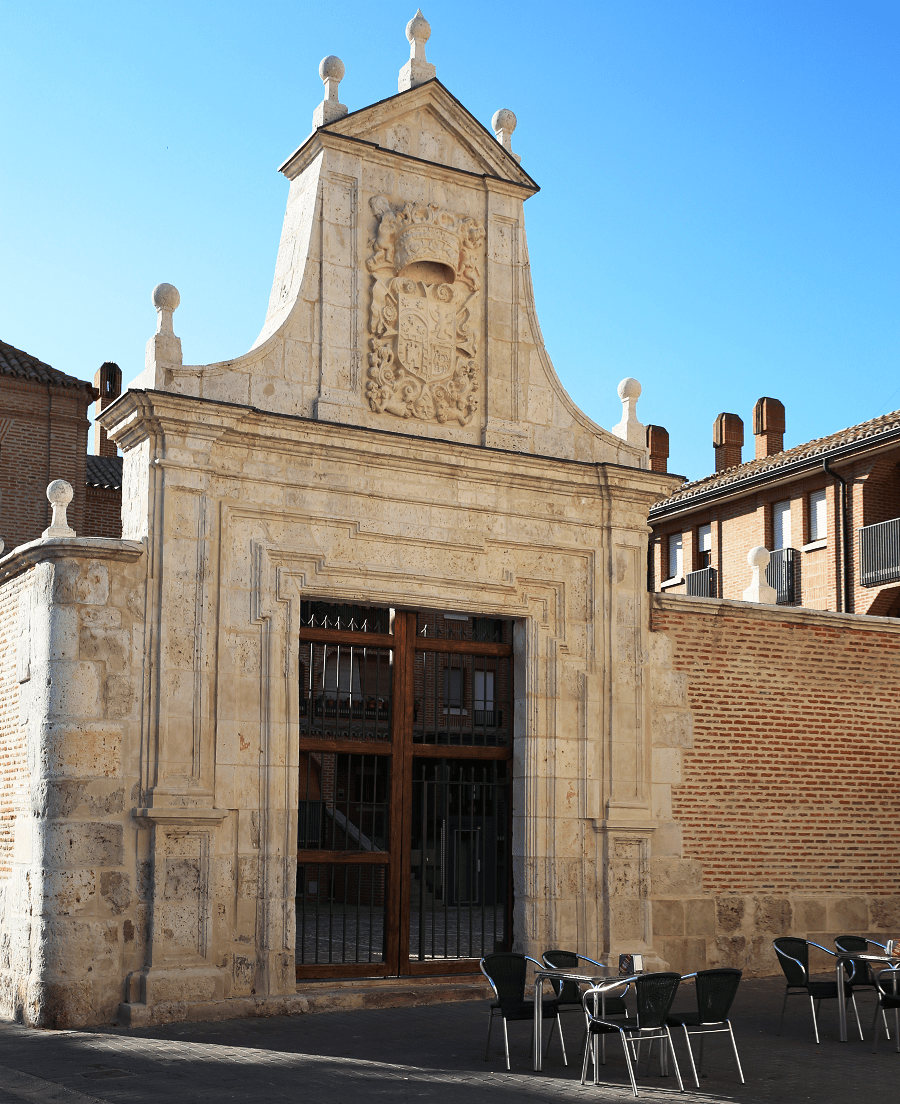 The Palacio de Dueñas is a Renaissance palace designed by Luis de Vega commissioned by the Councilor for the Indies, Dr. Diego Beltrán and his wife, Ms. Ana de Mella. It is an excellent example of an urban palace whose main element is the splendid porticoed patio in which the medallions carved by Esteban Jamete stand out, representing the kings and queens of Castile. It currently serves as a teaching center. 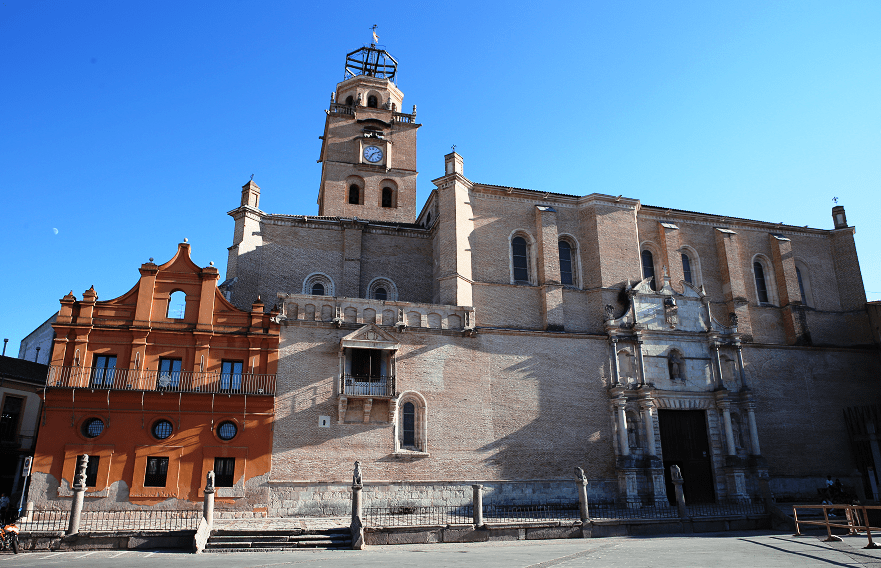 La Casa del Peso (The House of Pounds) stands in the Main Square and is built over five elegant arcades with long balcony. It was established in the 17th century in order to keep the “Peso Real” (Royal Weight) and to guarantee the official weights and measures.

The Museum of Fairs – the only museum of its kind in the country, it illustrates the history of the usual merchandise and financial fairs in the 15th and 16th centuries, which placed Medina del Campo in a prominent position at the time. It has a permanent collection and houses temporary exhibitions. 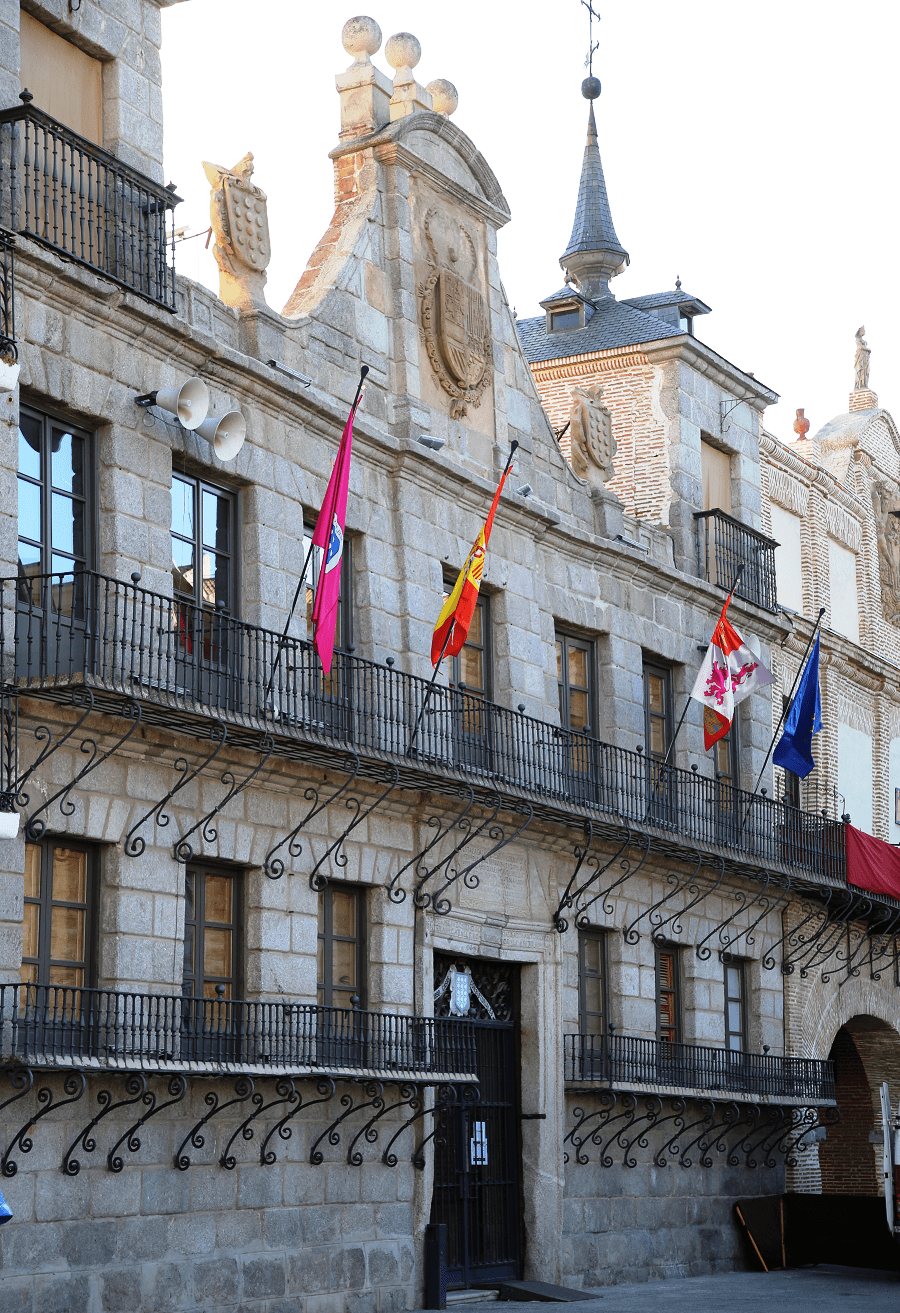 Medina is an important railway junction in the north and northwest of Spain. Since 2006 the North-Southwest Spain High Speed Corridor (AVE) of which it is a part has been developed. Since 2016 it has a new AVE station on the Madrid-Galicia line, located on the Las Salinas highway. 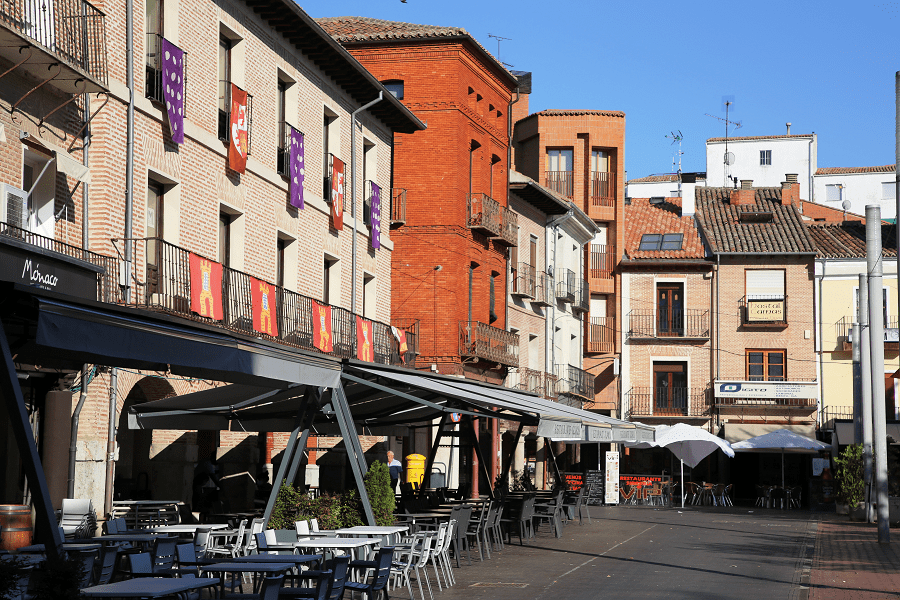