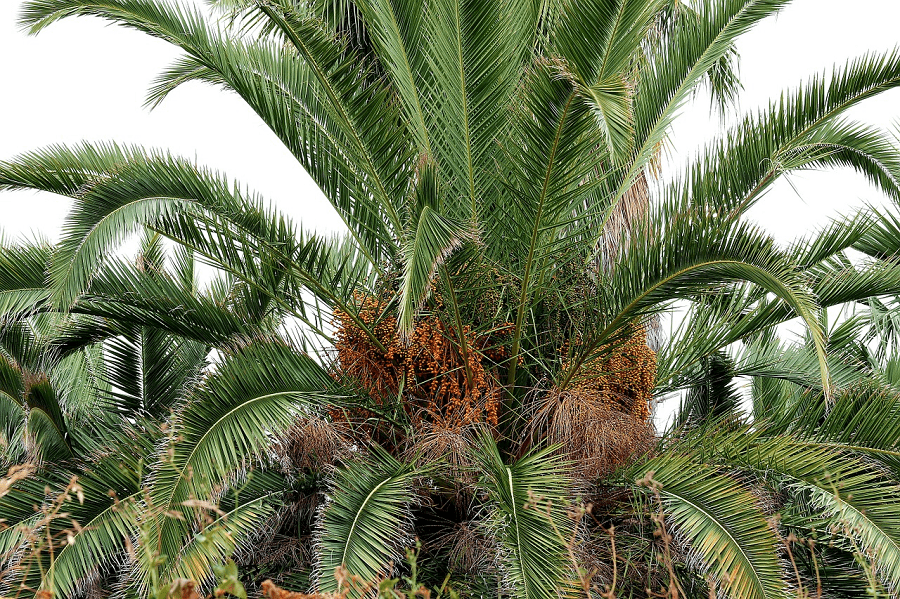 Elche (in Valencian and officially Elche) is a city and a municipality in Spain located in the province of Alicante, in the Valencian Community. Capital of Bajo Vinalopó comarca.

The Palm Grove of Elche (Palmeral) is declared a World Heritage Site and a Masterpiece of the Intangible Heritage of Humanity, respectively, by UNESCO. These symbols of Elche identity are one of the main tourist attractions of this city. 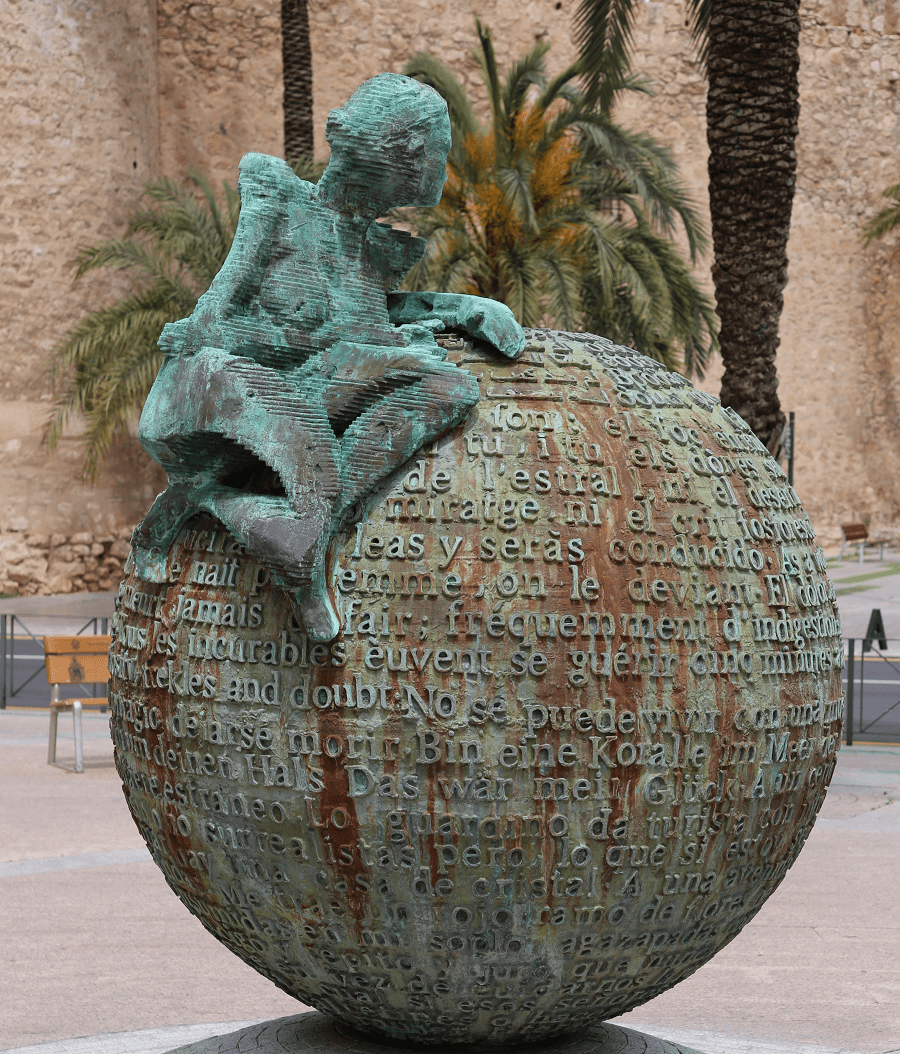 The Palmeral is the only palm grove in Europe with North African origins and the largest on the continent. The Palm Grove also constitutes the northernmost and one of the largest palm groves in the world. Today, the city of Elche contains 97 orchards composed of 70,000 date palms, concentrated in the east bank of the Vinalopó. Outside the Elche city domain, other large plantations contain approximately 130,000 date palms. In total, Elche and its vicinity hold 200,000 palms.

Elche is the only place in the world where the artisanal elaboration of the date palm persists. The city council sends the palms annually for Holy Week to the Kings of Spain, the Pope and the government officials of Spain. 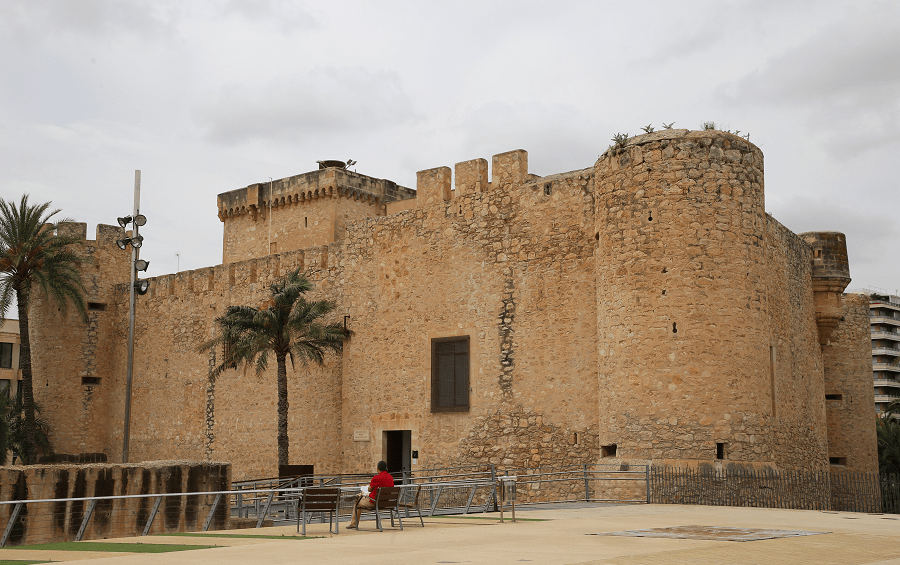 According to legend, in 1370, a chest was washed up to the seashore near Elche by waves, in which manuscripts with the biography of the Virgin Mary were found. The found recordings served as a script for staging a theatrical action, which since then has been going on every year, at the same time, and in the same place – in the Church of Santa María.

Following the medieval tradition, only male performers take part in this action.

In 1980, “Mysteries” were given the rank of a cultural tradition of international importance, and in 2001 UNESCO included the performance in the list of masterpieces of the intangible heritage of mankind.

By the way, the current sculpture of the Virgin is only a copy of the one that was lost in a fire in the church during the Spanish Civil War in 1939.

The Minor Basilica of Santa María or Archpriest Church of Our Lady of the Assumption was built on the old mosque of the Muslim period, between the17th and 18th centuries. It is a clear example of the Spanish Baroque. The works began in 1672 under the direction of Francisco Verde, succeeding Pedro Quintana and Ferran Fouquet.

Its three covers are the work of the sculptor Nicolás de Bussy between 1680-1682. During the civil war, it was partially destroyed, being restored years later by the architect from Elche Antonio Serrano Peral. The Communion Chapel was designed in 1782 by Lorenzo Chápuli. The tabernacle of the main altar was made in marble in the city of Naples and designed by Jaime Bort. 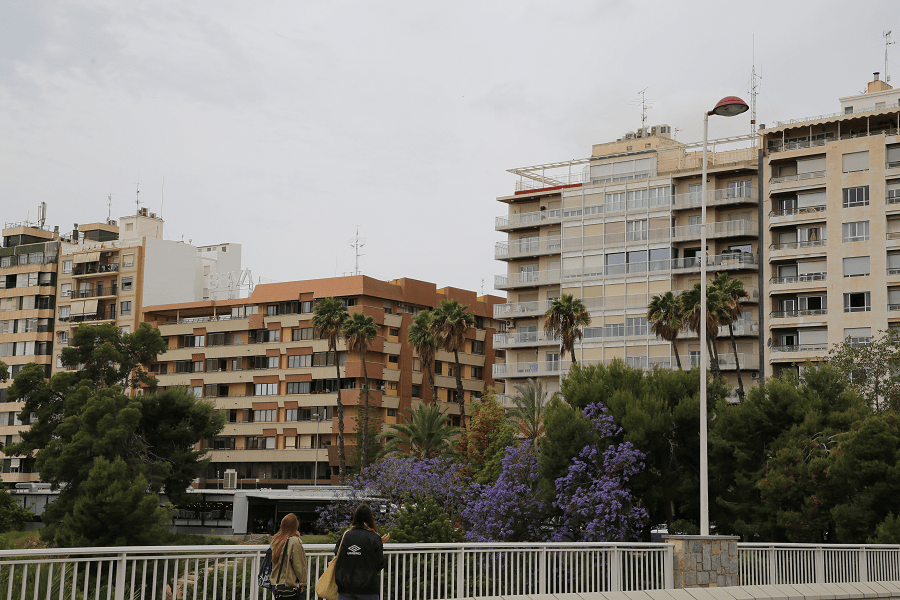 The sculptural composition of the three apostles, located at the main facade of the church, also represents a scene from the “Mystery of Elche”. When they meet, they express surprise and joy, after which they begin to sing Mary’s farewell songs. The composition was also designed by local sculptor Miguel Ruiz Guerrero. 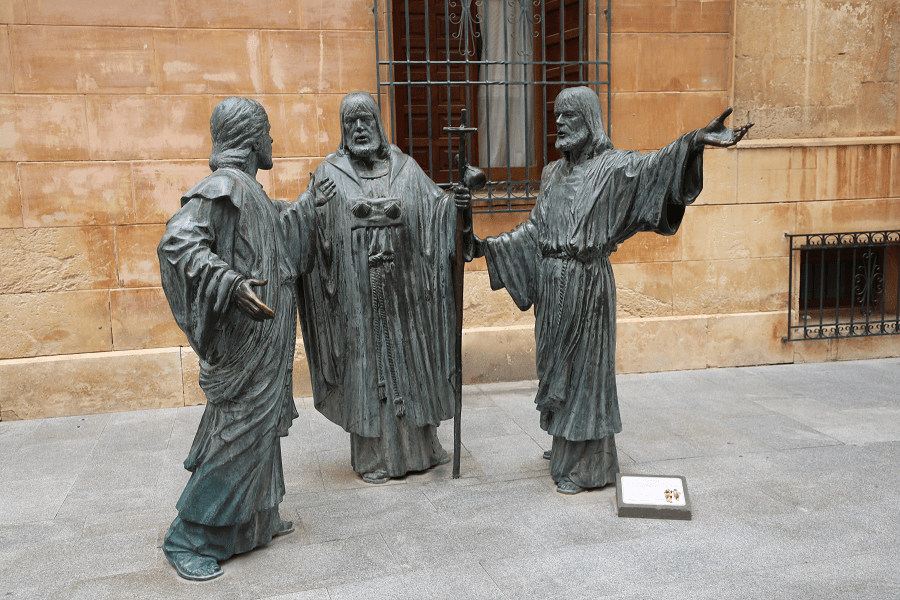 The Calahorra tower is a rectangular Almohad fortification, built between the end of the 12th century and the beginning of the 13th century. It was part of the wall that surrounded the medieval town and defended the entrance that communicated with Alicante. It has been the headquarters of the Government Sub-delegation. It currently houses temporary exhibitions.

The Torre del Consell is currently the seat of the Elche City Council. It is located in Plaça de Baix. Its construction dates from the 15th century. 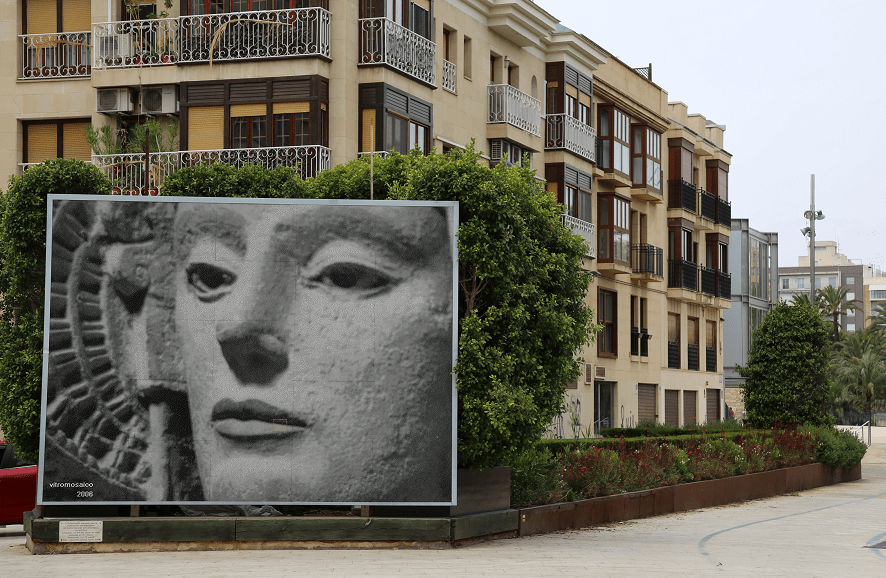 The Castle-Palace of Altamira or Alcázar de la Señora, was built at the end of the 15th century by the Castilian nobleman Gutierre de Cárdenas, the first lord of the city, after having returned to the Crown with the Catholic Monarchs, making it his habitual residence. It is likely that it was built on a place of an earlier castle from the 12th or 13th century, which would form part of the defenses of the Almohad walled town. It belonged to the Counts of Altamira.

The Torre del Gall is located on Avenida de Sant Andreu number 25 in the rural area of La Foia. It is a residential building in the Valencian Modernist style built in 1928. 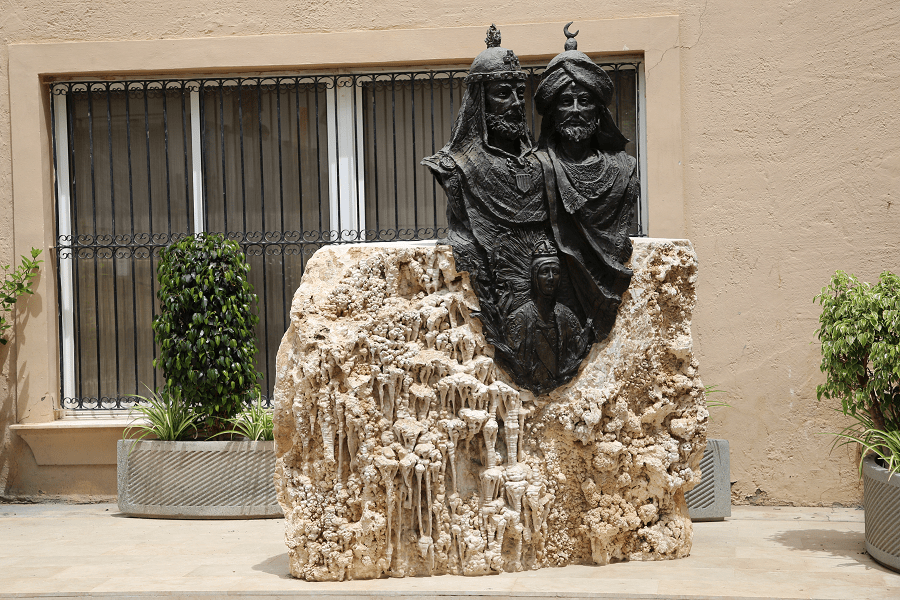 The Archaeological and History Museum of Elche “Alejandro Ramos Folqués” (MAHE) has become an archaeological reference of great importance at the regional level. Located inside the Altamira palace, in the historic center of Elche and very close to the Santa María basilica, it was inaugurated on May 18, 2006 with a large exhibition on Iberian culture.

As a permanent exhibition, the museum offers an overview of the different stages that have taken place in the city, such as the Neolithic, the Copper Age, the Bronze Age, the Iberian period, the Romanization process, the Visigothic period and the Islamic settlement (current location of the city) to the present day. 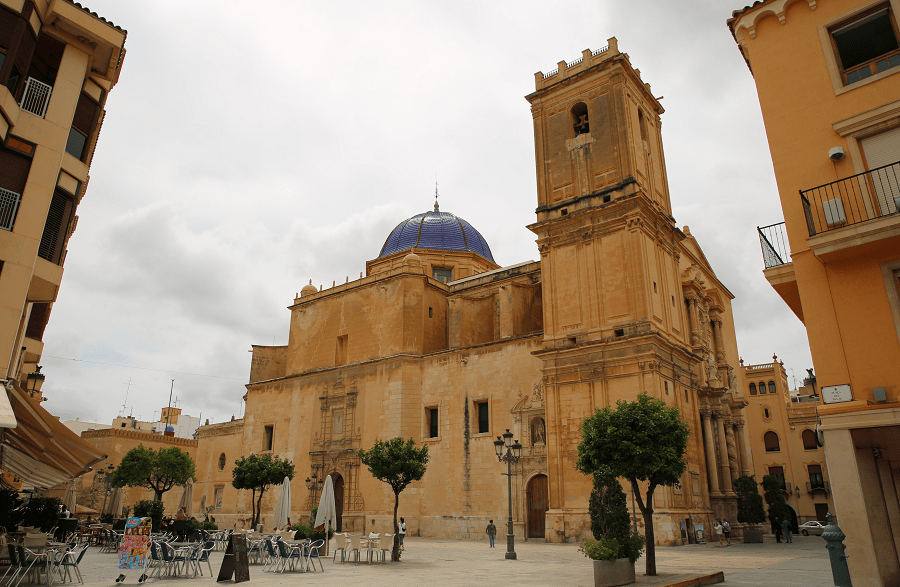 Archaeological remains have been found at La Alcudia, Elche Park (located in one of the city’s gardens and which has provided important sculptural remains) and El Arenero de Monforte del Cid.

The Museo de la Festa, about the Mystery of Elche, was born with the intention of showing La Festa to visitors who come to the city throughout the year. The museum is made up of two rooms: the first one where the scenic tradition that surrounds the Mystery is collected, such as posters, models, crowns, clothes, guitars …

But the real attraction of the museum is precisely the second hall, which occupies part of the Hermitage of San Sebastian, the last surviving example of Catalan Gothic of the fifteenth century. New technologies revive the history and emotions that surround this extraordinary space through a half-hour audiovisual animation directed by one of the Mystery characters, the Apostle Sant Jaume, accompanied by impressive special effects. 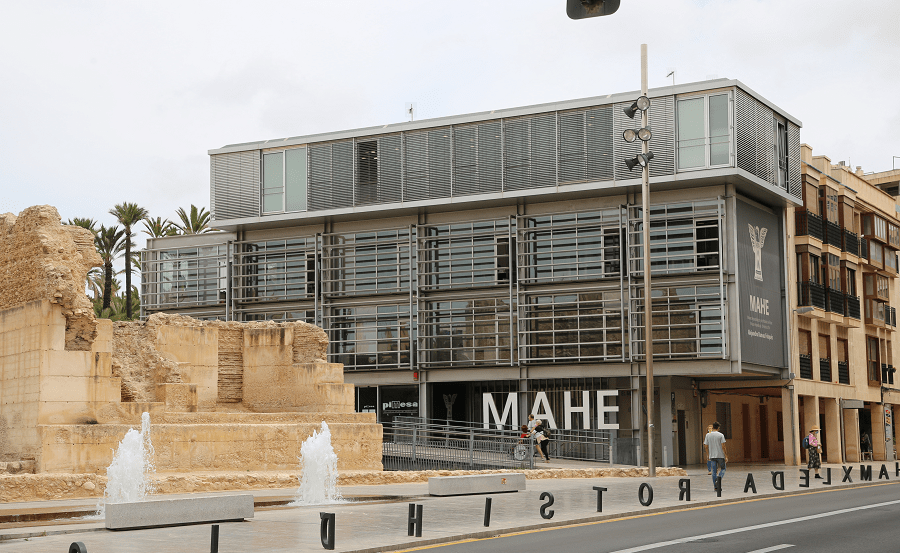 The Palm Grove Museum is located in a traditional house in the Huerto de San Plácido, near the Huerto del Cura. The museum is dedicated to learning about the municipality’s relationship with palm orchards. The museum shows the origins, history and culture of the palm groves and their evolution through video, as well as visits to the groves themselves.

Centre for traditional culture – school museum of Pusol. It is an innovative education project with two overall goals: to promote value-based education by integrating the local cultural and natural heritage within the curriculum, and to contribute to the preservation of Elche’s heritage by means of education and training.

Implemented at the one-teacher rural public school of Pusol (Elche, Spain) in 1968, the project has successfully integrated heritage into formal education.

Guided by teachers and external collaborators, children explore, in a play atmosphere, do fieldwork data collection and teach one another and visitors about heritage, studying and exploring the heritage by themselves.

The project is highly esteemed by the local rural community, the general population of Elche, and experts on education and culture for its pioneering democratic, integrative and participatory nature. 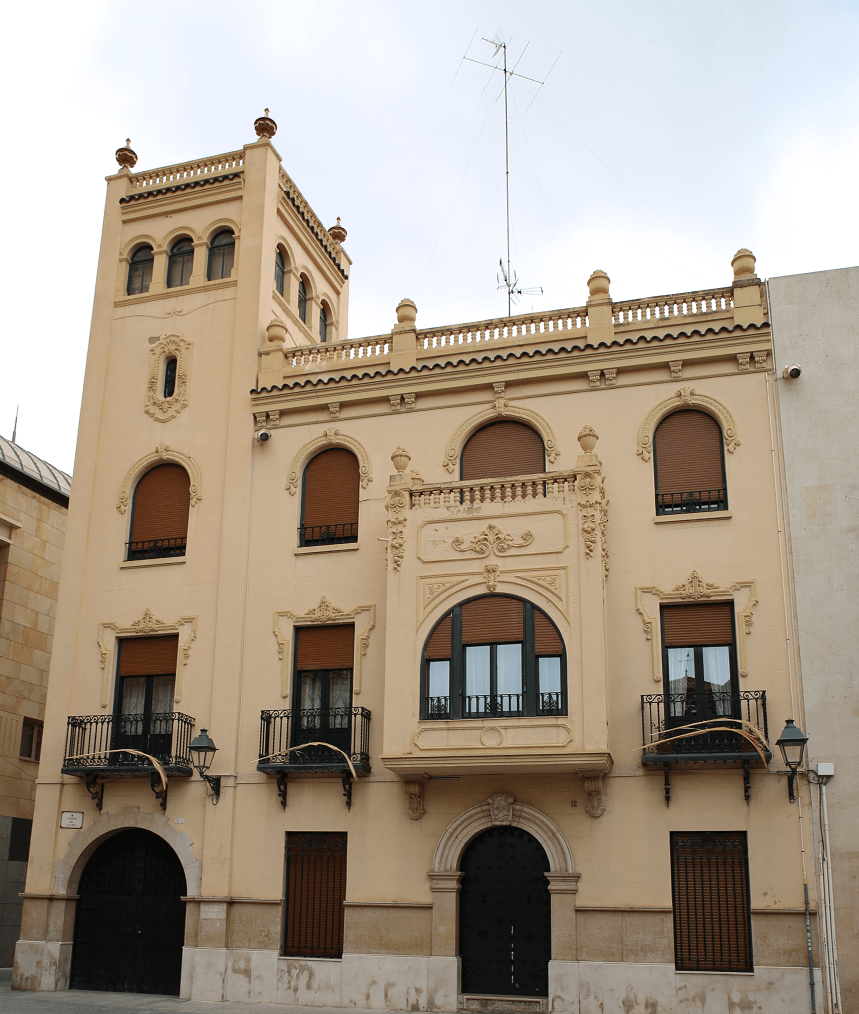 The paleontological museum of Elche presents a journey through the evolution of life on Earth, through the exhibition of findings from various sites. This museum recreates the study office of Pedro Ibarra Ruiz, an archaeologist, archivist and librarian from the early 20th century, a pioneer in archeology and paleontology in the city. The museum has a temporary exhibition hall as well as a mineral collection.

The archaeological museum – site of La Alcudia is located 3 km south of Elche, near the Vinalopó river. Its current extension is approximately 10 hectares where different excavation works have been carried out over the last centuries. 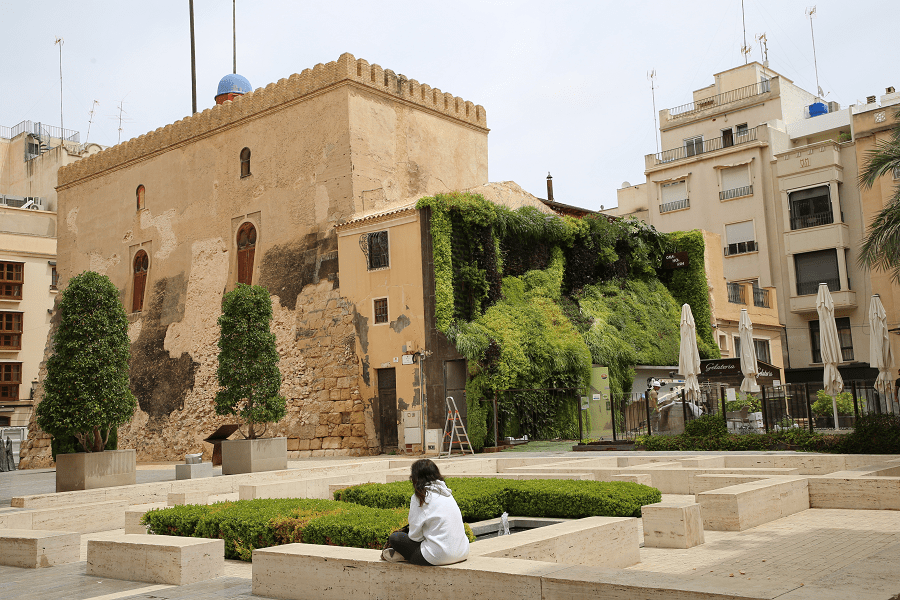 The Palmeral or Palm Grove of Elche is the generic name for a system of date palm orchards in the city of Elche. Elche palm groves are a man-made phenomenon. The first trees began to be planted here in the 5th century BC by Carthaginians. But the lush palm groves appeared during the reign of the Arabs, who by the end of the 10th century turned the area around the city into a veritable oasis of date palms. Having survived the periods of the reign of various conquerors of the Spanish lands, by the 18th century, the palm groves of Elche acquired colossal dimensions and in 1943 became a historical monument of Spain. 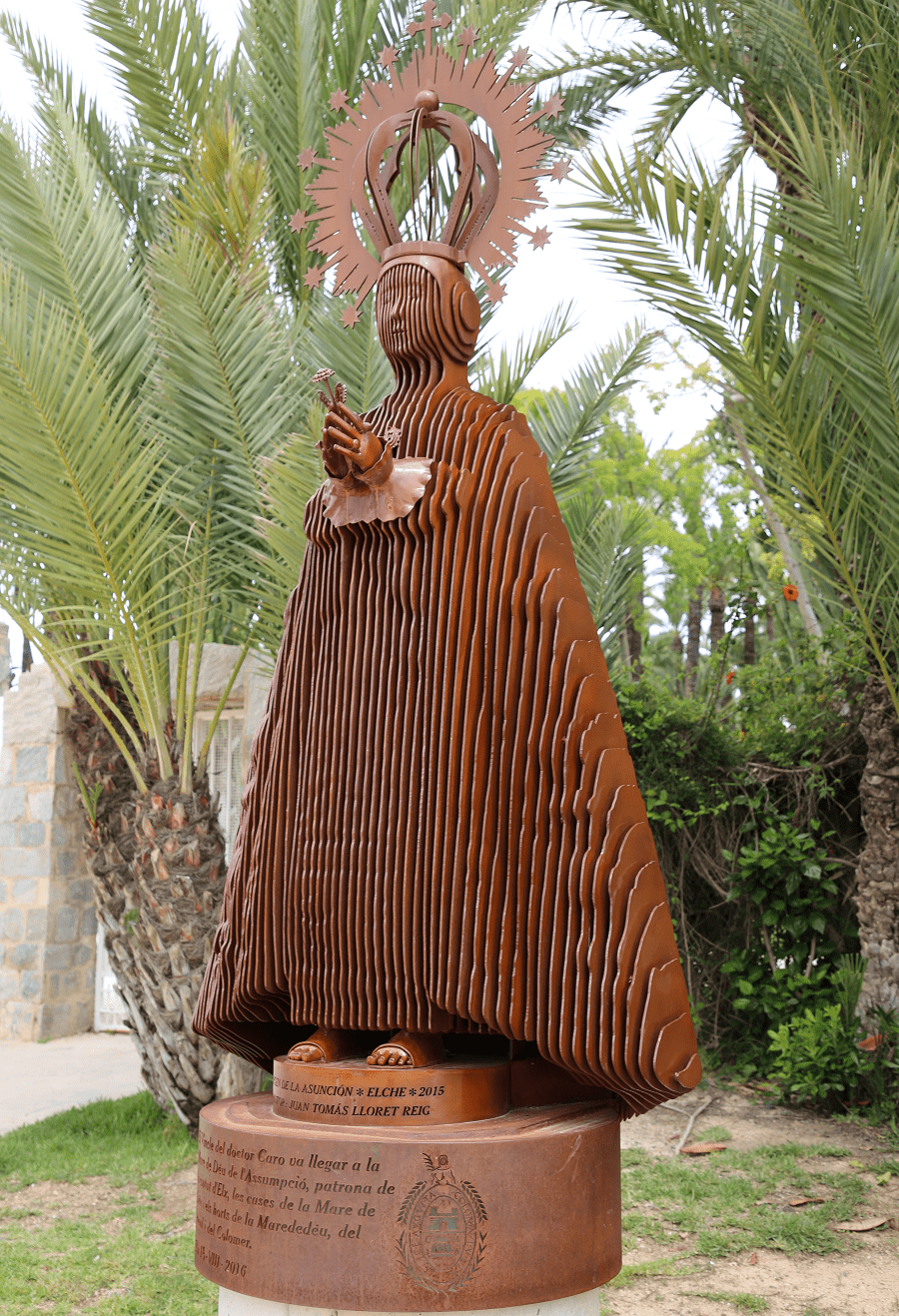 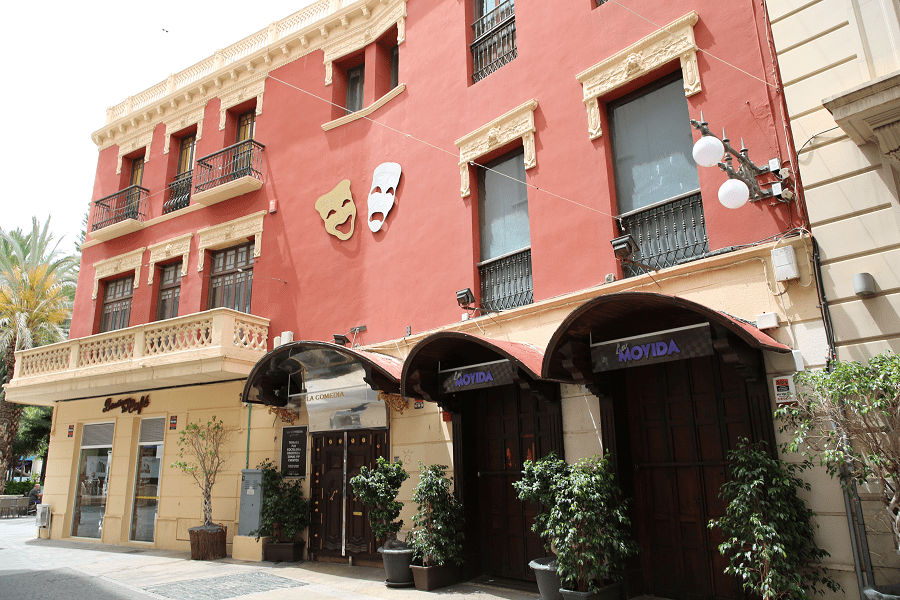 The Mystery of Elche

The Misterio de Elche ((Misteri d’Elx in Valencian)) is a liturgical drama from the Middle Ages that reenacts the Dormition and Assumption of the Blessed Virgin Mary.

The music for the play is contained in the Consueta, a portmanteau of the words Consuetudine and Ordinatio. These manuscripts of the liturgical ceremonies, which contain precious annotations on stage directions, musical score, and stage devices, date from as early as 1625.

Preparations
In the weeks leading to the staging of the Misteri, several preparatory events occur.

On August 6, in the Room of the Council, “la prova de veus” (“the test of voices”) takes place, to select those who will sing in the Misteri. This shows that Elche’s City Council, and not the Church, financially supports the play.

At 6 o’clock in the evening of August 10, “La prova de l’àngel” (“the test of the angel”) is conducted inside the basilica. This is when organizers identify children resistant to dizziness and are thus fit to descend and ascend on the aerial stage devices. 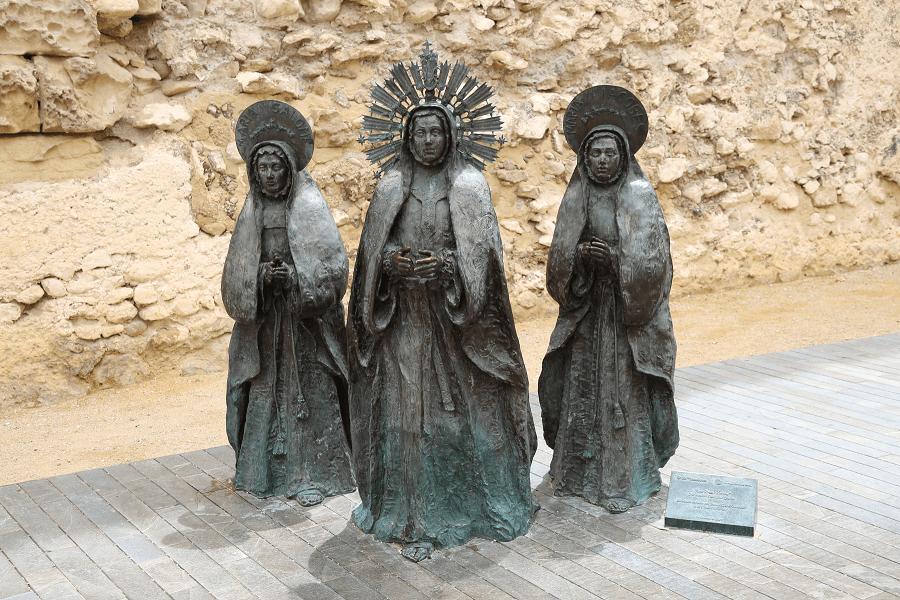 It is the only work of its kind that has been represented without interruption to date, even overcoming the impediment posed by the prohibition of performing theatrical works inside churches by the Council of Trent. It was Pope Urban VIII who, in 1632, granted the people of Elche, through a papal rescript, permission to continue with said representation, against the attempted prohibition of the bishop of Orihuela.

The text of the Mystery, with the exception of some verses in Latin, is written in old Valencian. 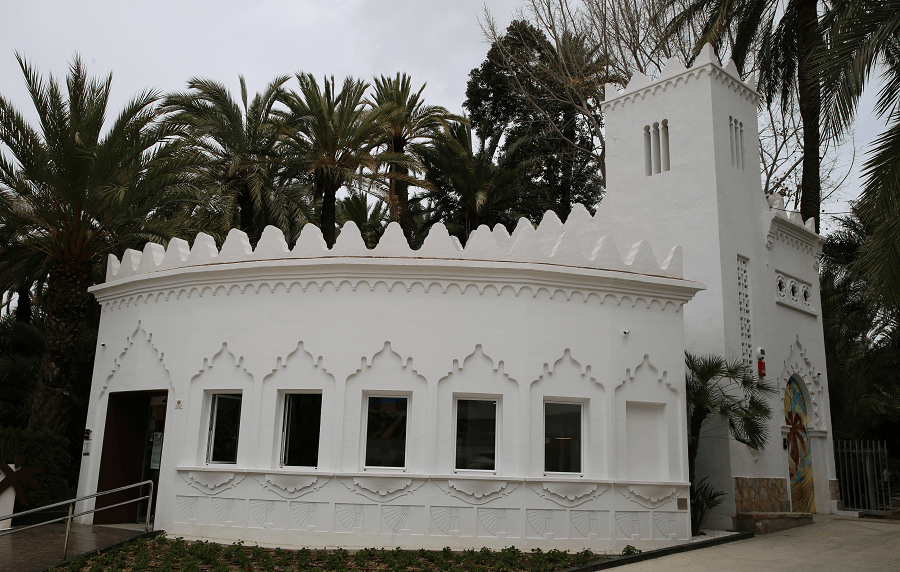 Elche is renowned for its wide range of footwear, textiles, fashion accessories, cosmetics and furniture. Elche Business Park, 7 km from the city center, near the town of Torrellano, offers organized visits to the Ruta Outlet.

More than a hundred shops are located in the Centro Comercial Abierto shopping centre. 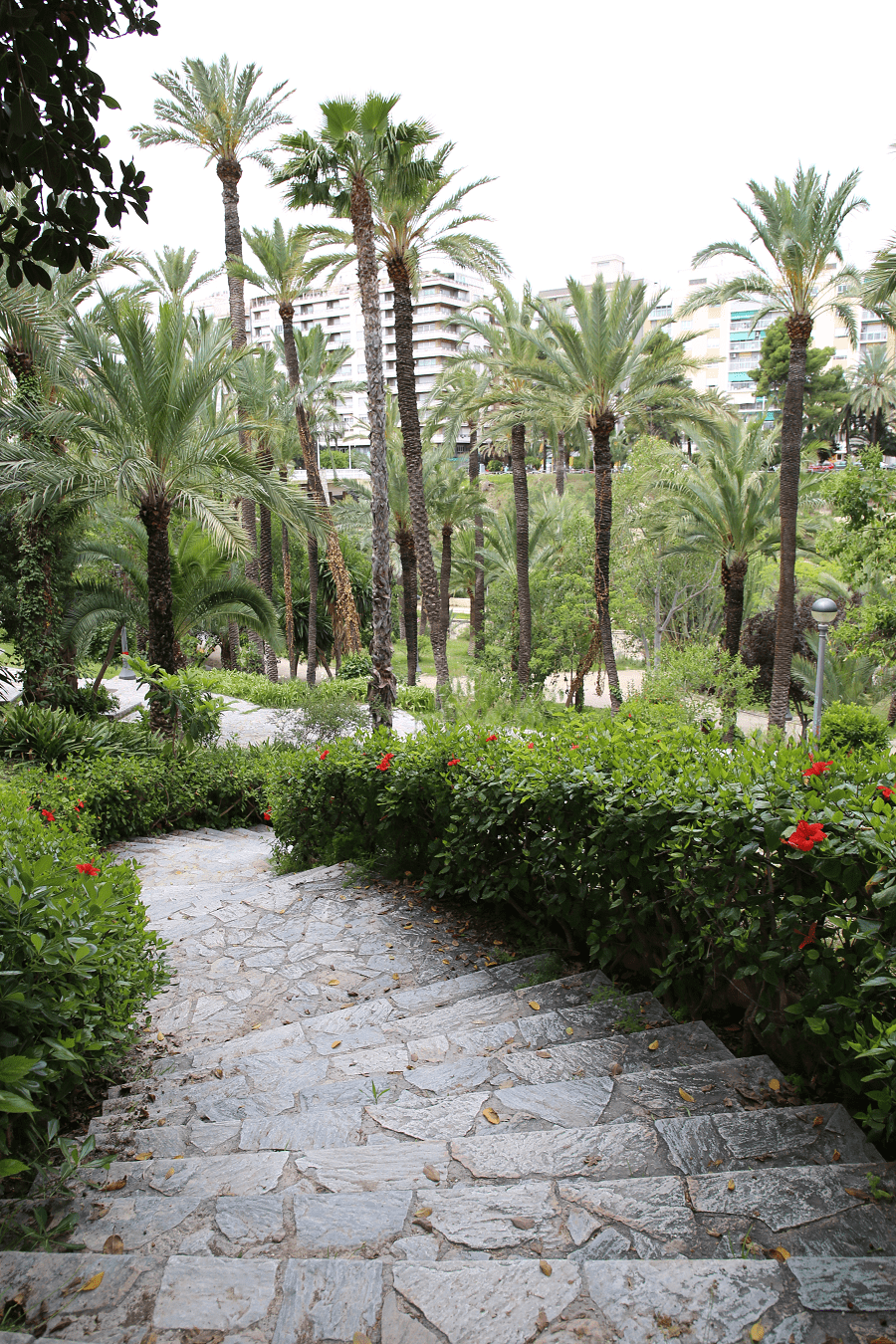 There are four Michelin list restaurants in the city: 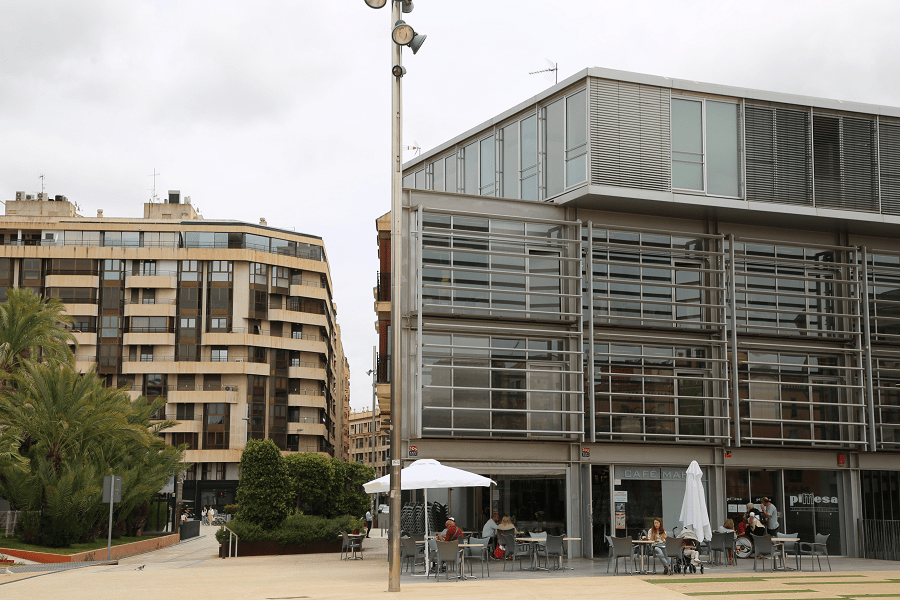 The Alicante–Elche Airport, the fifth-busiest in Spain is located in the municipality of Elche, around 10 kilometres  east from the city centre. The “autopista” AP-7 serves the outskirts of the city, and the railway linking Alicante and Murcia del Carmen runs through a tunnel underneath the city. There are two metro stations in the city – Elche-Parque and Elche-Carrús. These are served by line C1 of the Cercanías Murcia/Alicante commuter rail service, along with Media Distancia trains between Valencia Nord station and Murcia.

The Madrid–Levante high-speed rail network is being extended to reach a new station named Elche-Matola, branching off from the line to Alicante near Monforte del Cid. The new AVE station will contain parking space for 500 cars and 50 motorcycles. 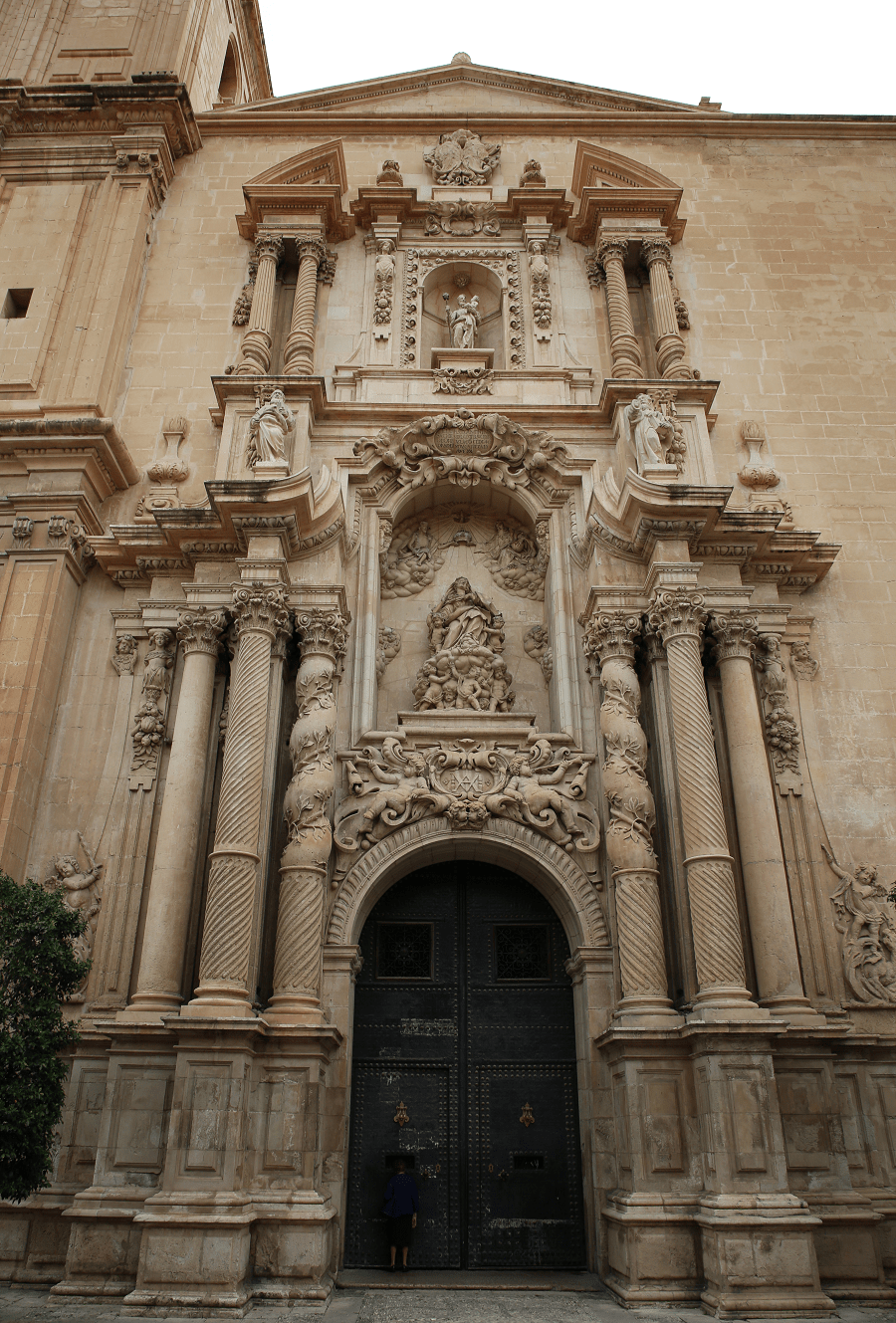