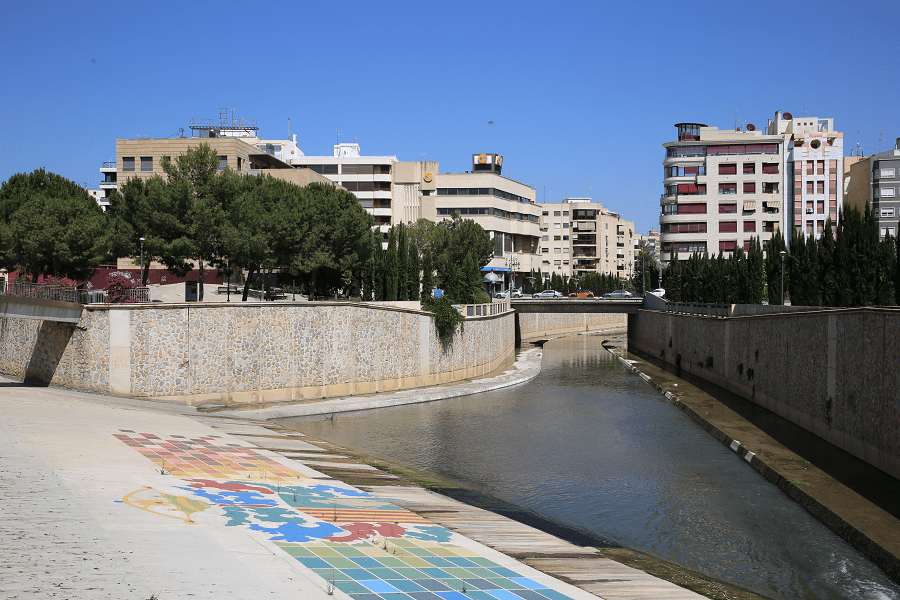 Orihuela (Sp. Orihuela) is a city and municipality located at the feet of the Sierra de Orihuela mountains in the province of Alicante, Community of Valencia, Spain.

The historic center of the city was declared a Monumental Artistic Historic Site (BIC) in 1969, being one of the first to be declared in Spain. It preserves a multitude of monuments, many of them declared as Asset of Cultural Interest (B.I.C.), as well as a multitude of ecclesiastical and civil buildings. Among those that are interspersed: churches, monasteries, convents, hermitages or palaces, palaces and bourgeois houses of various centuries.

Orihuela castle located on the top of Mount San Miguel. It was probably built in the time of the Visigothic king Theodoric, although other sources indicate that it is of Arab origin. Despite having been declared as Historic Ruins and Glorious Ruins in 1931 and being protected by the Special Plan for the Protection of the Historic Center of Orihuela, its degradation is continuous.

Puerta de la Olma or Elche. The only gateway to the city that remains standing after the collapse of the walls by Felipe V. It is of Almohad origin, although King Felipe II ordered to reform it in the 16th century. In the upper part is stamped by the shield of the city and on it a high relief with the image of San Miguel, protector of the city.

City wall (B.I.C). Located in the basement of the Miguel Hernández University Lecture Hall is part of the wall formed by a canvas in which four towers of Almohad origin are integrated, modified in the 14th century, next to it you can visit, Arab baths, Islamic houses and remains of Gothic and Baroque buildings, as well as remains of the Palace of King Fernando I of Antequera, and archaeological remains of the furniture of the Almohad houses that are found there. The Museum of the Wall, which contains it, was declared B.I.C.

Other areas with towers or remains of the Walls are:

Orihuela Cathedral. Gothic temple from the 13th to the 15th centuries with three naves and an ambulatory, its transept transformed by Pere Compte at the beginning of the 16th. Interesting Gothic and Renaissance ironwork, a choir from the 18th century made by Juan Bautista Borja. The organ, a work from the 18th century by Salanova, stands out, one of the best in all of the Spanish Levant.

Orihuela Episcopal Palace. Baroque palace from the 18th century. A small baroque cloister and the stairwell stand out, topped by a dome and the doorway of the Curia, where the coat of arms of one of the last Cartagenean bishops can still be seen. It was the palace where the bishop of Orihuela resided until his transfer to Alicante. The monument was declared an Asset of Cultural Interest of the Spanish historical heritage. It currently houses the Diocesan Museum of Sacred Art where there are works of religious themes, among which Velázquez’s The Temptation of Santo Tomás de Aquino stands out.

Convent of Santo Domingo. Monumental building of more than 18,000 square meters where various styles occur, including Gothic, Renaissance, Baroque and Rococo. It is the largest National Monument in the Valencian Community. Composed of two cloisters, three patios, a reflector, three monumental portals and the Church. It was founded by Cardinal Loazes (Patriarch of Antioquia) under the name of Colegio del Patriarca. Its construction began in the 16th century ending in the 18th century. It preserves works by Antonio de Villanueva, Pedro Camacho Felizes, Bartolomé Albert, Nicolás Borrás, etc. It was declared a Monument of Fine Arts by Queen Isabel II, switched to a National Monument, and is currently considered an Asset of Cultural Interest of the Spanish Heritage. In this College the first National Public Library of Spain (16th century) was founded, current State Public Library.

Church of the Saints Justa and Rufina. Gothic church with a single nave, with chapels between buttresses, a Renaissance side portal and a Baroque main portal, including the altarpiece in the Chapel of Communion and the neoclassical organ from the 18th century. The building was declared a Site of Cultural Interest. The Sacristy is the work of Jaime Bort.

Church of Santiago Apóstol. Gothic church with a single nave, with chapels between buttresses, an Elizabethan Gothic façade and a Renaissance presbytery. Chapel of the Communion in baroque style. The Baroque organ, the sculptural group of “La Sagrada Familia”, the work of Francisco Salzillo, as well as the Dominican Saints by the same author and the Apostolate of José Puchol stand out. It was declared B.I.C.

Sanctuary of Our Lady of Monserrate. Baroque style temple built in the 17th century originally with medieval remains in the Gothic style. The image of the patron saint of the city, the work of José Sánchez Lozano, is preserved in it. The extension of the 18th century was carried out by the Bishop of Orihuela. Highlights include the altarpiece in the Capilla Mayor, a brilliant work by the Valencian sculptor José Puchol, and the altarpiece in the Capilla del Hallazgo, the work of Antonio Caro el Viejo, polychrome by Bartolomé Albert and gilded by Heredia. In addition, it contains works by Antonio Villanueva, Galarza, Antonio Ruidavest, etc. Neo-Gothic organ from the 19th century. Important collection of textiles from the 18th, 19th and 20th centuries. Declared an Asset of Cultural Interest of the Spanish historical heritage.

Palace of the Count of Pinohermoso. Completely renovated 16th century building. The main and southern side facades stand out. Inside you will find the Fernando de Loazes Public Library, the Orihuela Historical Archive and the Orihuela Municipal Archive, the latter two being declared BIC. It also contains an interesting collection of paintings consisting basically of portraits, of various sizes, from the 17th and 18th centuries.

Palace of the Marquis of Rubalcava. 20th century building with an important ceramic collection with pieces from the 18th, 19th and 20th centuries. Also highlights the pictorial collection with works from the XVII, XVIII and XIX centuries, as well as works from the School of Lorraine. The furniture of the palace and the tapestries that are contained in it also stand out. It is currently used as one of the two tourist offices located in Orihuela City.

Palace of the Count of Granja de Rocamora. Baroque palace, with a clear hierarchy of holes and an interesting portal. It preserves on its main floor collections of furniture, painting, clocks, among which stand out works attributed to Bassano, and works by Vicente López, Madrazo, Sánchez Lozano, etc. The design of the Main Cover is attributed to Jaime Bort.

Palace of the Counts of Luna (Palace of Teodomiro or of the Dukes of Béjar). 18th century building, made in the Baroque style. It follows the typical typology of the Orihuela baroque palaces. The dome decorated with frescoes and the 18th century Baroque tilework stand out.

Palace of the Baron de la Linde. 18th century building made in the Baroque style, one of the many noble families of Orihuela, the headquarters of the old-fashioned Carlism, one of more than a hundred manor houses preserved in Orihuela, belonged to the Marquis of Rubalcava.

Palace of the Marquis of Arneva. Baroque palace, with a clear hierarchy of holes, on one of its sides it preserves the coat of arms of the old granary. Likewise, the noble coat of arms on the corner of the Palace of the house of the Marqués de Arneva stands out. It preserves interesting pictorial works, among which are those by authors such as Joaquín Agrasot or Eduardo Vicente, as well as the Enseña del Oriol from the 15th century and the book on the privileges of Orihuela. It is currently the main headquarters of the City Council and the mayor’s office.

Palace of the Marquis of Rafal. Building of architectural interest made in the 19th century and expanded in the 20th. It contains interesting pictorial works, as well as sculptural works by various authors, among which José María Sánchez Lozano stands out. It contains an important file with notarial protocols from the 17th century. It is located in front of the Palace of the Count of Pinohermoso, headquarters of the Fernando Loazes Public Library since 1992.

Casinello House. Modernist building from the 19th century, located near the Fernando de Loazes National Library. At present it is occupied by the Youth Council.

New Square. Modernist style square designed by the architect Severino Ballesta in the 1920s, with benches, a fountain and lampposts decorated with tiles. It was restored in 1985.

Orihuela fish market. Building with a metallic structure from the beginning of the 20th century. Designed by Severino Ballesta within the framework of the modernist reforms carried out in the 20s and 30s in the city following the principles of iron architecture. At present it has been rehabilitated to locate in it, the Auditorium “la Lonja”, annexed to the Professional Conservatory “Barítono Pedro Terol”.

The city also has various museums with a sacred theme such as the Diocesan Museum of Orihuela (with works by Velázquez, Vicente López, Camacho Felices, Nicolás de Bussy, Pedro Orrente and Mathias Stommer), the Museo Catedralicio de Arte Sacro, or the Museo of Holy Week.

There is a museum dedicated to science, the Orihuela Didactic and Interactive Science Museum (MUDIC).

There are also museums of an ethnological nature such as the Museum of the Reconquest Festivities or the Ethnological Museum of Orihuela. It also has other cultural establishments such as the Miguel Hernández House-Museum or the Pedrera Foundation Museum dedicated to classical art or the future San Juan de Dios Hospital Museum that will be dedicated to the old Orihuela Hospital.

Its main traditional dishes are the stew with balls, the turkey stew, the pepitoria chicken, the huertana paella, the stewed beans, the paisana tortilla, the chopped wheat, the crumbs with chocolate, melon and grape. The sausages also take on great prominence.

Main international airports are in Alicante and Murcia.