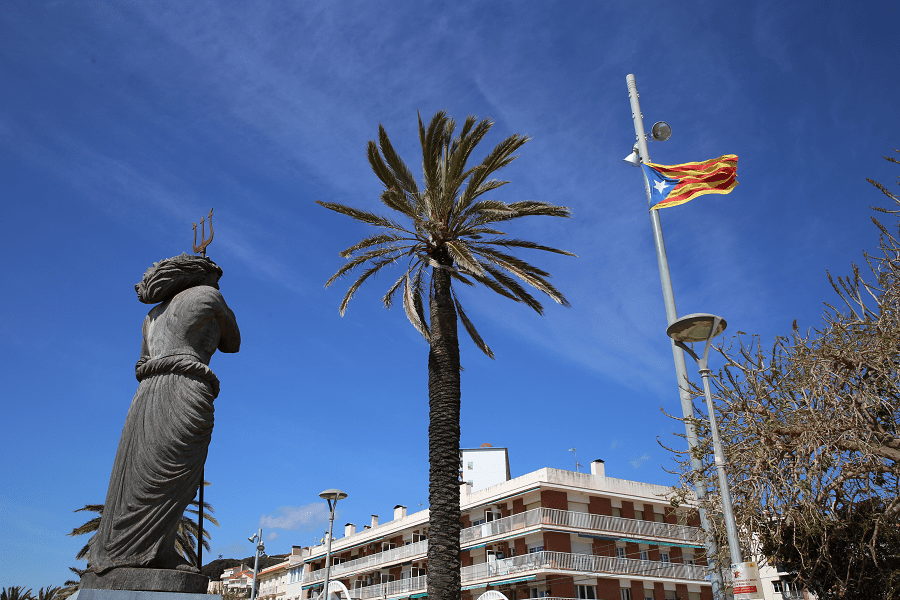 It’s a popular part of the Costa del Maresme of the Mediterranean resorts of Spain.

With its excellent textile, nautical and tourist traditions, it is also an important cultural center with its churches of Sant Pere (16th century), Our Lady of Charity (neo-Gothic style) and the modernist houses of Lluís Domènech i Montaner.

In recent years, the population has increased significantly, especially with residents from Barcelona and the surrounding area, who find Canet de Mar an ideal place to live outside the big city, but close enough to work. Other important economic activities in the city are the textile industry, floriculture and strawberry cultivation, which, however, have experienced a sharp decline in recent years.

Its name Canet (from the Latin cannetum) means “place of reeds”.

The city is rich in its architectural heritage – the modernist buildings of the famous architects of Catalonia Josep Puig i Cadafalch, Lluís Planas i Calvet, Pere Domènech i Roura, Lluís Domènech i Montaner and others. Buildings from this period include Casa Roura by Domènech i Montaner, Ateneu Canetenc, Santa Florentina Castle and some of the pantheons in the cemetery.

Santa Florentina Castle is also one of the selected locations for the sixth season of Game of Thrones.

House-Museum of Lluís Domènech i Montaner

Casa Museu is a space dedicated to the study of the work of the architect Lluís Domènech i Montaner. It consists of the Domènech house, designed by the architect in collaboration with his son Pere Domènech and his son-in-law Francesco Guardia, and the 16th century Can Rocosa farmhouse, owned by the Maria Ruhr family. Lluís Domènech turned it into his studio.

The museum is part of the Diputació de Barcelona network of local museums and was opened in 1998. In September 2011, after a period of reforms, it launched a new “museographic model” that takes into account new audiovisual technologies.

Despite the fact that Lluís Domènech was a native of Barcelona, ​​his life was closely connected with Canet de Mar thanks to his mother Maria Montaner, so the architect spent a long time in Canet, especially in summer. In his office in Can Rocosa, he designed buildings such as the café-restaurant and the international hotel of the 1888 World’s Fair, the Palace of Catalan Music, and the Hospital of Santa Creu and Sant Pau. In addition, in Canet de Mar, he built several buildings in addition to his residence, such as Ateneu or Casa Roura, and carried out the reconstruction of the castle of Santa Florentina.

Lluís Domènech initially worked as a representative of historicism in architecture, then devoted his work to modernity, becoming one of the largest representatives of this trend in European architecture. He was also fond of archeology and early medieval church architecture in Catalonia.

Temple of Our Lady of Mercy

The sanctuary is located on a wide esplanade in the shade of pine trees overlooking the city of Canet de Mar. The temple has been documented since 1520. Then from Trieste (Italy) an image of Mary was brought for a new church built in the city in 1591. Later, between 1853 and 1857, the current neo-Gothic sanctuary was built by the architect Francesc Daniel Molina.

The main façade is adorned with a magnificent Gothic arch framing the entrance, topped by a large rose window. In the same Parc de la Misericòrdia, next to the sanctuary, there is a building of the same name, designed by the architect Josep Puig i Cadafalch in 1914. This building is another example of Canet de Mar’s rich modernist architectural heritage.

It was consecrated on March 6, 1591, and a hundred years later the chapel of the Holy Communion, the bell tower and the transept were added. This three-story bell tower, built in 1703, is known for its height and uniqueness as the Poubilla de la Costa (clock from 1880).

Canet beach (cat. Platja de Canet) is located between the Cavaió beach and the municipal area of Sant Pol de Mar. Its length is 1500 m, it is a city free beach. It has several restaurants right on the waterfront and has been awarded the European Union Blue Flag in recent years.

Cavaió beach is located between Canet Beach and the municipality of Arenis de Mar. Its length is 600 m, it is a suburban beach. The composition is sandy, with granite rocks extending into the mouths of streams and rials.

There are no Michelin-rated restaurants in the city.

Canet de Mar offers a wide range of goods at affordable prices. The shopping center is located in the old town, in two main directions: Riera Buscarons and Riera Gavarra. There are other newer shopping areas such as Plaça Onze de Setembre and Can Salat Busquets.

The key location is the city market at the top of the Riera Buscarons. The market, built in 1932, mainly sells fresh produce, and there is also a weekly street market (held on Wednesdays) where you can buy clothes, shoes, cooking utensils, spices, etc.

The city’s train station belongs to the direct line Barcelona-Mataro-Maçanet Massanes (R1) Rodalies. The journey from Barcelona takes about 40 minutes.

By car, on the C-32 motorway from Mongat to Palafols, and on the N II road to the coast, from Barcelona to La Honquera.