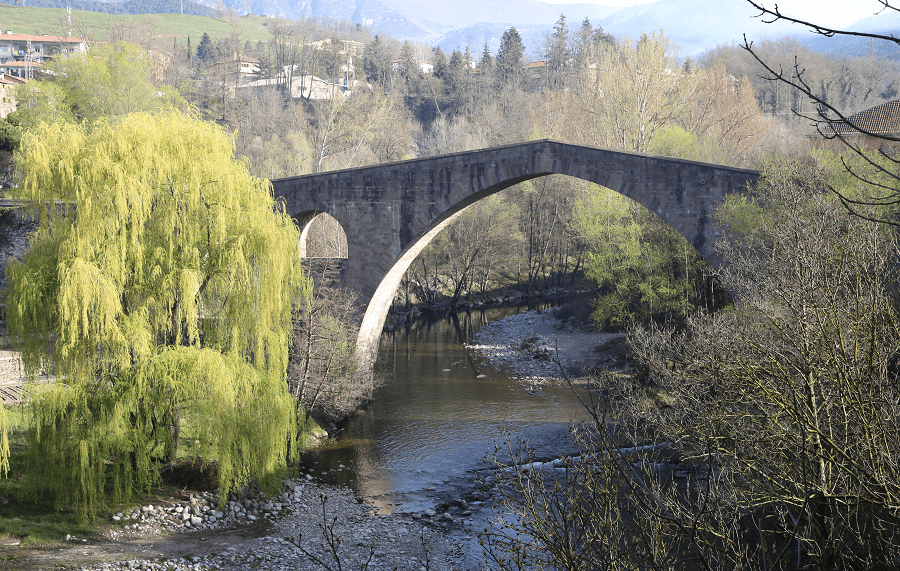 Sant Joan de les Abadesses is a city and municipality in Spain, Catalonia, located in the southeast of the Ripolles region. It is located in the pre-Yrenean valley on the Ter River. The city has an important medieval heritage associated with the monastery of Sant Joan de l’Abadeses, from which it originated and got its name.

The settlement in the San Joan Valley dates back to prehistoric times, where archaeological finds testify human life during the Lower Paleolithic period (about 200,000 years ago). Very little is known about later times, the romanization of the region was inactive, although the existence of a branch of the Via Augusta leading up the valley to the Col d’Ares is known.

The old town is divided into two cores of the Paseo del Comte Guifre: east with the center of Plaza Mayor and west with the monastery. The city’s architectural heritage is diverse, with medieval estates, modernist and industrial buildings such as Colonia Espona or Molí Petit.

The Monastery of Sant Joan (cat. Monestir de Sant Joan de les Abadesses), formerly called Sant Joan de Ripoll, was founded in 887. Until 945 it was the only nuns convent in Catalonia. It is a monument declared a cultural heritage of national interest.

The canons, under the protection of the bishop of Vic and the Augustinian rule, were able to finally settle in the monastery in 1114 and remained there until 1484. From that date until 1581, the monastery was ruled by bishops and cardinals. In 1592, Pope Clement VIII, suppressing the regular Augustinian canons of Catalonia and Roussillon, built a secular collegiate church, banned by the Concordat of 1856.

The Church of Sant Pol (cat. Església de Sant Pol), dedicated to Saints John and Paul, was built in the 12th century as a parish in Raval, the first city formed around a monastery and expanded during the Baroque period.

The old bridge (cat. Pont Vell) of the city is made in the Gothic style and has the shape of a lowered donkey’s back (symmetrical on both sides). It was originally built in the 12th century by order of Abbot Berenguer Arnau. Destroyed during the 1939 Republican retreat. The reconstruction, which was completed only in 1976, was supervised by the architect Pons Sorolla.

The abbey’s palace (cat. Palau de l’Abadia) is a historical monument and cultural site of national importance, which was formerly part of the living quarters of the monastery. It was built in the fourteenth century and expanded by Abbot Arnau de Vilalba in the fifteenth century. Currently, the city tourist office is located here.

Remains of a medieval wall (cat. Muralla medieval): to date, fragments of city fortifications, two towers, a section of a defensive wall and several darts have been preserved.

Sant Joan de les Abadesses is part of the Coal and Iron Tourist Route (Ruta del Ferro i del Carbó), a 12 km hiking trail from Ripoll to San Joan, with an average incline of 1%, with a low degree of difficulty.

Anselm Clavé square (plaça Anselm Clavé) includes mainly the buildings of Geroni Martorell, dating back to the beginning of the 20th century. The decorative fountain is the work of Josep Camps and is crowned with a statue that probably represents the Count of Arnau.

Monument to Sardana – the work of the sculptor of San Juan Francesca Fayul, located in the Church of San Pol.

The Festa Major is celebrated on the second Sunday in September with traditional events such as the Ball dels Pabordes.

The Count Arnau Cultural Cycle takes place every August and you can enjoy theater, dance and traditional music performances.

The San Isidre Fair is held on the weekend coming to May 1 and 15, on the Day of Saint Isidore, the patron saint of farmers. Other events include a cattle fair and a craft market.

Clownia is a music festival organized by the Txarango group in Sant Joan since 2014 and takes place in late June – early July. In addition to concerts, public information events on social justice, solidarity and sustainability are held here.

Since 2005, the city has been celebrating Festa del Grito, a day to commemorate the independence of Mexico. It is held on the Saturday closest to September 16 (Grito de Dolores day) and includes various events, a Mexican handicraft and food fair, conferences, exhibitions, workshops for children, musical performances and traditional dances.

Shopping is not the first part on the tourist program.

There are no Michelin-starred restaurants in the city.