The Pyrenees Font-Romeu is the oldest ski resort in France, which today is visited by almost 1 million tourists a year, said the mayor of the city, Jean-Louis Demlen • All PYRENEES · France, Spain, Andorra 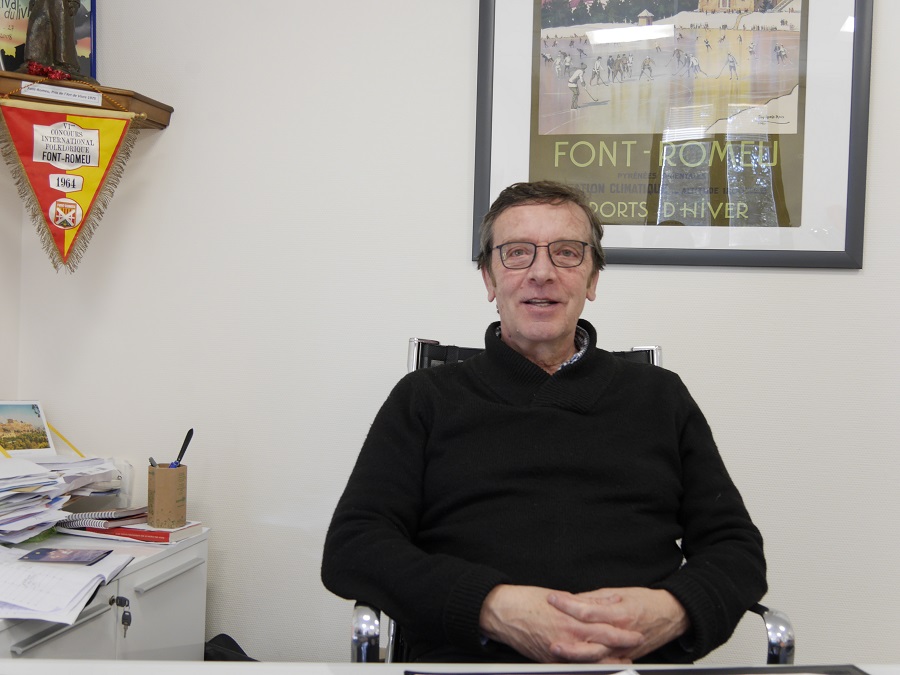 Font-Romeu is known as “the land of champions”, “the heart of the Catalan Pyrenees“, being a city with panoramic views, clean air, and bright light. The city has about 6,500 inhabitants, with about 2,050 of those being permanent residents. The city is located in the Languedoc-Roussillon region of the Eastern Pyrenees (Pyrénées-Orientales) on the Cerdagne plateau, 40 km from Andorra.

Font-Romeu is well-known for its high reputation in the world of sports and tourism since it was here in the early 20s and was one of the first ski resorts in France.

In addition, in Font-Romeu there is the leading French National Center for the Training of Athletes – CNEA (Centre national d’entraînement en altitude).

The city itself is located at an altitude of 1800 m above sea level.

The mayor of the city of Font-Romeu, Jean-Louis Demelin, told all-andorra.com about plans to improve the infrastructure of the ski resort in order to attract more tourists and professional athletes for family holidays and to train there.

In 1920-1930, Font-Romeu was called the “Winter Sports Palace”, where the world elite loved to come, as it was here that one of the first and most prestigious ski resorts in France appeared. What is the city like today?

It is still a ski resort that is high in the mountains, small and compact in comparison to Andorra.

The resort also has three separate slopes for slalom skiers and a stadium for biathlon.

The resort also provides the opportunity to go night skiing – both for amateurs and for competitors with the participation of, as a rule, the Northern European countries.

As for the architectural style of the city, in recent years there has been a tendency for wooden chalets to be built in the town, including many log houses brought in from Finland and Canada, as well as an aged tree.

What is the city’s investment budget for 2018? How has it changed compared to last year?

The total budget of the city is 23 million euros. This budget is approximately the same and has not changed for several years.

What are the main investment projects the city has?

The City Hall is the owner of the ski resort. Recently, we have invested 35 million euros in the ski area. Over the past few years, we have built a new wellness center, a new school, a police station, and renovated the City Hall. Now we are building a new five-level building which will be used as a car park in the city center.

Are there any plans to improve the infrastructure of the ski resort?

The main issue is that now there is no connection between the city and the ski station. You need a cable car to be able to access the chairlifts. Now you can get to the ski area only by car. We want to build a cable car and are actively working on it. But in France, the process of gaining planning permission is very difficult and long, as it requires a huge number of permits related to environmental protection.

This is a very expensive project, which, including the construction of a spa centre, totals about 25 million euros. In Font-Romeu there are a lot of springs with hot hydrogen sulphide water. We also need to build more 4-5 star hotels.

We are interested in attracting foreign investors and will be happy to discuss the details of this large-scale project.

How is the real estate market now? Are there any large plots of land for sale? How much does the land cost?

Yes, we have land for sale. Each square meter of land without road access or infrastructure costs about 50 euros. When those factors are included, the price increases to a starting price of 200 euros per square meter.

What are the annual costs of heat and electricity?

The amount depends on the size of ​​the real estate, the type of energy it uses and the amount of heat consumption: using traditional energy sources, the costs range from 500 euros to 2,000 euros per year.

In Font-Romeu, are alternative energy sources widely used like solar panels for example?

Yes, many homes are equipped with solar panels precisely because in general, the Eastern Pyrenees is one of the sunniest regions in Europe, which makes it economically feasible to use this type of energy.

In addition, near the city, there is a so-called solar furnace above 50 metres tall, which is used for research and scientific purposes. It is the largest in the world and is known for being capable of producing temperatures up to 4000 degrees Celsius.

By looking at the number of ski passes that were sold, we can see, as I said, during last year’s 2016-2017 season almost 700 thousand tourists visited. In general, in winter and summer, the city recorded up to 1 million people who spent at least one night here.

What’s on the agenda in terms of cultural and sporting events for this year? What does the city offer tourists?

In summer, we regularly host street music festivals, a jazz festival, and a book festival.

From 19 to 23 December last year, we organized the Freestyle World Cup (skiing) – an event with a budget of 300 thousand euros. This weekend there are various competitions called “Trail in the snow” covering 5, 12, 25 and 40 km, as well as a night race.

From 18 January until 26 January, the European Snowboard Cup will take place, and from the 5 – 7 March, the Ladies Night Tour will be held. This is a competition for French female sports elites who will compete in parallel slalom disciplines – both during the day and at night. Around 40 female athletes are expected to participate.

On 17 March, there will be an obstacle race. On 17-18 March, the championship of Northern France (juniors) and finally, on 22 – 23 March, we will hold the Snow Festival, including games, outdoor activities and sports events that are designed for 700-1000 children.

The slopes will be closed on 2 April.

There is also a casino with a roulette table and many slot machines, restaurants, a cinema, and a disco for entertainment.

Are there any joint projects happening in the field of tourism with Andorra, which is visited annually by about 8 million tourists?

Unfortunately, there are no such projects yet. The only example of interaction we have with Andorra is in the field of education. Our university STAPS is a scientific and technical university of physical activity in sport (Sciences de Technique, des Activités Phtisiques et Sportives), which is very popular among the inhabitants of Andorra due to its territorial proximity.

In total, there are 21 universities in France which specialise in the professional training of athletes. The University of Font-Romeu is the most famous and unique because it offers these courses at high altitudes.

The purpose of STAPS is to develop the science of sports and sports culture, help students to determine their “training routes” depending on their skills and requests, as well as provide a high level of professional training. The university offers training in four faculties: sports professional training, coaching and teaching, physical education for working with people with disabilities, as well as sports management and organization of sports events.

Students under 25 years of age don’t pay any tuition fees. The university now has  500 students. The training program is 3 years long, plus a 2 years master’s program. The university has a course in English.

In order to attract additional tourists from neighboring Andorra, do not you plan to run a regular bus service to connect them, such as between Andorra and the Spanish city of Seu de Urgell?

It is a good idea to offer tourists a “package service” with the possibility of going skiing in Andorra, France (in Font-Romeu) and in Spain (next to us there is the town of Puigcerda, where there are two ski stations). We are thinking about offering tourists the chance to visit all 3 countries during a single tour, but this is something that is more for the travel agencies to decide.

Font-Romeu is famous for the fact that outstanding athletes lived and trained here. Could you name some of them?

Yes, an example is Martin Fourcade, a French biathlete who won four Olympic medals (two gold and two silver), 10 world champion titles, 10 crystal globes and 63 individual victories; Kilian Jornet, who is known as a “heaven rider”. He is a professional mountaineer and athlete, a long distance runner who made history thanks to the fastest ascent and descent of the Matterhorn, Mont Blanc, Denali, and Everest.

In addition, I could name the famous French swimmer Camille Lacourt, and French athlete Colette Besson.

In general, I can say that sports teams from worldwide come to our city regularly for training: including skiers, swimmers, and biathletes. About 70 medals during the last Olympic Games are medals won by athletes who trained in Font-Romeu.