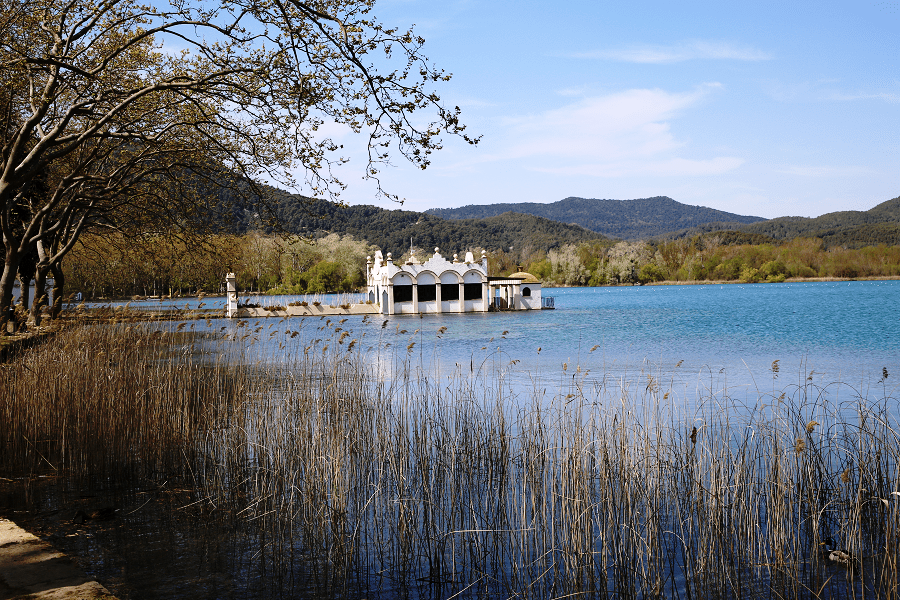 Banyoles (cat. Banyoles) is a municipality in Spain, Catalonia, the capital of the Pla de l’Estany region, in the center of the province of Girona.

Lake Banyoles is the largest natural lake in Catalonia. It is also the source and main identity of the town of Banyoles. Its length is about 2150 m, the maximum width of the northern petal is 775 m, and the width of the southern one is 725 m. The surface area is 111.7 hectares, and the maximum depth is about 45 m, although there are places where craters reaching a depth of 120 m.

The lake and its basin are considered the largest karst complex in the Iberian Peninsula and represent an extremely valuable ecological system. Studies in the second half of the twentieth century have shown that the lake is fed underground by aquifers from the north and west, in the Alta Garrotxa region.

The water in the lake is clean, and the ecology is impeccable. Lake Banyoles is located near the Garrotxa volcanic conservation area, famous for its eco-routes.

Located west of the municipality of Bagnoles, the lake has been declared a territory of natural interest (PEIN) by the Generalitat de Catalunya. In 2003 it was included in the Ramsar List of Wetlands of International Importance and was proposed for inclusion in the Natura 2000 network in the Mediterranean region.

During the 1992 Summer Olympics in Barcelona, rowing competitions were held on the lake and in the town of Banyoles.

A walk along the Water Canals will introduce you to the ancient buildings and infrastructure of Banyoles (locks, mills, laundries and smithies), built by the Romans.

The Pudosa Spring Balneari de la Font Pudosa (cat. Balneari de la Font Pudosa) is a cultural heritage site of local importance. It was opened in 1862 near the source of Pudosa and now is famous for its cold sulphurous calcium water. It’s currently in a deplorable state. In 2014, the Friends of the Puda association was created to restore the source.

The Regional Archaeological Museum of Bagnoles (MACB) is an archaeological museum in the Pia Almoina building in Place de la font número 11 (placeta de la font número 11). It preserves and displays all those collections that come from the archaeological sites of the Pla de l’Estany region. It is also part of the Catalonia-Girona Local Museum Network. Founded in 1933, when the city council of Bagnoles, after the discoverings in the Roman village of Vilauba in 1932, made a decision.

The Municipal Theater (cat. Teatre Municipal) is a concert hall located on Carrer Pere Alcius street. It was opened on April 10th, 1995. Located next to the City Hall, the City Theater is the only venue in the region that offers a stable program of performances throughout the year, from October to June.

The Performing Arts Factory (Cat. Factoria d’Arts Escèniques) is a cultural institution for training, production and exhibitions of the performing arts. Located at Carre de Baldiri Reixach, 403. The building was visited by the Spanish Minister of Culture Gonzalez Sinda in October 2010, and its first premiere took place on March 27, 2011, but the stage arts factory was officially opened only on December 20, 2011.

The Museum of Darder (cat. Museu Darder) is part of the Network of Local Museums of Catalonia-Girona. It is one of the oldest museums in the Girona region. Opened on October 22, 1916, it underwent several changes before its complete renovation, which began in 2003. In 2007, he reopened its doors by including a special section in the natural history collection.

La Draga (cat. La Draga) is an archaeological site, which is considered one of the oldest agricultural and livestock settlements in the north-east of the peninsula. It is located in the municipality of Bagnoles, about 40 kilometers from the Mediterranean coast and about 40 kilometers south of the Pyrenees. It was discovered in 1990 and excavations are still ongoing.

Slightly more than half of the springs in Banyoles are urban. Currently, water comes from the lake after its water was considered potable after the 1970s. The Pudosa Fountain is the most emblematic natural fountain.

The town of Banyoles has a long tradition of fairs. Fairs and markets of all types and themes are organized, some of which are almost 40 years old.

There is a weekly market every Wednesday morning in Banyoles. In this market you will find products (fruits and vegetables, legumes, cheeses, fish), kiosks with clothes, linen, accessories, industrial goods.