Vienne and its Roman heritage • All PYRENEES · France, Spain, Andorra

Vienne (Fr. Vienne) is a commune in southeastern France, located 35 kilometres south of Lyon, at the confluence of the Gère river and the Rhône. Today, it is only the fourth largest city in the Isère department, of which it is a subprefecture, but was a major center of the Roman Empire.

Before the arrival of the Roman armies, Vienne was the capital city of the Allobroges, a Gallic people. Transformed into a Roman colony in 47 BC under Julius Caesar, Vienne became a major urban center, ideally located along the Rhône, then a major axis of communication. Emperor Augustus banished Herod the Great’s son, the ethnarch Herod Archelaus to Vienne in 6 AD. 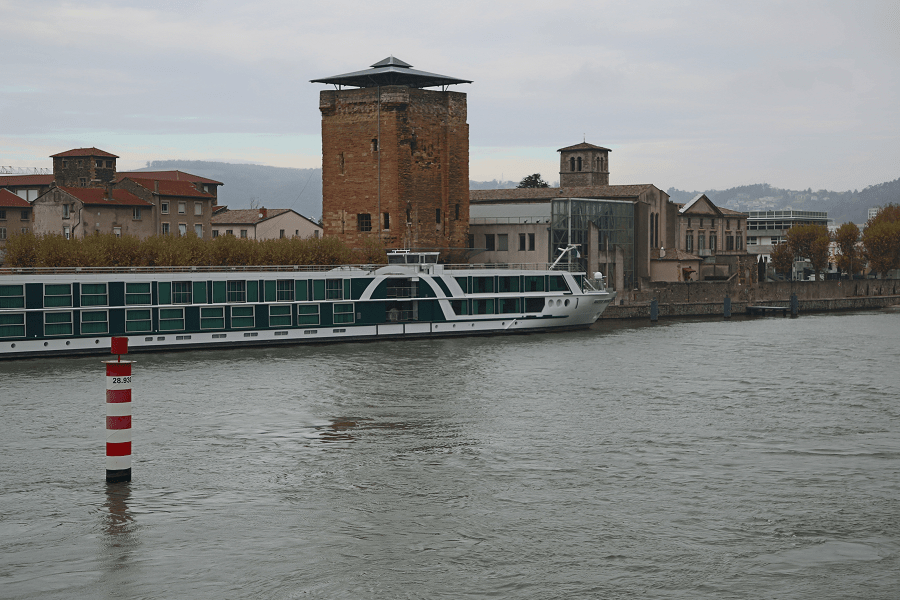 The city of Vienne enjoys a strategic position crossroads, near the main roads of North / South and East / West.

Labeled “City of Art and History” since 1990 by the Ministry of Culture and Communication, Vienne shares with visitors its rich heritage and its quality of life.

Today the town is a regional commercial and industrial centre, known regionally for its Saturday market. A Roman temple, circus pyramid, and theatre (where the annual Jazz à Vienne is held), as well as museums (archaeological, textile industry) and notable Catholic buildings, make tourism an important part of the town’s economy. 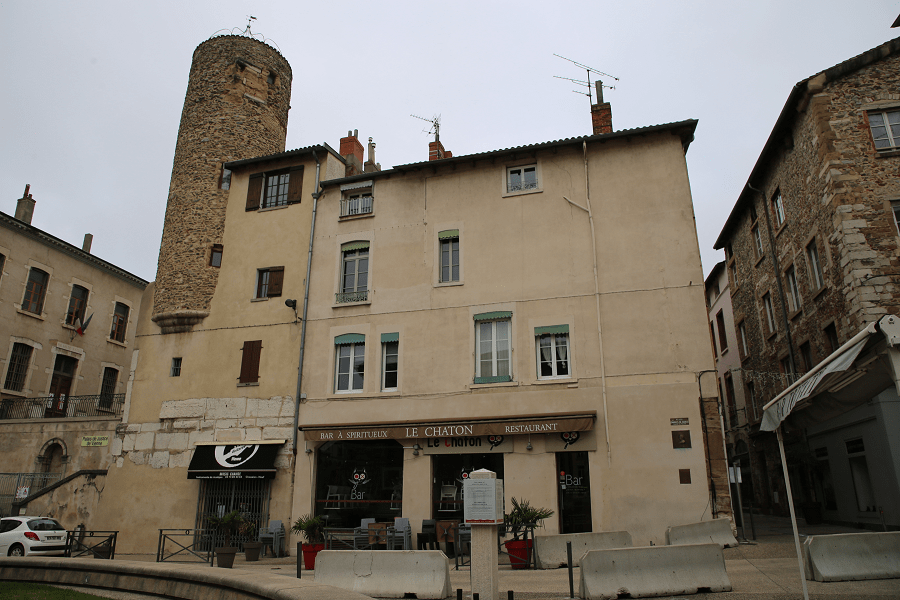 The temple of Augustus and Livia is a Roman peripteral sine postico hexastyle Corinthian temple built at the beginning of the 1st century, which was located in the city centre of the ancient city of Vienne, also corresponding to the centre of the contemporary city of Vienne. The temple is dedicated to the imperial cult, to honour the Emperor Augustus and his wife Livia.

The Ancient Theater of Vienne was built in the 1st century of the Christian era. The Ancient Theater of Vienne is classified as a historical monument by the list of 1840. The theatre is to the east of the forum. It has 30 steps for the upper mænianum, separated by a 1.5 m high wall from the 12 steps of the lower mænianum (0.45 m high and 0.91 deep in limestone blocks resting on a masonry or on the rock). 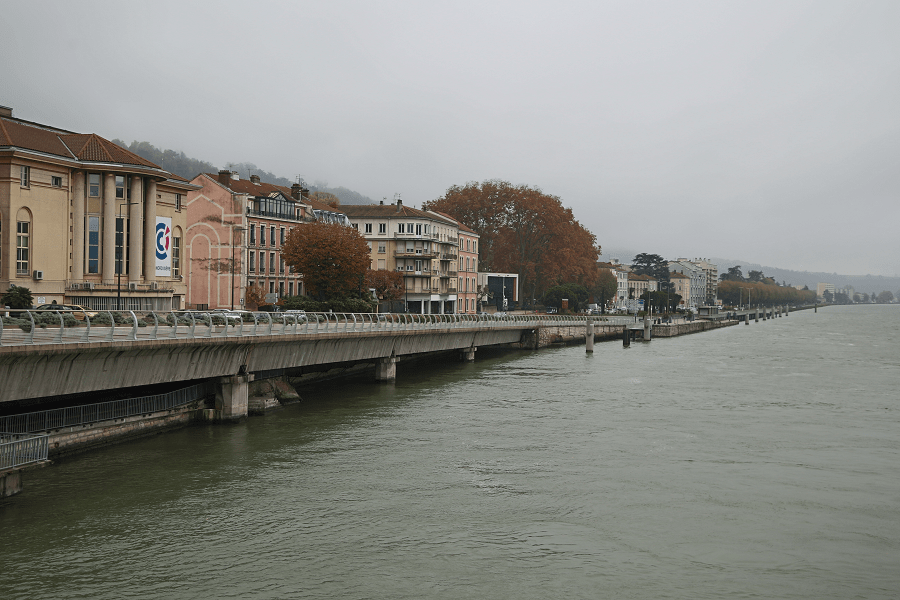 The Roman Circus of Vienne is an ancient Roman monument in the city, built at the end of the second century. It is known from nineteenth century excavations. The only thing that remains visible today is a unique vestige of its kind, commonly known as the Vienne pyramid, and locally simply “the Pyramid” or “the Tomb of Pilate”. It is the only ancient Roman monument to remain standing in France.

The Saint-Maurice de Vienne cathedral is the Old Cathedral of the Archdiocese of Vienne, mentioned in 1341 and whose archbishopric was suppressed in 1790 during the French Revolution. Until this date, the cathedral was also the seat of the Primacy of the Seven Provinces. Today it is the co-cathedral of the diocese of Grenoble-Vienne. Saint-Maurice Cathedral is classified as a historical monument by the 1840 list. 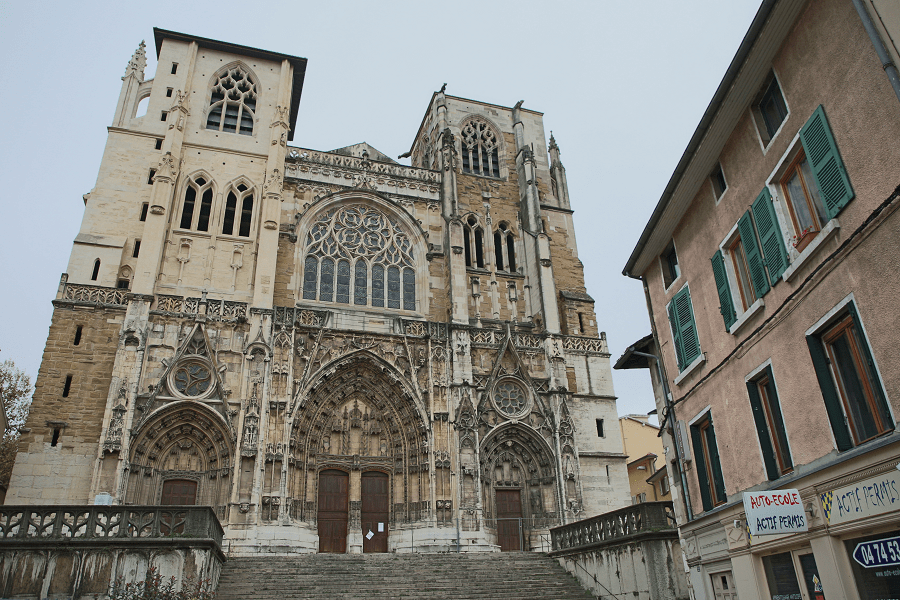 The Château de la Bâtie is a former thirteenth century fortified castle whose ruins stand in the town of Vienne on the Rhône. The castle is subject to registration as a historic monument by decree of 10 December 1926.

The Center for Contemporary Art La Halle des bouchers is a municipal contemporary art centre opened in March 2014. It occupies the former Butchers’ Hall, which is a sixteenth century building located in the old city centre. 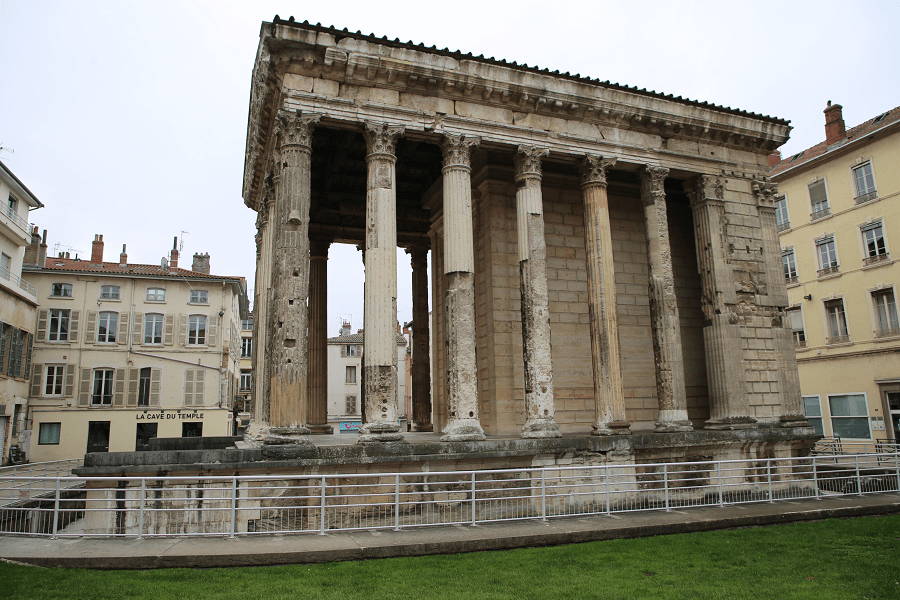 The Museum of Fine Arts and Archeology at Place Miremont presents various collections from the Neolithic to the twentieth century. Opened to the public in 1895, it retains a museography close to the beginning of the twentieth century: overhead light of the painting salon, but also accumulation, old display cases …

The Saint-Pierre archaeological museum in Vienne is a lapidary museum housed in the old Saint-Pierre church. The lapidary museum opened its doors in 1872. Most of the current museography was put in place on this occasion: the collections are stacked to reinforce the architecture of the place, without concern for historical coherence between them. They give rhythm to the space in a solemn way. Since renamed the Saint-Pierre archaeological museum, it presents works carved in stone (limestone and marble) from Antiquity and the Middle Ages. 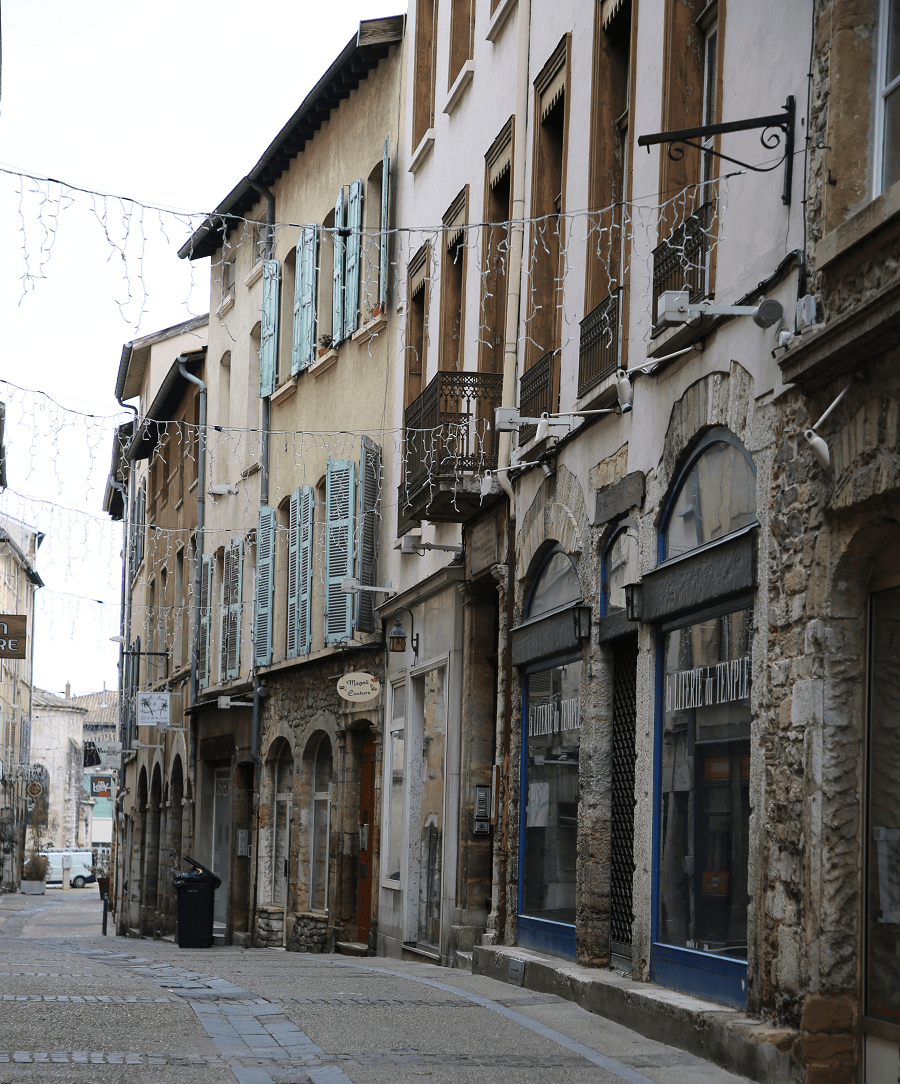 The cloister museum of Saint-André-le-Bas is made up of two parts: the temporary exhibition rooms of the Vienne museums and the cloister itself. In it are presented a collection of inscriptions from the fourth to the seventeenth century and elements of liturgical furniture. This presentation is the vestige of the Museum of Christian Art which included the temporary exhibition rooms until 1977 date of the current development.

The Textile Industry Museum, one of Vienne’s five museums or city sites, is located in the Gère Valley. It has been installed in the former Proplan factory since 2019.

June-July: Jazz à Vienne – annual festival at the beginning of summer for two weeks in the Roman Theater Festival, which brings together international jazz stars. It remains the biggest jazz festival in France in summer, just like Montreux or the North Sea Jazz Festival. Every evening, concerts take place at the ancient theatre, the largest Roman theatre in Europe. During the day, other (free) concerts take place in various places in the Viennese country, including the Garden of Cybele in Vienne. 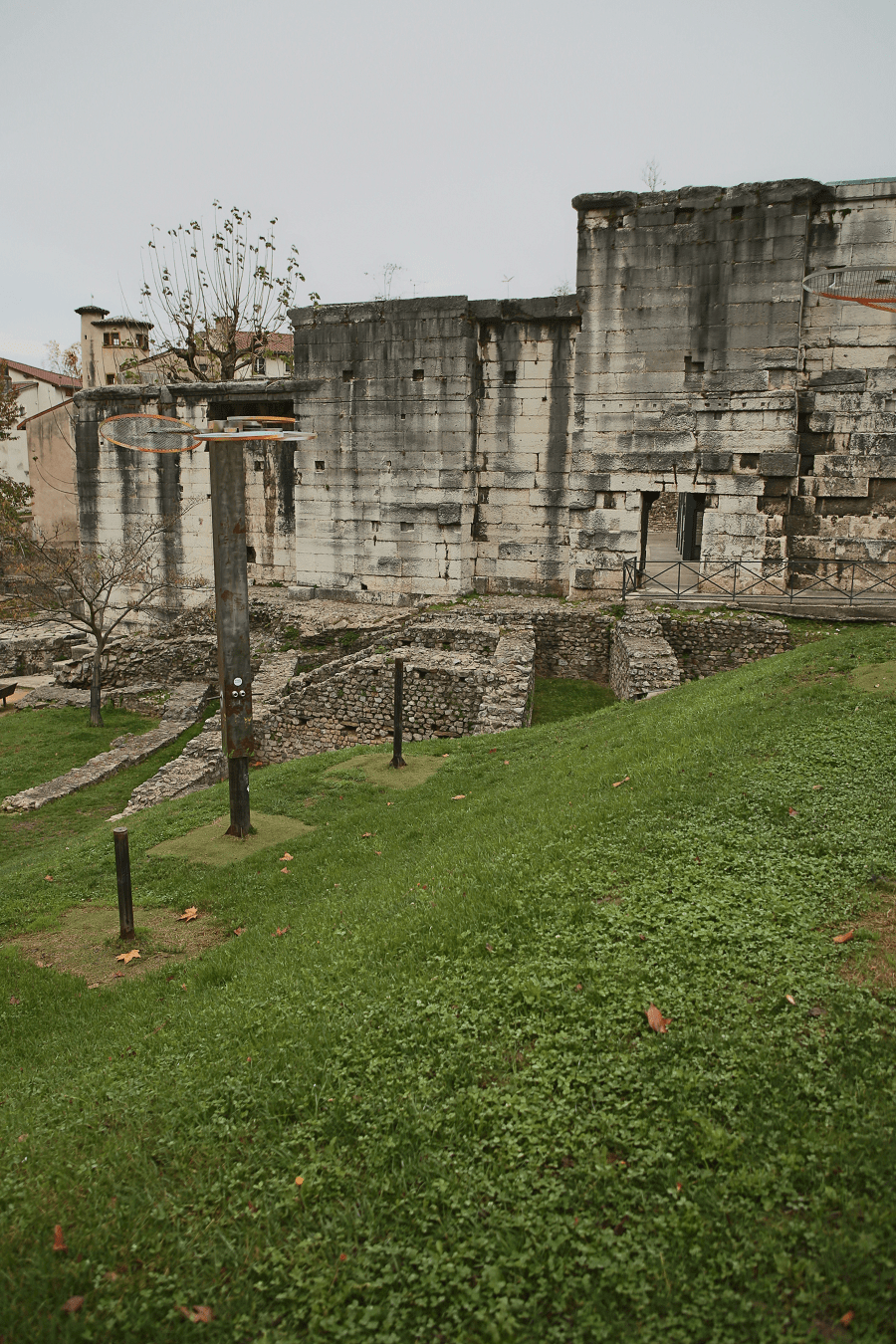 July: Les Authentiks Festival, since 2002, with an evening of concerts of contemporary music. 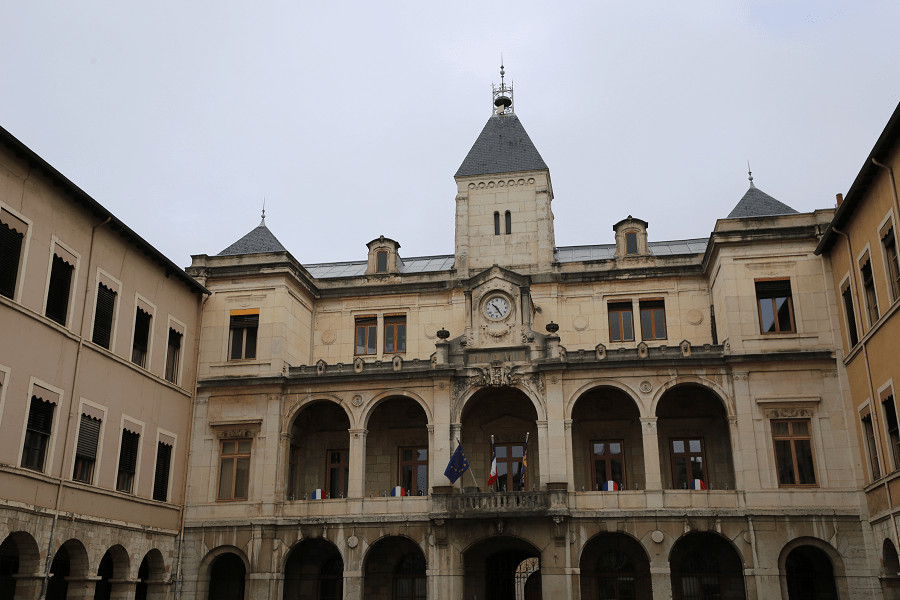 The second largest market in France takes place in Vienne city centre every Saturday morning. Offering a host of local produce and specialities at over 5 km of stands, it’s a gourmet’s paradise!

The nearest international airport is in Lyon.

The Aerodrome de Vienne – Reventin located in the commune of Reventin-Vaugris 8 km south-southwest of Vienne was established in 1934. From the early 1990s, several entrepreneurs decided to build with the support of elected officials premises and the chamber of commerce and industry, warehouses for their companies leading to the relocation of the runway. Now the airport welcomes only sport aviation. 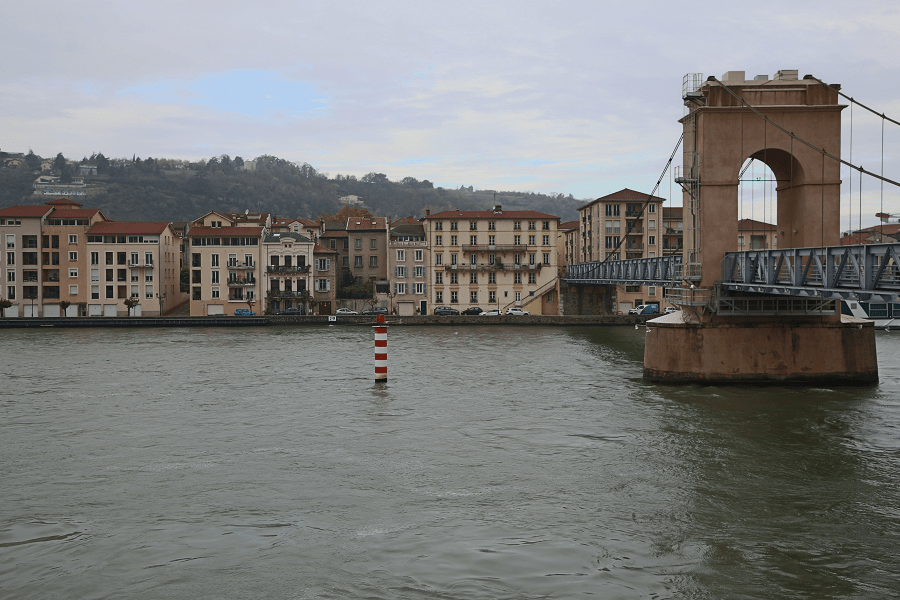 The Vienne station is a railway station on the Paris-Lyon line to Marseille-Saint-Charles located on the territory of the commune of Vienne.

It is a station of the National Company of French Railways (SNCF), served by TER trains Auvergne-Rhône-Alpes.

Distances to the main cities by car: