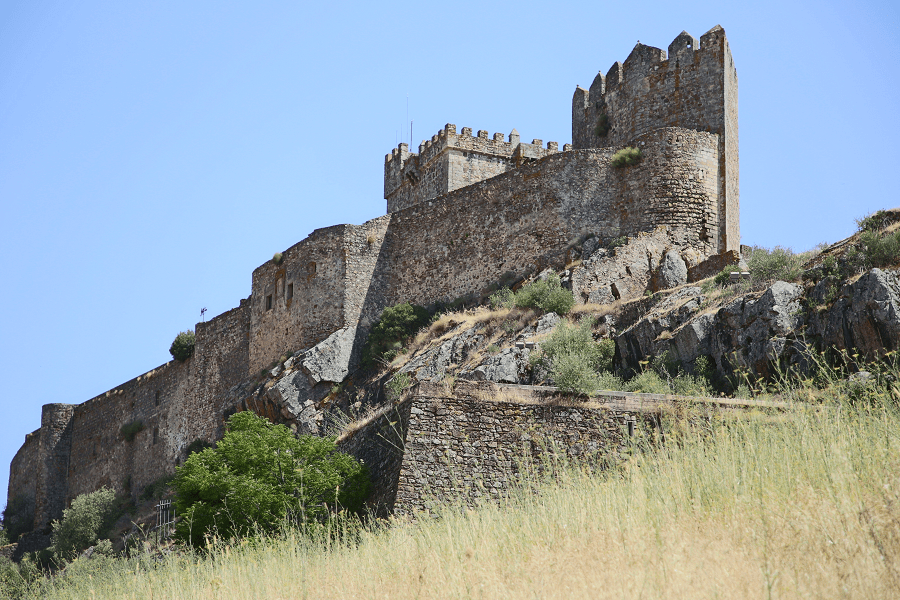 Alburquerque is a municipality, belonging to the province of Badajoz (autonomous community of Extremadura, Spain).

Luna Castle. The castle of Alburquerque is a fortress from the late Middle Ages that stands on a hill above the city. The fortress is also known as Castillo de Luna by one of its main builders, Don Álvaro de Luna, Master of the Order of Santiago and Constable of Castile. The castle rises on top of a cliff in the Sierra de San Pedro, dominating over the town of Alburquerque and the region of Los Baldíos. 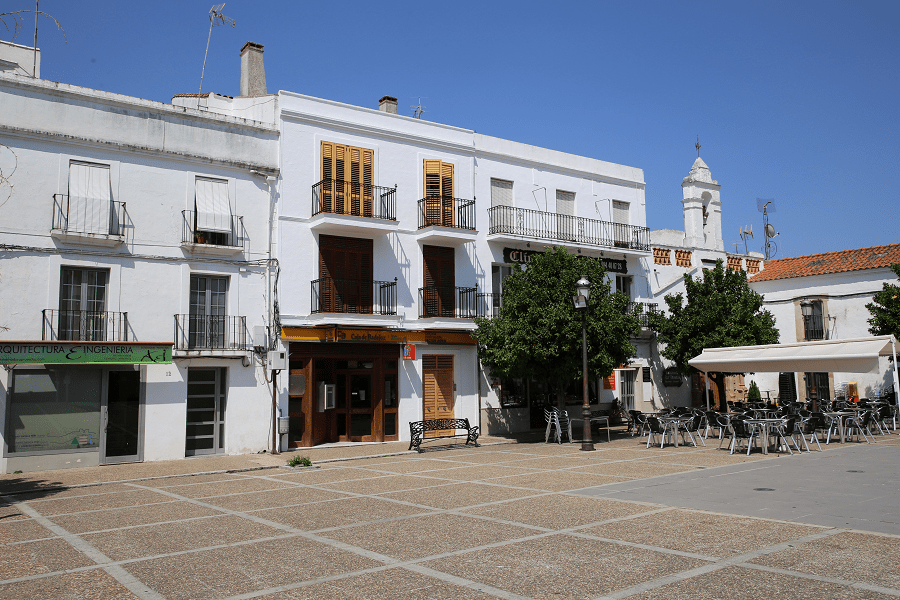 It is one of the most outstanding medieval fortresses in La Raya, as it is located very close to the border with Portugal, halfway between Valencia de Alcántara to the north and the city of Badajoz to the south. The fortress was declared a National Monument in 1924 and an Asset of Cultural Interest on November 27, 1933. 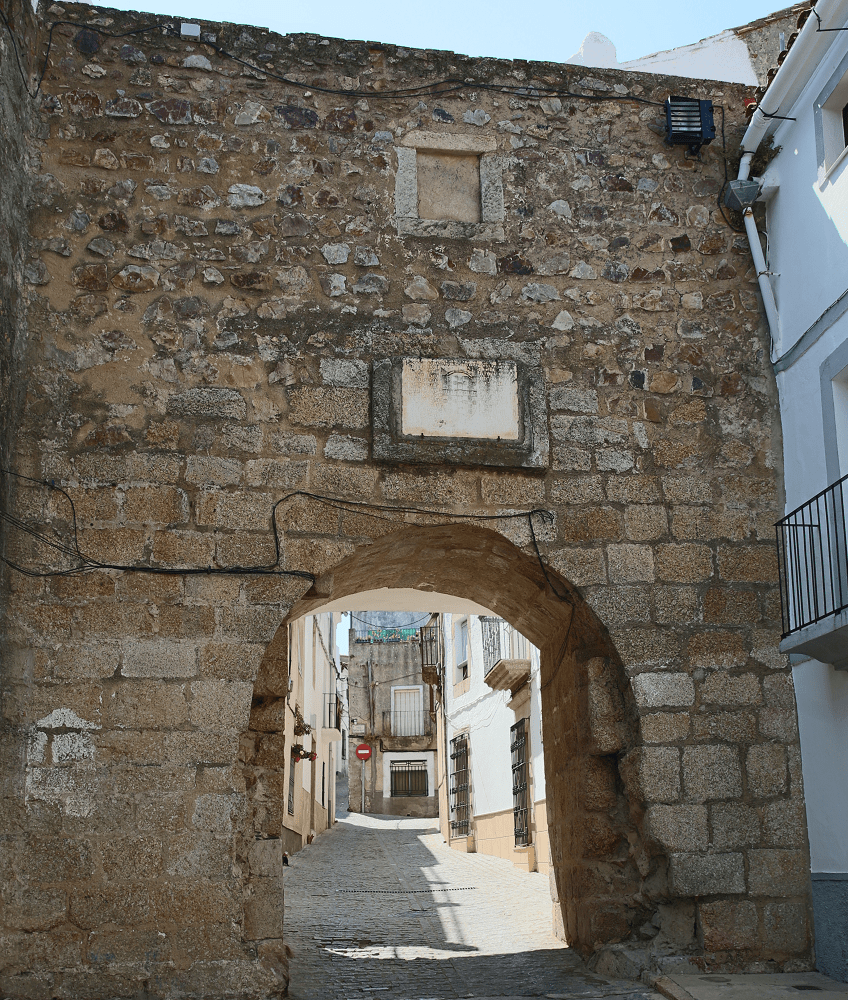 Castillo de Azagala is located 12 km, east of the town. Today it is abandoned. It is built of masonry and ashlar. It has a rectangular shape and is divided into three rooms. We can highlight the Torre de Armas, which has a square shape and is made of granite and masonry. This tower is joined by a wall to the Smoke tower, finding on its ground floor a chapel that is currently empty. This castle is private property and it is only possible to visit its surroundings. 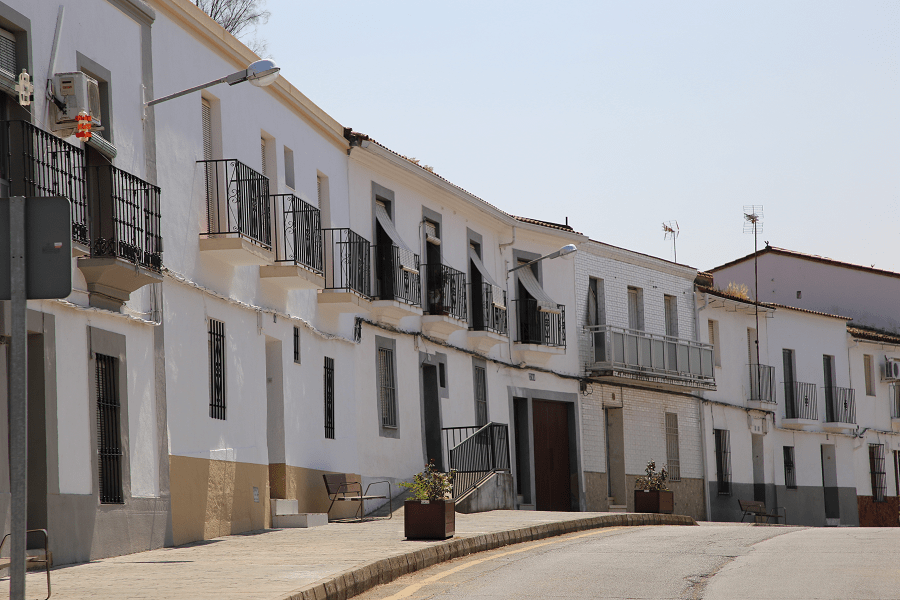 Medieval gothic quarter is known as “Villa Adentro”, it is located inside the town wall. Declared a Historic-Artistic Site. The streets of this neighborhood are arranged along and high up the hillside. Its main road is the right street that runs from east to west, from the Puerta de Villa to the Puerta de Valencia. The houses in this area are small and have a single floor. Houses that are built in masonry or granite have a white facade. 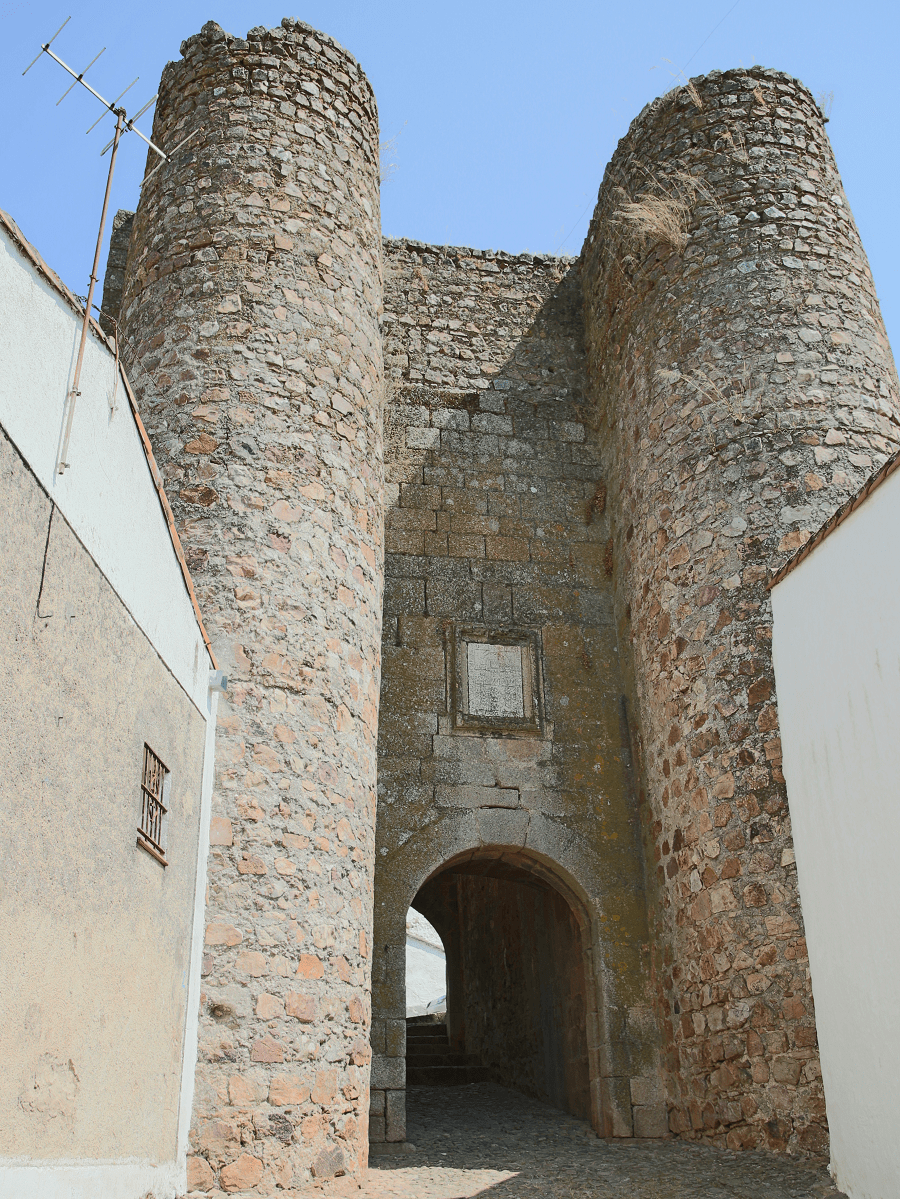 Walled enclosure has an average height of 10 m (meters), has several defensive towers such as the Torre del Reloj, Torre Cabera or Torre Mocha. In the defensive wall known as the “Recinto de Los Portugueses” is located the Interpretation Center of Castles and Medieval Art (pending opening).

Door of the Villa. It was the main access door to the walled enclosure. It is located in front of the Church of San Mateo. It consists of a projecting tower with a square plan. In the outer arch the shield of Alonso Sánchez is located. Inside we find an open chapel. 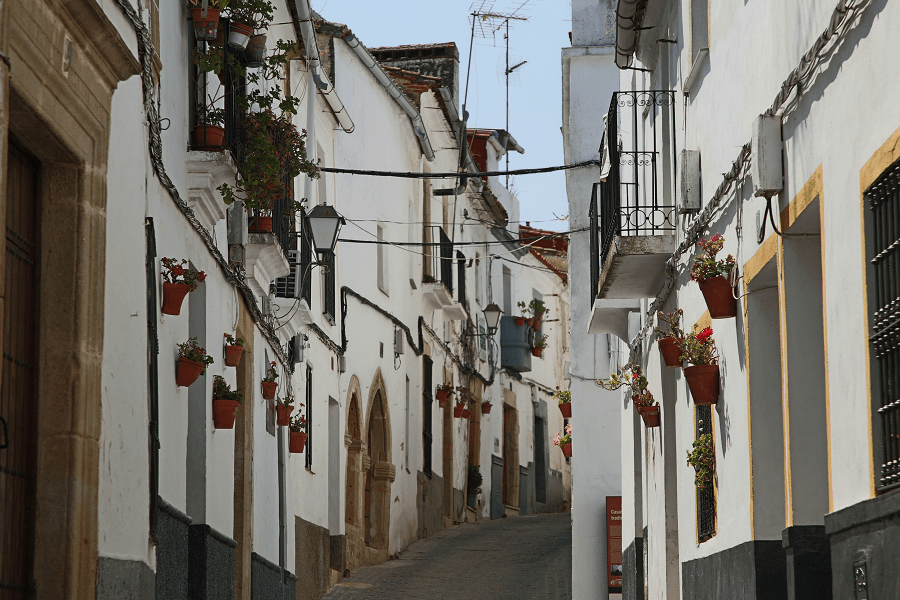 Gate of Valencia. It is flanked by two 13 m high cylindrical towers. Consists of two doors, the first semi-circular and the second pointed. This entrance has a defensive system.

Church of Santa María del Mercado. It is located within the town walls, near the entrance door to the castle grounds. Built between the 13th and 15th centuries, with baroque additions from the 18th century. Inside is the Cristo del Amparo, a carving of enormous artistic value.

Church of San Mateo. Its style is a mixture of ogival and Spanish Renaissance (16th-17th centuries).

Church of San Francisco. Construction began in the first quarter of the 17th century, it was part of the old Convent of Franciscan Religious of the Mother of God. The main altarpiece is in the Baroque-Churrigueresque style.

Convent of the Mother of God. The unique beauty of the cloister stands out. Its community was founded in 1506. Currently, youth hostel. 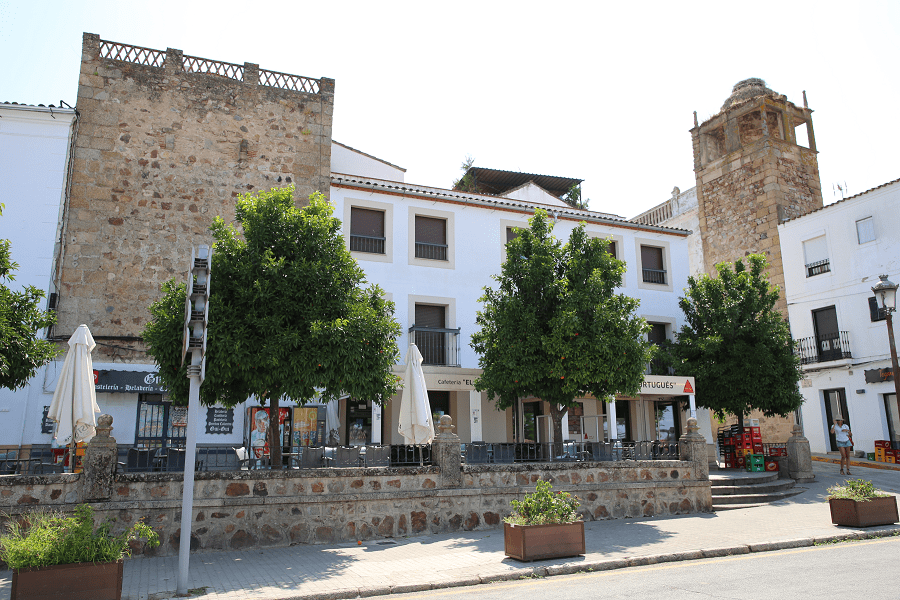 Hermitage of Our Lady of Solitude. It is a building from the 18th century, in the Baroque style. Nowadays it is a quaint and peculiar cafeteria. From the outside, you can only see the main entrance, as the hospital is on its right and private houses on its left. This portal has a semicircular arch, adorned with tetrafolios. The interior is rectangular.

Sanctuary of Our Lady of Carrión. It dates from the 15th century. The altar is in the Baroque-Churrigueresque style, with a dressing room. Located about seven km from the municipality, on the banks of the river Gévora.

Rock paintings of the Risco de San Blas. Located next to the Cruz de San Blas. On the southern face of the mountain is one of the main shelters of schematic paintings in the region. They were declared a National Monument in 1942. They date back to the Bronze Age, and in the shelter that covers an area of ​​about three meters long by two wide, you can see schematic figures that show a visual vocabulary that those Neolithic men used to record ideas, beliefs or concerns. 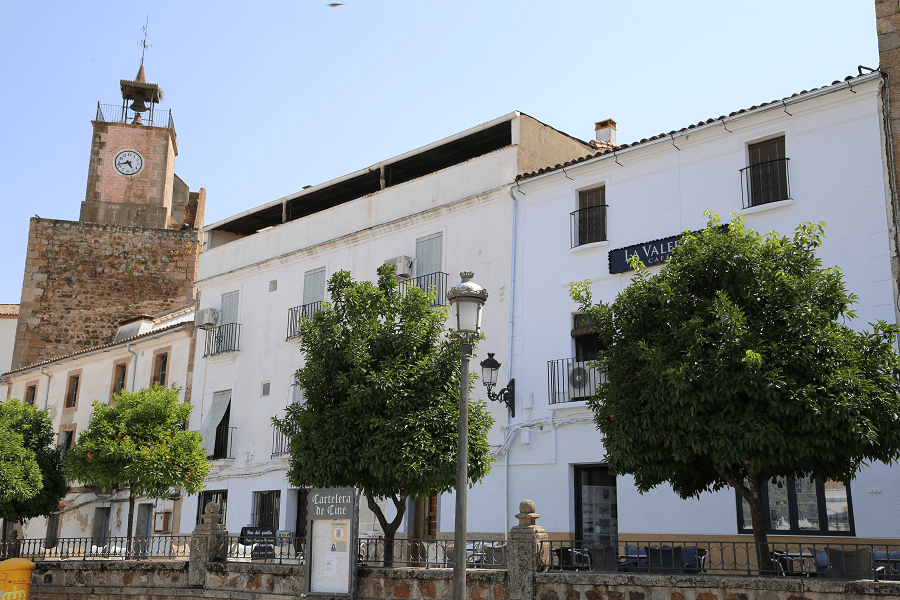