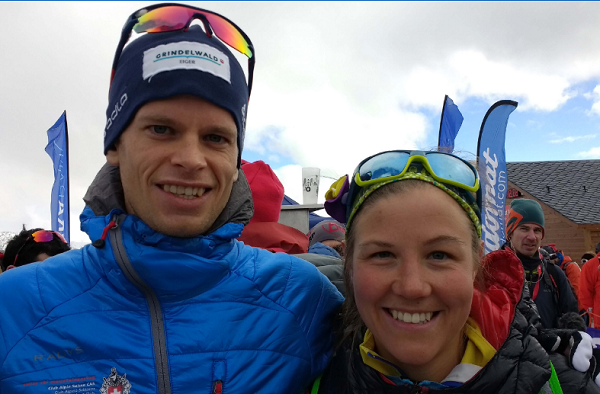 The young Swiss skier Werner Marti and the Swedish Emelie Forsberg were the winners of the 2017 Font Blanca Vertical Race, over rivals that were, in theory, the favourites to be on the highest step of the Vallnord Arinsal podium.

The competition took place at the unmatchable scenery of the Marrades ski trail on the Vallnord Arinsal sector, with perfect snow conditions. The stage, perfectly known by racers and fans alike, received once more the praises from everyone that could complete the route.

The weather also sided with the organizers this time. The day started cloudy but it improved noticeably as the start time approached.

The duel between Killiand Jornet (ESP) and Rémi Bonnet (SUI) had an unexpected guest in the likes of the young swiss racer Werner Marti (SUI). Up to the middle of the race, Bonnet kept the lead of the front group and it seemed unlikely that the winning trophy could slip away from his hands at that time. But in the last part of the climb, his fellow countrymen Marti attacked and nobody could follow his pace. Jornet and Bonnet fought for the second place in a sprint, and this time the 2016 champion was the strongest clearly passing in front.

During the Vertical Race, Jornet got back some positives vibes and summarize his performance during the weekend in this way: “Two days ago I’ve had a tooth pulled and I’m still under antibiotics. I’ve then to value positively my performance in Andorra.”

Meanwhile, Rémi Bonnet felt satisfied with his podium place and added: “I’ve got the win in the Espoir category and the third place in the Senior Men. I’m very satisfied with my performance, to race in Andorra is always a pleasure.”

Laura Orgué was the rival to beat and in this occasion the catalan could not keep the title she got last year. At the climb’s middle point, Orgué and Mollaret seemed to distance definitely their rivals. Forsberg was losing a few meters over the leaders.

The swedish reaction, second last year behind Orgué, during the second part of the race was spectacular, recovering all the lost ground and having the sufficient strenght to pass the french Mollaret in a very close finish line sprint.

As commented before, among the ISMF Senior Espoir Men, Rémi Bonnet tilted in his favour the duel with Oriol Cardona (ESP) that had beaten him yesterday duing the Indiviual Race, meanwhile among women the italian Alba de Silvestro got, for the second year in a row, the double at the Font Blanca.

In the ISMF Junior Category, the italian dominance showed yesterday during the Individual repeated with the same racers, Davide Magnini for men and Giulia Murada for women. In both cases their rivals at the finish line were over 1’ away.

For another year, the Andorran Mountain Federation (FAM) and its colaborators have brought a successful start of the SkiMo World Cup. The 2017 Font Blanca has proclaimed the first winners of the season after two days of a frantic activity for the athletes as well as for the organizers.

Jaume Esteve, president of the FAM, commented after the trophy ceremony: “Thanks to the weather, we demonstrated the organizing capabilities that we have in Andorra. I’m very satisfied on how the FB’17 developed.”

The mind of the FAM members is already set on the FB’18 in which they will seek to improve the event as they have been doing every year, using the experiences adquired during this and other past editions.