Pascal Arbez-Nicolas aka Vitalic talks about passion for Slavic aliases, the importance of the visual aspect of his shows, his looking for strange stories that leave questions for musical videos, plans for the new album and his way of life during the pandemic

Pascal Arbez-Nicolas, mostly known in the musical world under the alias Vitalic, is one of the leading and incredibly productive forces of the French electronic scene. Having such highlights like four successful Vitalic albums which covered a wide spectrum of genres from electro, punk to post- disco and emotional big room rave gems; bunch of brilliant, cinematic videos and remixes for top and legendary artists like Giorgio Moroder, Moby, Daft Punk—Pascal finds also time for developing a side project Dima, that is responsible for the rough techno side of his variable sound.

We had a chance to catch Pascal at the quarantine in South France where he is trying to bring back the best from the isolation and working hard every day on finishing the new album. We talked a bit about the plans for the new record, coming back to the punk roots, approaches in creating videos and importance of the scenography and lighting that makes each Vitalic show a strong audio-visual experience and some other interesting things.

Hi Pascal! Thank you very much for finding time for us. Would be interesting to know what you have been up to recently; is there some new music we can look forward to?

At the moment I am working on a new Vitalic album. I had plans for releasing in the next few months, but probably because of the virus situation it will be moved, as we planned to make a presentation of the album with a big live show and then a tour, like I usually do. We booked some venues for shows, but we are not sure when we will be able to make it.

Usually your live shows have impressive and conceptual stage production. Are you planning to have a solid looking show for the new album as well?

Normally, for a new album I prepare well-produced big stage shows for festivals and big venues and do some gigs in smaller underground venues. This combination of big and small events always works for me, so I think I will do it in the same way this time too.

And I’m, of course, passionate about lighting and scenography for big shows, that’s always a big part of the performance that gives each time an ability to tell a new story, and this is what I want to do.

Do you take part in the creative or technical process of the production of your shows?

I work with a team of architects, scenographers and light engineers. Each time at the beginning of each production we talk about the concept of the album, then they produce a few ideas. We pick up one of the ideas and work together on the hall production. I can’t help with the engineering part as I know nothing about it, but I direct artistically the hall process, usually we go all together as a team to the south of France for a month and work on the show. 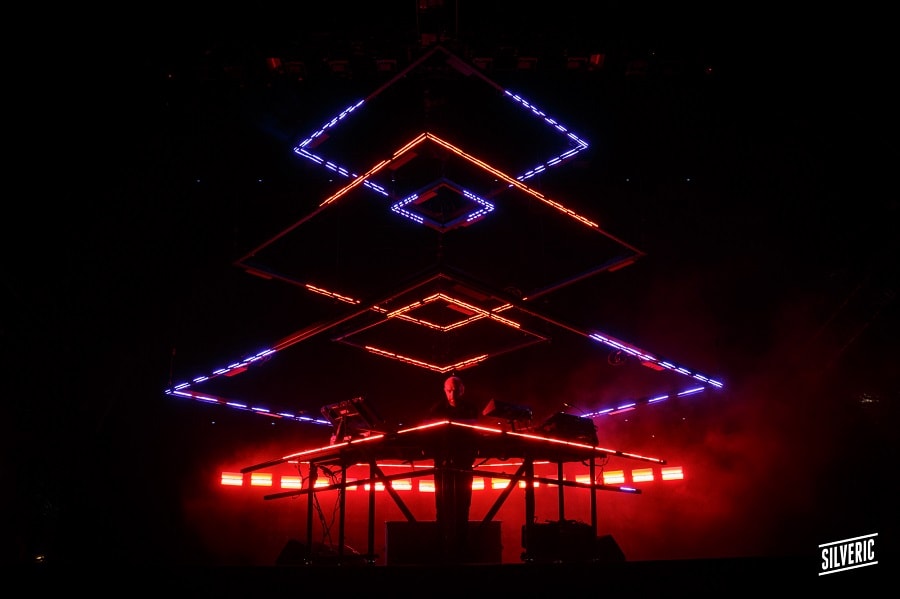 The other strong part of the visual aspect of your music are brilliant videos, with an interesting and ambiguous plot. What is the usual way of creating these great pieces and who brings the ideas for them?

Usually the directors send me some ideas and then we work on them together. And I really like to put storytelling in most of my videos that keeps the link with the music but also brings them to a category of a short movie which can live on its own. I am always looking for this cinematographic part.

From now on, what are your favourite Vitalic videos you have ever made?

I really like “Stamina”, which is a kind of a hysterical, strange short movie.

Also, I realize that some of my videos are really sexy, while the project Vitalic is not mostly about sex and seduction. It’s a kind of more serious thing, but my videos are often with beautiful women and sex intentions. One of the sexiest videos that I really love is “Waiting For The Stars”. I really like it’s ‘70s style with a lot of glitter, beautiful women and cosmic surroundings.

One of my favourite videos is “Fade Away”, which is a good example of a short movie with a clear plot, that can live on its own too. Was always intrigued by it and was answering myself—what kind of treasures in the case led to such a bloody mess and trail of bodies?

Actually, I don’t know, and I like to pick up the stories for the videos that leave questions. Think this looking for bizarre stories was heavily influenced by the Daft Punk video “Da Funk”. I remember I was so impressed when I saw it for the first time when I was a student, it was so bizarre and left so many questions. I try my videos to be alike in the way of the storytelling.

And what’s happening with your side project Dima that is oriented on a more techno sound, any plans for releasing new music under Dima alias?

I am now into finishing the new Vitalic album. But after the lockdown, when we finally have the show a presentation of the album, I will do some more techno stuff, as Dima and will release it.

Where did this passion to Slavic names that you use for your artistic projects came from?

It came from the fact that I was very into Russian culture since I studied Russian in school and university and went a lot of times to Russia and Ukraine. I picked the names Vitalic and Dima for my projects because I just like the way they sound; there is a lot of energy in it. 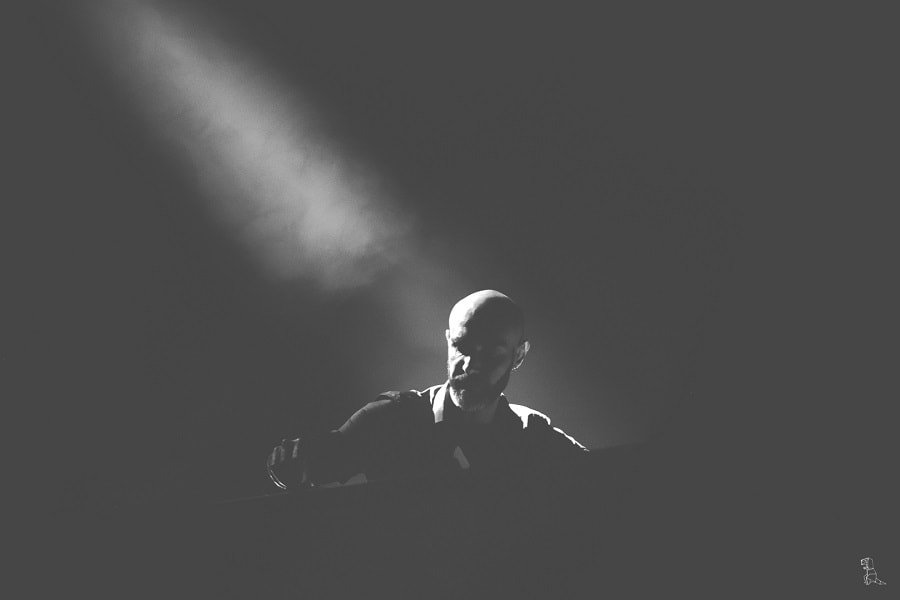 You have an impressive collection of remixes that you did as Vitalic for big and legendary artists like Giorgio Moroder, Moby, Daft Punk. Any confirmed plans for some exciting remixes soon?

At the moment I don’t do much remixes, maybe a couple in a year, not more. And I don’t have any plans for big names, I’m trying to keep more underground, the last ones that I’ve made was for French rock band Louisa that I really love and also for a track “Space Ship” of Mexican producer Paulor, which turned to be a big hit last summer. From now on, I don’t have any remixing plans as I’m totally into finishing the new album I mentioned.

All your albums are covering different genres, from electro punk to post disco and big room rave gems. What kind of vibe and genre the new album will mostly follow?

I am going back to punk, I need some rock now, this rough energy like on my first album “OK Cowboys” that I did 15 years ago.

My sounds change over time and they are influenced by the things that are happening around me and my mood. And I don’t care about what is cool at the moment, like when I did back in 2009 my second album “Flasmob” that was disco and disco was a dirty word at that time; it wasn’t cool at all to do such music. But I just felt this way, it was mood and I did it. And just a few years after the album was released, we saw little by little disco coming back.

Now mostly it is the hip-hop era—rap is the biggest thing—but I have a feeling that soon a rock revival will happen and a new good rock band will appear.

Can we say that always a bit ahead of time?

I’m just following my instinct. I don’t pretend to be some kind of a musical meteorologist that is predicting the trends, I just do what I want and how I feel and somehow it happens that I feel the next big things that will be coming.

How do you fill your days now during the lockdown, with all these moved plans for the album release show and no gigs happening?

I am at my house in the south of France with a few of my friends now. We are having an absolutely normal daily life—we wake up in the morning, everybody works. In the evening we watch some movies and go to bed early and it’s almost the same every day. So it seems to be an absolutely normal life. The only thing is that we don’t go out, but the same thing is when I am in Paris just working on new music in my flat—I don’t go out much, so it is not really a big difference. The only thing I really miss is my family that I’m a part of now.

What are your general feelings about this crazy pandemic situation in your home country and all over the world?

I’m facing such a thing for the first and hopefully last time and really don’t know what to think about it as I don’t have a deep knowledge to make any statements. I just try to bring back the best out of this isolation and to use all this time for doing new music. But some of my family members were infected already by the coronavirus and it wasn’t a funny situation at all, they passed through terrible sufferings and thank God that nothing happened to them and they are ok now. And these restrictions with going out that my older members of the family are passing through are stressful too. Compared to their situation of being in the countryside, in fresh air and working mostly in the studio—it is not terrible at all. I really hope that it will be over soon, and we will get back to normal and I will be able to get all the planned things done.

Definitely going with you in this wish. Thank you very much Pascal for the interesting talk.