Viktoria Modesta as a futurist and an artist • All PYRENEES · France, Spain, Andorra 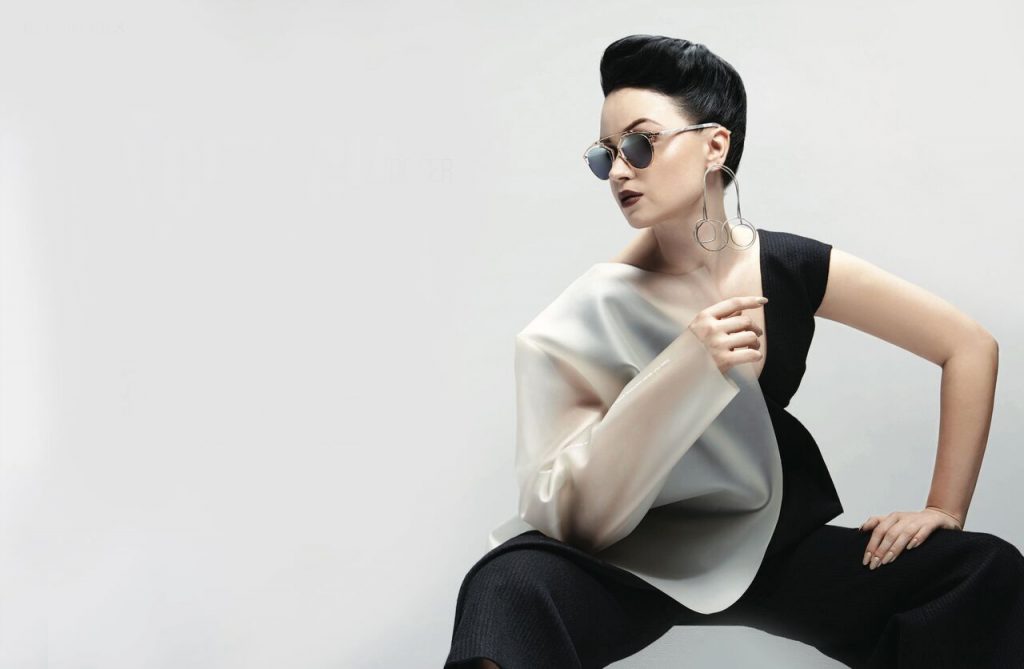 Viktoria Modesta is a contemporary artist that totally changes people’s views on disability in the modern world. Having, since childhood, a long-lasting health problem, at the age of 18  she had a voluntary below-the-knee leg amputation to improve her mobility and safeguard her future health. She is the first artist that decided to use a limb as a part of an artistic concept and image, proving that things that were associated before only with a disability can look like pieces of art and modern design. Viktoria’s first experience of international fame came after she took part in the closing ceremony of the Paralympics in London. She played the Snow Queen in the ice show (live music for which was provided by the world-famous band, Coldplay). The next step was her video “Prototype”, which was produced by Channel 4 and was first shown on one of the most popular tv shows – X Factor.

“Prototype” was a huge hit. It immediately turned Viktoria into a real star and she became the first bionic pop artist in the world. Also, ‘Prototype’ created a large platform to promote the ideas of transhumanism – the movement that aims to improve the human condition via the use of available technologies to eliminate aging and to greatly enhance human intellectual, physical, and psychological capacities. With such a powerful background, Viktoria also developed a successful modeling career including campaigns for many top fashion brands. At the moment, she is working on a new conceptual album that will be presented to the world soon. In her packed schedule, Viktoria found time for an interview with all-andorra.com in which we touched upon topics such as humanism, futurism, future plans and even a possibility of performing in Andorra soon. 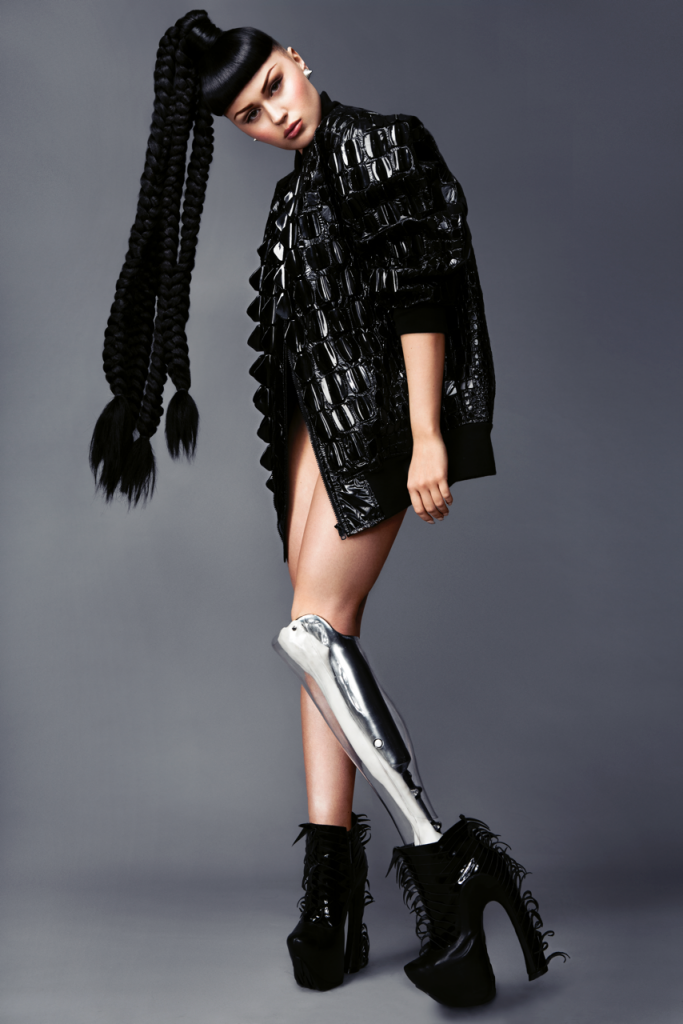 You are mostly known to the public as a singer with an eccentric and futuristic image. But there is also another side of your activity – being an MIT Media Lab Fellow and promoter of transhumanism. Can you tell us more about this side of your life and how important it is compared to your musical career?

I think my image tends to be different depending on the scene and the country. Globally my work got known as I was the first ever “Bionic Pop Artist” with the “Prototype” campaign video and helped establish a very real sci-fi, post-disability identity in culture. I started out performing art and music and the introduction of tech and science into my work happened as a by-product of me electing to have a voluntary amputation for health reasons and working with prosthetics in a design heavy manner.

I have been fortunate to be selected as an MIT Media Lab Fellow which brought a whole new world to my disposal and forced me to evaluate how I relate to post-human ideas, biohacking etc. In the past 3 years, I have been working on many projects bringing science and tech with pop culture to performance and live events. That part of my work isn’t always public. Amongst talks and research, the biggest quest has been to use my unique position of how I came face to face with the artificial and create content that shines a light on a much more humanistic and romantic approach towards a technologically advanced future.

I have a hard time fully resonating with the current ideology of transhumanism mostly because I share the view that we became transhuman the second we invented the most basic tools. The things I’m exploring right now are looking at transcending the human body in the physical sense through design and technology and beyond into the digital realm of avatar and AI. A so-called neuroprosthesis. I would like to think that my next body of work will be more of an educated and informed view of how innovation can impact us on a cultural level and a more holistic way of looking at our own creation all while presented in a multisensory experience.

As a supporter of future innovations and one of the leading faces of transhumanism, do you think that the art part will become more and more important in the super technological gadgets which are made for making humans life simpler and more convenient? For example, your prosthesis, as I understand is super technological on one hand, but on another hand, it is also a piece of art and modern design?

Personally, I feel that as a society our outlook on the future stopped being that of an excited nature around the retro-futuristic period of the 50’s when we let ourselves run free and really immersed ourselves with the application of design into our everyday life. From cars to household appliances we dreamed openly and had fun with the idea of the future. Since then, the tone from the majority of the media has been very dystopian. Technology is changing exponentially and people feel too intimidated to really feel like they have a part to play in that.

As someone who didn’t even finish school and is now in circles of scientists and inventors, I firmly believe that the future is ours to create, but it takes a curious mind. It’s easier than ever to learn skills that would allow you to really be a participant in how the future is shaped. To get there though, you need to see real examples of a more realistic and approachable way of dealing with that. That’s where I see my work being most effective. As an artist and futurist, I aim to create a conceptual vision of the human experience, something that is close to home and is firmly rooted in a human story.

I am good friends with many innovators that are working on solving medical and functioning problems with very sophisticated technology, but for me, I put my energy into bringing design, science, art, and technology to look for a deeper understanding of this permanent state of augmentation in our identity. Most of my collaborations tend to fuse different disciplines and form a new way of working where the human experience and being is at the core.

If it is possible, can you give us any hints about your future plans, making a new album or EP and any other exciting projects that are planned?

Without giving away too much, I started working on a new conceptual album that will be directly influenced by the process of the next endeavors. My themes are still about the transcendence of the basic physical self, and still on the positive side of history. My team and influences are more diverse and stronger than ever and I am hoping to deliver a vision where all the fragments get put together – of music, live performance art, content and some academic collaborations.

You have an exciting and interesting background with Russian, Polish and Latvian roots. You were born and spent your childhood in Latvia, moved to the UK, London, raised with the English culture and London’s multicultural vibe, and are now living in LA – does this cosmopolitan life experience affect your art?

Travelling and living in different cultures has definitely influenced my work. You realise that the more diverse culture you experience the more obvious it is that there is a common theme of humanity, imagination, and transformation that runs through it. I tend to look at everything from spirituality to poetry to understand on a more philosophical level the intentions and emotions from my work. Nothing beats a first-hand experience of different people and culture. That is a big issue in my opinion that affects the tech industry. People creating algorithms and technology that impacts and dominated our everyday life often has a very limited understanding of humanity, from wellbeing to consciousness. Everyone needs to engage with our rapidly expanding future to ensure that our human values stay at the forefront.

In which places that you had already lived, do you feel most comfortable in, in terms of the quality of daily life and the vibe that you need for your creativity?

I have to say that Los Angeles is really working for me right now, the city has been rejuvenated by a whole variety of new people from so many sectors. My favourite thing besides the weather and a much more pleasant lifestyle is the way the tech and space industry is fusing with Hollywood entertainment culture and art, I feel that it’s a time that we get to see new era visions of a technological future.

I lived in London most of my life and really enjoyed how that city toughens you up but after spending a long time travelling for work, it made me realise that life can be many things. Having nature close by, ocean, those are all things you usually associate with a holiday when you live in London.

Why not work hard and feel like you are on holiday at the same time? The only other place I ever lived in was Mexico City. It was one of the best 6 months of my life, the culture is so fresh and potent and don’t get me started on the food! There are still so many places to visit.

Your shows are really conceptual and contemporary and everything is well-synchronized like the sound, images and visual content. Do you produce all this stuff yourself or you delegate some of it to a creative team that is working under your guidance?

Being able to present a multi-sensory experience is at the core and it usually demands a very diverse collaboration. I tend to oversee every piece of work I do and even when it’s a big production I make sure everything is on hand and discard stuff that doesn’t sit right with me. But I have to say that casting a team for every project is what I love the most. Bringing people together to collaborate from different disciplines and seeing how they interpret some of the messaging that is important to me is super cool.

What do you know about Andorra and would you like to perform here if there was ever the possibility to do so?

I have never been to Andorra, but for me, it seems to be a beautiful country with a unique culture. I would be happy to go there as a tourist or even more so as an artist to perform if the opportunity was there.