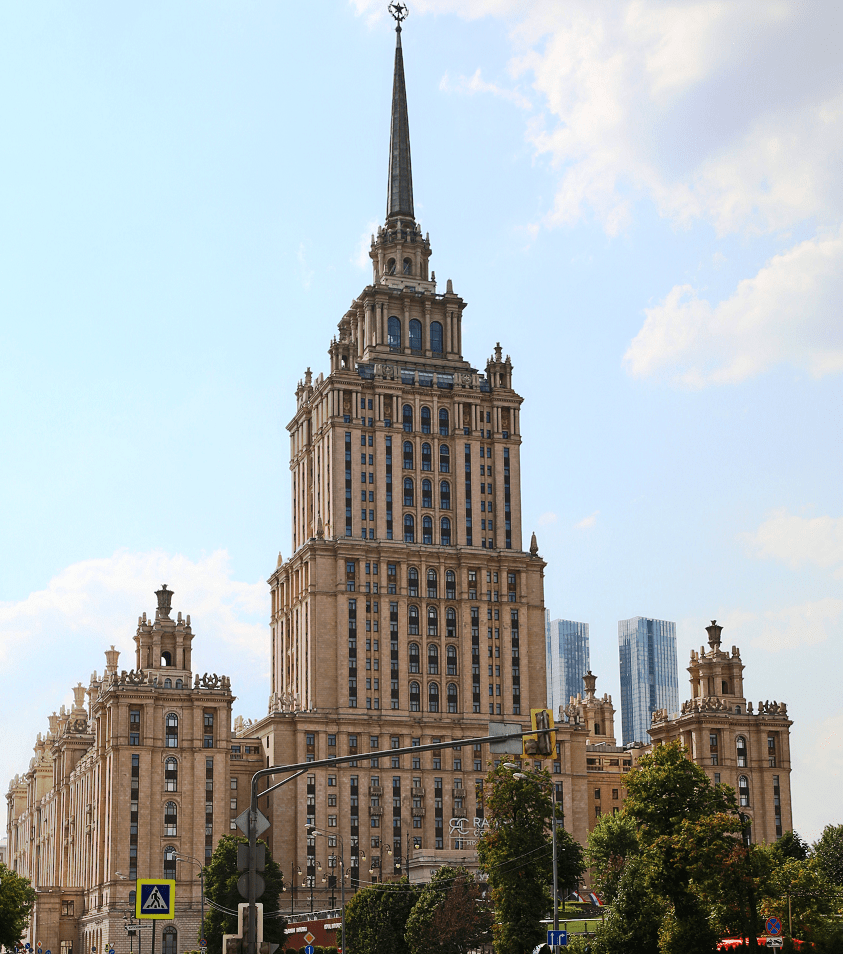 The Ukraina Hotel of the Radisson Collection net is a high-rise building, the seventh and last of the Stalinist skyscrapers built in Moscow on Kutuzovsky Prospekt in 1953-1957, designed by architects Arkady Mordvinov, Vyacheslav Oltarzhevsky and chief designer Pavel Krasilnikov.

Construction on the low river bank meant that the builders had to dig well below the water level. This was enabled by an ingenious water retention system, using a perimeter of needle pumps driven deep into the ground. 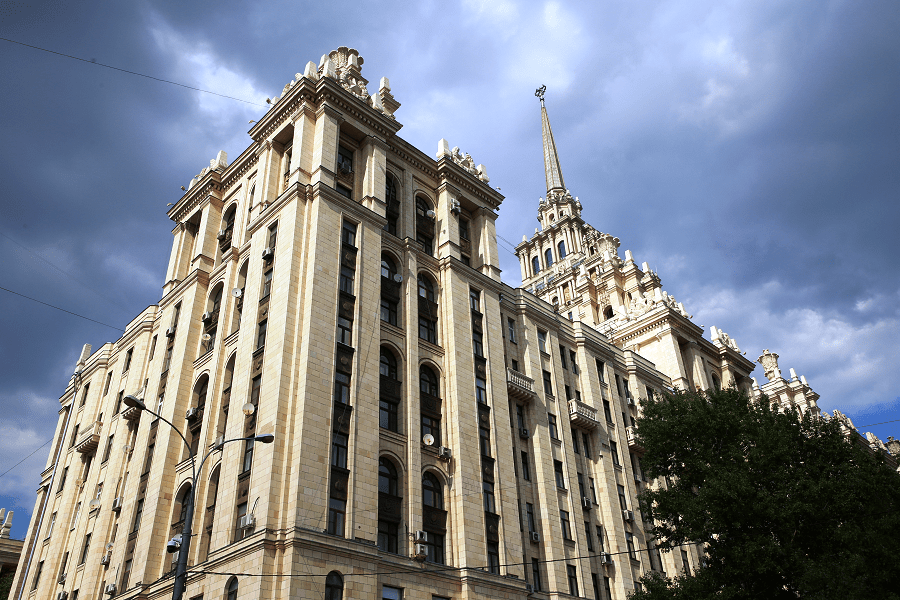 The building, made in the Stalinist Empire style, consists of three buildings. The central one consists of 34 floors, its height is 206 meters (including the 73-meter spire). It was the tallest hotel in the world from the time of its construction until the Westin Peachtree Plaza Hotel opened in Atlanta, Georgia, United States in 1976. 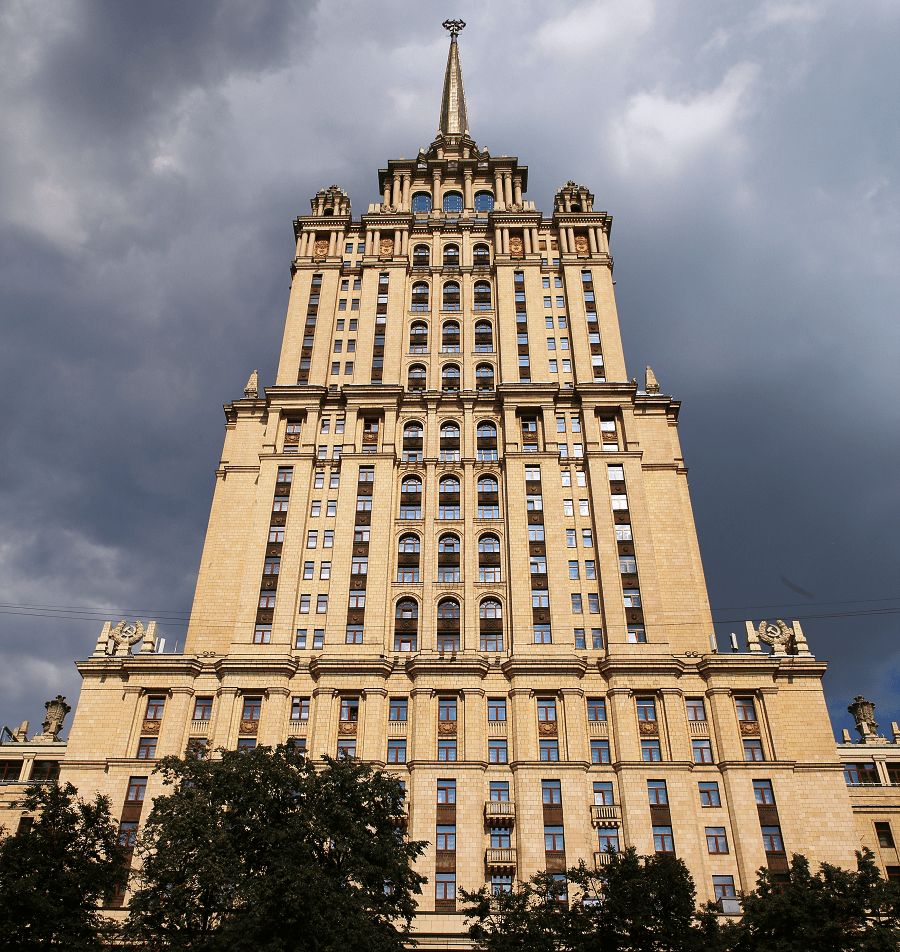 In the side buildings of the house there are 250 apartments, which, presumably, appeared on the orders of Nikita Khrushchev.

The building was privatized in 2005, from 2007 to 2010 it was reconstructed, after which the Radisson Royal, Moscow Hotel was opened – at that time the most prestigious in the city. 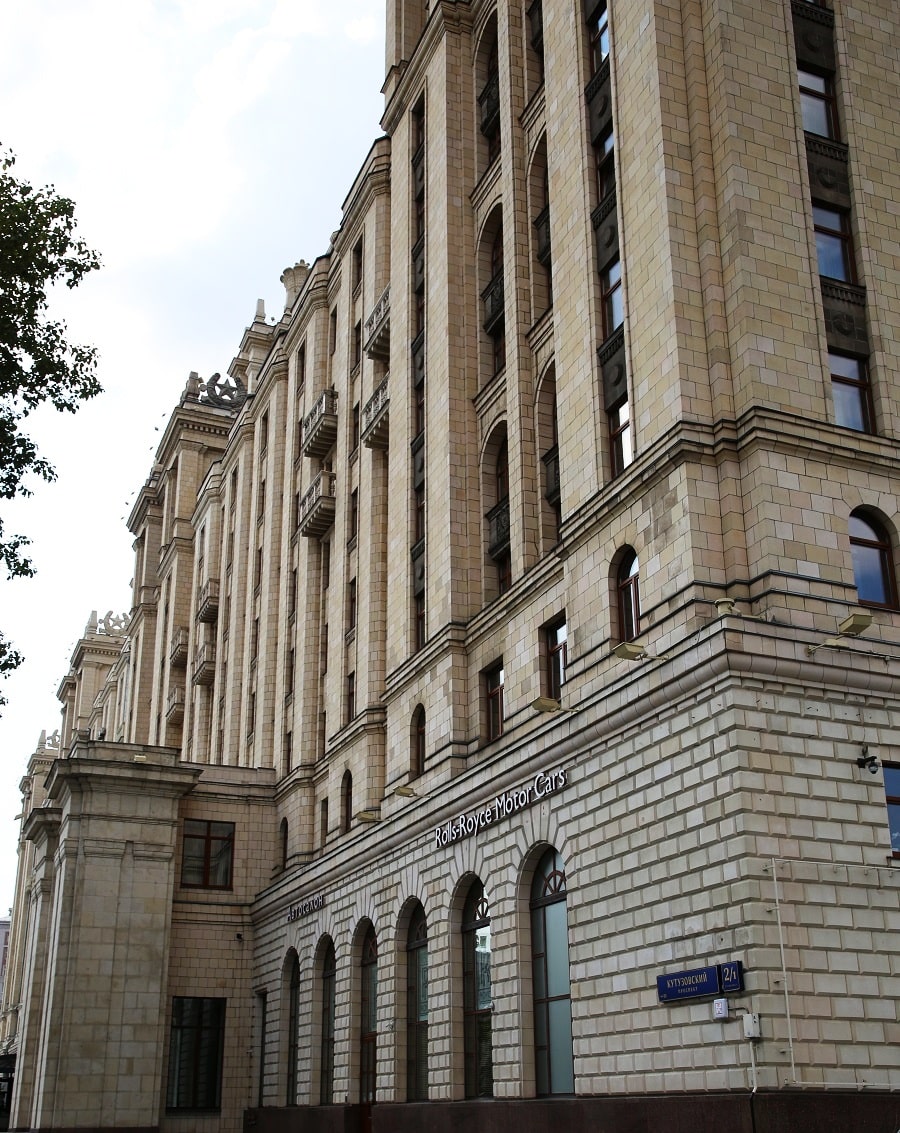 The hotel building operated a post office, a telegraph office, a savings bank and several shops – a bookstore, a flower shop and a theater shop. Since the opening of the hotel, there has been a closed cafe on the upper floors, around which an open terrace with a panoramic view of the city was arranged. The hotel employed 800 people.

The building had advanced engineering systems. In addition to the ventilation system, there was central air conditioning. The air from the street was filtered and humidified, its temperature reached 15 °C. The whole building was equipped with a centralized dust removal system. Through pipelines laid along the building, the dust got into the vacuum cleaner stations installed in the basement floors. The collected dust was filtered out and discharged into the sewer, and the purified air from the system entered the street. The hotel was additionally equipped with manual vacuum cleaners. Boilers were located in the basement to provide heating for the building. Also in the hotel building was arranged a telephone hub station for 10,000 numbers. 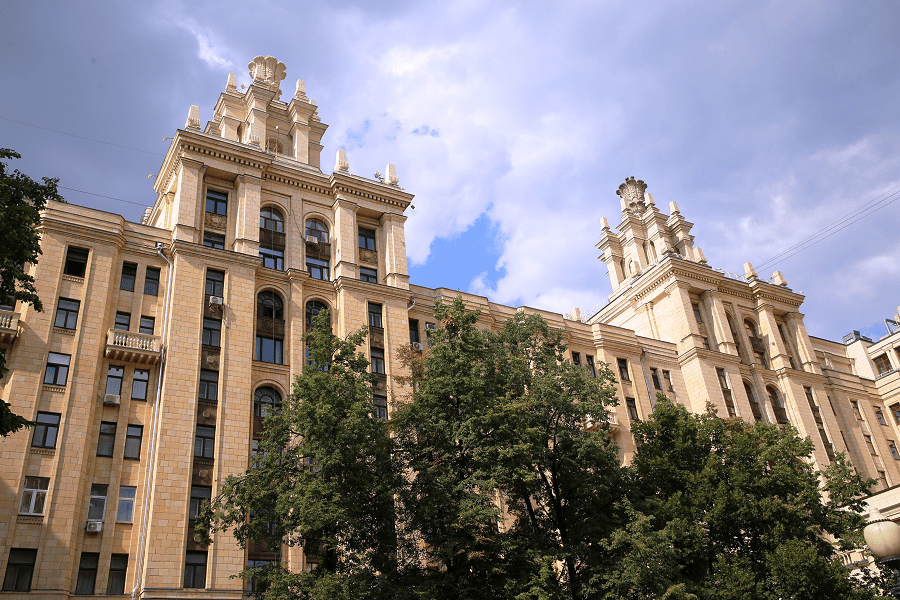 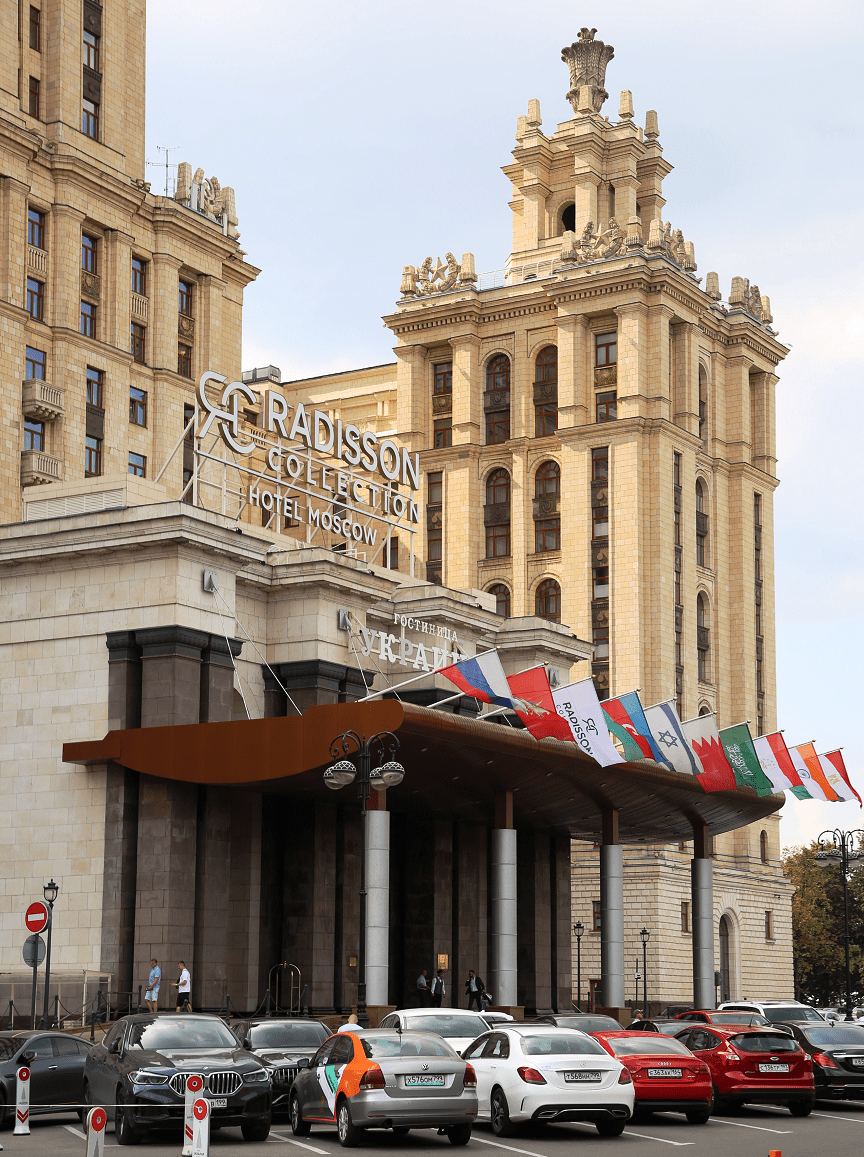 There are also about 1,200 original paintings by the most prominent Russian artists of the first half of the 20th century, and on the first floor the diorama Moscow – Capital of the USSR in 1:75 scale shows the historical centre of Moscow and the city’s surroundings from Luzjniki to Zemlyanoi Val in the year 1977, when the artwork was created. 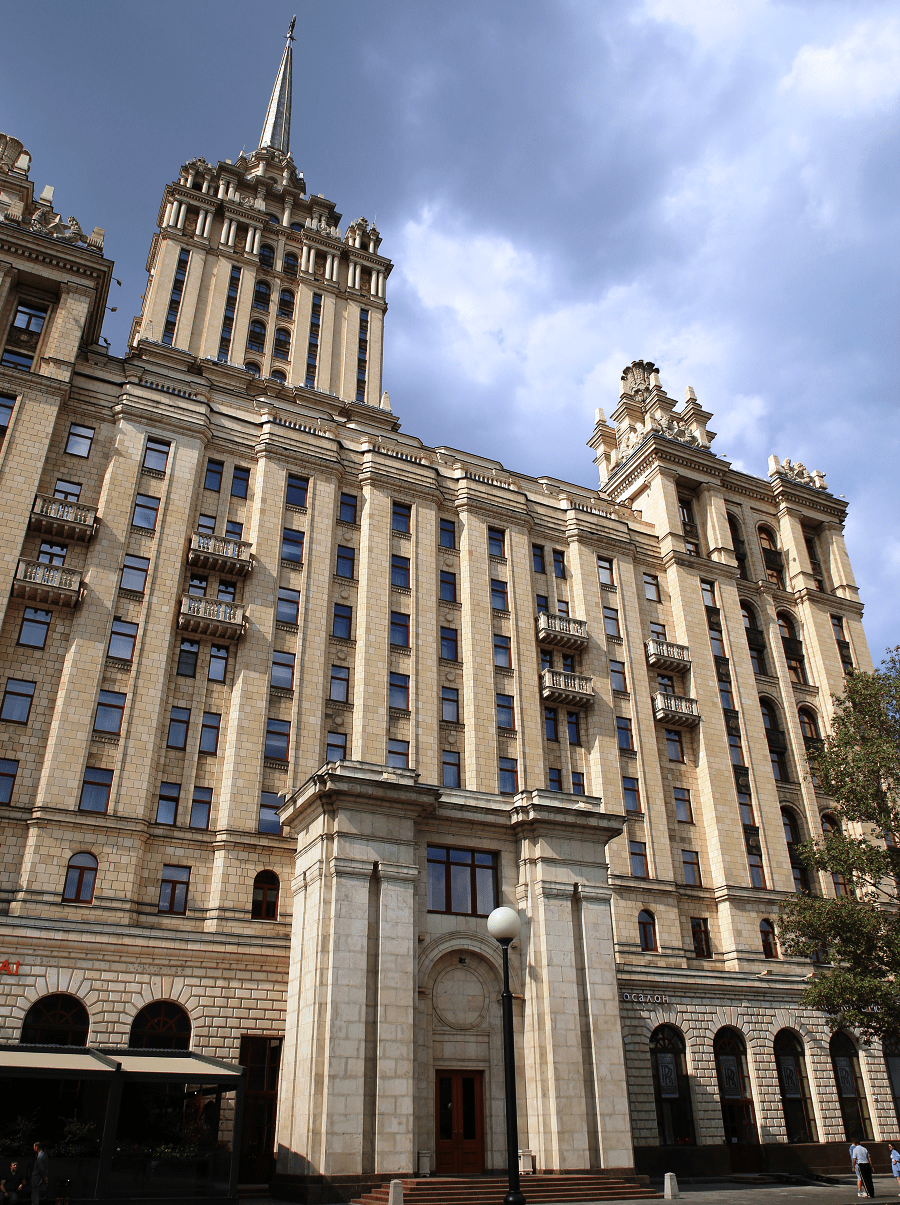