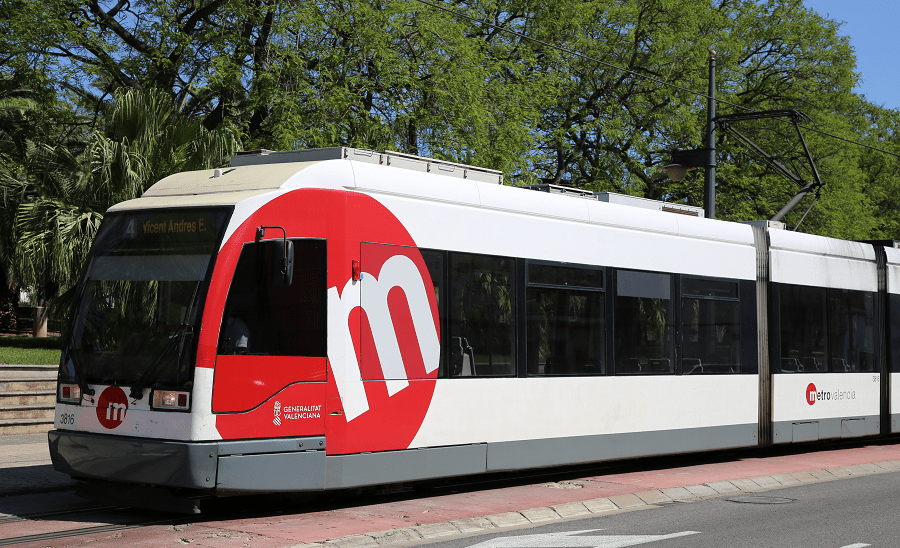 Article 7 of the Law on Traffic, Circulation and Road Safety approved by RDL 339/1990 attributes to the municipalities sufficient powers to allow, among others, the immobilization of vehicles, the management and control of traffic and the regulation of their uses.

The current network of Ferrocarriles de la Generalidad Valenciana in Valencia is heir to the old network of interurban railways in Valencia, popularly known as the Trenet de Valencia, which linked the capital with nearby towns. This narrow gauge network had been built for the most part during the end of the 19th century, and was managed successively by the Sociedad Valenciana de Tranvías, later by Compañía de Tranvías y Ferrocarriles de Valencia and finally by Ferrocarriles Españoles de Vía Narrow.

The modernization of the old network, during the years 1980s and its expansion and conversion into a modern metropolitan railway, have given rise to the Metrovalencia network which, after the changes in the numbering of the lines in 2015, has six metro lines and three surface tram lines:

Valencia has a network of urban and suburban buses. The Municipal Transport Company takes care of working from 3:00 am to 11:00 pm. After that, the night service starts, ending around 2:00 a.m. with the exception of Fridays, Saturdays and the eve of holidays.

During the summer period, from June 1 to August 31, the route of line 2 is modified, lines 20 and 23 are added to connect all areas of the city to the beaches. In addition to these lines, a number of special lines are usually also activated that work at certain times, for example, November 1, on the occasion of All Saints’ Day.

In Valencia, taxis are white with the Generalitat Valenciana logo and the “Area of Valencia” slogan on the driver’s door.

In the past, and until the 1980s, taxis were black with a yellow horizontal stripe and the arms of the city on the front door and the number of the license issued by the City Council.

The car park is renewed approximately every five years. The Department of Infrastructure and Transport, through the Valencia Mobility Agency (AVM), has been implementing an assistance program for the purchase of electric vehicles for the taxi service since 2005.

EuroVelo, a trans-European network of cycle routes, runs through Valencia (in particular the Mediterranean route EuroVelo 8). There are a total of three Trans-European Cycling Tourist Routes in Spain, covering over 3000 km of Spanish territory.

he MetroBus consortium is made up of a total of eight companies of coaches and buses (AUVACA, EDETANIA BUS, AVSA – Autos Vallduxense, FERNANBUS, BUÑOL, HERCA, URBETUR and ALSA) that operate the 58 lines that make up the MetroBus network. In addition to these regular lines, some of the companies that operate MetroBus also do occasional services with regular line buses.

In the city of Valencia there is also a bus station, which is located on Avenida Menéndez Pidal.

The city has five railway stations in its municipal area: Valencia-North, Valencia-Fuente de San Luis, Valencia-Cabañal and Valencia-San Isidro. The fifth is a provisional station for the new High Speed ​​line that connects the city with Madrid, Cuenca and Albacete. It is located on Calle San Vicente and is called Valencia Joaquín-Sorolla.

Finally, the High Speed ​​train (AVE) will cross the city through a three-way tunnel (two high-speed and one commuter), which will run under the large Germanías and Marqués del Turia tracks and will have two Interconnection stations for commuter trains, one of them on Avenida de Aragón and the other on the Tarongers Campus.

Currently Valencia has its own commuter nucleus, which is made up of six lines that link Valencia with Gandía, Mogente, Utiel, Chirivella, Caudiel and with Castellón de la Plana. In addition, four of the lines link Valencia with Madrid, Barcelona, ​​Albacete, Zaragoza, etc.

With the passage of the Airports Act in 1927, the establishment of an airport in Valencia was considered urgent, and a seaplane zone was created in the port of Valencia. Shortly thereafter, it was planned to establish an airport on land separating the Valencia lagoon from the sea, so that it could be used for both seaplanes and conventional ground aircrafts. However, this option was rejected and it was decided to build an airport at its current location, that is, in Manises.

The airport was opened in March 1933, and in 1934 it was equipped with a customs zone. On September 1 of the same year, the first regular flight between Madrid and Valencia was carried out.

Important improvement work is underway to accommodate the increased passenger traffic that has increased since 2001 thanks to tourism. In 2010, 4 934 268 passengers were registered at the airport, which is more than twice as many as in 2001.

In September 2008 the second expansion of the Manises Airport was presented (is located 8 km from the city of Valencia and is connected by bus, taxi and metro). This airport makes it possible to reach most of the Spanish territory, Europe and cities in North Africa. In addition, on June 6, 2009, flights began on a regular basis with the John F. Kennedy International Airport in New York, with four weekly flights.

The port of Valencia is the fourth busiest port in Europe, as well as the largest in Spain and the Mediterranean basin.

The port is also the main employer with over 15,000 employees and servicing over 7,500 ships per year. From here, deliveries are made to Italy, Turkey, Japan and the United States.