Today, cycling in Andorra is almost as popular as skiing, thinks one of the strongest Andorran cyclists Guy Diaz Grollier • All PYRENEES · France, Spain, Andorra 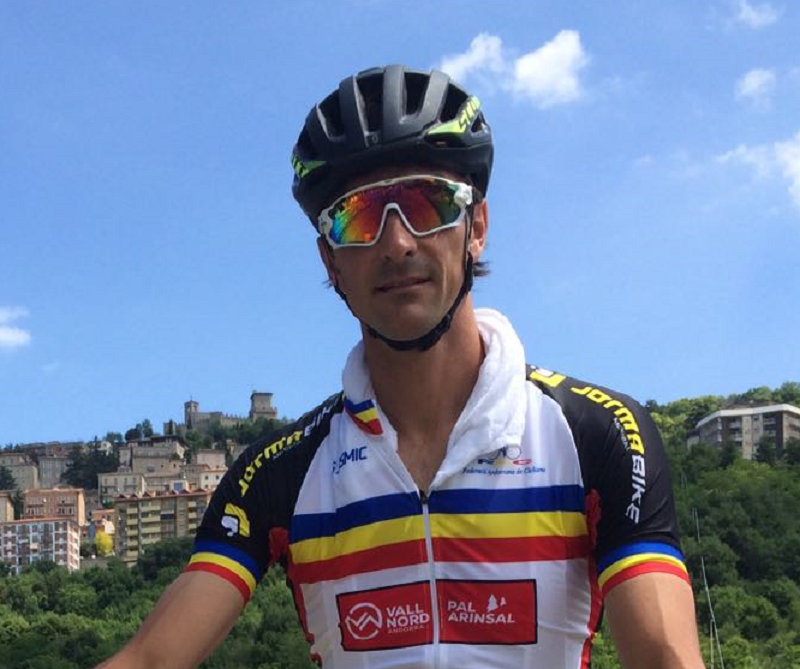 Cycling has been actively developing in Andorra for the last 10 years. The stages of famous competitions like the Tour de France and the Vuelta Ciclista España take place regularly in the principality, and Andorran cyclists often win medals at international competitions. Guy Diaz Grollier, one of the strongest Andorran cyclists for both disciplines – road racing and downhill mountain biking, (he works at the Andorran fire station, “Bombers d’Andorra”) and also bronze medalist of the XVII Games of the Small States of Europe 2017, told all-andorra.com about the trends in cycling development in Andorra:

“Today, cycling in Andorra is almost as popular as skiing. You can meet cyclists on almost all the roads and paths of Andorra. Here in Andorra, it is possible to train all year round. In winter, when the mountain passes are closed due to weather conditions, you can train in La Seu d’Urgell area where there is no snow.

The typical duration of a cyclist’s career is about 10-15 years. Here in Andorra, you can join one of two bike clubs from the age of five.

Mountain Biking has become known in the principality thanks to the bike parks in Vallnord and Soldeu, which host the World Championships in downhill and Maxi Avalanche. Road races in the principality have become increasingly popular due to the fact that Andorra hosted the stages of the Tour de France, la Vuelta Cyclista and other competitions for amateur cyclists, such as Purito (organised by the cycling club “Sprint club Andorra”) and “La Vuelta als port d’Andorra”  (organised by the second cycling club “Agrupacio Cyclista Andorrana” or ACA). And of course, thanks to the professional cyclists who love being here, the information is actively shared about these events through their social networks.

Currently, the Andorran government has no special financial programs to invite professional cyclists to the principality individually. However, the government plays an active role in the organization of all these sporting events. On top of this, Andorra’s excellent economic conditions from the point of view of taxation, as well as a high quality of life, including safety, ecology, nature, and, as I said, the climate, contribute to the attraction of professional cyclists, who live and train in Andorra. I know about 40 professional cyclists at international level, including: Cédric Gracia, mounting bike downhill champion (he’s French, but lives in Andorra), Purito (Joaquim Rodriguez) a Catalan, Carlos Verona from Spain, Svein Tuft a Canadian, Luis Leon Sanchez also from Spain, Jack Haig from Australia, as well as members of the Orica Greenedge and Movistar cycling teams. Professional cyclists who live in Andorra prefer to train on the newly asphalted roads leading up to the highest peaks, such as Gallina and Beixalis.

All professionals cyclists who are residents of Andorra must have a license from the Cycling club of Andorra. It costs more than 500 euros and is given by the Cycling Federation of Andorra.

Unfortunately, in such a small country like Andorra, there are no professional cyclists who are Andorran citizens. The smaller the country – the less opportunity there is to have an outstanding sportsman. And don’t forget that cycling is a sport with many different disciplines – there are a huge number of licenses and cyclists in the world!

I combine cycling with my main job at the Andorran firefighting station so I can train for 2-3 hours a day maximum and not every day. Professional cyclists train 4 hours minimum every day. I’m not a professional, I don’t have a high level, which can be seen here, in Andorra, for example, during the World Cup mountain bike this summer. However, we do our best to represent our country in the national competitions against Spain and Catalonia.

The budget of the Cycling Federation of Andorra to develop cycling in the principality is ridiculously low – I will not hide it. So you need lots of enthusiasm and have to be a real volunteer to “raise” young cyclists and educate them from an early age. Within the last 2-3 years, the ACA (Agrupacio Ciclista Andorrana) has created a team of cyclists and trains them from the age of 14/15 until they reach an elite level. We’ll see what happens.

In any case, the main objective is to develop cycling, promote it and to instill a love of this sport. And then this sport will stay with you for all your life!

So it’s not just a question of financing. But of course, we would have much more young road racers with a better level if we had a bigger budget. And the same for the downhill mountain bike – there are some strong young cyclists who come down very, very quickly! I hope that they will also be able to show good results in the coming years.

However, this year we managed to bring back medals for our country at the Games of the Small States of Europe 2017. There were 8 small States of Europe (Iceland, Andorra, Cyprus, Liechtenstein, Luxembourg, Malta, Monaco and San Marino). We were seven cyclists, men and women, we participated in competitions in three disciplines: mountain bike, road race and CLM (contre la montre).

The pressure at the Olympic games is always more exciting because you’re representing not yourself but your country. Luxembourg is always a very strong rival – this country has a lot of good cyclists. We got a silver medal in the team event and a bronze medal at the CLM. Unfortunately, David Albos could not get the gold because of mechanical damage to his bike. I got a bronze medal on a mountain bike. It was a great experience for all of us, who, despite a good level of training, can not participate in the big Olympic games due to very strict quotas and a limited number of participants. A mountain bike competition, for example, involves only the top 30 cyclists in the world.

But we hope that one day our cyclists will be able to participate in the Olympic games!