This year Vallnord Arcalis - Andorra was listed as one of the best mountain ski resorts suitable for freeride in the world, said Freeride World Tour General Manager Nocolas Hale-Woods • ALL ANDORRA 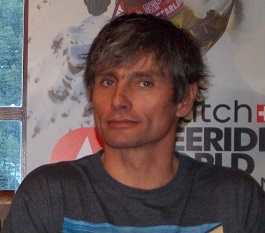 How long does Freeride World Tour exist? How popular is it in the world and for what extent?

I am one of two co-founders of FWT and I am responsible for all administrative questions, including negotiations with possible sponsors, advertising, broadcasting etc. The most important question in my list of responsibilities is safety. I test pistes by myself a day before competitions and control meteorological information – it’s the most important one for the athletes safety.

How long have you been involved in this business? Why have you decided to create FWT?

I’ve been involved in this business for 20 years. First of all it’s because of my passion for freeriding. I got my first freeriding experience with my grandmother – once, when I was about 10 years old, she took me outside of the slopes. It was in Switzerland where I was born. I really loved it! When I was about 18 years old my friend introduced me to snowboarding – at that time it was pretty new. A bit later I discovered surfing.

We created Swiss Surfing Association for fun. There I got my first sponsorship experience. We were called “Red Knives” as surfers and later this name was proposed for our snowboards. This idea worked pretty well: we got a budget and took a beautiful film in the mountains. We didn’t expect so many people to come and watch it. We thought it would be great to invite the best freeriders of the world and organise a competition to show the advantages of this type of sports to the big audience. It was evident how this sport was born 20 years ago and since then it has changed a lot. Now it´s not just a couple of freeriders. We have such a big brand as AUDI which is interested in communicating with freeriding values.

Why have you chosen Andorra as a place for organising one of 5 stages of FWT championship?

Traditionally we organise qualified events in Andorra. There are 60 qualification stages ahead 5 levels of championship competitions. We got very good feedbacks from freeriders who attended qualified events. We also had good technical support. So we were ready to advance: it was recommended by our community to place Vallnord Arcalis – Andorra at the top level on the world freeriding map. Andorra has very good mountains that are not well-known in the world. It´s a bit like a lost Eldorado. We know very good Andorran skiers such as Dani Fornell Prat – he joined FWT 2 years ago. He was selected to the list of the championship participants and his professional skills have no doubts.

Actually, Andorra has good mountains, good organisation and solid investments from the Andorran government. That´s why for the first time this year Andorra has become a place for one of freeride world championship stages. Contract between FWT and Vallnord has been signed for 3 years. So Andorra will be involved in FWT events for 2 more years.

What’s the budget of each stage? How much does it cost to Andorra’s government?

How could you explain what does it mean to be a freerider?

First of all, it means to have a good alpine and basic skiing technique. A lot of freeriders have an alpine racing background. One more quality is a love to be freedom and outside and move fast. They also need to be self-enterprise because there is not a lot of money in this sport. There is no federation, no team, no structure… They all are alone. So they not only have to train physically and mentally. They also have to find sponsors, organise their travel, thier´s own PR… It´s quite complicated.

They also need to have a creativity because they have to choose their line. The name of the discipline is freeride so it’s up to you which way to go. You start at the top and finish at the bottom and in the middle you do what you want to.

No, never! You have to inspect the mountain many times before the competition: where exactly you are going to jump or turn left or turn right… It´s important to visualise it mentally from the other side of the mountain.

Which age is required to stop a career of professional freerider?

Frameworks are very wild: you could be a world champion since 18 till 37 years old.

Are there any school of freeriding supported by FWT?

We have Freeride World Tour club in our structure and it collaborates with ski schools. There are such a kind of schools in Andorra (Grandvalira and Vallnord ski resorts) as well as in Austria, Switzerland… It’s like a franchise. We started to support this activities 2 years ago and now we have 20 schools in Europe.

Any plans to expand it?

Not yet. We have to do it good in Europe first and then to go outside.

In the list of athletes there are 60 men and women from all over the world, but there is only one Russian skier. Why? Is it so difficult to be selected?

Yes, it’s very difficult to be selected. Ivan Malakhovsky was qualified last year. Many things depends on judges. There is a panel of 5 judges who look for a quality of the line, control, fluidity, technical merit of jumping etc…

Do you expect a wild media coverage and to what extent?

This event is new, so it’s difficult to give you a precise number. In Verbier finally we had approx 100 accredited media. We have our own communication team which includes TV and video production. It’s a part of our budget and we control it professionally. We have 8 cameras (one of them is in a helicopter) and live broadcast system with 35 people working in the mountains. We also have a satelite dish and a signal is able to go to the world. Live webcast in Shamonix (the place where we had a first stage of the championship) there were 120 000 people watching competitions via computers.

You had the first stage in France, the second one in Austria, third one in Andorra…Where will the last two stages take place?

After Andorra we are going to Alaska. The competition will finish in Verbier, Switzerland, 28th of March. It’s going to be a big event with a lot of people.

What about Russia? Do you have any plans to organise FWT event in Sochi, for example?

We had been visiting Sochi since 2008 till 2011. Krasnaya poliana completely satisfies all our requirements. We also negotiated with Roza Hutor resort. But since 2012 our negotiations were suspended because of preparation works for the Olympic games-2014. We would like to resume them but the Sochi resorts official position now is like “there is no budget”. Anyway we are interested in further freeride extending and hope that our negotiations will be underway.