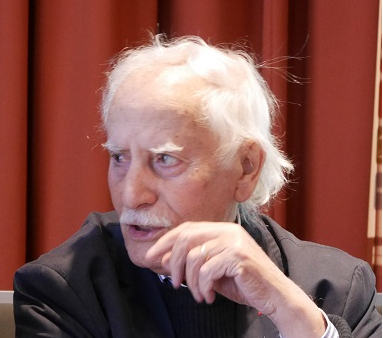 There was a presentation in Madrid on March 31st of the “Diaries of a Russian Spaniard” two-volume book by Ángel Gutiérrez, the theater director and actor who has lived in Russia for 40 years, and personally knew Andrei Tarkovsky, Peter Fomenko, Andrei Lobanov, Oleg Efremov, Vladimir Vysotsky….

Returning to his homeland in Spain, he founded the theater named after Chekhov in Madrid that is the only theater outside the Russian borders, where he produces Russian plays to this day with great success. Angel Gutierrez told All Andorra about his vision of the modern theater on the day of his book presentation:

Having left Russia, do you still follow its theatrical life? How do you think the modern Russian theater is today?

Yes, I continue to follow the theatrical life of Russia. Unfortunately, what happens with contemporary Russian directing is painful to me. I do not understand and do not accept modern interpretations of Russian classics, their conjectures, and distorted meanings. I would not like to give specific names, but I would not even allow some so-called modern directors to go on stage.

Which modern actors do you think are talented?

You were a student of GITIS (Russian Institute of Theatre Arts). What is the main lesson you learned whilst you were there?

My studies at GITIS were the best years of my life. I was young and happy. So happy to float literally in the air … GITIS taught me to wake the spectators’ souls, to penetrate to the very bottom of the material.

Do you think you woke up many souls?

I have received and still receive letters from spectators. They thank me. They want to do well. Help other people. Become better. Spaniards who do not read Chekhov, Pushkin, Dostoevsky, Gorky, Arbuzov come to me in the theater here in Madrid.

After seeing only one performance, they become admirers of Russian literature forever. They try not to miss any of my productions from that moment on. I think that I returned to Spain for this probably, to show the full depth of Russian drama, to teach the Spanish audience to feel, love, and live through it.

Is the Spanish spectator very different from the Russian one?

Yes, they are different. The Russian spectator is smart and educated, the Spanish spectator is superficial, but learns quickly. I often watched my audience during the performance. They sit without stirring. Like in a temple …

Was it difficult to open the theater named after the Russian playwright outside Russia?

Yes, it was difficult. I had to fight. I am the person who is ready to die to defend his idea. I’m ready to die during each repetition.

I began to teach acting technique at the Royal High School of Dramatic Art in Madrid. Many famous Spanish actors such as Eduardo Noriega, Maria Luis Martin, Javier Gutierrez, Carlos Iglesias, and Felix Cubero became my students. Then came the chamber theater studio named after Chekhov where I began to teach real theater to the Spanish public.

Do you consider yourself as a tough and strong-willed person?

Yes, when it is necessary. Generally, I am a shepherd; I love silence and loneliness. And purity. I like to play the guitar and sing. I sang in all the films in which I starred; and these are “Salute, Maria”, and “The Places are Quiet”, and “Bad Good Man”.

Please tell us about Vladimir Vysotsky, how do you know him? How did you meet him?

I met him when I was a young director at the Romen Theater and staged Carmen, a performance that went on for 10 years with great success. I heard some rustling behind the scenes during the repetition. It was Volodya, he came without permission, and was hiding. He asked timidly if he could stay. I allowed him to. It turned out later that he came not so much to me as to my gypsies, to learn to play the guitar. Rom-Lebedev and Poliakov were his teachers. That was our first meeting.

I saw his graduation work, his performance at the Moscow Art Theater Studio. He played the Kleshchrole from “At the bottom” by Gorky. He played perfectly, according to Stanislavsky, thoroughly and truthfully. Since we became friends, he continued to come to the theater, and we proceeded to meet in the company of Andrei Tarkovsky and Artur Makarov, whom Sergei Gerasimov adopted. Such a daily, Tarkovsky, Vysotsky, Arthur Makarov, Lev Kocheryan, often gathered at Kocheryan flat in the house on Bolshaya Karetnaya. Then they met in other apartments and visited my small room in a huge communal apartment on Bolshaya Molchanovka.

I can say that Vysotsky’s fate would be different without me. I introduced him to Marina Vlady. Why did I do that? I do not like Marina. I don’t like her beauty. Arrogant, French, “witch” …Volodya burned out because of her.

Which Russian directors and actors inspired you?

Andrei Tarkovsky, of course. Inimitable genius. I am proud that we worked together. I starred in his “Mirror” and even gave him one episode as a director.

Among actors, there was Leonid Filatov, a saint, and a great man. Clever, subtle, modest. A man of honor. A genuine Russian intellectual.

Do you often visit Russia?

I do not lose touch with my second home. I will hold a master class in Melikhovo, in the homeland of Chekhov, this summer.

There are similar plans for Moscow too.

What are you dreaming about?

I want to share not only my memories of those great and brilliant people with whom fate brought me to in Russia but photos also. So that everyone can see them. Unfortunately, they are not included in this edition.

There will be the diaries reprinted for my 85th anniversary on August 28th.