The real estate market in Tarascon-sur-Ariège is attractive: a decent house with a garden can be bought for €150,000 to €250,000, said the mayor Alan Sutra • All PYRENEES · France, Spain, Andorra 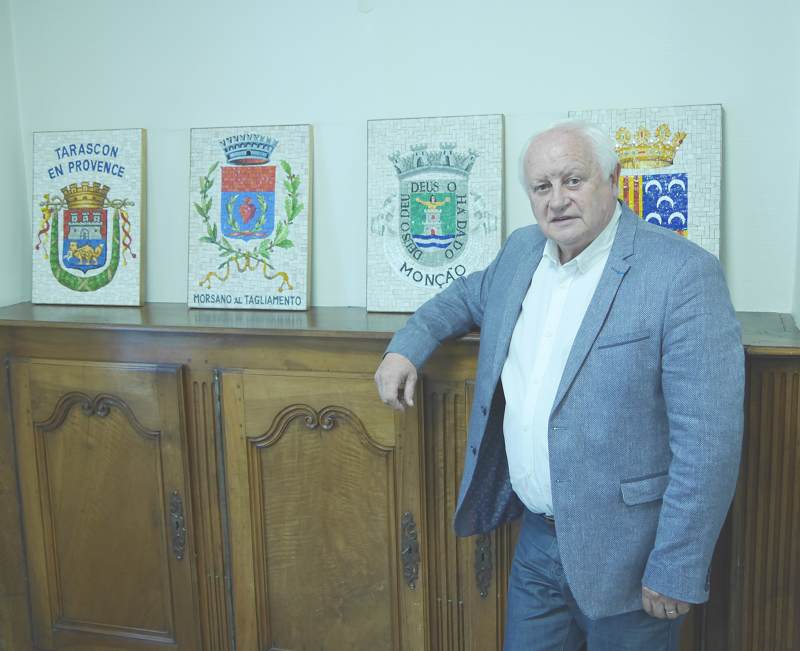 Alain Sutra, a former French language teacher for foreigners, has been Mayor of Tarascon-sur-Ariège since 2001. Over the years, he managed to do a lot to create a tourist image of the city. However, much remains to be done. He shared his plans with all-andorra.com.

What is your city interesting for?

Historians believe that Tarascon-sur-Ariège is one of the world capitals. Why? Because around the city there is the largest number of cave zones in the world. The most famous cave is Niaux Cave. But there are hundreds of others that are closed to visitors. The presence of caves proves that millions of years ago people lived here, many people.

Next to Tarascon, we built a Prehistoric park that tells the story of our region to children in a playful way. This is a park with practical exercises, creative workshops. In winter, it is closed. Nevertheless, about 60,000 people—children and adults visit it annually.

There is another historical fact related to our city, which I would like to talk about. At the entrance to the city hall of our city you can see a large red-white-blue panel. This is a genuine document that is unique in France. During the restoration of the Church of Our Lady of Daurada in Tarascon (Notre Dame de la Daurade à Tarascon), workers found that earlier its walls were glued with red-white-blue paper. These are revolutionary colours that prove that during the French Revolution the church turned into the so-called Secular Temple.

The revolutionaries decided that it was necessary to combat Catholicism as the predominant religion. Church property was confiscated, and church walls were decorated with red, white, and blue paper. This is an exceptional document!

Is it true that there were iron mines in Tarascon?

Yes, in the past, XX century, Tarascon was the land of iron and aluminium. There used to be three iron deposits: Merik, Tarascon and Olat. The construction of dams and the creation of a hydroelectric power station made it possible to generate cheap electricity. This has contributed to the production of high quality aluminium. Millions of tons of refined aluminium were used, which was used in aeronautics.

Throughout the past century, Tarascon has experienced times of prosperity of wealth.

The exploitation of iron mines and the production of aluminium have caused consistent immigration. After the October Revolution, Italians, Spaniards, Moroccans, even Russian White Guards emigrated to Tarascon.

There was a lot of work, but not enough men. To ensure there were enough workers, whole villages were exported from Portugal. Therefore, in Tarascon, there is still a strong Portuguese diaspora.

All this has made our city cosmopolitan, mixed generations live here and now. And it gives dynamics to our city.
At that time, there were 15,000 inhabitants in our city.

But in the end, iron development was almost over. Olat was closed, Merkus was partially closed, and Tarascon greatly reduced staff. People began to leave the city.

How many people live in the city now?

About 3,400 to 3,500 inhabitants. But the entire infrastructure remained: two stadiums, two gyms, tennis courts, an indoor pool, a kindergarten, college, schools, a youth centre, a cultural centre … But we do not have the money to serve all this as before.

Are there any industrial enterprises in the city?

How can you attract tourists to Tarascon?

Tarascon used to be an industrial city that had nothing to do with tourism. When we were faced with a sad reality and were forced to suspend the mining and production of aluminum, we decided to change the image of the city. As you know, to get to Toulouse from Andorra or the Catalan regions such as Alt Urgell, you need to drive through Tarascon. And, on the contrary, to get from Toulouse to Andorra, to ski or go further to Spain, you need to pass by Tarascon. This is a strategic place. About 18,000 cars drive through Tarascon every day!

Our city is located at an altitude of 460 m. We have our own microclimate. Winters are relatively short and not cold; summers are hot. The nature here is beautiful and there are many places for hiking.

Near our town there is a ski resort called Beuil—you can cross-country ski here. There are currently no hotels here—just a ski station.

On the outskirts of the city there is a camping area—here you can settle in a bungalow. Every year we can host around 1,000 people from May to October. And this is almost 27% of our population.

We also have a three-star residence with a good restaurant. There is also a three-star hotel in the city centre, but it is three stars by the French standard: really good quality at the right price.

We recently demolished old buildings and built gardens in their place.

What cultural and sporting events take place in the city?

Cultural events take place here year-round. They are promoted by cultural and sports associations—and there are more than 60 of them.

In combination, I am the president of the International Folklore Association. Every year we welcome 15-20 professional dance groups to participate in the Latin festival. It runs from June to September. This festival is free and attracts many Latin dance lovers from Europe, Latin America, Africa.

Every year we have a fair—this is the ‘ascent’ of animals for the summer period on high mountain pastures in May and the descent on September 30. This is a big event with around 10,000 visitors. The holiday lasts two to three days, and this is a rather interesting event for tourists.

On the sports side—this is, first of all, Ariégeoise. This competition is for cyclists of the highest level.

In addition, we have two football teams in Tarascon, there is a rugby team. Judo, boxing, volleyball are also very popular here.

Does Tarascon have relations with Andorra in the fields of culture, sports, business or tourism?

Not much. There is a connection between our church in Tarascon and the Meritxell church. I once presided over a meeting with Andorran’s bishop, Bishop of Urgell, here in Tarascon. I know the former Prime Minister of Andorra, Mr. Pintat, and his wife is French. They came to Tarascon a few times, and we became friends.

In addition, my grandmother was an Andorran. My cousin lives in Andorra, and I meet him from time to time. I love Andorra, and I have known it for the last 60 years. It is a cute little country with a beautiful culture. I like all the small cities in Andorra, except for Pas de la Casa. And I really would like our city to cooperate more with Andorra.

Unfortunately, today Andorra is often associated with a place where you can buy cheap tobacco or alcohol. But this country wants to partially enter the EU and change its image. I know that Andorra is actively promoting the use of electric vehicles. So that our friends from Andorra can travel freely in France and visit us more often, we want to open several points for charging electric vehicles.

The neighbouring city of Ax-les-Thermes is Andorra’s competitor in terms of attracting skiers. We do not have ski resorts. Tarascon is a partner of Andorra.

How much land in Tarascon for sale? What investment projects may interest the city?

We have little land for sale. At the same time, it is important for us to continue to work on the development of the tourism sector. We need to build hotels; we need good restaurants. I am negotiating with McDonald’s, I think it would be interesting for our tourists, because fast food is always in demand.

What is the city budget?

How attractive is the real estate market in Tarascon?

The real estate market here is very attractive. A very decent house with a garden can be bought for 150-250 thousand euros. Tarascon is a very safe city, and this is also a big plus.

What else would you like to do for the city as a mayor, besides the development of tourism?

We would like to preserve the population of Tarascon. To do this, we have improved our social services. We have created a new kindergarten, a public services house that supports and helps people who have difficulties. We have a club for the elderly.

Our social policy is strong. Our school and college are completely free. Children should not even buy pens. School transport is also free.

Every 15 days on a Wednesday (on this day, children in all French schools finish studying at 12.00) we arrange a lunch at the school canteen—it costs only €6. This is a great reason to leave home, to dress beautifully, to do a hairstyle … And this is not only for older people. We are glad to everyone!

In the NFT world, artists work together to promote each other’s art, said Aimee del Valle, a British artist living in France.