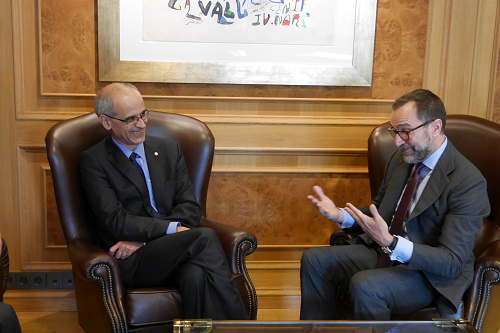 The Prime Minister of Andorra Antoni Marti met with the US Ambassador is Spain and Andorra James Costos. The parties expressed the satisfaction with the current relations between the two countries.

During the visit, the parties discussed the acquisition of the American company JC Flowers of bank’s assets of Vallbanc, whick took place after the finishing of the process of the restructuring of Banca Privada d’Andorra. The US Ambassador spoke on the further development of business relations of Andorra with companies of the United States. In particular, the visit of James Costos, who was accompanied by U.S. Consul General Marcos C. Mandojana was scheduled by the opening in Andorra of the first Starbucks cafe.

The Ambassador and the Consul General also met with the minister of foreign affairs of Andorra Gilbert Saboya, minister of tourism and trade of Andorra Francesc Camp and the state Secretary of the government of Andorra on issues of economic development Josep Maria Missé. The parties discussed the progress of cooperation of Andorra with MIT  (Massachusetts Institute of Technology) in the areas of innovative projects.