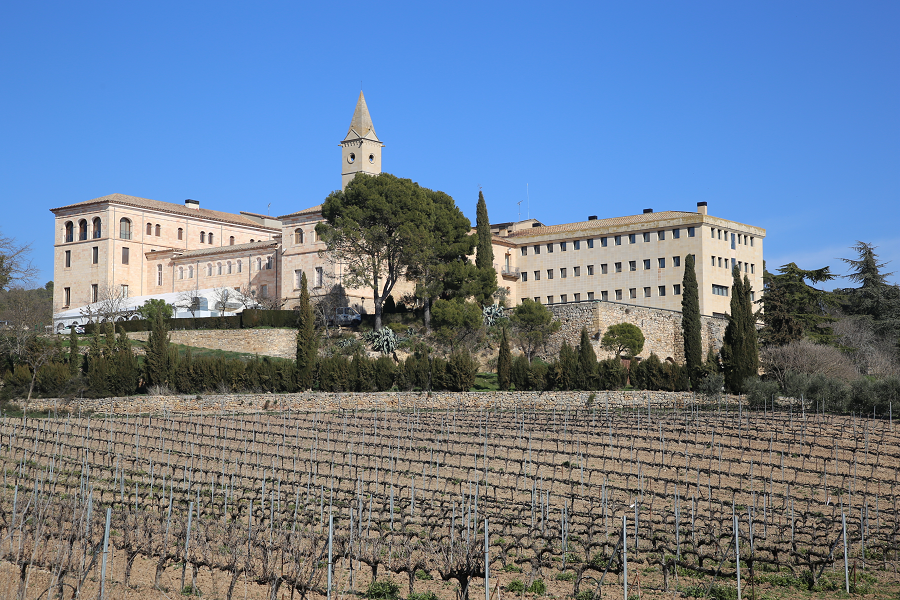 The monastery of Santa Maria de Bellpuig de les Avellanes (cat. El monestir de Santa Maria de Bellpuig de les Avellanes) is an old abbey of canons ruled by the order of Saint Augustine. It is in the municipality of Os de Balaguer, in the region of La Noguera, Pyrenees, Catalonia, Spain. It was declared a historic and artistic monument in 1931. The monastery houses an archive of a historian and collector Josep Maria Gavín i Barceló.

The monastery was founded through a union of two communities. On one hand, the one of the Premonstratensians of the monastery of Santa Maria de Bellpuig Vell, introduced by the hermit Joan d’Organyà around 1159, they turned into premonstratensians when fusing their hermitages, in 1166. On the other hand thanks to the generosity from the counts of Urgell, Ermengol VII and his wife Dolça de Foix, with the community established by Guillem d’Anglesola, also in 1166, in Bellpuig de les Avellanes (Noguera). Together they gave rise to the creation of the great abbey of Bellpuig de les Avellanes. 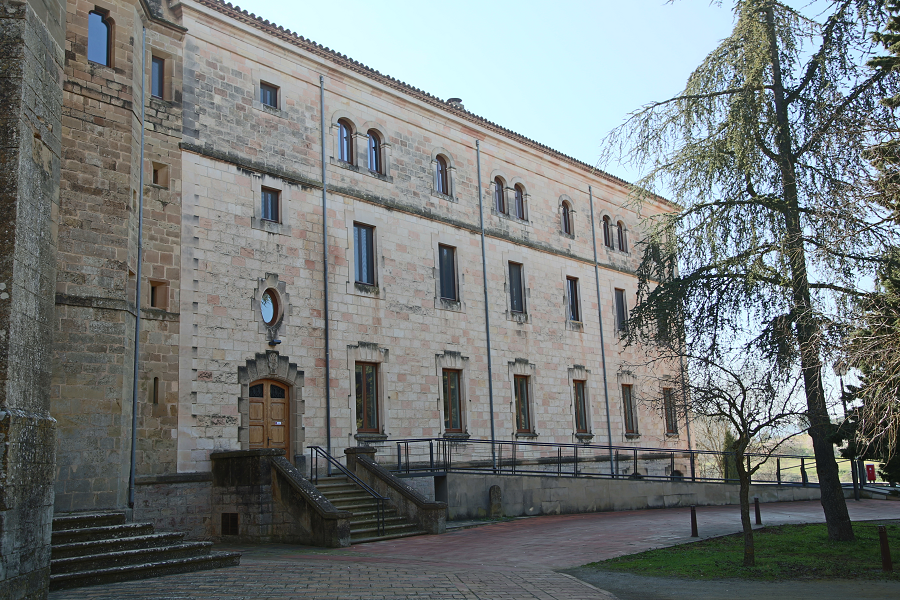 In 1180, when Joan d’Organyà died, the two communities merged. The site of Bellpuig Vell was abandoned around 1195. Bellpuig de les Avellanes became the most important premonstratensian community in Catalonia, it gave rise to the creation of: the sanctuary of Mare de Déu de Bonrepòs (1205-1224) in Pallars Jussà; abbey and hospital of Sant Nicolau de Fondarella, (1229-1340) in El Segrià, near Anglesola; monastery of Santa Maria de Mur (1235) in Pallars Jussà, (that returned to pabordia augustiniana after a long controversy), and Santa Maria d’Artà or Bellpuig d’Artà in eastern Mallorca. It always had the protection of the counts of Urgell and withheld important possessions that extended throughout the region to the Montsec mountain range. In 1195, it was under the protection of King Alfonso I, who honored it with several privileges and donations. 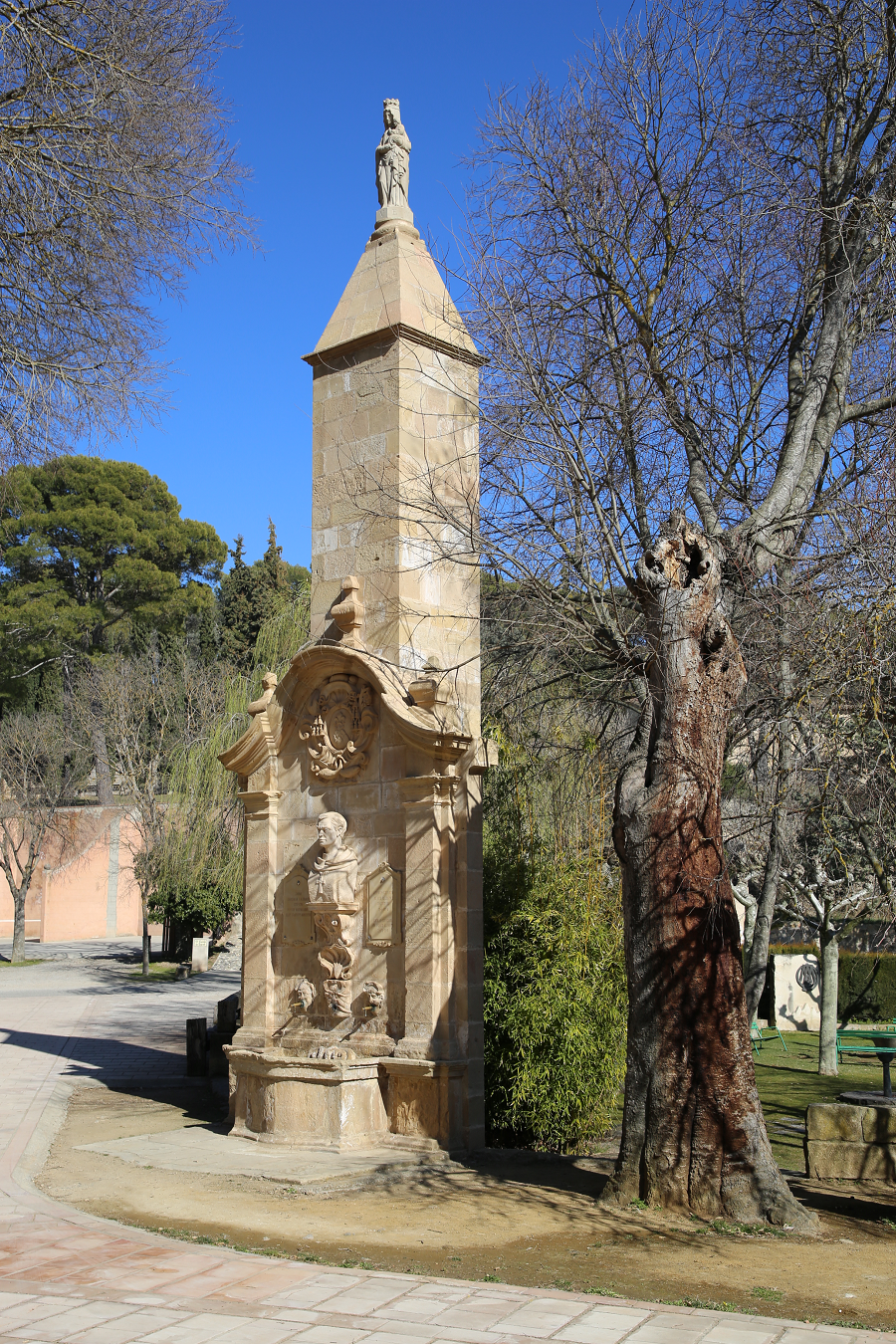 From the middle of the 18th century, an effort to recover historical and ecclesiastical documents began in the monastery. Three of its abbots wrote important studies on Catalan churches and monasteries: Jaume Caresmar (who died in 1791), Jaume Pasqual (died in 1804) and Josep Martí (died in 1806). Among the works that came out from Bellpuig, we can highlight the Monumenta Cataloniae, which is conserved in the Biblioteca de Catalunya. Bellpuig de les Avellanes was one of the main centers of the Catalan Enlightenment. 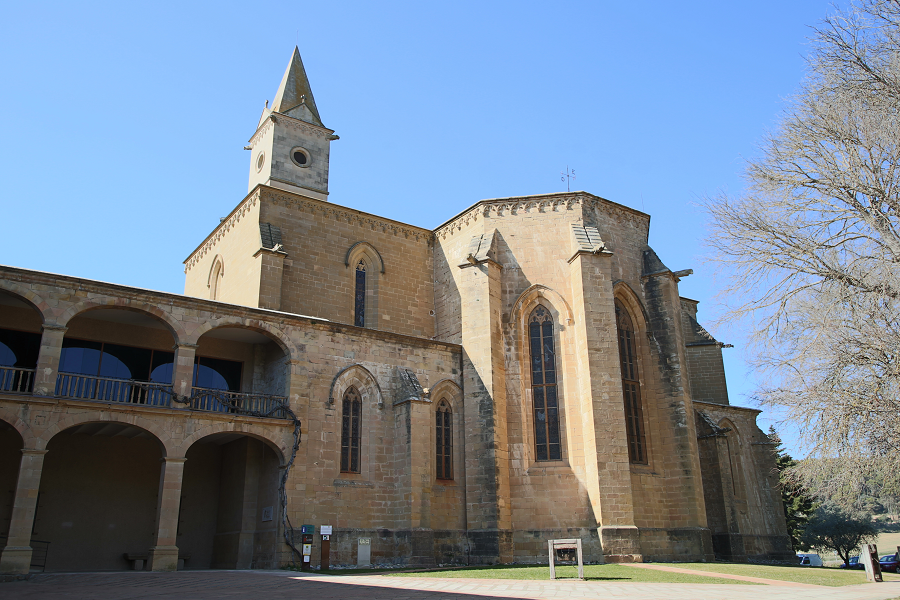 The activity in the monastery ended with the confiscation of 1835. Since that date, the monastery has gone through several uses. Between 1883 and 1889, it became a trappists monastery. In 1894, Agustí Santesmasses, a banker, acquired the building. Santesmasses sold the sarcophagus with the remains of the counts of Urgell to the The Cloisters Museum in New York. The sale price was 15,000 pesetas. The remains of the counts were returned in 1967 within simple stone tombs.

In 1910, a community of Marist Brothers settled in Bellpuig, who had lost their novitiate in the Tragic Week, and they took charge of the restoration of the building. In the community there is the tomb with the recovered remains of the 46 marist martyrs of Montcada, murdered in 1936 at the cemetery of Montcada i Reixac. 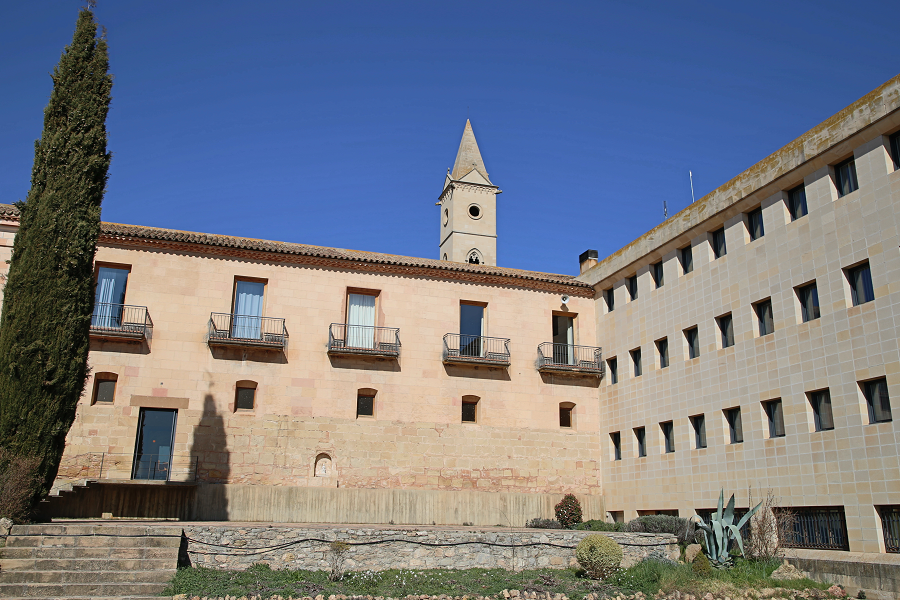 Since 1994, it has ceased to be a seminar and currently it is a rural accommodation.

In the year 2006, around the temple of Vilanova de la Sal, some trunks were found with the documentation of the monastery of the period between 1166 and 1834, which is thought to have been saved from the Mendizábal confiscation.

The church of Bellpuig began to be reconstructed in the 14th century in Gothic style. It was designed as a large basilica with a Latin cross floor plan. The central nave was shortened and the dimensions of the church were reduced. 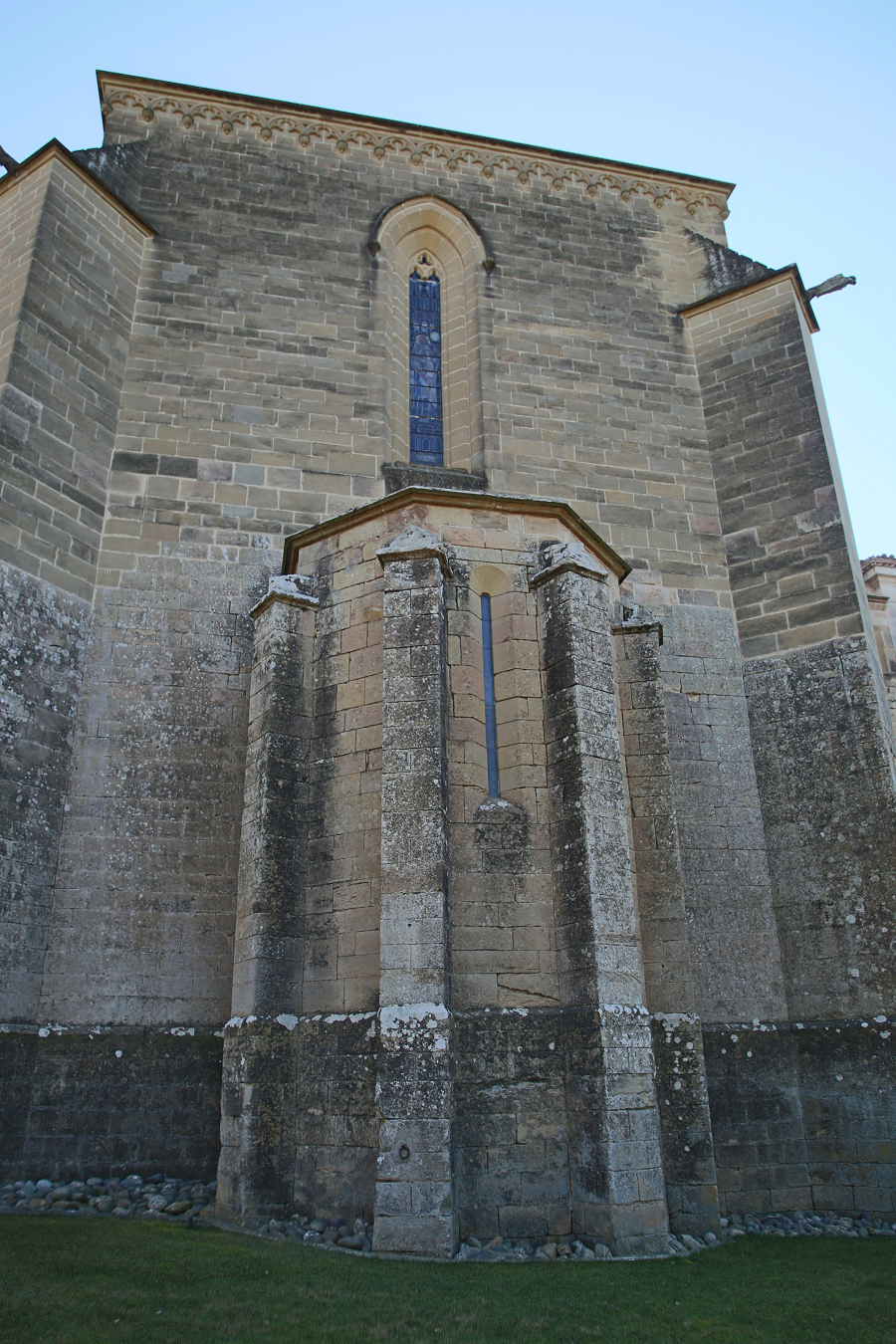 It has a central apse in a pentagonal shape and two smaller apses, one on each side of the nave. The original ceiling was made in wood with an ogival vault. The entrance portal is located in the northern arm of the transept, it is in a Gothic style with columns finished with capitals. It is also decorated with the shields of the counts of Urgell and the monastery, as well as a shield that is believed to correspond to the abbot.

There is also a Romanesque style cloister adjoined to the south-west angle of the church, built in the 12th century. It has a rectangular floor plan, the northern and southern galleries (the shortest ones) are divided into two sections by a central pillar and have four semi-circular arches on each side, supported by double columns. The longest galleries are divided into three parts by two pillars, in the central section, there are five semi-circular arches and three arches on the sides, all of which are supported by pairs of columns. All the arches are decorated with moldings of diamond tips. It has thirty-six decorated capitals, in the south and west galleries, in the other galleries the capitals are not decorated. The ornamental motifs are flat and they represent vegetal elements, figures of animals and humans. 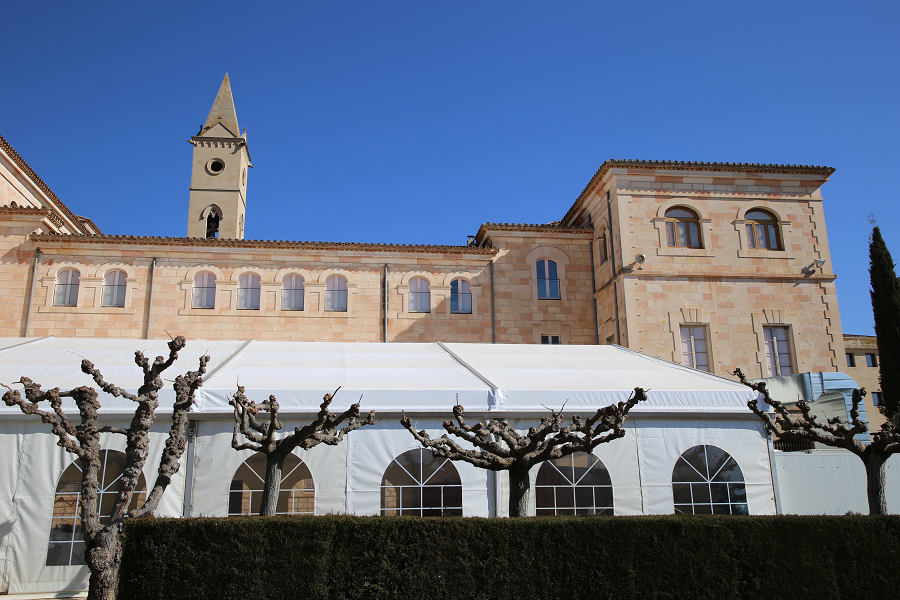 Mausoleum of the counts of Urgell

Count Ermengol VII, who started the foundation of the monastery, wrote in his will, in 1177, that he wanted to be buried in the church of the Monastery of Santa Maria de Bellpuig de les Avellanes.

‘In the church of Santa Maria de Bellpuig, which I founded by divine inspiration (…), and besides, my body to be buried there by the humility and poverty of this place (…)’ 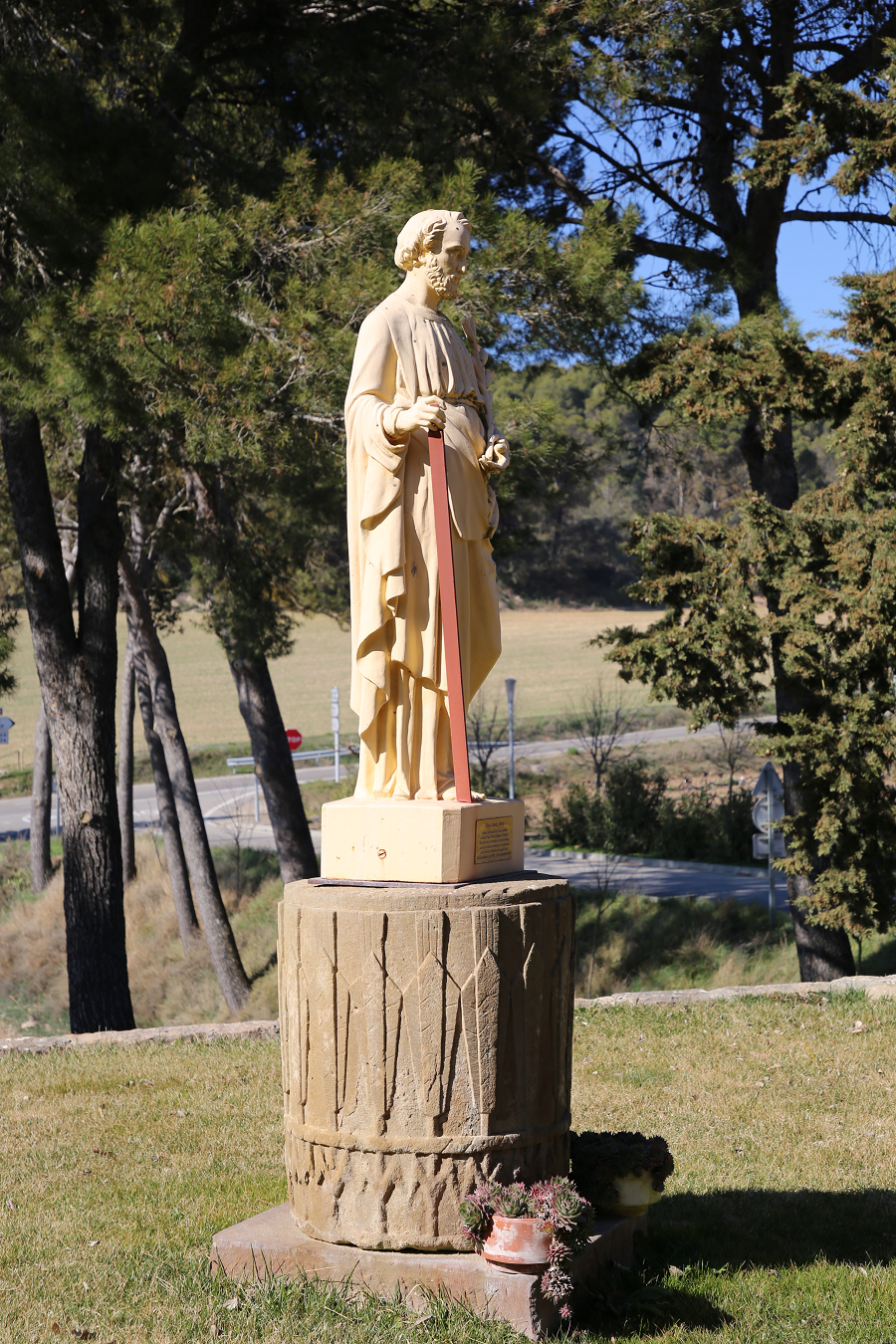 Ermengol X initiated the reform of the building in 1303, in order to turn it into the mausoleum of the counts of Urgell. He was the one who built tombs for the founders of the monastery. At the same time, his brother Àlvar de Cabrera, viscount of Àger, was buried there. He also built his own tomb, where he was eventually buried. In 1314, he wrote in his will:

‘I choose for my body, the tomb built in the church of Santa Maria, the Monastery of Bellpuig, of the order; for my grave (…)’

From the 14th century until the beginning of the 20th century, these tombs were preserved in the church of the monastery.

In 1906, the monastery was purchased by Agustí Santesmasses i Pujol, the banker from Lleida. The same year, he sold the tombs of the counts of Urgell to an antique dealer of Vitoria, for fifteen thousand pesetas. 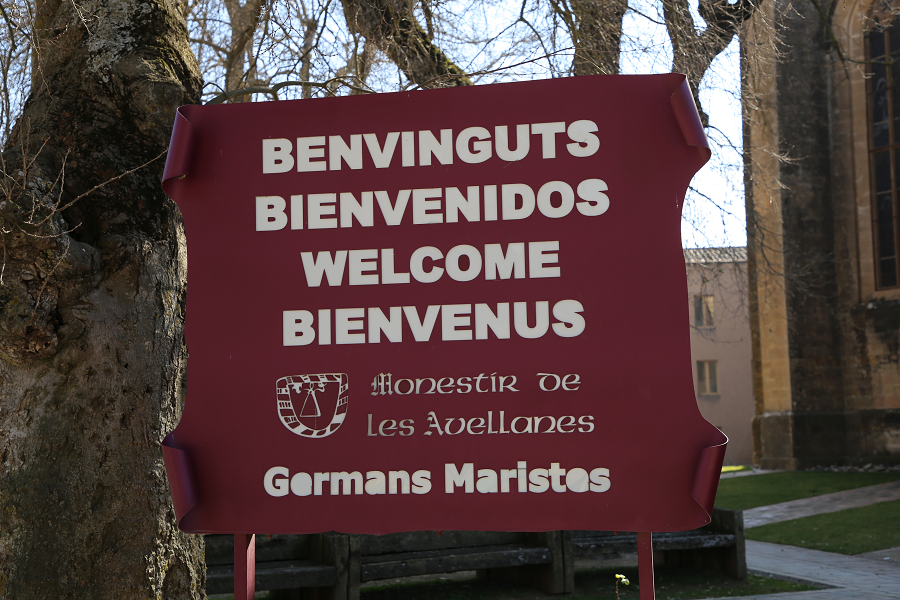 The events echoed through the press at the time, especially in the first moments. The bishop of Urgell demanded the return of the tombs, since he was their legitimate owner. Even Francesc Macià, in 1907, as a member of the Republican Courts, made several movements in order to recover the tombs.

The initial echo that the news created eventually died off and finally the tombs were not recovered. They were bought by the United States of America, and are currently located in The Cloisters Museum in New York.