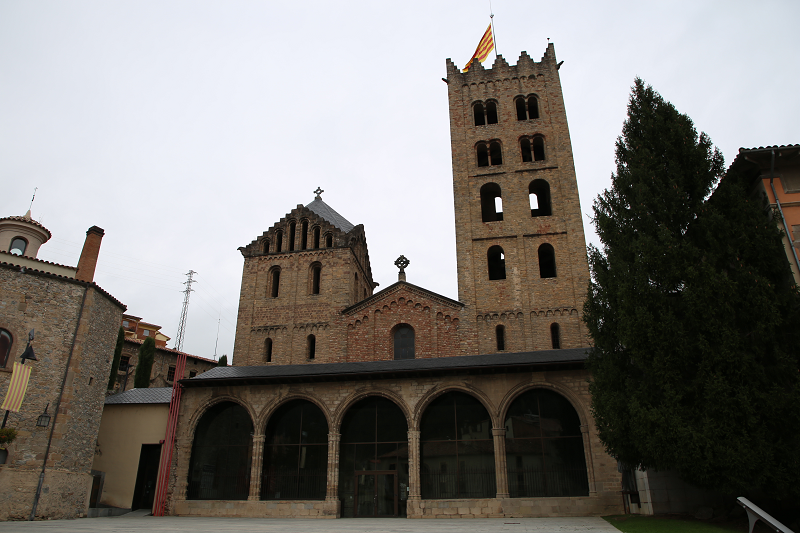 The city of Ripoll and the Romanesque monastery of Santa Maria

The first mentions of the presence of people in Ripoll belong to the Bronze Age (1500-600 BC). This information refers to small, disparate settlements near the Ter and Freser rivers, surrounded by mountains. The findings of bronze objects and tools confirm these assumptions.

In the IX century, residents of the surrounding areas began to concentrate around the place that today is called the city of Ripoll. The initiator of the settlement in this area was Count Wilfred the Hairy (Guifré el Pelós) (840-897).

For the sake of their security, the Ripolians settled near the monastery, which built a wall in the XIV century in order to guarantee peace for the population and not to be attacked from the outside. Security, as well as the construction of a water channel from the Fraser River, provoked the development of trade in the region. The water channel became the most powerful economic engine for the population and contributed to the development of industries such as iron processing, weaving, and woodworking.

In 1428, however, the monastery and its walls suffered serious damage as a result of an earthquake. The restoration of the monastery, which took place in the 15th century, led to the appearance of arches and vaults already in the Gothic style. However, the structure of the church has not been changed.

The city itself continued to develop beyond the destroyed walls of the monastery, when two new districts and new quarters appeared. And the precipice on the other side of the river Ter, formed as a result of the earthquake, was chosen by the abbot Climent Mai in 1573 as the site for the construction of the first Ripoll hospital.

Despite the fact that the population respected the monastery, confrontations between the monastery and the villagers, who in one way or another wanted to get rid of economic control and pressure from the abbey, were not uncommon in that era.

This situation was exacerbated by the consequences of military conflicts. First of all, we are talking about the so-called Spanish-French War of the Reapers 1640-1659 (Guerra dels Segadors) and the presence of French troops in the territory of Ripoll.

During the 16th and 18th centuries, Ripoll experienced rapid economic growth, in particular, thanks to the manufacturing of firearms (cannons, muskets). This fact made Ripoll one of the main weapon centers of both Spain and all of Europe.

In parallel, the city developed textile production, a chocolate factory appeared, and mills were built for the production of flour. This situation persisted until the beginning of the XIX century. During the War of Independence (1808-1814), the French often attacked Ripoll. The walls of the city suffered serious damage.

In 1812, the villagers were able to free themselves from the power of the abbey, to which they had been subordinate from the 19th century. The final blow, which put an end to the domination of the monastery and the period of economic prosperity, occurred during the First Carlist War (1833-1840).

The nationalization proposed by Minister Mendizábal, assumed that all property of the monastery should pass into the hands of the state. As a result, the abbot and the monks left the monastery and Ripoll. The property of the monastery was plundered. As a result of popular unrest caused by high taxes, part of the property was burned. The main unrest occurred in 1835 and occurred until May 1839, when Ripoll was attacked by French troops under the leadership of Commander Charles d’Espagnac. After heavy fighting on May 27, the French occupied the city, and, not quite satisfied with the victory, burned houses, bridges and many industrial buildings. Until 1839, the population of Ripoll was 3200 inhabitants. After the war, the population reduced to one thousand.

After the end of the conflict, some residents returned and started to reconstruct the city. At the same time (1844 – 1850), the state was auctioning off the remaining property of the monastery.

In general, the war led to the economic transformation of Ripoll – from the metallurgical sector to the textile sector. The use of the water of the Ter and Frazer rivers in the second half of the 19th century led to the creation of numerous factories thanks to foreign industrialists, who also benefited from the urban improvements that took place during this period. In particular, in 1882 a centralized water supply was built, supplying the city with clean drinking water. In 1892, centralized electric lighting was carried out. In 1880, a railway was built, which transported coal from the mines of Ogassa to Barcelona. These changes led to an increase in population, including on the outskirts and periphery of the city, near the mines and along the railway.

During the period of economic growth, thanks to the initiatives of Bishop Vic Dr. Josep Morgades, and many ordinary villagers, work began on the restoration of the church of the monastery of Santa Maria. The main reconstruction occurred in 1886 and lasted until 1893.

Before the beginning of the Civil War (1936), the city was actively developing. Fashionable aspects of modernism appeared in the architecture of the city, in particular, due to the activity of Joan Rubió, one of the followers of Antonio Gaudi.

The railway connection between Ripoll and France was established through the trans-Pyrenean railway, which opened in 1929.

In the cultural sphere, dynamic growth was especially marked, due to the emergence of numerous cultural associations, orchestras, theaters, newspapers and publishers. At this time, the Archival Museum of St. Peter (1929) was opened.

This prosperity ended with the outbreak of the Civil War, which resulted in the prohibition of any manifestation of “Catalanism” and the imposition of a new type of political regime.

After the difficult years of the postwar period, Ripoll once again enjoyed an era of progress and development. The textile sector was restored in the industrial area, the metallurgical industry began to flourish again. This period of rising prosperity was closely associated with impressive demographic growth, mainly due to migration flows that led Spaniards to Ripoll from all over the country. If in 1950 there were 7,451 people in the city, after 20 years this figure reached 10,000.

In order to comply with the new migration processes, the urban infrastructure began to develop beyond the borders of the old city. Since the very end of the dictatorship, in 1975, the city has undergone a series of positive changes aimed at creating the necessary conditions to meet the standards of the end of the 21st century.

Today the city is one of the tourist centers of Catalonia.