The growth in the number of visitors amounted to about 5% during this season, says the general director of Grandvalira ENSISA Conrad Blanch • All PYRENEES · France, Spain, Andorra 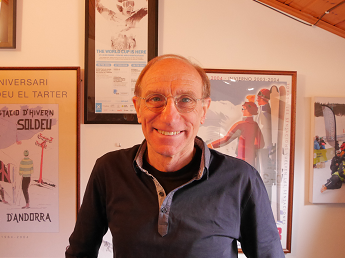 The General Director of Grandvalira (Grandvalira ENSISA) Conrad Blanch told all-andorra.com about the results of this ski season:

What were the outcomes from the Grandvalira ski resort last winter season 2015-2016?

The final results have not been announced yet. However, according to preliminary data, the growth in the number of visitors amounted to about 5%. Traditionally most visitors to Grandvalira are residents from neighboring Spain, France and Portugal. However, we also usually have skiers from Scandinavia, USA, UK, Israel and Bulgaria. The number of tourists from Russia has remained at about the same level as last year, even though the market fell twice.

Which new markets is Grandvalira interested in for the future?

Primarily China. In 2018 South Korea will host the Olympic Games, so the development of the Asian market is also a priority for us.

What is Grandvalira’s investment plan for next season?

At the end of April we will hold a meeting with the Board of Directors of ENSISA, during which we hope to approve the investment plan for the next year. Let me remind you, there are two shareholders of Grandvalira – ENSISA and S. A. E. T. D. E. (which holds a 50% stake). Last year, ENSISA, the interests of which I represent, invested about 7 million euros in the development and construction of infrastructure sectors that belong to this company (Canillo, El Tarter, Soldeu). Investments from S. A. E. T. D. E. (sector Grau Roig, Encamp, Pas de la Casa) amounted to about 8 million euros. This year investments of ENSISA will remain at approximately the same level.

Among the priority projects (development of infrastructure for families with children, the construction of new restaurants with outdoor terraces), we also plan to open several additional shops for the rental of ski equipment. Constructing new tracks is not yet included in our plans. We intend to focus on developing our infrastructure for entertainment. But we are discussing a project which would involve constructing a new ski slope for slalom events.

What about the prices of the ski passes for the next season?

We are planning a slight increase in our prices for next year. However, we are ready to offer our customers other products too, including FORFET +, which gives a 15% discount on every third visit to the resort.

Do you plan to attract foreign investors?

No. As far as I know, the second shareholder S. A. E. T. D. E. is involved in negotiations with the company that owns the Austrian ski resort ‘Sant Anton’. They are currently negotiating selling part of the shares belonging to Encamps administration. But I cannot share the exact details.

How do you plan to develop an advertising campaign and promote the brand of ‘Grandvalira’?

Over the past few years we have been revising our policy in the field of advertising. We are no longer interested, as before, in direct advertising on television or in sports magazines. Of course we are continuing to create promotional activities, however, when talking about advertising on TV, we now prefer to sponsor films related to winter sports. For example, as we did with Spanish and Andorran television programs, which we found to be much more effective than simple commercials.

It is also important for us to maintain our position in Barcelona’s advertising market – this city is very popular amongst tourists all over the world and ranks third in the number of annual visitors after Paris and London.
However, due to the change in the global philosophy regarding the positioning of products and services, we are much more actively engaged in the promotion of our brand in social networks. We independently produce video materials and publish reports about sporting events for the public.

Our business is B2C, and we focus on direct interaction with clients. One of our latest products is an app for mobile phones which contains the full information about the resort of Grandvalira, snow report, webcams and conditions of ski tracks, infrastructure, future events announcements, and also offers a navigation service. As our research shows, this product is highly demanded by our tourists.

Could you name the disadvantages Grandvalira may have compared to other European ski resorts?

Perhaps the lack of small, family-run restaurants with log fires and mulled wine in the mountains, which are so popular amongst the tourists in the Alps. Also, unlike for example ski resorts in France, where the technical infrastructure is maintained separately and restaurants and ski schools are owned by different owners, Grandvalira is responsible for the entire infrastructure.

Another potential downside of Grandvalira, from my point of view, is that unfortunately there is no tradition in Andorra of watching or supporting winter sports activities live. It’s part of the culture. In Slovenia, for example, during the ski jumping World Championship, 80 thousand people came to support the athletes. In Andorra during the women’s mountain ski World Cup event, which was held in February, the number of spectators was 10 times less.

Does Grandvalira collaborate with other ski resorts in Europe?

Yes, Grandvalira is a member of the Association of FIANET (Association of European ski resorts). The next meeting of FIANET will be held in September in Andorra. We will discuss the promotion of ski sports and share our experiences of our achievements.

What sports events are scheduled for next year?

We plan to hold international sports events like the Freeride World Tour (competition juniors), Total Fight Free Ski (snowboard and skiing), downhill… the List of activities is about the same as last season. With the exception of the world Championship on mountain skiing. This event is planned in Andorra for 2019 (the competition in Grandvalira will be held for both men and women). This is a very important and prestigious event for us, and we must be adequately prepared. The year after that, we will hold the European championship in Alpine skiing (speed and technical disciplines). The competition will be held on two ski slopes – Aliga in El Tarter (downhill) and Avet in Soldeu (technical discipline).

Do you ever plan to hold the world championship in ski jumping (FIS Jumping World Cup)?

The organization of such an event is not included in our plans. We do not have a suitable site for the creation of the necessary infrastructure; our mountains do not allow us to implement this project. In my opinion, today one of the best places to hold this kind of competition is the ski resort ‘Planica’ in Slovenia, which I already mentioned.

How is Grandvalira preparing itself for the summer season of 2016?

From July to September we start to work in “summer mode”: in Soldeu we open the field for playing golf and the bike Park, in El Tarter – karting, and in Canillo we open the Park for summer family entertainment. However, it is important to note that in June we normally begin preparations for the winter, in order to be ready to welcome our guests again in December.