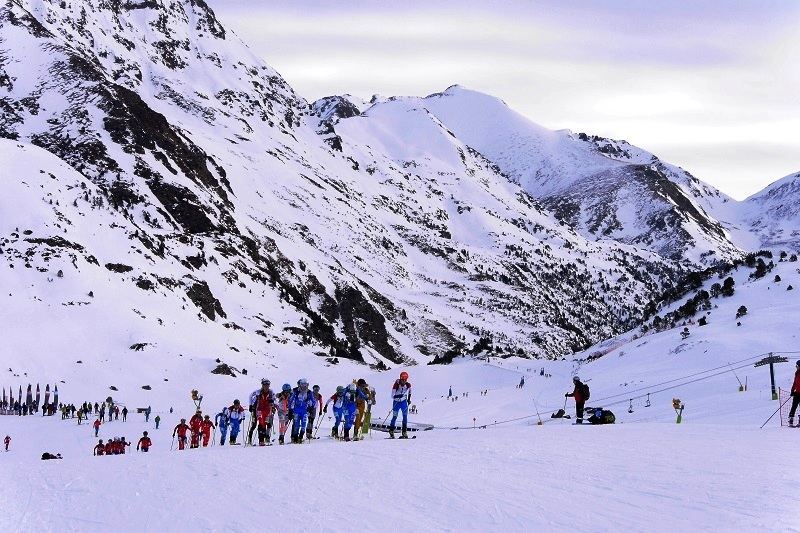 The Font Blanca 2017 (FB’17) Individual Race, that has been again this year the initial event of the SkiMo World Cup, had the young german skier Anton Palzer as the unexpected winner, surpassing clearly the, in principle, favourites to be on the podium for the Senior Men category.

Among women, Laetitia Roux has not let anyone surprise her and got the win she couldn’t fight for last year because of a lingering injury.

The weather kept the Race Organizing Committee in suspense until the last moment. The severe weather conditions that punished the race stage forced them to do small last minute changes, always keeping the base of a very alpine track, that has been praised later on by the racers as well as by those who have followed, live on-site, the development of the race at the Vallnord-Arcalis ski resort.

At the start of a season surprises are usual, but this time the FB’17 Senior Men Podium beat the forecasts.
The spectacular fight between two young skiers, Damiano Lenzi and Anton Palzer, has been the great highlight of the competition.

Once the 2/3 of the ski race were completed, Lenzi was the prominent leader more than 50” ahead of a trio formed by Palzer, Gachet and Eydallin. Jornet and Boscacci were already more than 1`30” away from the leader.

Palzer’s comeback on the final stretch nearly got him the victory, however Lenzi fought to death in that last part, and despite a spectacular fall on the last downhill, crossed the finish arc as a winner, but… with only one stick, since he lost the other one during the fall. For this motive he got a 1’ penalty that resulted in him going down to second place at FB’17 Individual.

The stars of FB’16, Jornet and Boscacci, had to settle for the sixth and the ninth place respectively,

Among women the forecasts were fulfilled. Laetitia Rouz, that yesterday received the trophy as 2016’s overall winner in this speciality, clearly outperformed her fellow countrymen Axelle Mollaret and the FB’16 individual winner, the swedish competitor Emelie Forsberg.

Among the ISMF Junior, the italian delegation dominated. Davide Magnini and Giulia Murada were the respective winners in the men and women categories.

Tomorrow (Jan 22nd) the second part of the Font Blanca 2017 will take place. It will be the Vertical Race on the usual race stage of the last years at the Vallnord – Pal Arinsal zone.

The competition will start at 9.30am with the start of the different categories of the SkiMo Andorran Cup, to finish with with the World Cup races of the speciality. The starts of the ISMF Senior categories (Men and Women) are expected to be at 11.00am and 11.15am respectively.