The conference "Internal market and law of the European Union" took place at the Embassy of Spain in Andorra • All PYRENEES · France, Spain, Andorra 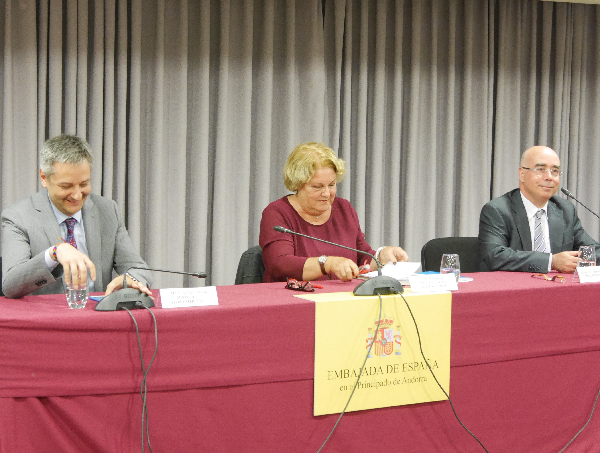 The conference “Internal market and law of the European Union” has taken place today at the Embassy of Spain in Andorra with the participation of the Ambassador of Spain in Andorra Manuel Montobbio, Minister of foreign Affairs of Andorra Gilbert Saboya and Professor of the international law at the Autonomous University of Barcelona (UAB) Blanca Vilà.

This conference is the fourth in the series of dialogues between representatives of the European community about Andorra, which is not part of the EU, but a geopolitical part of Europe.

The issues of optimization of trade between Andorra and the European Union and the free provision of services were discussed at the conference.

The event was also attended by the Minister of justice and internal Affairs of Andorra Xavier Espot, minister of transport and telecommunications of Andorra Jordi Alcobé, General counsel of the mixed SDP parliamentary group of Andorra Naudi Victor Zamora , leader of Social democratic party of Andorra, the former Prime Minister of the Principality (2009-2011), Jaume Bartumeu, the mayor of Andorra La Vella Conxita Marsol and others