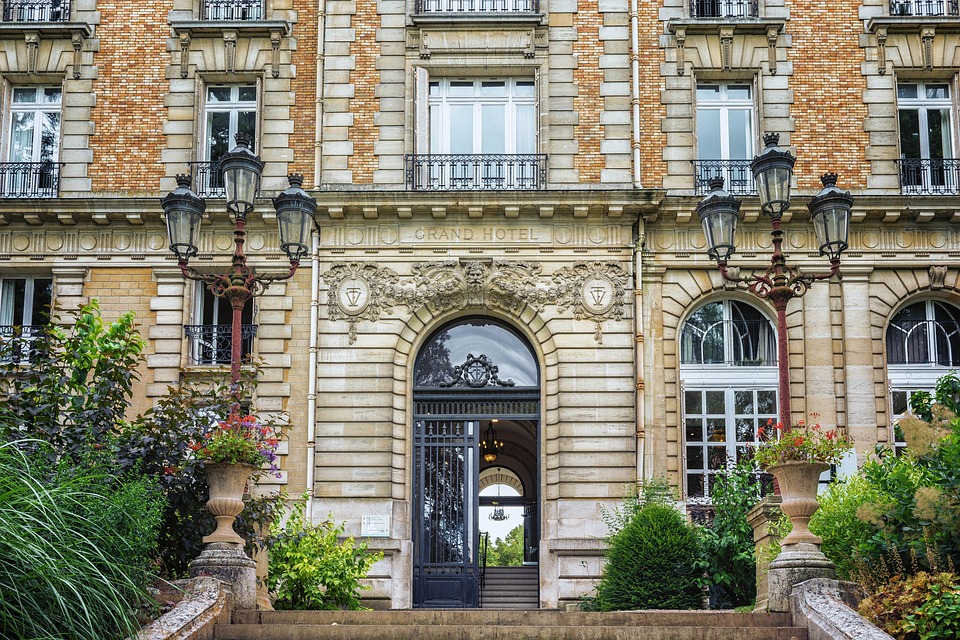 France (since the days of kings) was associated with luxury, being chic, having exquisite taste, and beauty. This country miraculously preserves this beautiful cultural heritage, bringing fresh notes of modern life. Therefore, you can feel the charm of luxurious antiquity and enjoy modern comfort at the same time in France. French hotels are just that kind of fusion. There are special ones among them, which are famous all over the world for luxury and offering truly royal conditions.

This luxurious building has been a historical monument since 2009.

Located on the most elegant street of Paris, d’Iena, next to which there is Trocadero square, a favorite meeting place for Parisians, along the Seine, near the Eiffel Tower and Champs Elysees, Paris’ Golden Triangle.

You can see the symbol of Paris, the Eiffel Tower, from the windows of most rooms and suites.

This hotel is the symbol of the “French lifestyle”, as it is a very attractive harmony of elegance and comfort.

There are 4 banqueting halls, a swimming pool, spa complex, and 3 oriental and national restaurants (2 of them are fine dining ones) in Shangri-la.

This elegant hotel is also in the centre of Paris, close to the Champs Elysees, Parc Monceau, and Arc de Triomphe. The Lido, Louvre, and Notre Dame Cathedral are also nearby.

If you want to become absorbed into the city center life then this hotel is for you.

The hotel was completely renovated just a year ago and it has retained its former luxury and been enriched with modern amenities for guests.

There are 3 restaurants, many chic apartments and suites, a comfortable hall and other services in the hotel which allow guests to feel like the cream of the French society.

The building is considered to be the oldest of all the hotels in this city since it was built in 1862. The hotel has been restored and renovated, which has made it even more prestigious and modern.

The hotel is near the Grand Opera and other Paris landmarks.

The interior is famous for designer delights, crystal chandeliers, handmade items, bright furniture, and its respectability in general.

The rooms have every imaginable comfort and very refined design.

The hotel’s restaurants are renowned throughout Paris as well as the spa. In addition, the Inter Continental hosts business conferences and other important events in its luxurious rooms.

The hotel has about 500 rooms in total, of which several in particular are particularly chic, their windows overlook the roof of the Paris main theater and have a club bar with limited access.

The hotel, besides a comfortable stay in a luxurious building, is famous for its restaurants.

Majestic Barriere is located in the heart of Cannes and has become the true city symbol. It has hosted many legendary personalities over its 70 years of existence ranging from royalty to show business stars and Cannes Film Festival guests.

This hotel showcases respectability and success, embodied in 349 rooms, which they renovated in 2009 and decorated in the Empire, Provence, and King Louis style, but they look very elegant and even modern in general.

The hotel’s rooms and suites overlook the famous Croisette embankment: the centerpiece of the citizens and guests walk on the Cote d’Azur.

This hotel location is on the Croisette embankment too and it is a historical monument of France, built back in 1912.

Stars are also indispensable attribute in this hotel. The hotel’s facade is as famous as the Cannes festival. It represents a real glamorous holiday with its luxury and truly French chic style.

Negresco Hotel is a luxury creation built by Henri Negresco with the help of architect Edouard Nieerman. The hotel has been operating since 1913 and has seen many celebrities in its lifetime. This museum contains beautiful collections of antiques.

This building was proclaimed a historical monument of France in 1974, and according to Travel Editors of America, it was named one of the 10 best hotels in the world.

This hotel bears the name of the town where it is located. There is a one hour drive from Nice to the hotel, and it is just a stone’s throw away from the world-famous Saint-Tropez resort.

The hotel consists of 39 luxury villas, which are located on a hill and offer beautiful seascapes over the bay of Pamplona.
Each villa’s interior is exclusive and designer. This hotel is very modern in terms of design and services.

La Reserve Ramatuelle only emphasizes fashionableness and the attractiveness of Cote d’Azur and Saint-Tropez for celebrities of this world.

This hotel is notable for its romantic legend in addition to sophistication and respectability, which in St. Tropez is almost on every corner. It says that the French general fell in love with the eastern princess from Punjab and so he built this magnificent building for her and their five children as early as in 1835.