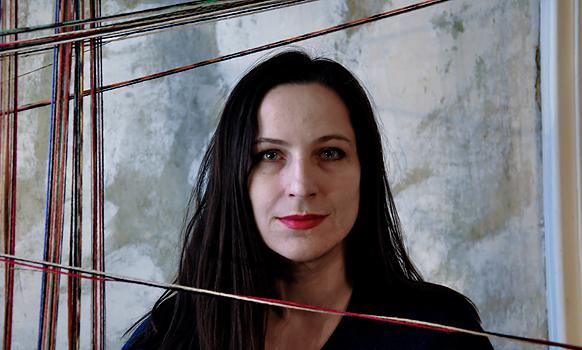 Renate C.-Z.-Quehenberger is a philosopher, geometer, art researcher and science communicator based in Vienna.

Her thesis “On the Hermeneutics of the Penrose Patterns — Art Research on the Phenomenology of higher dimensional Spaces” describes her contribution to mathematics, the finding of the 3D representation of the Penrose Kites and Darts Tiling (Epitahedron, E±), unit-cell of the 5-dimensional space, identified as Plato’s 5th element and relevant for Henri Poincaré’s homology sphere.

She publishes in the fields of geometry, archaeology and quantum physics. Her visualisations include 3D animated geometry films, installations and objects exhibited in art spaces and museums.

She was the local organiser of the International Symmetry Festival 2016 with the pentagram (“genetic”) music concert in Vienna, a science and art programme series that brought together scientists, artists, educators and practitioners interested in symmetry or in the consequences of its absence.

Furthermore, she is a member of the Austrian Science Center Network and member of the German Society for Geometry and Graphics (DGfGG). She exhibited, among others, at Neues Museum Weimar (2012), Museums Quartier Vienna (2013), The Lalit Kala Akademi (National Academy of Fine Art, 2013) and Natural History Museum Vienna (2018) and Bozar Lab in Brussels (2019-2020). Her films were screened at Ars Electronica, Symmetry Festival, Bridges Mathematics & Arts Festival and IMAGINARY.

In 2018, she received the Entropy Best Poster Award at the Linnaeus Conference: Towards Ultimate Quantum Theory (UQT) for visualisation of unified theories in five dimensions entitled A quest for an epistemic reset in higher dimensional space.

The advantage of 5D geometries for describing physical phenomena was a.o. strongly recommended by H. Poincaré and L. de Broglie; c.f S. in Lie’s theory of continuous transformations the sphere is „situated“ in 5-dimensions, Klein’s quadratic set of a 5-dimensional projective space with symmetry which reflects the symmetries of the epita-dodecahedron.

The recently developed hyper-Euclidean geometry derived form Penrose tiles (known as 2D slice of 5-dimensional space) may be useful in testing algebraic structures visually by means of 3D animated geometry which provides an esthetic access to symmetries: it may be regarded as an extension of Mackay’s generalized crystallography — a universal tessellation by means of a fundamental polyhedron which confines Poincaré’s idea of a ho-mology sphere homeomorph to a 3-d sphere; — Poincaré was researching this fundamental polyhedron, examining cubes and pyramids,— surprisingly, the epitahedron is something in between these shapes and it is composed of the 4-dimensional dodecahedron which Poincaré suggested as a model for the Universe. I assume Poincaré himself might prefer my solution with all possible symmetries inherent since he also said that the 5-dimensional space is appropriate for Group theory. Although Poincaré is the father of topology he was in favor of a hyper-Euclidean geometry.

You introduced your newly discovered polytope, the epitahedron, which can be assigned as a 3-dimensional cell of the 5-dimensional space. What is the objective of your model?

The suggested model aims to unite features of different concepts such as Riemannian manifolds and Hilbert spaces, as a discrete dynamic hyper-Euclidean vector space. It is derived from the geometry of the 5-dimensional space based on the 3D representations of the Penrose kites and darts tiling, which exhibits the principles of the Poincaré homology sphere. This is the space which works like a machine, as required by group theory and may serve as a toy model for the universe, as suggested by H. Poincaré.

The discovery of the new heptahedron followed intuitively from the question: “If the Penrose Pattern is a 2D slice of 5-dimensional space, what would its 3-dimensional space cell look like?” Enfolding the kites and darts to the obtuse and acute triangles from the Robinson decomposition seemed to provide appropriate faces, to which I intuitively added another acute triangle. This asymmetric 5-sided pyramid would require a curved pentagonal base, so I divided the pentagon into a trapezoid as a base and one obtuse triangle fitting to the boundary surface.

The result was a closed pyramidal polyhedron with 7 faces in two versions; therefore, the heptahedron was named epitahedron {E±): the convex E+ („E plus“) and by pushing the face cell with three obtuse triangles into the backside, the concave version, E- („E minus“) appears. Recent investigations performed during the Quantum Cinema project revealed some of their intriguing higher dimensional properties which could not be displayed otherwise than by means of digital media art.

The newly re-discovered 3-D representation of the 5-dimensional space, named epitahedron, can be assumed as unit cell of the higher dimensional space that enables the composition of an infinitely inflatable space which has the boundary in the shape of a dodecahedron; similarly to the boundary of the Penrose Pattern in pentagonal of decagonal shape analogous to the symmetry axis. The art-science author Arthur I. Miller summarises it as follows:

“The fifth element – the quintessence has its geometrical form as epitahedron and we live in a Poincaré dodecahedral space, after the French polymath Henri Poincaré.” (Miller, 2013)

You developed digital dynamic geometrical models of the different theories of light. How can we make the phenomenon of light as electromagnetic distortion understandable and visual, incorporating the ideas of Maxwell, Faraday and especially Theodor Kaluza, who placed light in 5-dimensional space?

A photon seems to be a non-existent entity for the experimental devices, such as interferometers, waves measure, while other scientists, like those in quantum optics, manipulate them as particles and treat them like golf balls. 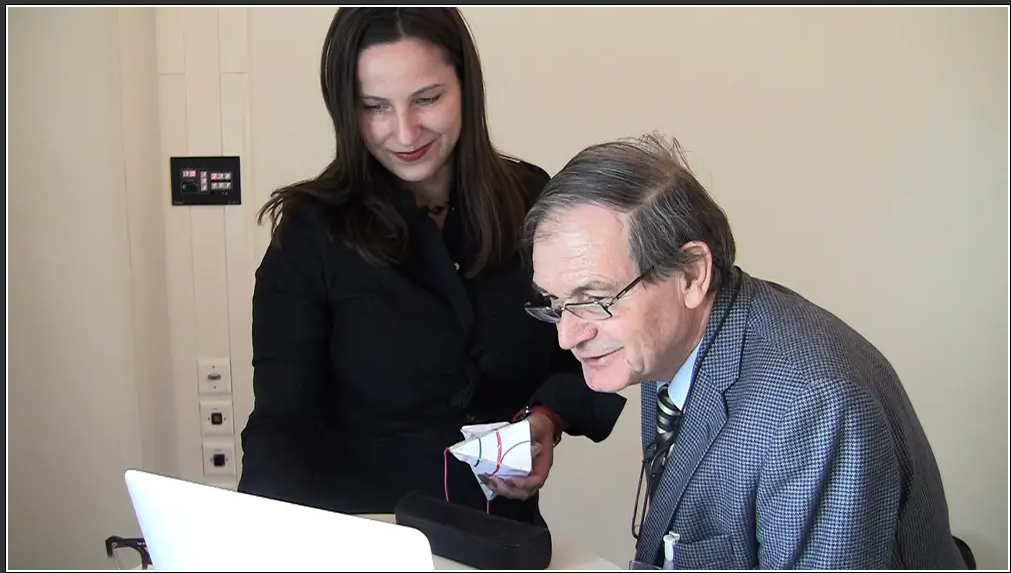 We examined experiments such as those for the entangled photon picture and investigated lines of force to bring together the notion of “light quanta” and their connection to a discrete space structure in 5D.

Of the questions that remain open, we would like to address the following: How can we conceptualise and visualise light and what assumptions does a geometry of light require so that it can satisfy optics and quantum field theories and unify the phenomena of light as a wave AND a particle, in a discrete 5D space?

By reintroducing Maxwell and Faraday’s lines of force into our model, we propose a hypothetical 6D grid that acts as a discrete space-time structure which constitutes itself (in the Platonic sense) from interfering lines that fold and interact as propagating points, each driven by its own momentum (by consecutive movements) into 5 distinct directions of space and creating knots within the fabric of space. This meets with Huygens’ assumptions about “frequent percussion of the corpuscles which strike the Ether” at the “luminous points”.

In our digital model, the straight lines can be used to visualise Weyl’s point-to-point transformation within the discrete space grid by obeying the rules of number space in a complex way.

Under the above assumptions, entanglement is a characteristic of space itself – the natural connection between two separate halves rather than the imposed connection between two separate particles. Furthermore, we would like to note that this discrete space grid – comparable to the historical notion of ether – is not only indispensable for understanding electromagnetic phenomena such as light as turbulence in 5D space, but also makes sense for the comprehension of the principles of relativity and the notion of time, the 4D behaviour of “space time”. For the motion of 3D spaces within four dimensions (and only there) the notion of time is convenient. Similarly, the spatial behaviour itself “creates” light in 5D.

What do you think of Pentagramon and “genetic” music of golden ratio?

The harmonies of the „genetic“ music scales immediately touched me and seemed to resonate with the cells of my body.

Moreover it is the sonic access to mathematics underlying the genetic codes. As such it is an exquisite example of the convergence of science and art developed by scientists. You and Sergej Petoukhov did a great job by establishing it with fantastic composers such as Ivan Soshinsky and Benjamin Skepper at the Moscow State Tchaikovsky Conservatory.

Inspired by the fact that hydrogen atoms are exhibiting Penrose Pattern structure and hydrogen bonds characteristically appear in quantities 2 and 3 in complementary pairs of nitrogenous bases [GACT] in DNA and [GACU] in RNA, I was developing a scheme for visualization of musical notes by means of epitahedra. Hence 3D animated 5D space cells are synchronously performing Genetic music matrices in a way that the frequencies of the melodies of hydrogen become visually accessible as wavelike patterns of dancing hyper space.

Thank you for your answers and I wish you success in your scientific creativity!