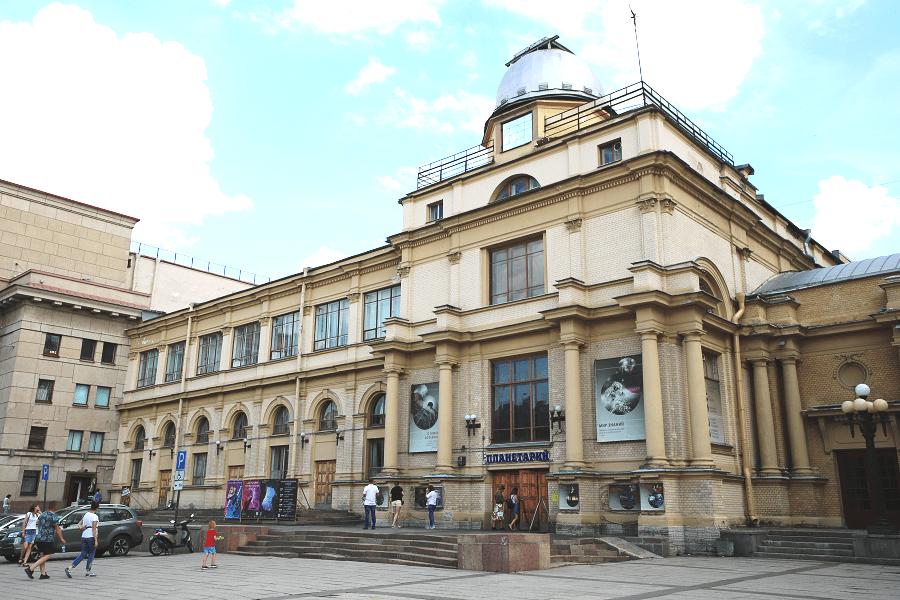 St. Petersburg Planetarium is a planetarium located in the historical center of St. Petersburg, in the Petrogradsky district, next to the Kronverksky Canal in the Alexander Park.

The Leningrad Planetarium occupies part of the building of the former People’s House – the building where before the revolution there was a hall for entertainment and reading (the so-called “Iron Hall”). The building was designed in 1898-1900 on the initiative of Prince A.P. Oldenburgsky by the architect G.I. Lutsedarsky.

In 1910-1912, according to the project of Lutsedarsky, the building was expanded – the People’s Auditorium with an opera hall was built. This building is currently occupied by the Music Hall.

The planetarium was opened in the building on November 4, 1959 and became the third planetarium in the USSR after Moscow and Volgograd.

The Star Hall of the St. Petersburg Planetarium is one of the largest in Russia.

The dome of the hall, with a diameter of 25 meters and a height of 15 meters, is designed so that it is not visible from the outside of the building. Hall diameter: 23.5 meters, height: 14.5 meters.

The Astronomical Observatory of the St. Petersburg Planetarium is designed to observe celestial objects with the help of several telescopes.

The dome of the tower has a diameter of 5.25 meters and a height of 5 meters.

Telescopes installed at the Observatory:

Meade LX-200, a Schmidt-Kassegrain system with a mirror diameter of 250 millimeters, with a magnification of 40 to 650 times, allows you to see stars up to 12th magnitude, star clusters, double and multiple stars, nebulae, galaxies, the Moon and planets.

Meade ETX is a computer-controlled traveling telescope with a magnification of 15 to 150 times, which allows you to see stars up to 10th magnitude, binary stars, open star clusters, the Moon and planets.

Coronado SolarMax is a chromospheric telescope with an H-alpha filter, magnification from 10 to 100 times, allowing you to see the solar chromosphere, granules, prominences, filaments, flocculi and flares.