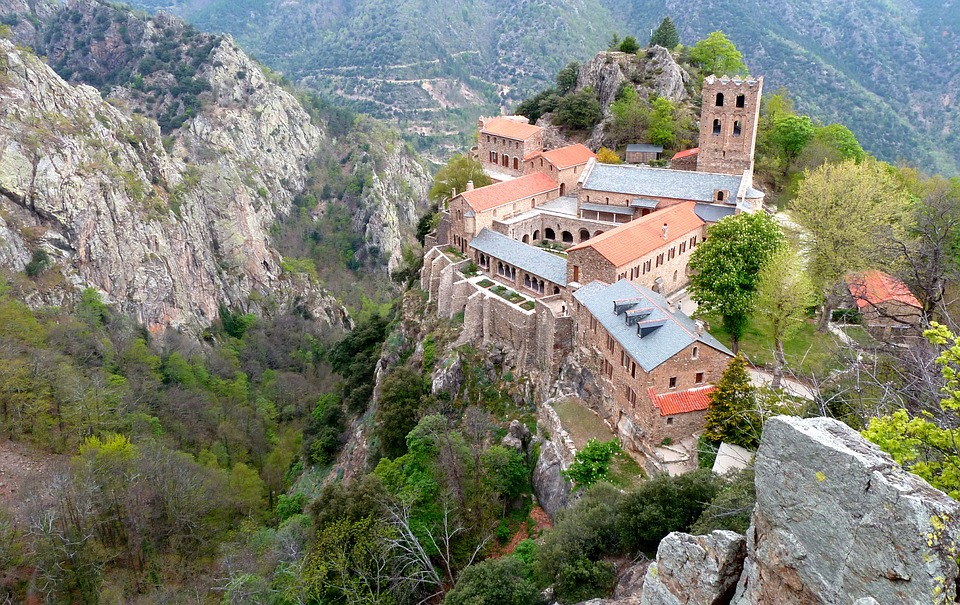 Saint-Martin du Canigou Abbey (L’abbaye Saint-Martin du Canigou), Pyrenees (South of France, close to the Spanish border) celebrated its 1000th anniversary in 2009. The great Catalan family founded the abbey at the beginning of the 11th century; the abbey knew the times of both glory and defeat. Thanks to the courage and perseverance of many people, the abbey was revived from ruins at the beginning of the 20th century.

The consecration rite of the Saint Martin abbey church took place in November 1009.

Benedictine monks occupied the abbey for the next eight centuries. They led a life completely dedicated to God, according to the teachings of their spiritual father, St. Benedict. One of the monks wrote in a letter in 1779, that there were no more than five of them, all of old age; and food was barely enough to survive. They asked for permission to leave the abbey, and having received it, they left this holy place in 1783.

The abbey was abandoned, confiscated during the French Revolution, and then bought. Columns disappeared; people used part of the stone for other purposes. The building became ruins after a few decades.

Monsignor Jules de Carsalade du Pont, Bishop of Perpignan-Elne, inspired by the “revival” of Catalan culture in the late 19th century, launched a major restoration project. The goal, much more important than breathing new life into a pile of stones, was to restore the abbey’s spiritual vocation. Because “the founders called the sons of Saint Benedict to remain forever on this mountain, similar to the heart of Catalonia, wishing that the prayer from there would rise to heaven both by day and by night.”

When Monsignor Jules de Carsalade du Pont, nicknamed “The Catalan Bishop” died in December 1932, he had not had enough time to complete the restoration. The restoration continued over the next thirty years. The benedictine monk, Father Bernard de Chabannes put his hand to this project in 1952, leaving his original abbey in Saint Martin de Canigou for almost forty years.

When Father Bernard de Chabannes became too old, Monsignor Chabbert, Bishop of Perpignan, entrusted the abbey to the Communities of Béatitudes with the mission of prayer, spiritual and tourist hospitality in 1988.

Every year, tens of thousands of people climb the path leading to the abbey. You can stay for a few days in the abbey, sharing the religious life of the brothers.

The abbey has the status of a historical monument.

Saint-Martin du Canigou is located about a third of the way to the top of Canigou mountain, which you can easily reach by car or you can walk 40 minutes from the village of Casteil.

Free for children under 4 years.

The Abbey is closed on Mondays from 1 February to 31 may and from 1 October to 31 December.

The nearest city is Vernet-les-Bains