According to financial experts, in 2023 the world could enter a technical recession with inflation remaining high due to the geopolitical situation.

How will the global geopolitical situation affect tourism in 2023 in Europe in general and in Andorra in particular?

At the beginning of the year, we asked Betim Budzaku, the Chief Executive Officer of Andorra Turisme.

What do you expect from the 2023 year? What will the tourist market look like?

Indeed, our forecasts for this new year are not very optimistic. The results of the last year 2022, which we achieved, showed that there are serious problems not only here in Europe, but throughout the world. I am talking now about the level of inflation and its impact on the economic situation, which is now quite dramatic. However, despite the current geopolitical situation, we managed to maintain a certain balance in the field of tourism due to the geographical location of Andorra, which is accessible by car from the nearest international airports in Barcelona and Toulouse.

We have all had a bad tourism experience during the pandemic. But we have slowly learned to cope with it, focusing mainly on the development of tourism in nearby countries like Spain and France. We may have a recession, this time due to economic problems. But now we’re focusing mainly on about ten nearby countries, which account for 95% of all tourism in Andorra. It was hard to believe that after COVID we could get the results of 2019, but it happened, and it is equivalent to ten million room nights in 2022 with 15 million stays.

So, we are quite optimistic because we can continue to use the same tactics as during the pandemic. We are very pleased with these figures. But we must push forward with another alternative—and not only the touristy part—and try to bring the brand of Andorra to another level. I mean, first, we need to think of not only quantity but also quality. We must develop the infrastructure to be able to receive all our visitors and accommodate them adequately. Because now we are at the top in terms of the number of visitors, but not at the top in terms of expenses that tourism can get in Andorra.

How much does an average tourist spend in Andorra per day?

It depends on the season. In winter, tourists spend much more money. From December to April, we have a high season, and the expenses are 140-150 euros per day per person. If we are talking about the summer season, it is about 120 euros per day. If we multiplicate the number of visitors, we will get about 1.8 billion euros of the total GDP of Andorra. Meanwhile, the budget for tourism development of the Government of Andorra is about 20 million euros, which is very low if compared with the rest of the countries where the tourist income represents a high percentage of the total GDP.

How much has Andorra lost this year due to the closed borders with Russia and the absence of Russian tourists?

For us, the Russian market was very pleasant, and we have excellent relations with tour operators who carry out organized travel. This is not very common in the 21st century for many reasons including the Schengen visa, and the language barrier.

Twenty years ago, Andorra made a significant effort to attract Russian tourists, and we had a Russian-speaking team. So this market has always attracted us greatly. 2019 was the last year when we worked normally with the Russian market, we had about 40,000 people, the Russian market generated a lot of room nights, and the average stay was about 7 nights, so we are talking about 300,000 room nights in total (we are talking about all Russian-speaking countries) we have practically lost per year.

In 2020-2021, we did not accept Russian tourists due to the pandemic and the incompatibility of Russian vaccines with European ones. We have lost this market since 2019 and this is very bad news. So, we can multiplicate 300,000 room nights per 3 years – this is what we have lost.

So, we need to find an alternative because today it will be very difficult to reactivate this market shortly.

This ski season is very unique because of the energy crisis in Europe. In France, for example, half of the lifts don´t work, and the speed of the rest is much slower, which negatively affects the quality of skiing. At the same time, prices for ski passes have risen. What about Andorra?

The season started off pretty well. Of course, the more snow, the lower the cost of maintaining the tracks with artificial snow, and the colder the weather, the easier it is to make artificial snow. So far, we cannot boast of either snow or cold weather.

Skiing is our core business, and we hope we don’t have to sacrifice business because of the energy conservation issue. We must learn to use new technologies to save 15% of energy this year.

What about ski passes prices?

Today, everything is much more expensive – from tomatoes to flights to specific countries. I had the most expensive coffee in my life on the Champs Elysees about two years ago—it cost about 9 euros. My friend was staying at a hotel in Manhattan and paid $65 per person for breakfast. So, life was expensive in the past too.

Grandvalira tries to diversify its offer. The price of a ski pass on Sunday in December will be more expensive than, for example, on Thursday in March. Therefore, you can plan your holidays in advance, based on your budget. In this way, overcrowding in ski resorts can also be avoided. This means you can pay less and enjoy more.

The objective for this year is to achieve the figures for 2019, which was very good. That’s why this year we will operate under a single brand: one country and one ski pass. We have much more ski slopes than roads. And now all ski slopes are one brand, which is much easier to advertise in foreign markets.

Do you have plans to cooperate with neighboring ski resorts in Catalonia, Spain or France? Do you plan to issue a single ski pass? Would it be interesting and profitable for Andorra?

Actually, we collaborate with different destinations. However, our focus is developing Andorra ski slopes and attracting people here.

Andorra has an important additional part of its “winter product” – these are “after ski” parties. Most of the tourists come to Andorra because of these parties. What will Andorra offer this season?

We generate many events throughout the year, not just in winter. As for cultural events, this is the Cirque du Soleil in the summer, the Andorra classical festival by the end of May and the beginning of June.

This winter there will also be many after-parties with famous DJs.

We try to offer a good mix of sports and cultural activities. The Alpine Skiing World Cup is one of them and will be held in March.

We have about 75 professional cyclists living in Andorra. We push cycling tourism very hard, and another big event is the BTT Mountain Bike World Cup, which will be held in August. Also, in August we will have La Vuelta-2023.

And the Tour de France?

Tour de France is more difficult to attract, but we try to make this prestigious cycling race occur every four to five years on our territory. It is not so easy to organize a Tour de France competition outside of France. 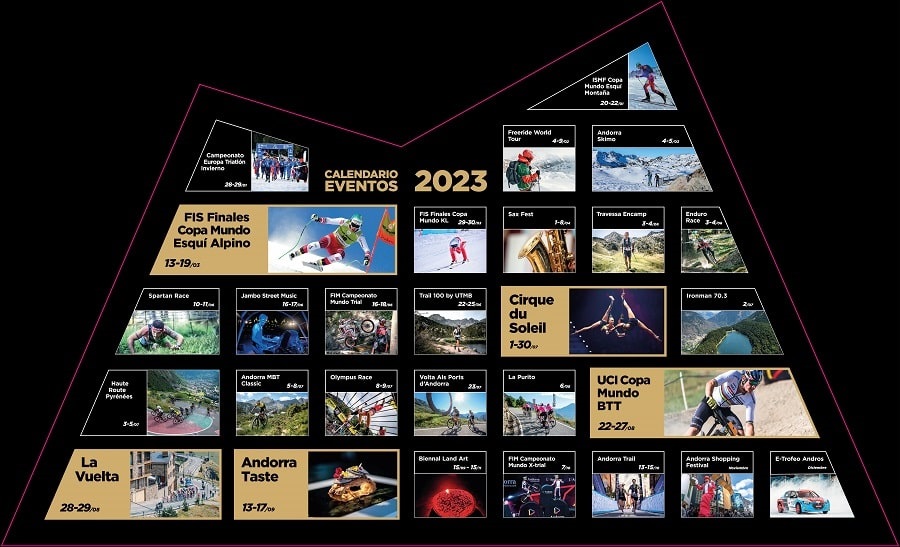 Earlier you told me that you were at the final stage of decision-making regarding a multifunctional arena for concerts and big events with a maximum capacity of 4,000-6,000 people, which is most likely to be located in Santa Coloma. Is there any evolution in this matter?

We do not have our own builders and we cannot attract many builders from neighboring countries because we cannot accommodate them due to the shortage of housing in the country.

But on the other hand, we are still very interested in constructing this facility, which is a multifunctional arena. Just now is not the right time for this. Moreover, this project is a link in the same chain with a more global infrastructure development project. Building such an arena means being able to accommodate all these people, which means we need new hotels, and we need to unload traffic.

By the way, about traffic – now this problem is becoming more urgent as there are more traffic jams in Andorra. Actually, it harms tourism development. How do you see the solution to this problem?

Our problem is not exclusive. If you go to the coast of Spain in August, you will also see many traffic jams. What’s more, you’ll get stuck in traffic during the high season if you take the toll road to Nice or another city on the Côte d’Azur. It’s not an excuse of course. We must educate Andorra to sacrifice a car to move from one place to another. The first step has already been taken. The government has made it possible for residents to travel by bus for free throughout the country, so most Andorrans have already switched to buses.

From your viewpoint, what additional infrastructure does Andorra need to promote tourism – a railway, new hotels, new roads and maybe a monorail?

Creating alternative roads will be a good option and a tram might be used in the future. We also have to push more flights from Andorra-la Seu airport (75 people per flight). We can cover Paris, London, Rome, Lisbon and Brussels.

Has the introduction of a tourist tax on tourists staying in hotels had any negative effect? How much does it give the country’s budget?

There is no negative effect because this tax rate is very low. We expect to get 8-10 million euros per year.

Who are your main tourists this year?

85% of our tourists are from European countries such as Spain and France, and Scandinavian countries. The UK is our key market for the future, as well as Germany and Portugal.

We hope that in 2024 we will return to the Asian market. We were very active in China and stopped working there due to coronavirus reasons. The US is also part of our future strategy. And, of course, we hope that one day we will restore everything that we lost in Russia. It’s a pity that the Russian market is closed to us.