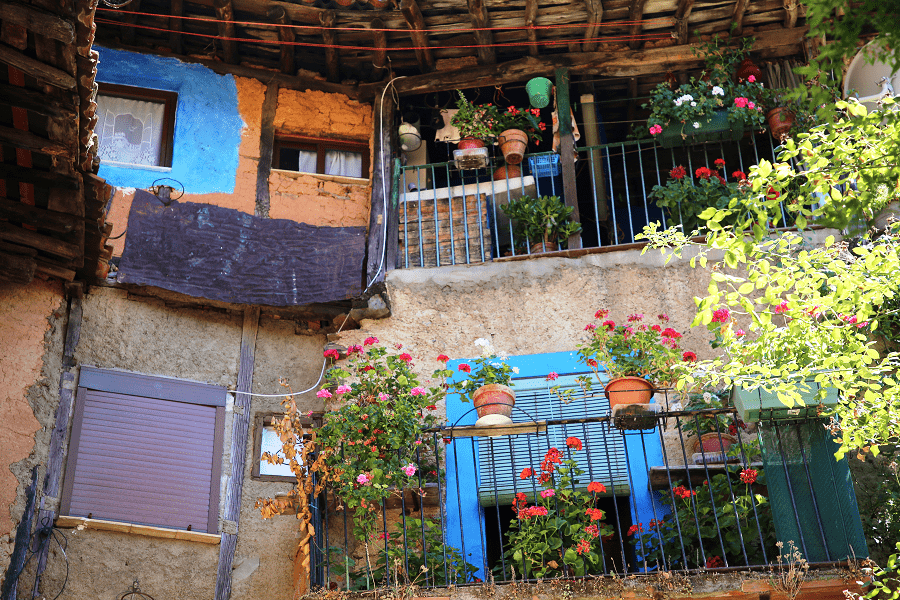 Robledillo de Gata is a city and municipality in the province of Cáceres, autonomous community of Extremadura (Spain). Its adobe and wood constructions give it an eminently mountain flavor. 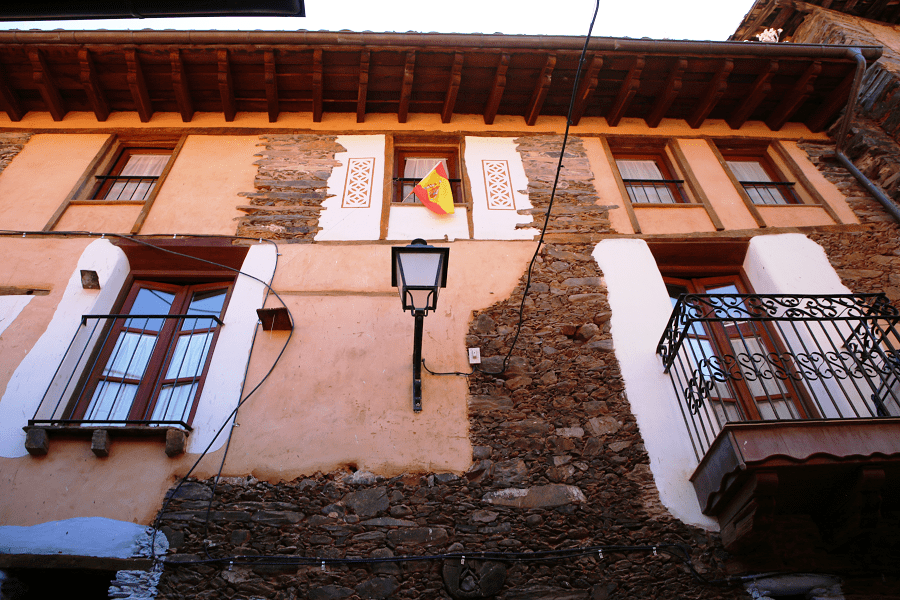 Since 2019 Robledillo de Gata has been a part of the network “The most beautiful towns in Spain“. 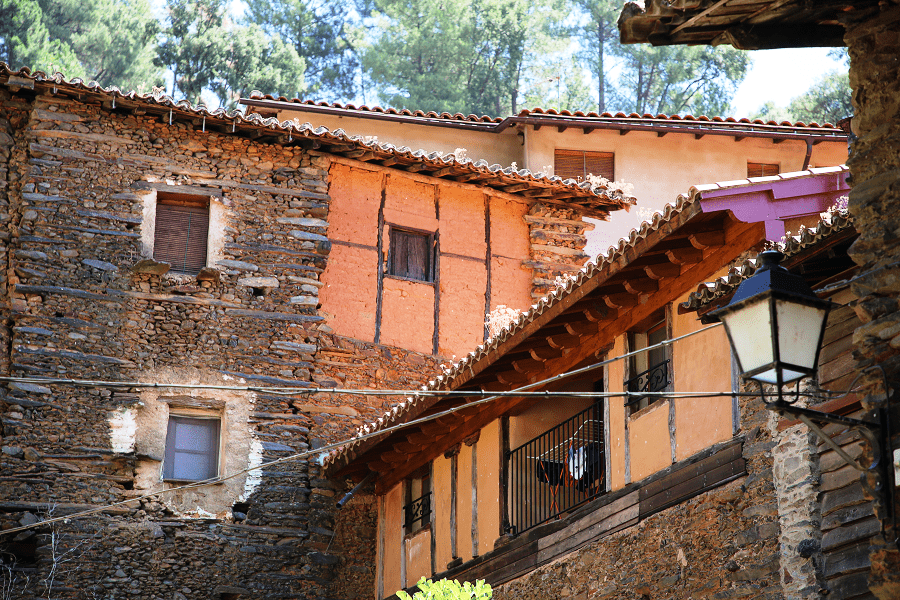 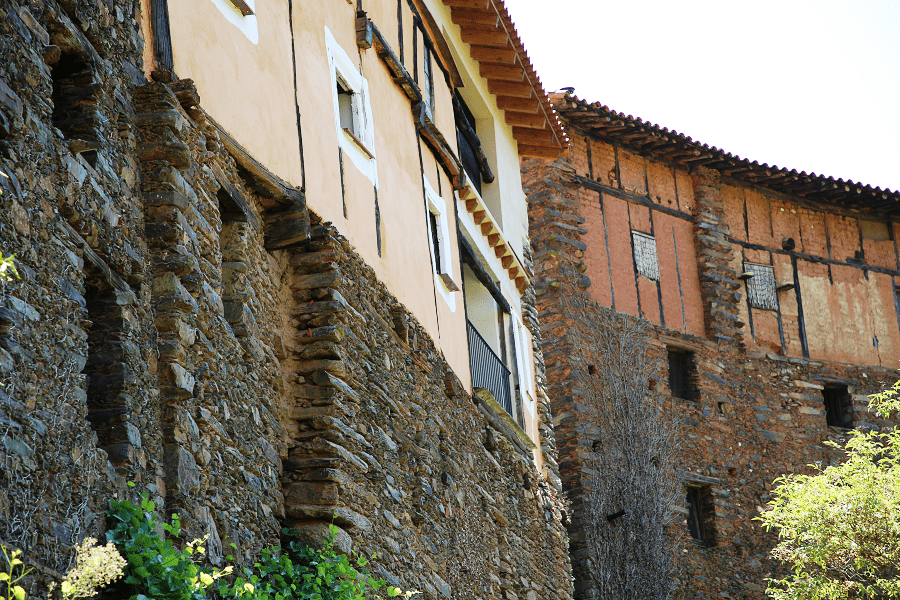 It is an outstanding set of domestic and popular architecture, manifesting itself as one of the best provincial exponents of rural urban centers. 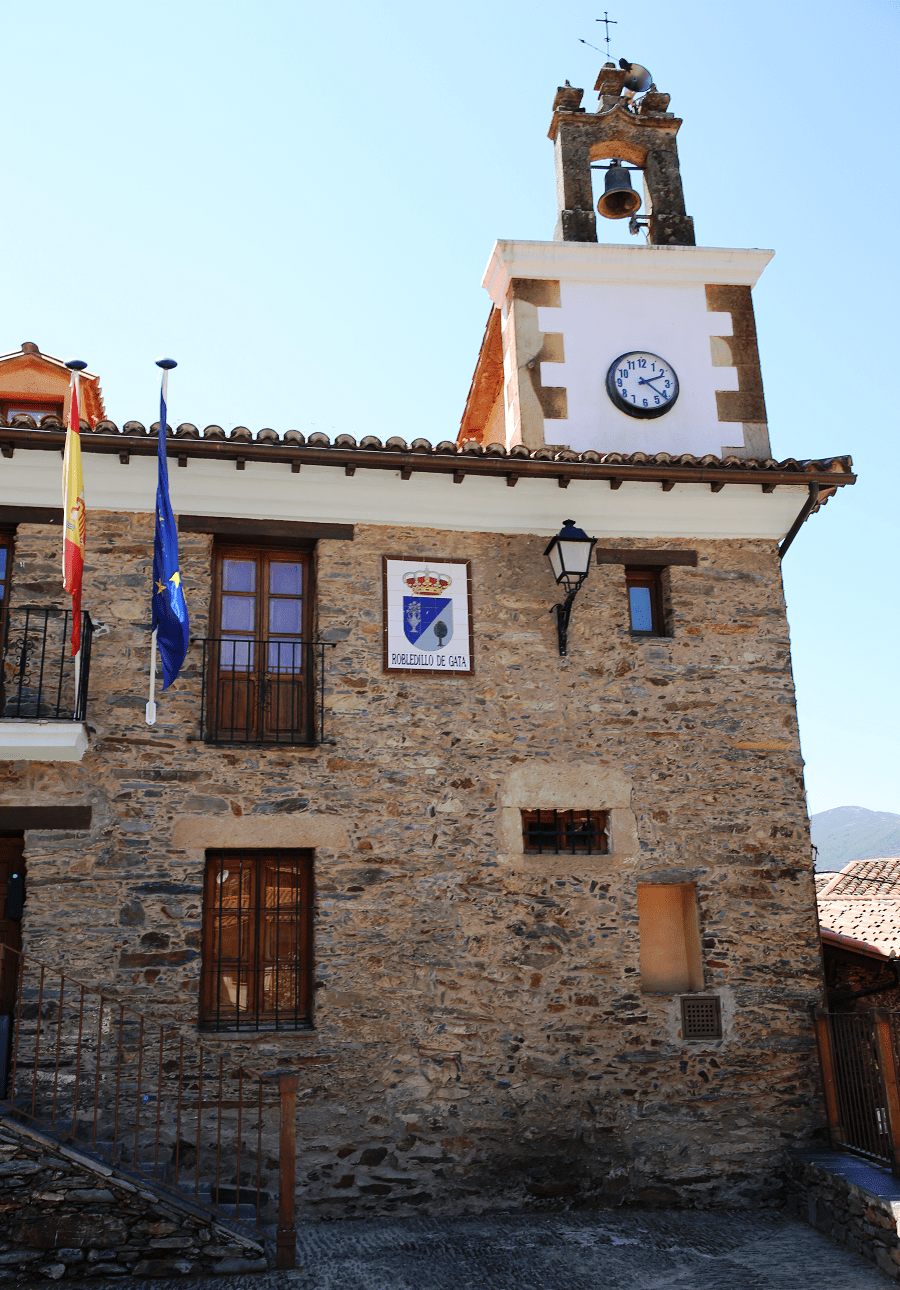 The town has a partial medieval layout typology, with a slow tendency to change. The functional typology is predominantly agricultural, also residential-domestic, and the building typology is of the popular type. 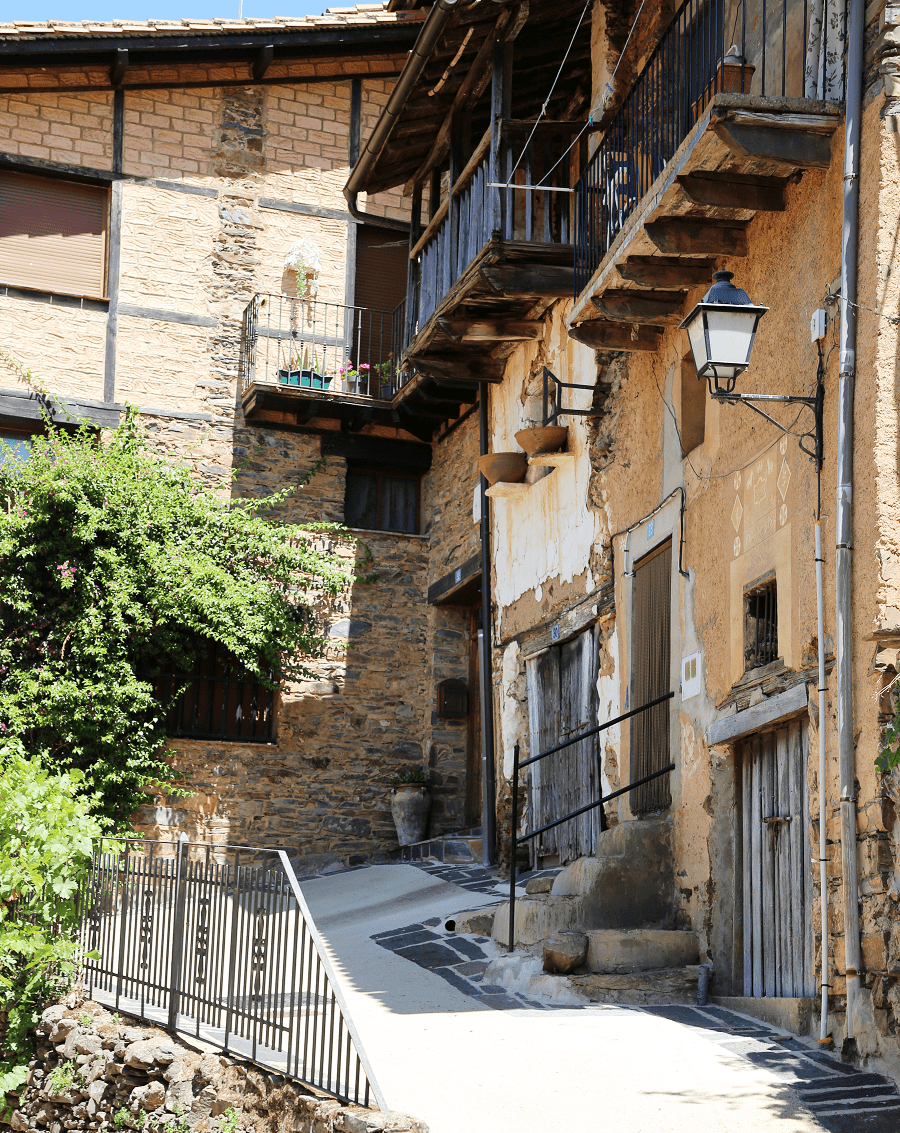 The layout of the town on the slope allows one to contemplate the staggering of houses and streets. 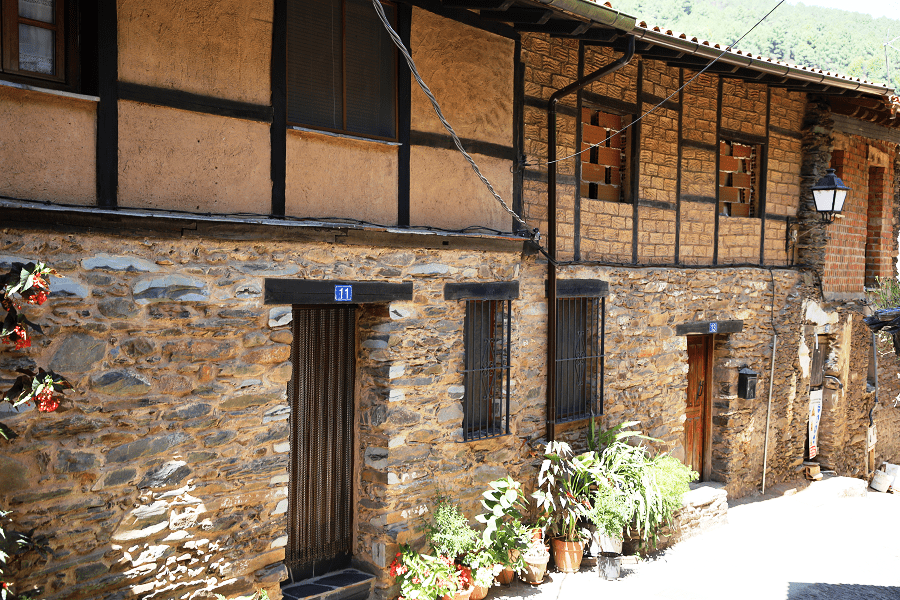 The town’s helmet is shaped like an elongated funnel, with its widest side in the southern part. The streets are steep, narrow and winding, some of them run under passageways or under the houses, forming small tunnels. In any case, this element gives the streets an interesting effect of lights and shadows. 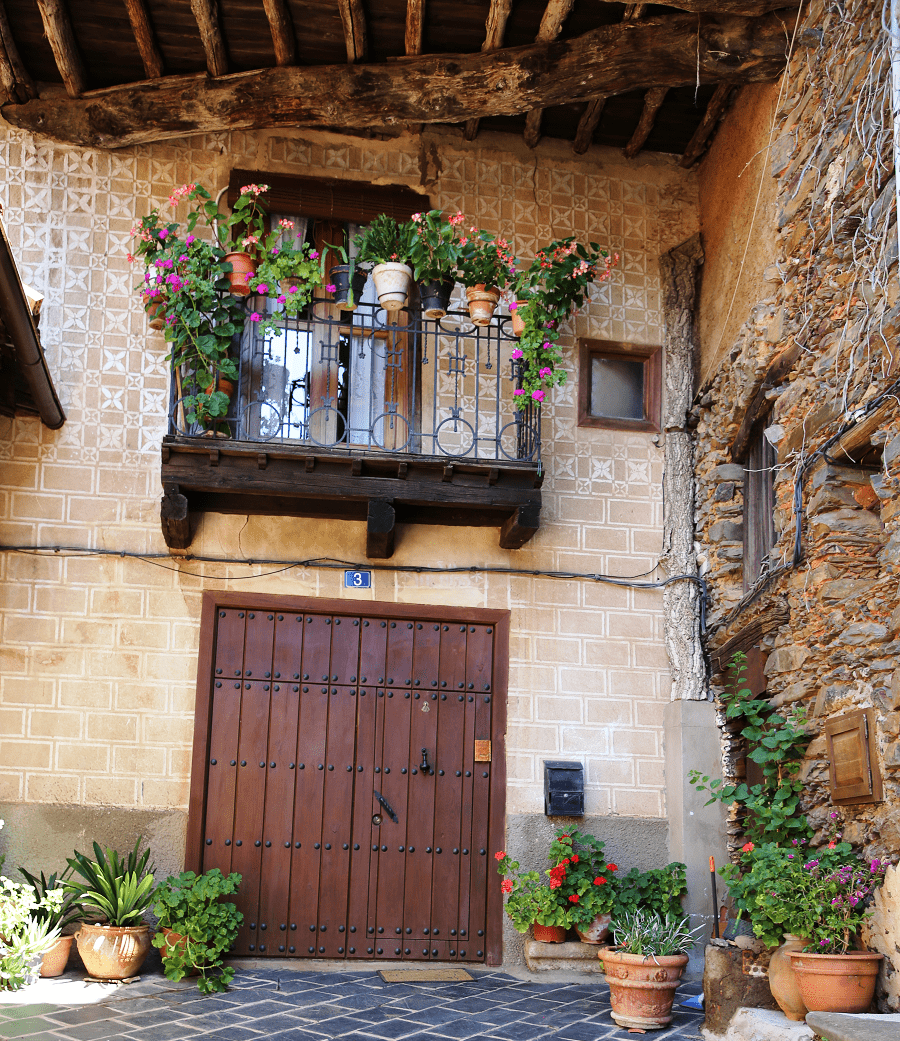 The houses present uniform characteristics. The walls are made of adobe, sometimes painted around doors and windows, generally in a natural color, producing an attractive ocher-sienna hue that is very characteristic of the whole city. 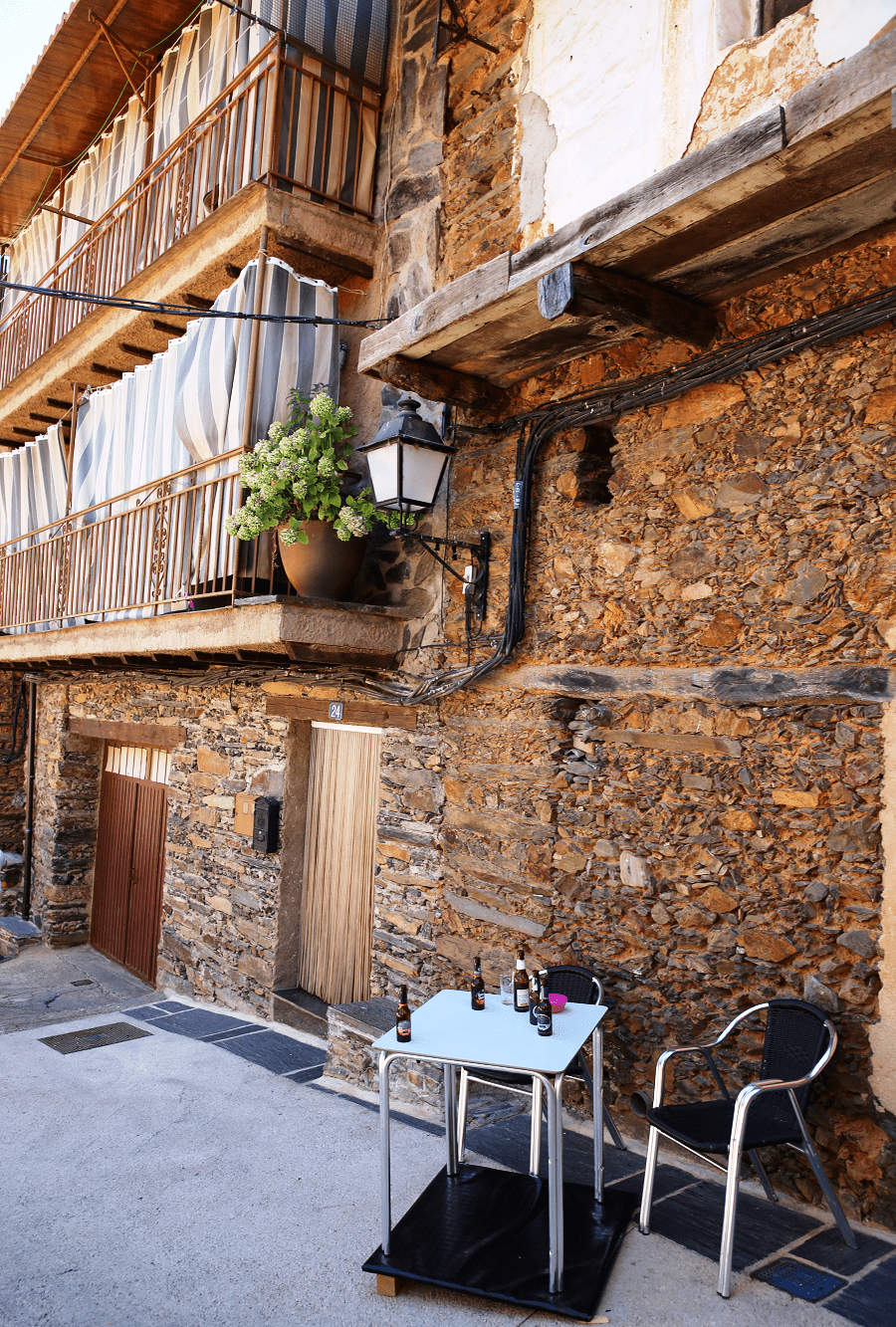 Other houses are made of very fine masonry, with slate slabs in the corners. Both solutions alternate with wooden framework, even reed on some adobe canvases.

As has been pointed out, the wooden eaves are usually very pronounced, so that in the narrower streets they join those of the opposite façade by making passageways; The eaves are supported by wooden canes without a special shape. 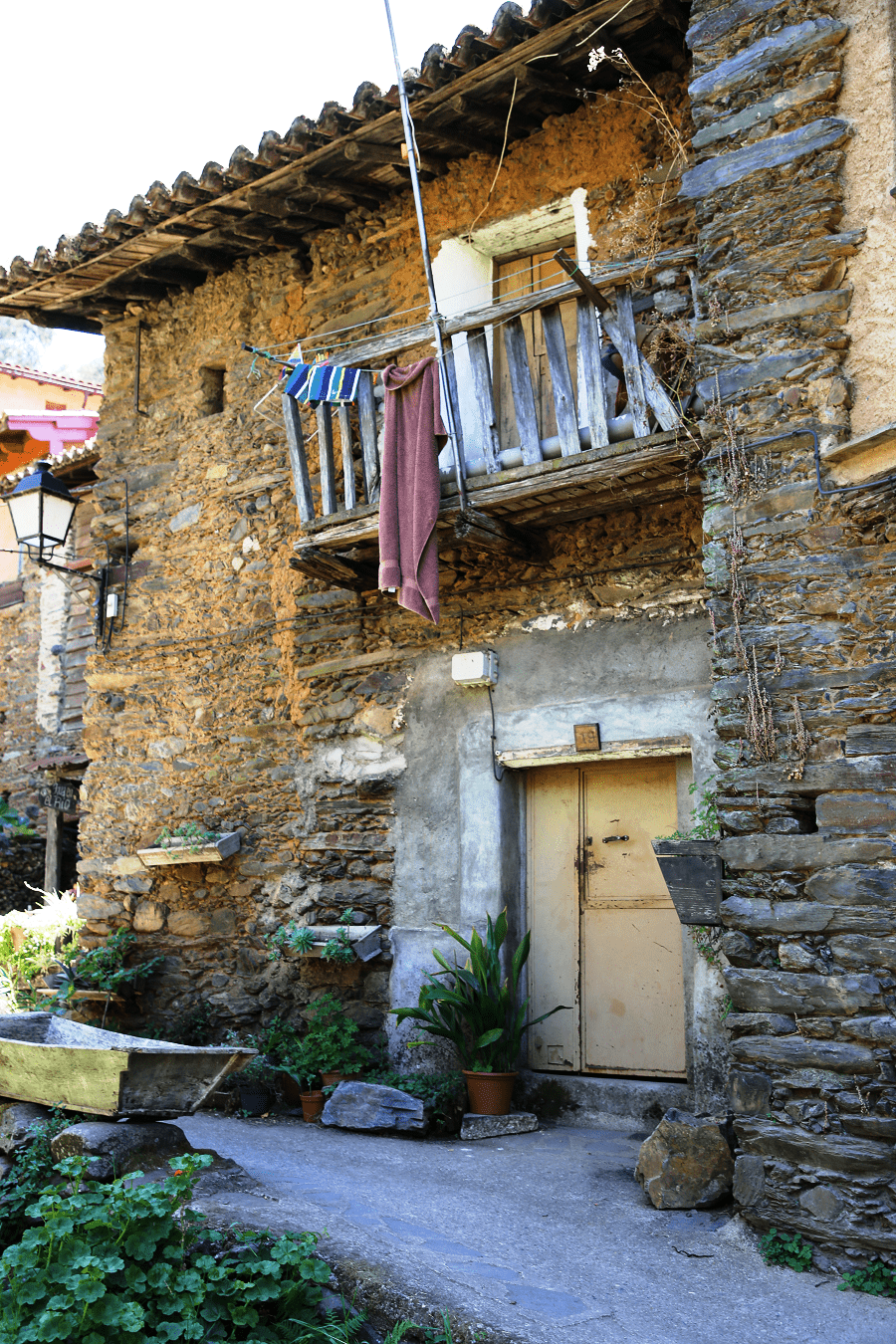 The houses have a continuous balcony, drying rooms and roofs with balusters and a wooden structure, supported in some cases on large wooden beams. The agricultural units are in the same house. 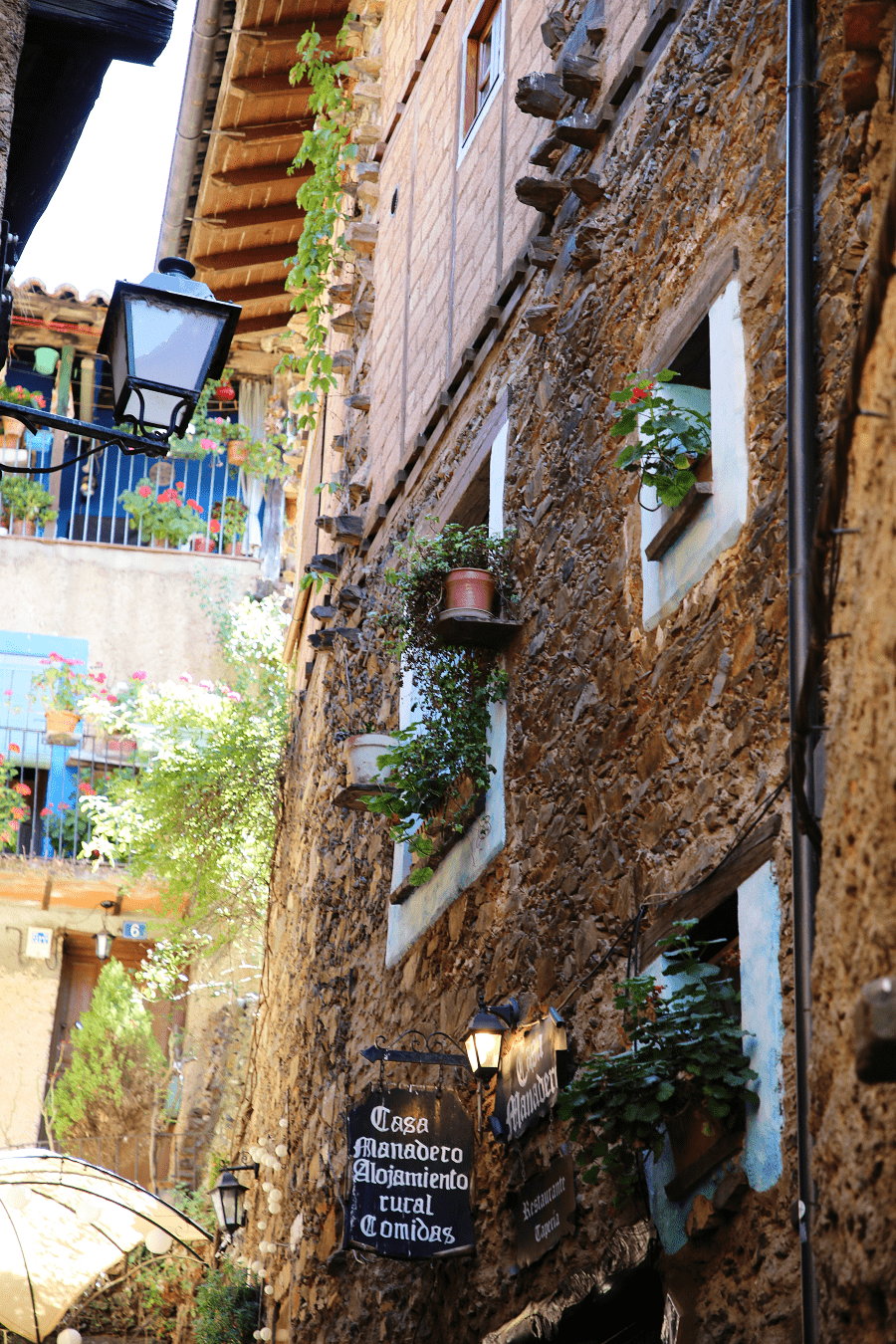 It is common to find corn drying on large balconies, an element that gives the whole a certain personality. The doors are lintelled, with wooden leaves, preceded by a few steps. The facade does not usually have many windows; These are flat and of small dimensions, with wooden beams as lintels, their surroundings being whitewashed. 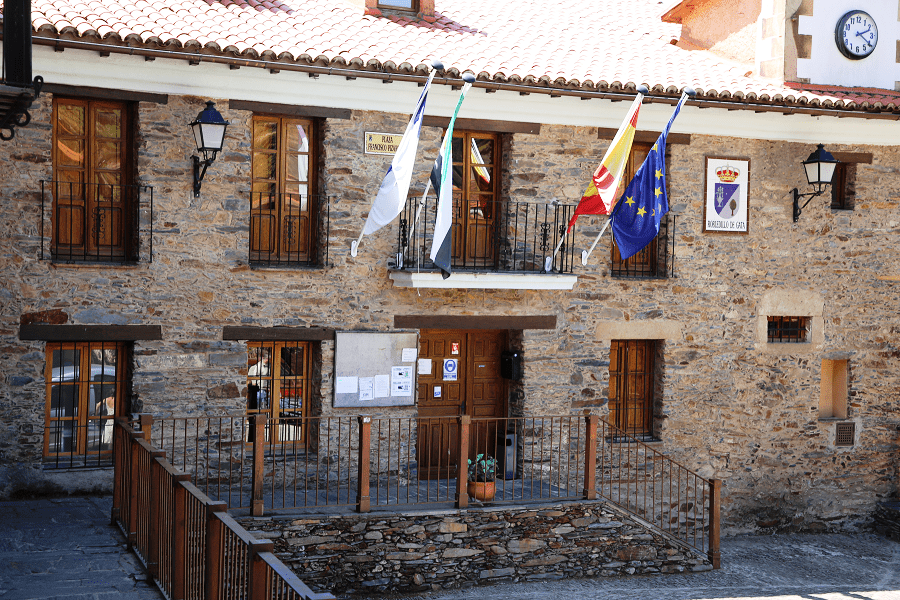 The second floor houses the house itself. The main room is the kitchen, around it the other units are located. The last floor is occupied by a double or attic and by the cantilevered balconies, covered and with a wooden balustrade; this top floor has hardly any windows. The roofs are gabled, quite long, covered with Arabic tile. 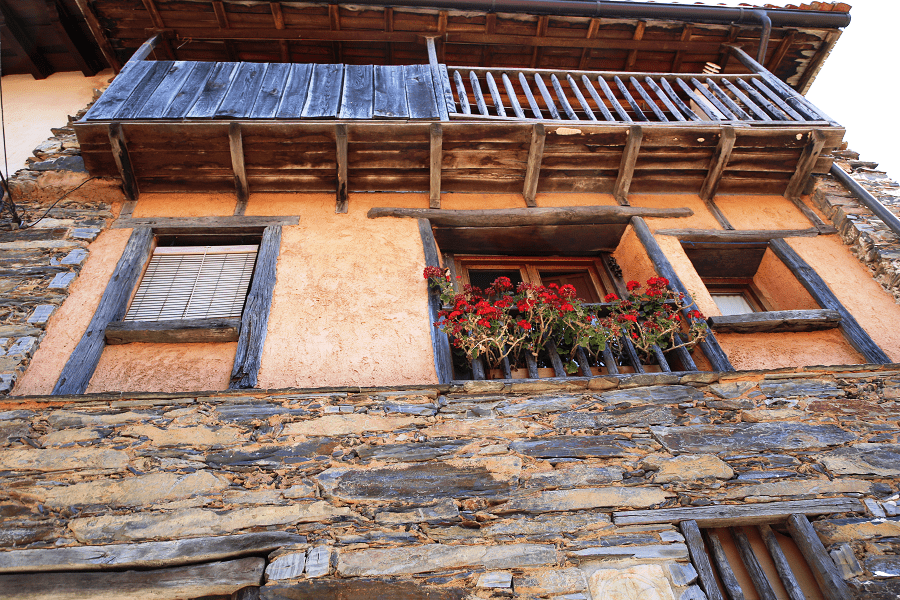 Regarding the religious buildings that make up the urban area, its parish church, dedicated to Our Lady of the Assumption, is a rectangular work of the 16th century, with a single nave, divided into four sections, covered by a wooden roof. The Mudejar roof of the sacristy stands out. The church depends on the parish priest of Cadalso in the Diocese of Coria-Cáceres. 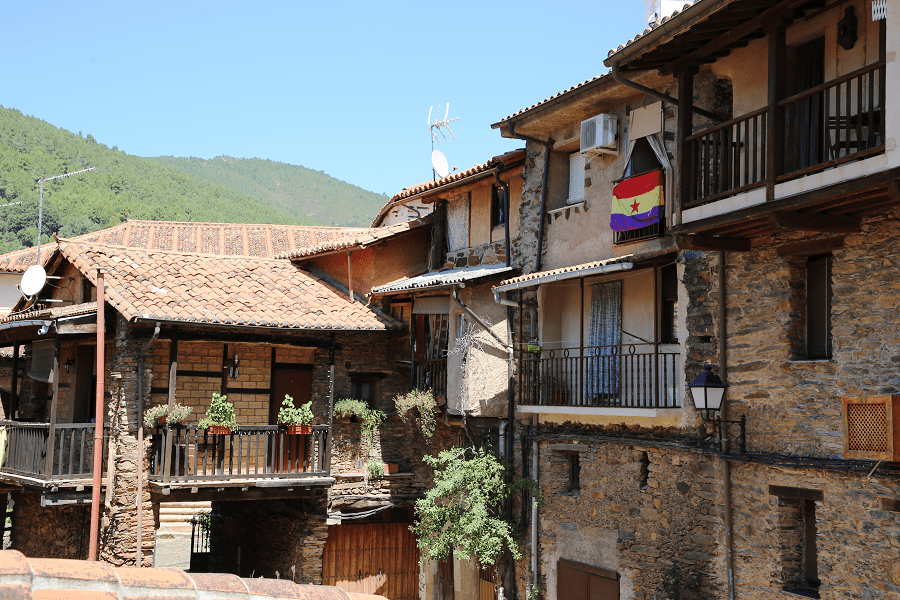 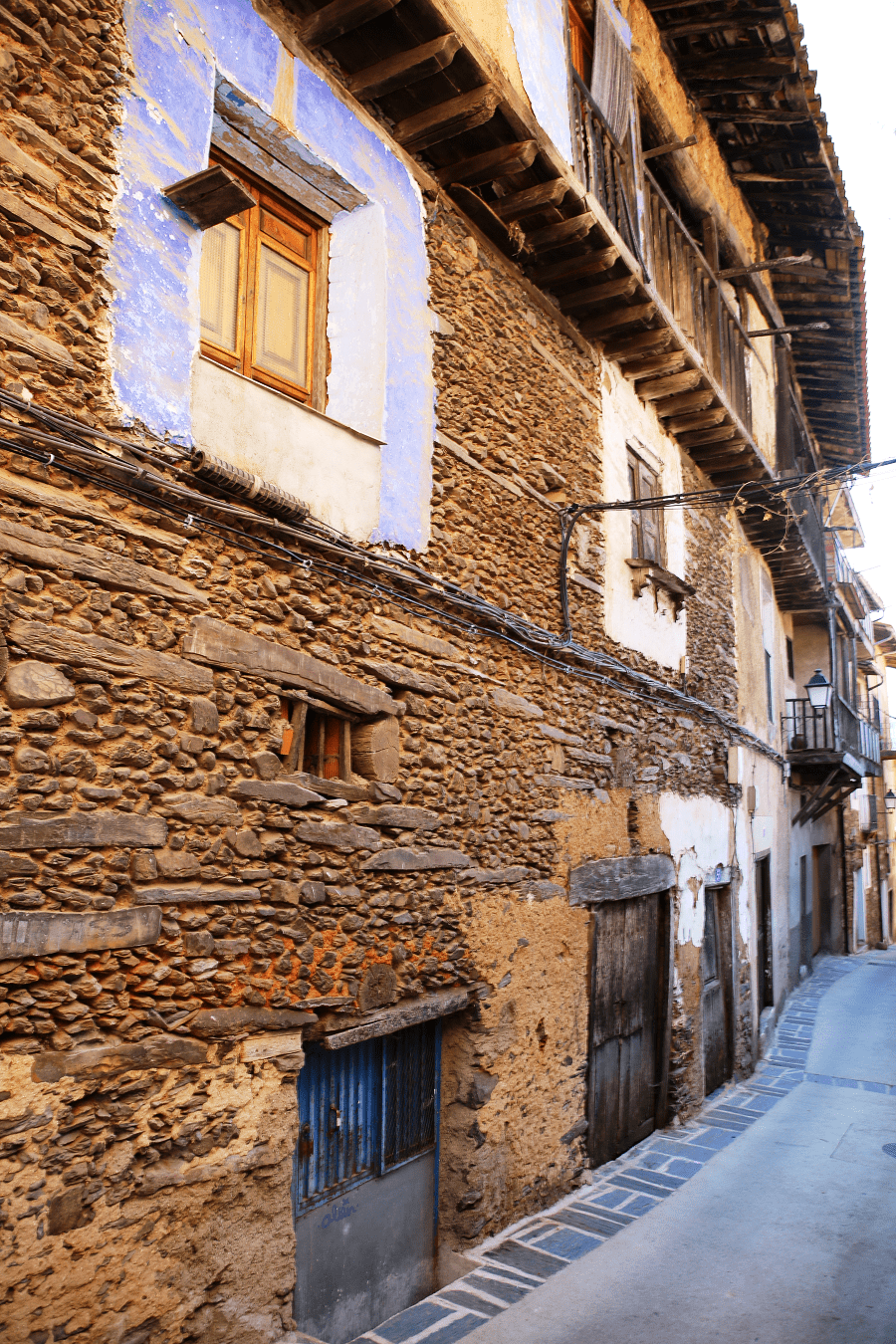 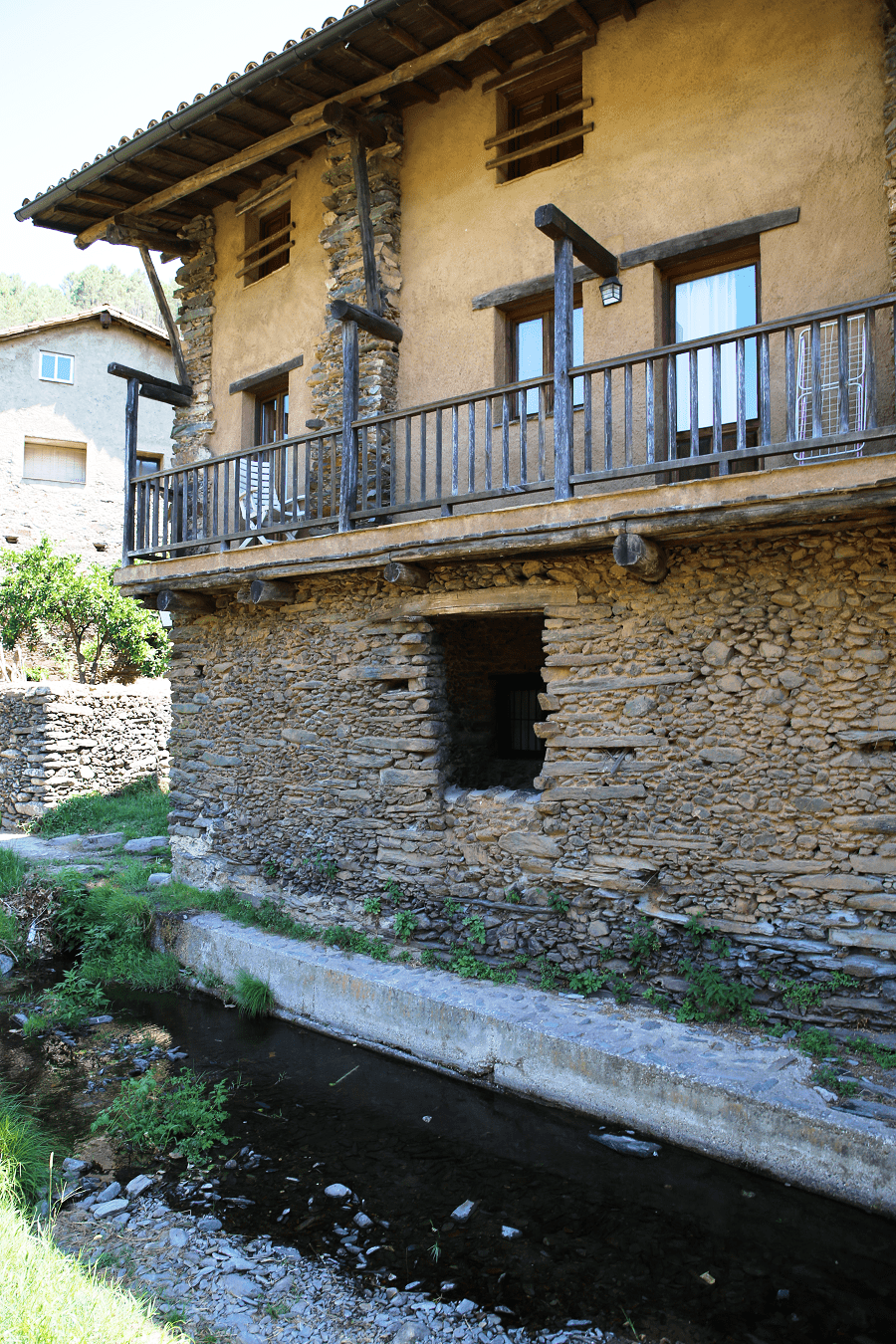 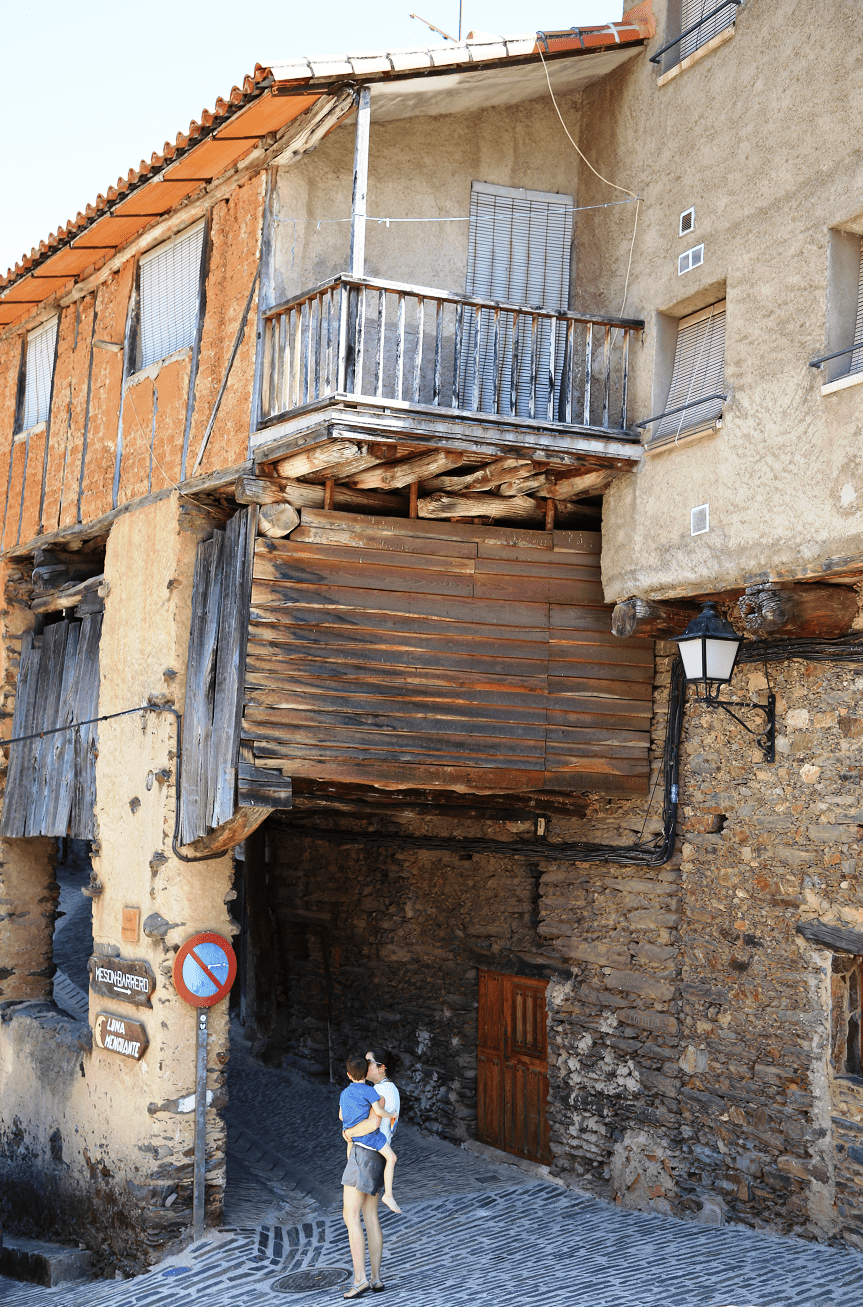