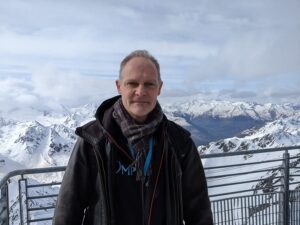 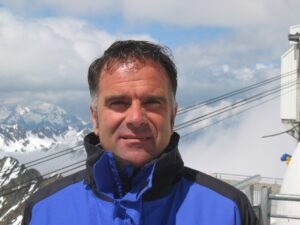 The Pic du Midi (2877 m) is a starry sky international reserve in France, less than 300 km from Andorra (Pyrenees). Researchers and astronomers have been observing, deciphering and photographing the sky and planets ofthe most distant galaxies in this magical place for over 140 years. The observatory is very close to the Greenwich meridian. Thus, astronomy – the science of celestial bodies – has become an excellent area for the Iberian region.

Heaven’s secrets and daily wonders that were once reserved for a few privileged scholars are now available for everyone. You just need to climb the cable car from Mongie town, the Grand Tourmalet ski resort center, – and you are at the top of 2877 meters above sea level after 15 minutes.

In addition, the Pic du Midi is an open observation deck, a planetarium, a restaurant, and a hotel, as well as a unique place for freeriding and climbing a glacier.

In a joint interview, Rémi Cabanac (R.C.), Scientific Director of Pic du Midi, and Daniel Soucaze des Soucaze (D.S.), General Manager of Pic du Midi, told us about how this place combines the possibility of scientific research and tourism entertainment.

What scientific significance does the Pic du Midi have today?

In aerology, studies focus on climate change, the impact of human activity on the troposphere, atmospheric chemistry, aerosols, monitoring of microplastics, radioactive elements and human-source pollutants, but also the electrical phenomena in the stratosphere with the observation of sprites.

Inland, we study the tectonic movements of the Pyrenean chain.

In ecology, we are working on the ECTOPYR project, a study of the ecological upheavals caused by climate change.

In addition, we provide training missions through research for university students and host scientific and technical missions that require technical support at altitude.

You observe the sun from two domes: The Jean Rösch telescope and the Coronagraph. What can you say about the global diagnosis of solar activity?

(R.C.) Solar activity follows a 22-year cycle, which is observed with CLIMSO: low corona and disc. The acceleration phases of particles from the photosphere (a few thousand degrees) to the crown (a few million degrees) are still poorly known. A new instrument, the largest in the world, is in the assembly phase (C3),which allows us to better understand these phenomena.

The Jean Rösch telescope no longer makes scientific observations of the sun. It is used for student training.

How will the observatory evolve?

(R.C.) Over the next few years, the new Dauzère-Soler building will accommodate researchers for scientific workshops at the summit, students for training, a centralized control room for the telescopes at the summit, an enlarged environmental platform, a computer room modern, a conference room for 40 people and 30 new beds.

Will there be new telescopes?

How much investment is needed to develop infrastructure?

What is the annual amount of funding for the Pic du Midi?

(R.C.) On the scientific side, the operating cost is comparable to the salary cost of 40 state agents, technicians, engineers, administrators and researchers. It’s around 2 million euros/year.

Do climatologists work at the observatory?

(R.C.) The Pic du Midi is an observation site. The climatologists of the OMP (Paul Sabatier University) and the IPCC use the climatological observations of the summit (temperature, humidity, winds, greenhouse gases) for their models of global warming.

What are the main scientific topics that the international climate community is debating?

(R.C.) This question is too broad to answer. At the Pic du Midi, we are interested in our origins (birth of the solar system). Is there life outside of Earth in the universe? How will the climate change in the next decades? How will animal species acclimatize? Can we predict the solar flares observed with the coronagraph? Is human-source pollution on a global scale increasing?

How do you coordinate work with other major observatories around the world, in particular with the neighboring Observatorio del Roque de Los Muchachos?

(R.C.) The observatories of the world form a complementary network that observes jointly or independently and sometimes in targeted campaigns. Observatories in the Canary Islands (Roque de Los Muchachos, Teide), Chile (ESO, CTIO, etc.), Hawaii (CFHT) and space missions (GAIA, HST, JWST, Corot, TESS, etc.) are used in conjunction with the TBL or T1M on follow-up campaigns. It depends on the requests of the scientific teams.

Do you cooperate with universities? Which ones? And do you accept internship students?

(R.C.) Scientific research has been a globalized job since the beginning of science. The universities are in constant contact. The Paul Sabatier University welcomes researchers from all over the world and the Pic du Midi welcomes observers from all over the world. French universities have astronomy training programs that use Pic du Midi equipment. Scientific observations in service mode rely on students.

Please tell us about the tourist infrastructure (restaurant, hotel). How many tourists visited the Pic du Midi last year? What cultural and sporting events are planned this year?

(D.S.) We welcomed more than 96,000 visitors last year, despite months of closure due to Covid. Note that in 2019, 139,892 people climbed the Pic. We offer our customers a real daytime experience with the Pontoon in the Sky, the Experiences Area, the Planetarium, the Astronomer’s Dome, and the augmented reality visit with the Histopad.

Every night, 27 privileged people discover the starry sky and the scientific installations.

We are eager to introduce the site to a wide audience andthis is why we organize concerts at the top. This year, we welcome Cock Robin, Lilly Wood andthe Prick or N’to to name a few. Success is on the way!

For winter, the Pic du Midi offers different lines of glacier climbing. Is this activity available for beginners? Is there a training service?

(D.S.) We opened a successful icefall last winter. Due to the notoriety of the Pic du Midi, the Pyrenees are a mecca for mountaineering. 25 meters long and 45 meters wide, the waterfall offers four different climbing lines. It is accessible to beginners provided they want to experience some sensations. This initiation is to be experienced with a mountain guide who provides all the equipment (helmet, crampons, ice axes, harness).

How do you plan to develop the site in the future?

(D.S.) From 2017 to 2020, the Pic du Midi experienced a tourist revolution with works worth €7 million. The objective is to give visitors a unique, unforgettable experience and to create real emotion.

Now it is the scientific side that is in full development as we have noted above. A scientific site lives only through the contribution of researchers who need it.

If the needs disappear, the site also disappears. The Pic du Midi seems to be useful to science for years to come and there is no shortage of development projects.

Listing the Pic as a UNESCO World Heritage Site would be one more step toward perpetuating the adventure of high-mountain observation.

(D.S.) Why not?! Film crews often approach us. We always try to answer them!