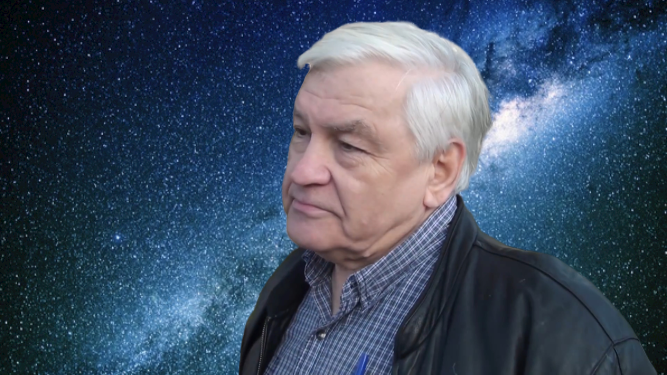 Member of the Commission on Pseudoscience and Research Fraud of Russian Academy of Sciences.

What is the modern physical picture of the world?

The scientific picture of the world began with Isaac Newton (1643-1727) and his laws of mechanics. He introduced absolute time and absolute space concepts. In Albert Einstein’s (1879-1955) theory of relativity from 1905, they turned into relative shadows of the absolute 4-dimensional world of events, which is split in different ways into one-dimensional time and three-dimensional space for observers with their different relative motion speeds. Paul Dirac (1902-1984) wrote equations for elementary particles with their internal 6-dimensional spinor space.

It turns out that we live in (at least) ten-dimensional space-time, the four outer coordinates commute with each other, and the six inner coordinates are anticommuting (and therefore have zero squares). In the Big Bang, 13.7 billion years ago, the single physical interaction was divided into strong interactions (that glue nucleons quarks as atomic nuclei particles), electroweak (two electrons in an atom interact 10 to a power of 42 times more according to the Coulomb’s law than according to Newton’s law of gravity), and gravitational. Electric charges have different signs, and gravitational charges (masses) are all non-negative in this case.

From the moment of conception to birth, it runs through the living organisms’ evolution from a unicellular to a multicellular organism and lives another 2-3 billion seconds. Our existence is proof of the fact that the Sun is a star of the second or third generation of stars: after all, the complex molecules of our bodies originated during a supernova explosion that glued protons in spite of the repulsion of their same sign electric charges.

If the Sun mass was several times larger, then it would not burn for billions of years, creating the Earth’s biosphere, but would explode like a supernova. At the same time, there is unbearable heat closer to the Sun (on Venus), and there is intolerable cold further (on Mars). However, there is a small zone of temperatures compatible with life (ecosphere) near each star. Thus, temperature limitation is a structurally stable phenomenon.

A whole series of conditions is necessary for the advent of life. As a result, the advent of intelligent life in the Universe is a natural and structurally stable phenomenon, but it is so rare that there is little hope of finding brothers in mind: it makes no sense to send information about yourself to nobody and for thousands of years to wait for an answer from unknown. And who said that other possible civilizations are our brothers, not enemies?

Why do you think that scientific knowledge development is linked to the risk of new losses?

A human being, as part of the biosphere, is primarily an instinctive creature and only secondarily a rational creature. When the resources of a person, his family, people groups, countries, groups of countries decrease below a certain critical level, different for various subjects, the mind begins to work more on the justification of the instinct of survival at the expense of others, than on upholding the intellectual honesty position. This position implies a transition from superficial truth to a profound truth. According to the thought of one of the modern science creators, Niels Bohr (1885-1962): profound truth is such a truth, the negation of which is a profound truth also.

In particular, life greatness is compatible with its deep tragedy. This tragedy is already connected with the fact that the intelligent life outbreak on some planet of the Universe is a short-term phenomenon. This raises the question of understanding the human being’s place in the world around him and the structure of this world itself.

According to observational cosmology, there are about two hundred billion galaxies in our Metagalaxy, each of which has about two hundred billion stars and an order of magnitude more planets (about 10 to the power of 23). The physical world dynamics are determined by the extreme action principle. For example, if we summarize all paths with a fixed beginning and end, then we get a straight segment: all deviations in one direction will be compensated by similar paths with deviations in the opposite direction, and the shortest path only will survive.

But the world does not have a predetermined single developmental path over time: it is an ocean of branching possibilities; moreover, something depends on the choice of each person in the world, which imposes responsibility on each person for their choice. Reason with its ability to understand and comprehend, acting as a superstructure over instinct, as a rule, suggests to a person, not a spontaneous but rather a reasonable reaction to various events.

What is the role of the evolution laws in the modern scientific picture of the world?

The terrestrial biosphere emergence is a structurally stable, natural, albeit extremely rare phenomenon. The biosphere itself is the food chain pyramid. The source is solar radiation, which created vegetation on Earth and then animals, from unicellular to multicellular. Life can be defined as a streamline (in the language of physics – negentropy), provided by self-correction of the hereditary code under the condition of the free energy influx (R. F. Polishchuk, in Fundamentals of Life, Paris, 2002, p. 141-151).

We know that entropy is growing in the world as a measure of chaos. How could negentropy originate? It originates due to the Sun low-entropy radiation, crowding out entropy from its vicinity at the cost of its total increase. The sun loses 4 megatons of its mass-energy every second due to radiation, of which one two-billionth part (2 kilograms) falls to Earth.

According to the star evolution theory, this will continue for about five billion years. The sun will explode then, turn (in the terminology of astronomers) from a yellow dwarf into a red giant. Earth and Mars will be inside it, a plasma density of about 1000 degrees will be 1000 times less than the air density (and a million times less than the water density).

About 60 million years ago, an asteroid fell to Earth in the Gulf of Mexico, which led to the extinction of dinosaurs and the multiplication of mammals, which we belong to. About 30 kg of interplanetary matter falls to the Earth daily, but large bodies fall on it extremely rarely.

The biosphere division into predators and prey is an invariant of its evolution. Consider a simplified diagram of the relationship between the numbers of hares (they feed on grass) and wolves (they feed on grass, converted by hares into hare meat). If hares breed without wolves they will eat all the grass and die of starvation. However, if the wolves eat all the hares, then they themselves will die. Hares breeding causes wolves’ number increase and the hares’ number decreasing. This decrease, in turn, leads to the wolves’ number decrease, as a result of which the hares’ number increases.

The Lotka-Volterra equations describe a periodic change in the predators and prey number with a natural phase shift (in time). Of course, there may be a case of the entire system’s death, when the predators or victims number crosses the acceptable boundaries. In society, we have its division into politicians and direct producers of vital principles.

The right policy creates normal conditions for the activities of most people that benefits the whole society.

Moreover, society should be understood as absolutely all citizens, without exception – politicians, military men, workers, children, the sick, and so on

The synergetics law applies in the biosphere (see D.S. Chernavsky, Synergetics and Information (Dynamic Information Theory). M: URSS, 2004, p. 100). A multistable information system consists of various information carriers, and the lifetime of each information type is less than that of the entire system. The rate of change in the number of each type of information carriers depends (with a plus) on the auto-reproduction coefficient (without the other members, their growth is exponential), the diffusion coefficient over the territory, and (with a minus) on the coefficients of internal and external confrontation. These equations describe humankind’s evolution from many tribes (settled and nomadic) to many states with a change in their numbers and borders. When applied to European geography, its political map was obtained.

From D.S. Chernavsky himself (1926-2016), I learned that in World War II (1939-1945) simulation, an option was obtained where Moscow was lost. Then the coefficient of the Soviet people’s internal confrontation was changed in the mathematical model (the coefficients were set based on common sense), and it turned out that the Russians took Berlin. There was the First World War (1914-1918) before the Second World War. The Versailles Peace Treaty of 1919 stood out for the unjustified greed of the winners in relation to the conquered, which brought the world into a temporary (20 years) truce.

According to Chernavsky’s equations, social evolution has two attractors (attracting sets): authoritarian (the general good is higher than the personal, power sacralization, clusters and class competition) and liberal (the personal good is higher than the general, power desacralization, individuals’ competition). The order parameter is the resources’ amount for each cluster. In Russia with its permafrost and long roads after the catastrophe of World War I socialism was established. Another authoritarian attractor different from socialism was fascism in Germany.

The resources accumulation after 1945 and the uneven development of various regions led the Soviet Union to collapse in 1991. While Ukraine continues to disintegrate in front of us. However, it does not have the resources that Germany possessed in 1939, so its future is only in alliance with Russia. The weakening that the USSR has gone through is experienced by the United States today, lacking the resources to control its European and other allies.

Humankind has already realized the mortal danger of the use of mass destruction weapons for all life on Earth. The future will force humankind to new forms of consolidation. There were two forms previously: one was the influence spread through the weakening of the enemy, the other was the transformation of former opponents’ into new allies. In this sense, Russia’s strategic alliance with China and Turkey (even though it had serious military conflicts with them) is a movement in the right direction. After all, the society evolution laws are a special case of the entire biosphere evolution laws.