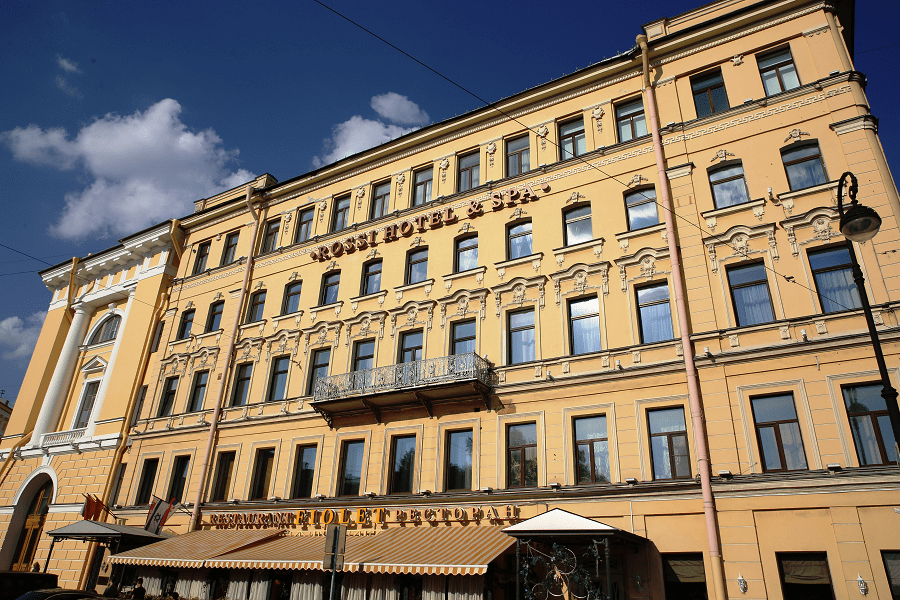 The Profitable house of the Vetoshkins in St. Petersburg (the building on the corner of the Fontanka Embankment and Chernysheva Square, now Lomonosov Square) has been known since the 1830s. It was a three-story stone house of Mrs. Zhilina, the official’s wife. It hosted the hotel “Europe”, one of the oldest in the city.

In 1832–1834, during the creation of the famous ensemble of the Alexandrinsky Theater and Theater Street (now Architect Rossi Street), architect K.I. Rossi intended to include in the ensemble the site with Zhilina’s house, but this did not happen. Probably, the directorate of the imperial theaters could not agree with the landlady and buy the plot.

From the middle of the 19th century until 1917, representatives of the Vetoshkin-Polezhaev family of merchants owned the house, and their fruit shop was also located here. In 1863 I.M. Vetoshkin rebuilt the house according to the project of the architect R.E. Bergman. Basements appeared in the house, from the side of the Fontanka and Chernysheva Square the building became four-story, and the courtyard buildings were built up to five floors.

In 1901, by order of the new owner – S.N. Polezhaev, a relative of the Vetoshkins, architect P.I. Gilev added another floor to the house and redid the interiors.

The main tenants of the Vetoshkin-Polezhaev apartment building were artists from the nearby theaters – Alexandrinsky and Maly (now the BDT named after G.A. Tovstonogov). The most famous resident of the house was Ekaterina Pavlovna Korchagina-Aleksandrovskaya, People’s Artist of the USSR, who settled here in 1915 and lived until her death in 1951.

Since 2005, the Rossi boutique hotel & SPA (4****) has been located in the building. The new owners did their best to preserve the old interiors. In the course of the work, the stucco decoration in many rooms was cleared, ancient fireplaces and stoves, two safes from the San Galli company, an old cash register and even one of the heavy metal hooks of the former stable were preserved. Two rooms on the second floor amaze with their interiors. The entrance doors of one of them are decorated with stained glass windows in the Renaissance style. In both rooms, the walls are covered with oak panels with decorative wall shelves.