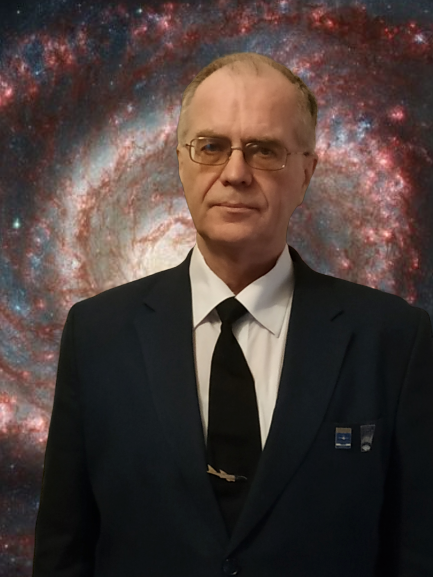 His last publication is “Introduction to the Anisotropic Geometrodynamics”, published by the World Scientific in 2011.

He suggested the gravity theory, also known as anisotropic geometrodynamics (AGD). This theory can work without the dark matter concept introduction in interpreting the rotation curves of spiral galaxies, explain the empirical Tully-Fisher law, and also remove a number of other problems in interpreting of observations on a cosmological scale.

He is currently developing metric dynamics, a geometric approach based on the Clifford ideas, aimed at the mechanics of axiomatic construction, not related to the force fields concept. They use physical reality modeling with the help of anisotropic space instead. This allows, on one hand, to use the new language for the interpretation of mechanics and electrodynamics observations, and on the other hand, to overcome a number of quantum mechanics paradoxes.

I have repeatedly visited your presentations, and they always aroused the audience interest, questions and discussions. Why?

Possibly, because, at conferences, I seek not so much to report on the results obtained, as to convey to the listeners the inevitability of questions, the answers to which they are.

Of course not. There are many questions, they are different and of different generality degrees and there are even more different approaches to the answers. It is very difficult to find a question, and the answer, which is interesting and understandable to everyone or at least to many people. Most researchers quickly go into a narrow area, and there they “stew in their own juice”.

Are you specifically looking for such questions that may be of interest to many?

No, I also start with a specific problem. But it turns out that instead of looking for its solution, I am looking for where it came from. And after a few steps, the inevitable question appears. Sometimes it touches the appropriate theory basics.

You can start changing the basic, because of every problem …

Well, first, I see my task as holding the foundations or strengthening them, supplementing and expanding them, and second, not every problem requires it or is worth it.

How, then, are we to make a scientific revolution, if we strive to retain the foundations?

One must strangle it in the bud or head it, but only when all other means are exhausted. And the need for a revolutionary situation has not been canceled.

Your activity, as it were, refers to a “new physics”, the appearance of which everyone is awaiting impatiently. Please tell us what is the “inevitable question” and what exactly are you doing? By the way, what particular problem did you start with?

A detailed answer will take a long time, and you can simply find my presentations on the web (in Russian and English) on the website https://siparov.com/ and https://www.youtube.com/user/SergeySiparov. In a nutshell, it went like this. I learned about flat rotation curves in spiral galaxies; there were observational data that served as the basis for the “dark matter” concept introduction.

The theory required that the curves tend to zero, but they came out on the constant. Having examined the details, I came across a contradiction: the Tully-Fisher law (and its analogue Faber-Jackson law), which also follows from the observations, does not include this dark matter. It is not about it. Observations are reliable, theory remains. The theory is the relativity theory, which, although people who are not familiar with it, attack it, remains one of the modern science unconditional pillars along with the quantum mechanics. It has both deep meaning and success in various observations descriptions. Its meaning is that the movement under the action of gravitational forces is indistinguishable from the movement under the action of inertial forces, if the latter occurs along the corresponding curve.

Inertial forces can also depend on speeds, which, in the general theory of relativity, appears only in the following decomposition order. If we take into account the speed immediately and explicitly, then the original equations will change. It turned out that the change is just so that the theoretical rotation curves become flat. Moreover, the Talley-Fisher empirical law now follows from the theory. Furthermore, this approach predicts the Hubble’s law, the discovery of which was also the observations result. There was the belief that it confirms Friedman’s idea of the Universe expansion, but now it simply indicates the presence of rotational structures of different scale in the Universe.

It looks impressive. Can you describe anything else using this theory?

Well, there are a dozen and a half different consequences from the observations. Some of them are now explained with the help of classical GR, some with dark matter, and some are not explained at all.

Is it possible to test this theory with the help of such observations that have not been carried out yet?

Good question! It is not an easy one, since we must made observations on a galactic scale. The answer is “yes”. We conceived, calculated and carried out such an experiment, and publish the results. https://blog.oup.com/2017/07/radio-telescopes-gravitational-waves/

Its essence is as follows: gravitational waves from regular sources such as cramped binary stars should propagate differently along and across our galaxy plane – precisely because of the speed of sources moving around the galaxy center.

This data indicates the need to modify the theory. We proposed the OMPR effect (optometric parametric resonance), with the help of which one can record such waves using a conventional radio telescope, and then we made observations at the Pushchino Observatory of the Russian Academy of Sciences. Everything works. The problem is that we need plenty of observations to collect the necessary statistics. We are waiting for somebody to join us.

What does all this mean in the sense of “new physics”?

I cannot say that it is totally new. The idea of the physics geometrization was popular at the beginning of the 20th century, and Einstein engaged in it until his death. They followed another way, trying to match certain entities or physical fields to geometrical objects. Now we are talking about the phenomena description equivalence, both with the help of physical fields, and with the help of the necessary geometry selection. That is, not entities appear, but a way of description.

But it is still promising, as it involves new mathematical ideas in the physical theory. By the way, it works in the microworld. It also has its own paradoxes, like the wave function that Schrödinger introduced, completely breaking with Bohr’s “old” quantum mechanics. Now it turns out that we can also describe the experimental results “classically” if we use the geometric approach. Instead of the Schrödinger equation another one will appear that also works.