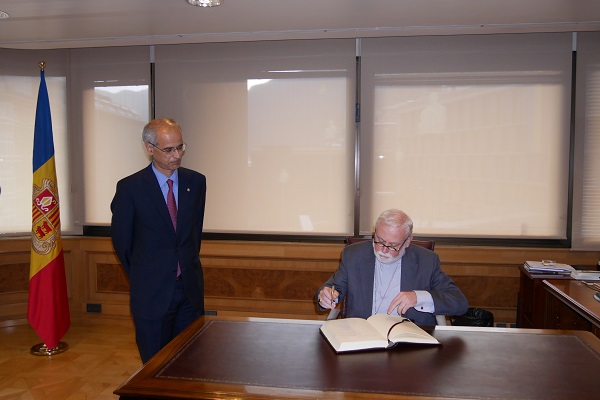 Archbishop Monsignor Paul Richard Gallagher, Secretary for the Holy See of Vatican, visited Andorra. In the framework of his official visit he met the Prime minister of Andorra Antoni Marti. This is the first visit from one of the highest Vatican authorities to the principality.

The Archbishop’s visit was dedicated to the day of the Saint patron of Andorra, virgin Meritxell, and also coincided with the 40th anniversary of the Meritxell church. The gala event on 8 September was also visited by the co-Prince of Andorra, Bishop Joan Enric Vives, Bishop of Urgell.

“Excellent relations” between the two countries was noted at the meeting. Diplomatic relations between Andorra and Vatican were established in June 1995. The concordat, which brought together the people of Andorra and the Holy See, was signed in 2008.

The Archbishop of the Vatican held a working meeting with the minister of Foreign affairs Gilbert Saboya. The sides discussed political issues, particularly Andorra’s negotiations with the European Union.