Andorran FM took part in the meeting with the ministers of Foreign affairs from countries - the members of States of the OSCE • All PYRENEES · France, Spain, Andorra 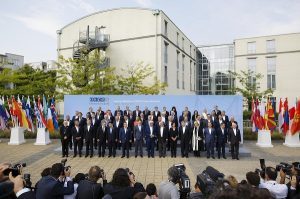 The Minister of Foreign affairs of Andorra, Gilbert Saboya, took part in the meeting with the participation of ministers of Foreign affairs from 57 countries – the members of States of the organization for security and cooperation in Europe (OSCE). The meeting was aimed at promoting dialogue on security issues which affects all States equally.

The debate, in particular, was devoted to the issues of migration, terrorism, extremism, violence, radicalism and cyber crime, as well as the OSCE role in these conflicts resolutions.

Gilbert Saboya emphasized in his speech the need for a united fight against terrorism and extremism. Speaking of migration, the minister stressed the commitment of Andorra to the policy of accepting refugees from Syria (agreed with the European Union), noting the transparency of the principality and the willingness to cooperate in the field of economics and taxation.

The meeting had the status of preparatory activities – December 8-9, 2016 in Hamburg will host the meeting of the OSCE Ministerial Council at the highest level, where decisions and strategies on the designated topics will be made.
During the last meeting, Gilbert Saboya had the opportunity to hold bilateral meetings with his counterparts from Portugal, Slovakia, Germany and Iceland on issues of mutual interest.