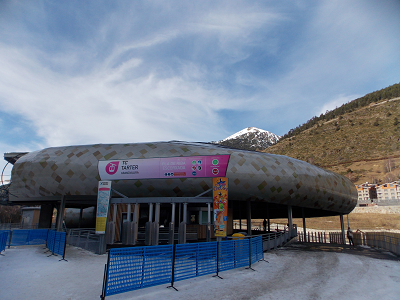 On 15th December the ski resort of Andorra Grandvalira held the official opening ceremony of the new cable car in sector El Tarter, Canillo. Modern building with total area of 2500 square meters includes several relax areas, a separate enclosed area for VIP clients, a café, office space, office of the ski school, ticket office, and storage space for ski equipment and a medical centre. The building was constructed in record-breaking short terms – for five months. The volume of investments is estimated at 4 million euros.

El Tarter is one of six sectors of Grandvalira. It is most popular among skiers because of a huge parking near the lifts. According to statistics, 25-30% of skiers prefer this sector.

“The opening of the cable car is another step towards our clients, because now the access of skiers to the slopes is significantly simplified,” – said the mayor of Canillo, Chairman of the Board of Directors of Grandvalira ENSISA (owns 51% of Grandvalira resort) Josep Mandicó.

As was explained by the head of integrated management system of Grandvalira ENSISA Victor Terrace (Victor Torres), one of the innovations of new infrastructure – the ability to pre-order via Internet ski equipment. “You will be sent an electronic code and the section number in which your booked equipment is stored. This will save time for a client not to spend time in the lines at the rental counters”, he added.

The General Director of Grandvalira ENSISA Conrad Blansh recalled that over the past 20 years the company has invested in the infrastructure of the ski resort at least 150 million euros. The cable car to El Tarter sector was opened over 10 years ago.

The event was attended by Minister of culture, youth and sports of Andorra Olga Gelabert, and shareholders of Grandvalira ENSISA – representatives of the administration of Canillo and Crèdit Andorrà bank, as well as numerous guests from the political, economic and sports organizations of Andorra.