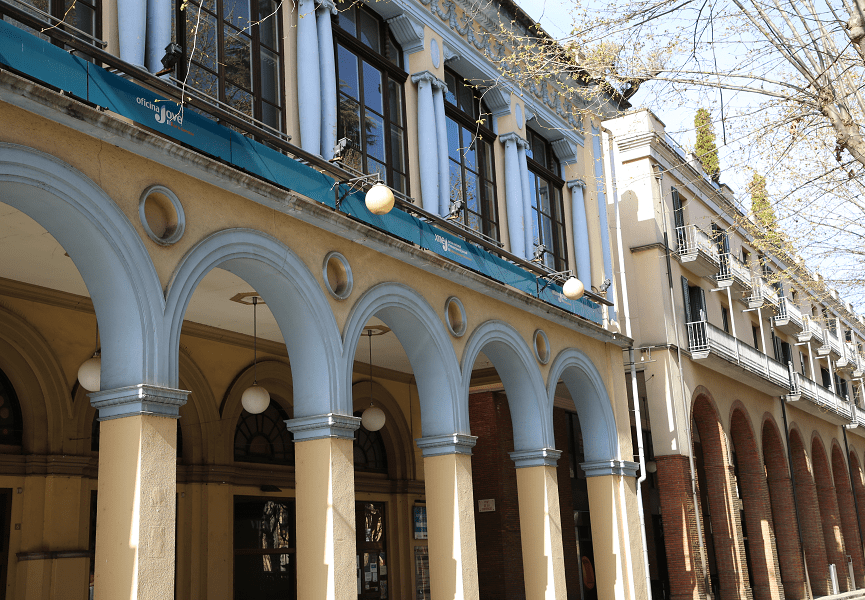 Olot (cat. Olot) is a municipality and city in Spain, Catalonia, the capital of the Garrotxa region and the judicial district of the same name. This city is especially famous for its natural attractions and, in particular, for the fact that it is surrounded by the natural park of the La Garrotxa volcanic zone.

The city is a member of the European Landscape Network.

It is located in the center of four volcanoes: Montolive, Montsacopa, Garrinada and Bizarokes, and is also the only capital of the County of Catalonia located inside a natural park and, as noted above, one of the volcanic zones of Garrotxa.

The municipality of Olot has a rich natural and landscape heritage: pedunculate oak forests, large-leaved oak, beech and stone oak groves, numerous springs, the Battet Basal Plateau and the Croscat volcano with its last eruption in the Iberian Peninsula. The extraction of chalk allows us to observe its internal structure today.

In the ninth century, the medieval town of Olot developed around a Romanesque church located on the site of the current sanctuary of Tours. Earthquakes of the 15th century destroyed most of the city, the wall was rebuilt from the outside, and all streets converged in the Plaza Mayor.

Today, the old town is the main shopping center where you can find everything from centuries-old shops to modern multi-brand boutiques. It also hosts most of the city’s cultural and holiday events, including the Festes del Tura, which takes place around 8th September and is of national importance. Other events include the Fira del Dibuix on 18th October, el Lluèrnia, a festival of fire and light, and Shopping Night, a large shopping festival held in mid-June.

Hospice: A building designed by Ventura Rodriguez in the late eighteenth century for charity. At different times, it had many applications: the market, the school of fine arts, the museum.

The courtyard of the old monastery of Carme (Claustre de l’antic Convent del Carme) is included in the list of cultural values ​​of national importance and is one of the few monasteries of the Renaissance that have survived in Catalonia. Designed by Llàtzer Cisterna in the 16th century, it has an irregular square plan and consists of two floors that correspond to the classical order.

At the beginning of the twentieth century, the first urban plan of the city was drawn up by the order of Alfred Palusi, a city architect who introduced the principles of modernism that he knew firsthand from Barcelona.

Casa Pujador: Located in Plaça del Conill, it was commissioned by Josep Azemar. The facade is made of chipped stone and has a rounded corner. It is crowned with a cylindrical tower, has a floral ornament, and its balconies are wrought-iron curves, made in the “coup de fouet” style. Inside this building – a century-old shop – you can admire a magnificent stucco ceiling.

Casa Escubós: Located in Plaça del Conill, the building was designed by Palusi in 1905. Ornaments framing the openings stand out. It is a house with three pale green facades. The openings of the balconies and windows are decorated in their upper part with glazed ceramics (floral decorations).

Side façade of the Church of Sant’Esteve: work of 1905, made of yellow Valencian ceramics and decorated with green crosses. Of note are the ramps decorated with typical modernist installations.

Casa Solà Morales is located on Passeig de Miquel Blay. Luis Domenech y Montaner designed the reconstruction of the façade to combine two buildings into one house. Two caryatids are the work of the sculptor Eusebi Arnau.

Casa Gassiot: Located on Carrer de Sant Rafel, the building was built by the architect Palusi in 1911. The main façade features an ornament on the balconies and a large allegorical sculpture.

The Museum of La Garrotxa (Museu de la Garrotxa) owns the painting by Ramon Casas “Burden”, as well as the work of the modernist sculptor Michel Bley. Other painters and sculptors on display at the museum include Joaquim and Marian Vireda, Josep Berga y Boy, Clara and Leonsy Coera.

The museum houses the original modernist posters of the tobacco house Cigarrillos París.

Olot is a city of artists. Olot’s museums tell the history of the region from different angles: art and landscape, science and nature, crafts and entertainment.

Casa Museu Can Trinxeria captures the atmosphere of an 18th century manor house in Olot.

The Museum of Saints Olot (Museu dels Sants d’Olot) contains the works of the workshop of religious images, created in 1880.

The Volcano Museum (Museu dels Volcans) tells about the history of the volcanoes in La Garrotxa and their varieties. In addition, it contains documents on the aftermath of the earthquakes that destroyed the city in the 15th century.

The restaurants of the Cuina Volcànica Group represent, defend and promote local cuisine and use products grown and handcrafted only in the La Garrotxa region.

In November, you can taste traditional menus at various restaurants in the region. Alternatively, you can enjoy a traditional gastronomic show dinner offered by several restaurants in one location in the city in the form of an exclusive menu of dishes created especially for the occasion, using only local products.

Several summer food tour events are organized in the city in June, specializing in snacks made with local produce that will literally make you “eat olot bit by bit”.

You will probably be offered:

Ratafia d’Olo: a liqueur made from brandy, green nuts, herbs and spices. A sweet drink with beneficial digestive properties.

Coca de llardons and tortilla de matafaluga d’Olot: prepared in the traditional way, as the recipes have been passed down from parents to children from generation to generation.

Olot sausage or egg sausage, made from pork. The most famous is the so-called “whip from Olot”.

Potatoes from Olot: it has become one of the most famous and recognized dishes of the volcanic cuisine in La Garrotxa. This is a sliced potato stuffed with meat, baked in flour with an egg.

The most famous product made from buckwheat is porridge, which can be fried in oil and sweetened with sugar, honey or ratafia.

The city has one restaurant with two Michelin stars:

Trade in Olot has more than 300 establishments offering quality goods and services in the city center; some shops have more than a century of history. The city’s mall has evolved into a large outdoor shopping area, offering quality products and guaranteeing a friendly atmosphere.

Next to the Church of San Esteve, there is Plaça Mercat and the Olot shopping center, which have a variety of shops, which, in particular, are distinguished by the sale of handmade delicacies: sausages and bread baked in a wood-fired oven.