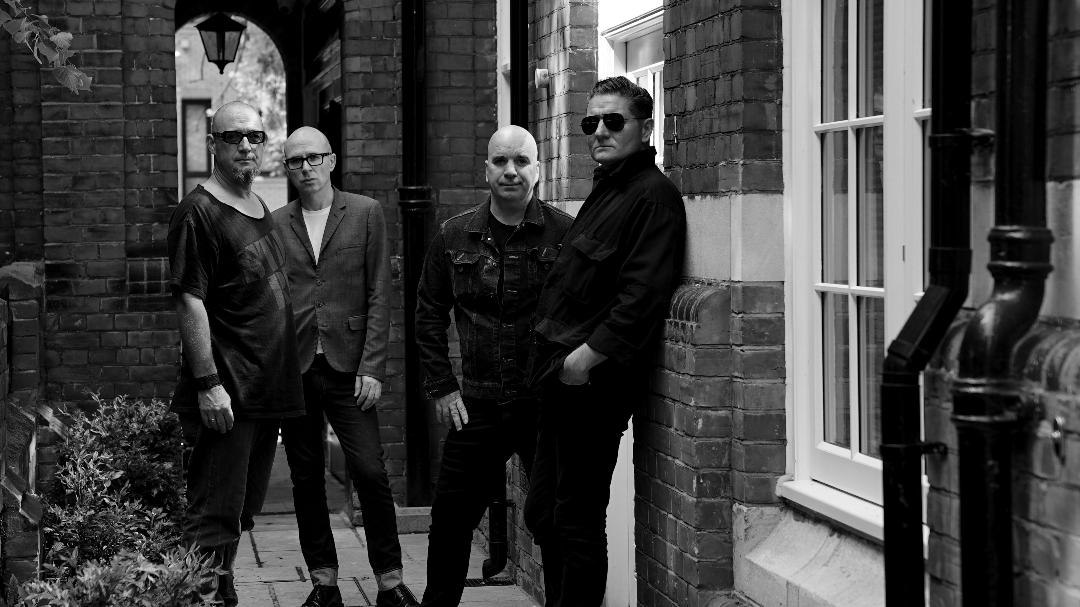 Douglas McCarthy talks about the Nitzer Ebb reunion tour as well as plans for other musical projects, his friendship with Depeche Mode, the tense atmosphere in Thatcher’s England of the ‘80s, his political views, current lifestyle as well as his favorite shows and collaborations

Nitzer Ebb – one of the most influential bands for the electronic music scene is back on track with a big reunion tour. Their sound has had a big impact right from the beginning of the ‘80s till nowadays on the birth and development of genres such as EBM, industrial, techno and acid-house. On the wave of the new interest in rough and analog music, that is obviously in the air now, Nitzer Ebb’s classical albums started to sound up-to-date again. Old and new fans all over the world are energetically dancing all over the world at their sold-out shows all over the world.

The band was started in 1982 in Essex, the UK, by two school friends – singer Douglas McCarthy and drummer Bon Harris. The name Nitzer Ebb actually had no meaning, it was meant to sound German and was reflecting the band members passion for early German electro bands. Their original approach to creating music, as Douglas McCarthy mentioned in one of his interviews, was based on a principle of creating music with fusing rock energy, but without using guitars. Nitzer Ebb’s earlier sounds were heavily inspired by the UK post-punk scene and bands like Bauhaus, Killing, Siouxsie and the Banshees and on another hand, was impacted by electronic music pioneers like DAF, Die Krupps and Front 242. Such a combination formed the body of their unique sound -a combination of industrial rhythms, rough electronic effects, aggressive vocals and song lyrics with powerful and direct messages. It’s better to see and to hear it once, but without a doubt, Nitzer Ebb can be described as one of the most vigorous bands in the world, you can definitely feel waves of pure brutal energy coming down from the stage at their shows.

The band has such a powerful background with 5 studio albums, cult musical videos, tours with Depeche Mode and working with massive producers like Alan Wilder and George Clinton. The guys are now in their 50s and are still focused, сheerful and ready for action.

We had a chance to talk with Douglas McCarthy about Nitzer Ebb’s reunion tour, his other musical projects, friendship with Depeche Mode, tense atmosphere in Thatcher’s England of the 80s, political views, current lifestyle, as well as much more.

Hi Douglas! You are currently on the Nitzer Ebb reunion tour. Is it a nostalgic kind of tour performing only old and classic Nitzer Ebb songs, or will you be playing some new music too?

Hello. It’s somewhat nostalgic but we have reworked the classic tracks to create a more club vibe to the show. No new material.

Do you maybe have some plans to release some new Nitzer Ebb music, after many years of silence?

We’re not ruling anything out or in. First, we want to concentrate on the tour.

How is the tour going? Have you had any memorable gigs so far?

We haven’t officially started the tour but last December we did some warmup shows in London, Stockholm and Gothenburg. They were all great shows.

You are also involved in two other projects – Fixmer/McCarthy and band Black Line that you do with your partner Bon Harris and members of the legendary Skinny Puppy. What are the upcoming plans for these projects?

Black Line has just released a 7” vinyl of ‘Sedition’ from the album ‘Treason, Sedition, and Subversive Activities’. It includes a rerecording acoustic version that Bon came up with whilst we were rehearsing in Krakow for the Depeche Mode tour we opened on.

Fixmer/McCarthy are also releasing an EP, ‘Let it Begin’. FM are playing Elsewhere in Brooklyn, NY on Saturday, April 27th.

You have supported Depeche Mode’s tours many times with Black Line and Nitzer Ebb. As I understand, you have a long time friendship them?

When Nitzer Ebb signed to Mute Records, the label owner, Daniel Miller, was very keen that we open for the Depeche Mode Music For The Masses tour. We were quite uncomfortable about doing it and took a lot of persuading. As soon as we saw the show we were blown away and very quickly became close friends with the band. We have a similar background growing up in Essex and it was like meeting old friends from the beginning.

Nitzer Ebb is meant to be a favorite band for followers of different radical political movements. You are loved by the right-wing and left-wing, football hooligans and these kinds of people. In your early days, you used some communist symbols on your covers and in the videos. Anyway, the band was always associated with something extreme. What are your real personal political views, to which ideology, social and political system do you agree with?

When we started the band in the early 1980’s the UK was an extremely politically charged place to live. It was impossible not to feel that tension everywhere you went. There were riot police waiting in vans through the country, extreme right-wing marches, anti-nazi protesters. Basically a lot of violence. Reagan and Thatcher were constantly antagonizing the Soviet Union as they were antagonizing in return. It did not seem unlikely that there would be a nuclear war. We were drawn to totalitarian imagery and slogans. Partly as a release of our own anxieties and partly to provoke a reaction from people. Our personal politics has always been pro-democracy and left-leaning and remains so.

Nitzer Ebb’s sound has changed during the band’s history. The first albums in the ‘80s were a perfect example of rough EBM, electronic analog music. Then in the ‘90s, you changed the direction and started to play more slow and rocky music with a lot of guitars. What is your favorite Nitzer Ebb period at the moment, which represents more in your opinion the band’s spirit?

Whenever we finished an album we were itching to explore a new direction, so consequently, there are a variety of styles and approaches. We have never felt confined by what other people expected of us, even our fans. Somethings worked better than others but the overall collection of work is a good reflection of our musical tastes. Namely varied and experimental.

Nitzer Ebb has collaborated a lot with different great artists like Alan Wilder, Barry Adamson, George Clinton. Do you have some favorite collaborations?

Again, all have their high points for us but we worked quite extensively with Alan Wilder as he co-produced the Ebbhead album with Flood so he definitely put more of a mark on our overall sound.

Alan Wilder as he co-produced the Ebbhead album, so he definitely put more of a mark on our overall sound

In your early days you liked to demonstrate your good physical shape and active style of life on stage and in videos like “Murderous” and “Let Your Body Learn”. Are you still really into sport?

Only watching it from the couch! We attempt to stay fit and healthy as touring can be physically and emotionally grueling. We watch what we eat and try to drink in moderation as well as some additional exercise beyond the shows.

As well as some additional exercise beyond the shows

What is your lifestyle like at the moment? How you usually spend time daily when you are free from touring?

I live in Downtown Los Angeles so tend to walk to most things. Cyrusrex’ studio is a couple of blocks away so we often meet there for Black Line. I like hiking in the nearby mountains, bike riding, taking our dumb dog for walks. It’s a pretty relaxed lifestyle.

You traveled with your bands a lot all over the world. Do you have some favorite places where you like to perform most of all?

Oooh, that’s a toughie! At this point in our career, I honestly enjoy everywhere we play. I like playing in places where I have a lot of friends so NYC, London, Berlin, Mexico City and Barcelona are always nice to play.

Have you ever been to Andorra and would you like to perform in Andorra if there would ever be the possibility to do so?

Never have but would love to!

We hope to see you someday here and thank you very much for the interesting interview Douglas.