The Head of Government of Andorra Antoni Marti welcomed the new French Ambassador to the Principality of Andorra Jocelyne Caballero • All PYRENEES · France, Spain, Andorra 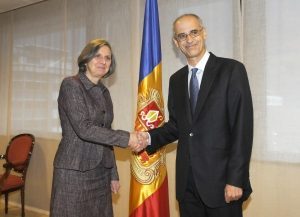 The Head of Government of Andorra Antoni Marti welcomed the new French Ambassador to the Principality of Andorra Jocelyne Caballero, who took the office 23d November, 2016. Her predecessor Ginette de Matha left the office in connection with the expiration of the contract period.

“The parts discussed the political and economic relations of Andorra and France, and paid special attention to issues relating to cross-border relations. The parts also discussed the culture and education collaboration”, reports the Government of Andorra.

Antoni Marti and Jocelyne Caballero also discussed the forthcoming establishment of the Association of Andorra with the European Union. The Head of Government of Andorra informed Jocelyne Caballero on recent meetings with representatives of European authorities, as well as the internal measures taken by the Government to establish this Association.

Anthony Martin thanked the Ambassador for the support of France in the negotiations.

Jocelyne Caballero was born 28th March, 1959. She has the honorary title of Knight of the National Order of Merit (2008) and Knight of the Legion of Honour (2012). She graduated from the Institute of Political Studies of Paris (1979), Bachelor of History at the University of Paris-Sorbonne (1981). Among her recent jobs: General Consul in Antwerp (2003-2008), Ambassador to the Coordination bodies of international efforts to combat piracy (2010-2013), Ambassador, Permanent Representative of France to the Council of Europe (2013-2016).